Caffeine, a central nervous system stimulant, is an odorless white crystalline powder or granule, with a bitter taste. It is sparingly soluble in water and ethanol at room temperature. The chemical name of caffeine is 3,7-dihydro-1,3,7-trimethyl-1H-purine-2,6-dione. In the presence of citric acid it forms caffeine citrate salt in solution. The structural formula and molecular weight of caffeine citrate follows. 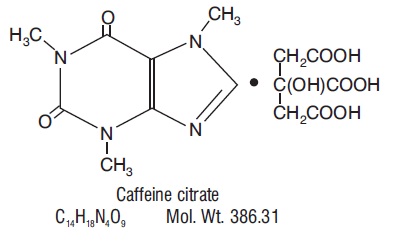 Caffeine is structurally related to other methylxanthines, theophylline, and theo­bromine. It is a bronchial smooth muscle relaxant, a CNS stimulant, a cardiac muscle stimulant, and a diuretic.


Although the mechanism of action of caffeine in apnea of prematurity is not known, several mechanisms have been hypothesized. These include: (1) stimu­lation of the respiratory center, (2) increased minute ventilation, (3) decreased threshold to hypercapnia, (4) increased response to hypercapnia, (5) increased skeletal muscle tone, (6) decreased diaphragmatic fatigue, (7) increased meta­bolic rate, and (8) increased oxygen consumption.


Most of these effects have been attributed to antagonism of adenosine recep­tors, both A1 and A2 subtypes, by caffeine, which has been demonstrated in receptor binding assays and observed at concentrations approximating those achieved therapeutically.

Absorption: After oral administration of 10 mg caffeine base/kg to preterm neonates, the peak plasma level (Cmax) for caffeine ranged from 6 to 10 mg/L and the mean time to reach peak concentration (Tmax) ranged from 30 minutes to 2 hours. The Tmax was not affected by formula feeding. The absolute bioavail­ability, however, was not fully examined in preterm neonates.

Distribution: Caffeine is rapidly distributed into the brain. Caffeine levels in the cerebrospinal fluid of preterm neonates approximate their plasma levels. The mean volume of distribution of caffeine in infants (0.8 to 0.9 L/kg) is slightly high­er than that in adults (0.6 L/kg). Plasma protein binding data are not available for neonates or infants. In adults, the mean plasma protein binding in vitro is reported to be approximately 36%.


Metabolism: Hepatic cytochrome P450 1A2 (CYP1A2) is involved in caffeine biotransformation. Caffeine metabolism in preterm neonates is limited due to their immature hepatic enzyme systems.


Elimination: In young infants, the elimination of caffeine is much slower than that in adults due to immature hepatic and/or renal function. Mean half-life (T1/2) and fraction excreted unchanged in urine (Ae) of caffeine in infants have been shown to be inversely related to gestational/postconceptual age. In neonates, the T1/2 is approximately 3-4 days and the Ae is approximately 86% (within 6 days). By 9 months of age, the metabolism of caffeine approximates that seen in adults (T1/2 = 5 hours and Ae = 1%).

Caffeine citrate injection and caffeine citrate oral solution are indicated for the short term treatment of apnea of prematurity in infants between 28 and <33 weeks gestational age.

Caffeine citrate injection and caffeine citrate oral solution are contraindicated in patients who have demonstrated hypersensitivity to any of its components.

During the double-blind, placebo-controlled clinical trial, 6 cases of necro­tizing enterocolitis developed among the 85 infants studied (caffeine=46, placebo=39), with 3 cases resulting in death. Five of the six patients with necrotizing enterocolitis were randomized to or had been exposed to caffeine citrate.


Caffeine is a central nervous system stimulant and in cases of caffeine over­dose, seizures have been reported. Caffeine citrate should be used with caution in infants with seizure disorders.


The duration of treatment of apnea of prematurity in the placebo-controlled trial was limited to 10 to 12 days. The safety and efficacy of caffeine citrate for longer periods of treatment have not been established. Safety and efficacy of caffeine citrate for use in the prophylactic treatment of sudden infant death syndrome (SIDS) or prior to extubation in mechanically ventilated infants have also not been established.


In the placebo-controlled clinical trial, caffeine levels ranged from 8 to 40 mg/L. A therapeutic plasma concentration range of caffeine could not be determined from the placebo-controlled clinical trial. Serious toxicity has been reported in the literature when serum caffeine levels exceed 50 mg/L. Serum concentra­tions of caffeine may need to be monitored periodically throughout treatment to avoid toxicity.

In clinical studies reported in the literature, cases of hypoglycemia and hyper­glycemia have been observed. Therefore, serum glucose may need to be peri­odically monitored in infants receiving caffeine citrate.


Few data exist on drug interactions with caffeine in preterm neonates. Based on adult data, lower doses of caffeine may be needed following coadministra­tion of drugs which are reported to decrease caffeine elimination (e.g., cimeti­dine and ketoconazole) and higher caffeine doses may be needed following coadministration of drugs that increase caffeine elimination (e.g., phenobarbi­tal and phenytoin).


Caffeine administered concurrently with ketoprofen reduced the urine volume in four healthy volunteers. The clinical significance of this interaction in preterm neonates is not known.


Interconversion between caffeine and theophylline has been reported in preterm neonates. The concurrent use of these drugs is not recommended.


Caffeine (as caffeine base) increased the sister chromatid exchange (SCE) SCE/cell metaphase (exposure time dependent) in an in vivo mouse metaphase analysis. Caffeine also potentiated the genotoxicity of known mutagens and enhanced the micronuclei formation (5-fold) in folate-deficient mice. However, caffeine did not increase chromosomal aberrations in in vitro Chinese hamster ovary cell (CHO) and human lymphocyte assays and was not mutagenic in an in vitro CHO/hypoxanthine guanine phosphoribosyltransferase (HGPRT) gene mutation assay, except at cytotoxic concentrations. In addition, caffeine was not clastogenic in an in vivo mouse micronucleus assay.


Caffeine (as caffeine base) administered to male rats at 50 mg/kg/day subcu­taneously (approximately equal to the maximum recommended intravenous loading dose for infants on a mg/m2 basis) for 4 days prior to mating with untreated females, caused decreased male reproductive performance in addi­tion to causing embryotoxicity. In addition, long-term exposure to high oral doses of caffeine (3 g over 7 weeks) was toxic to rat testes as manifested by spermatogenic cell degeneration.


Three of the infants who developed necrotizing enterocolitis during the trial died. All had been exposed to caffeine. Two were randomized to caffeine, and one placebo patient was “rescued” with open-label caffeine for uncontrolled apnea.

Following overdose, serum caffeine levels have ranged from approximately 24 mg/L (a post marketing spontaneous case report in which an infant exhibited irritability, poor feeding and insomnia) to 350 mg/L. Serious toxicity has been associated with serum levels greater than 50 mg/L (see PRECAUTIONS-Laboratory Tests and DOSAGE AND ADMINISTRATION). Signs and symptoms reported in the literature after caffeine overdose in preterm infants include fever, tachypnea, jitteriness, insomnia, fine tremor of the extremities, hypertonia, opisthotonos, tonic-clonic movements, nonpurposeful jaw and lip movements, vomiting, hyperglycemia, elevated blood urea nitrogen, and ele­vated total leukocyte concentration. Seizures have also been reported in cases of overdose. One case of caffeine overdose complicated by development of intraventricular hemorrhage and long-term neurological sequelae has been reported. Another case of caffeine citrate overdose (from New Zealand) of an estimated 600 mg caffeine citrate (approximately 322 mg/kg) administered over 40 minutes was complicated by tachycardia, ST depression, respiratory distress, heart failure, gastric distention, acidosis and a severe extravasation burn with tissue necrosis at the peripheral intravenous injection site. No deaths associated with caffeine overdose have been reported in preterm infants.


Treatment of caffeine overdose is primarily symptomatic and supportive. Caffeine levels have been shown to decrease after exchange transfusions. Convulsions may be treated with intravenous administration of diazepam or a barbiturate such as pentobarbital sodium.

To test for drug compatibility with common intravenous solutions or medica­tions, 20 mL of caffeine citrate injection were combined with 20 mL of a solution or medication, with the exception of an Intralipid® admixture, which was combined as 80 mL/80 mL. The physical appearance of the com­bined solutions was evaluated for precipitation. The admixtures were mixed for 10 minutes and then assayed for caffeine. The admixtures were then continu­ally mixed for 24 hours, with further sampling for caffeine assays at 2, 4, 8, and 24 hours.


Based on this testing, caffeine citrate injection, 60 mg/3 mL is chemically stable for 24 hours at room temperature when combined with the following test products.


Preservative free. For single use only. Discard unused portion.


ATTENTION PHARMACIST: Detach “Instructions for Use” from the package insert and dispense with caffeine citrate oral solution prescription.


Information and Instructions for Use


After you remove your baby’s dose, throw away the open bottle (vial) and all medicine left in it. Use each vial of caffeine citrate oral solution for only one dose. There will be extra medicine left in the vial after one dose is removed. Leftover medicine should not be used because caffeine citrate oral solution does not contain preservatives. Once the vial is open, any medicine that is not used right away must be discarded.


If your baby continues to have periods of apnea, call your baby’s doctor right away.

Caffeine citrate oral solution does NOT contain any preservatives. Do not open the vial until it is time for your baby to receive the dose of medicine. Use each vial only once. After you remove your baby’s dose, throw away the vial and all medicine left in the opened vial.


To open the child-resistant container that holds the vials of caffeine citrate oral solution:


To open a vial of caffeine citrate oral solution:


To remove the prescribed dose from the vial:

What are possible side effects of caffeine citrate?

Your baby may or may not develop side effects from taking caffeine citrate. Each baby is different. If your baby develops one or more of the following symptoms, speak with your baby’s doctor right away:


The following symptoms may be caused by serious bowel or stomach problems. Call your baby’s doctor right away if your baby develops: 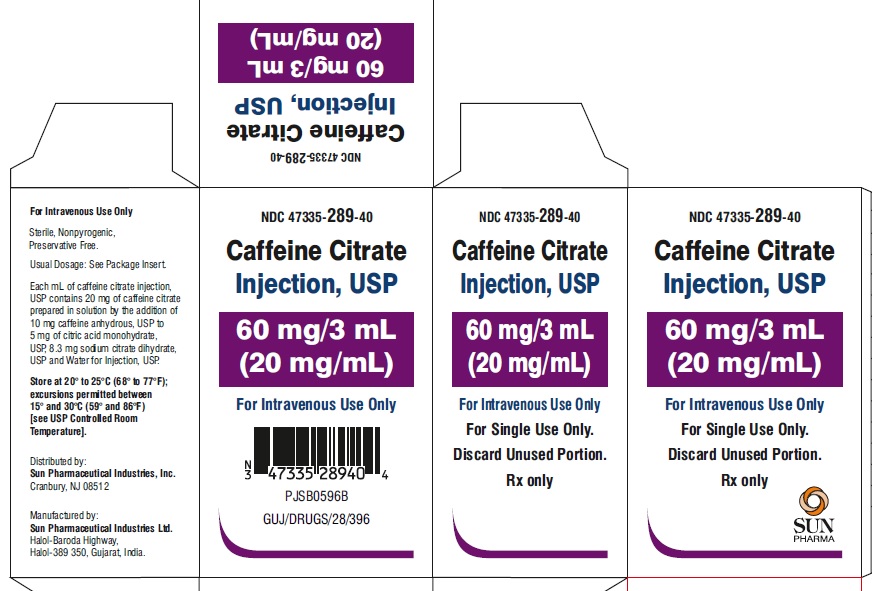