Adenosine is an endogenous nucleoside occurring in all cells of the body.  It is chemically 6-amino-9-β-D-ribofuranosyl-9-H-purine and has the following structural formula: 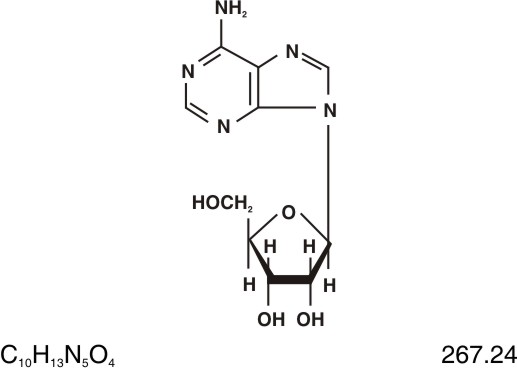 Adenosine is a white, odorless crystalline powder.  It is soluble in water and practically insoluble in alcohol. Solubility increases by warming and lowering the pH. Adenosine is not chemically related to other antiarrhythmic drugs.  Adenosine injection, USP is a sterile, nonpyrogenic solution for rapid bolus intravenous injection. Each mL contains 3 mg adenosine and 9 mg sodium chloride in Water for Injection.  The pH of the solution is between 4.5 and 7.5.

Intravenously administered adenosine is rapidly cleared from the circulation via cellular uptake, primarily by erythrocytes and vascular endothelial cells.  This process involves a specific transmembrane nucleoside carrier system that is reversible, nonconcentrative, and bidirectionally symmetrical.  Intracellular adenosine is rapidly metabolized either via phosphorylation to adenosine monophosphate by adenosine kinase, or via deamination to inosine by adenosine deaminase in the cytosol.  Since adenosine kinase has a lower Km and Vmax than adenosine deaminase, deamination plays a significant role only when cytosolic adenosine saturates the phosphorylation pathway.  Inosine formed by deamination of adenosine can leave the cell intact or can be degraded to hypoxanthine, xanthine, and ultimately uric acid.  Adenosine monophosphate formed by phosphorylation of adenosine is incorporated into the high-energy phosphate pool.  While extracellular adenosine is primarily cleared by cellular uptake with a half-life of less than 10 seconds in whole blood, excessive amounts may be deaminated by an ecto-form of adenosine deaminase. As adenosine injection requires no hepatic or renal function for its activation or inactivation, hepatic and renal failure would not be expected to alter its effectiveness or tolerability.

In controlled studies in the United States, bolus doses of 3, 6, 9, and 12 mg were studied. A cumulative 60% of patients with paroxysmal supraventricular tachycardia had converted to normal sinus rhythm within one minute after an intravenous bolus dose of 6 mg adenosine (some converted on 3 mg and failures were given 6 mg), and a cumulative 92% converted after a bolus dose of 12 mg. Seven to sixteen percent of patients converted after 1 to 4 placebo bolus injections.  Similar responses were seen in a variety of patient subsets, including those using or not using digoxin, those with Wolff-Parkinson-White Syndrome, males, females, blacks, Caucasians, and Hispanics.

Intravenous adenosine injection is indicated for the following.

It is important to be sure the adenosine solution actually reaches the systemic circulation (see DOSAGE AND ADMINISTRATION).1

Adenosine injection exerts its effect by decreasing conduction through the A-V node and may produce a short lasting first-, second- or third degree heart block. Appropriate therapy should be instituted as needed.  Patients who develop high-level block on one dose of adenosine should not be given additional doses.  Because of the very short half-life of adenosine, these effects are generally self-limiting. Appropriate resuscitative measures should be available.

Transient or prolonged episodes of asystole have been reported with fatal outcomes in some cases. Rarely, ventricular fibrillation has been reported following adenosine injection administration, including both resuscitated and fatal events. In most instances, these cases were associated with the concomitant use of digoxin and, less frequently with digoxin and verapamil. Although no causal relationship or drug-drug interaction has been established, adenosine should be used with caution in patients receiving digoxin or digoxin and verapamil in combination.

Adenosine injection is a respiratory stimulant (probably through activation of carotid body chemoreceptors) and intravenous administration in man has been shown to increase minute ventilation (Ve) and reduce arterial PCO2 causing respiratory alkalosis.

Intravenous adenosine injection has been effectively administered in the presence of other cardioactive drugs, such as quinidine, beta-adrenergic blocking agents, calcium channel blocking agents, and angiotensin converting enzyme inhibitors, without any change in the adverse reaction profile.  Digoxin and verapamil use may be rarely associated with ventricular fibrillation when combined with adenosine injection (see WARNINGS). Because of the potential for additive or synergistic depressant effects on the SA and AV nodes, however, adenosine injection should be used with caution in the presence of these agents.  The use of adenosine injection in patients receiving digitalis may be rarely associated with ventricular fibrillation (see WARNINGS).

Studies in animals have not been performed to evaluate the carcinogenic potential of adenosine injection. Adenosine was negative for genotoxic potential in the Salmonella (Ames Test) and Mammalian Microsome Assay.

Animal reproduction studies have not been conducted with adenosine; nor have studies been performed in pregnant women.  As adenosine is a naturally occurring material, widely dispersed throughout the body, no fetal effects would be anticipated. However, since it is not known whether adenosine can cause fetal harm when administered to pregnant women, adenosine should be used during pregnancy only if clearly needed.

Clinical studies of adenosine injection did not include sufficient numbers of subjects aged 65 and over to determine whether they respond differently from younger subjects. Other reported clinical experience has not identified differences in responses between elderly and younger patients.  In general, adenosine injection in geriatric patients should be used with caution since this population may have a diminished cardiac function, nodal dysfunction, concomitant diseases or drug therapy that may alter hemodynamic function and produce severe bradycardia or AV block.

The following reactions were reported with intravenous adenosine injection used in controlled U.S. clinical trials. The placebo group had less than 1% rate of all of these reactions.

The following adverse events have been reported from marketing experience with adenosine injection. Because these events are reported voluntarily from a population of uncertain size, are associated with concomitant diseases and multiple drug therapies and surgical procedures, it is not always possible to reliably estimate their frequency or establish a causal relationship to drug exposure. Decisions to include these events in labeling are typically based on one or more of the following factors: (1) seriousness of the event, (2) frequency of the reporting, (3) strength of causal connection to the drug, or a combination of these factors.

The half-life of adenosine injection is less than 10 seconds. Thus, adverse effects are generally rapidly self-limiting.  Treatment of any prolonged adverse effects should be individualized and be directed toward the specific effect. Methylxanthines, such as caffeine and theophylline, are competitive antagonists of adenosine.

The dose recommendation is based on clinical studies with peripheral venous bolus dosing.  Central venous (CVP or other) administration of adenosine injection has not been systematically studied.

Initial dose:  6 mg given as a rapid intravenous bolus (administered over a 1 to 2 second period).

Repeat administration:  If the first dose does not result in elimination of the supraventricular tachycardia within 1 to 2 minutes, 12 mg should be given as a rapid intravenous bolus.  This 12 mg dose may be repeated a second time if required.

Initial dose:  Give 0.05 to 0.1 mg/kg as a rapid IV bolus given either centrally or peripherally. A saline flush should follow.

CAUTION: Product-Connector Incompatibility Notice:
Certain Needleless IV sets with Luer-Activated Devices (LADs) may be incompatible with Wockhardt’s syringe. Some LADs that are incompatible with this syringe include the Clave® needle-free IV devices. While the Wockhardt’s syringes may be connected to these LADs successfully, the physical incompatibility caused by the luer tip diameter significantly impairs or even prevents administration of the drug.
BD Q-SyteTM adaptor or other suitable adaptor are required for use with LADs such as CLAVE® systems.
BD Q-SYTETM is a trademark of Becton, Dickinson and Company.
CLAVE® is a registered trademark of ICU Medical, Inc.

Adenosine injection, USP is supplied as a sterile non-pyrogenic solution in normal saline in the following configurations: 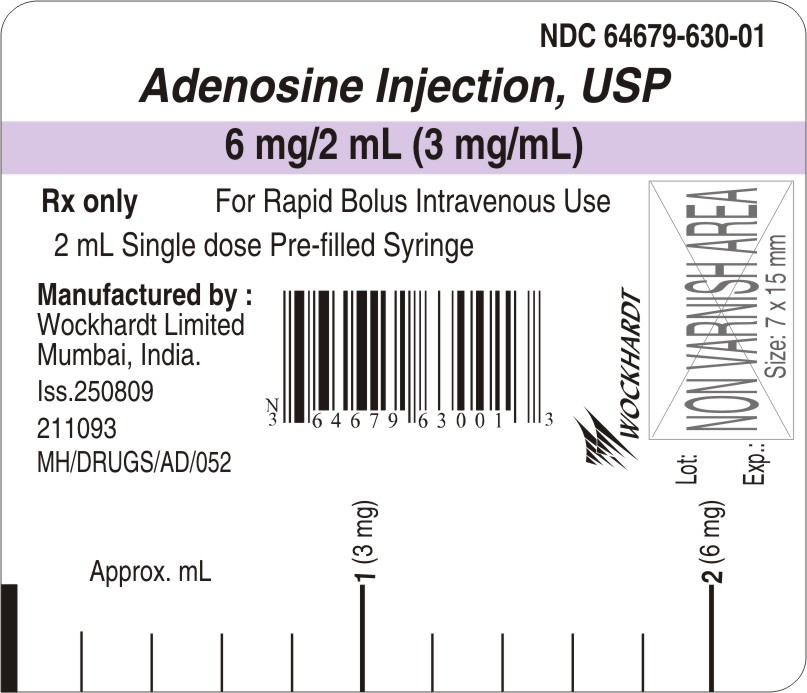 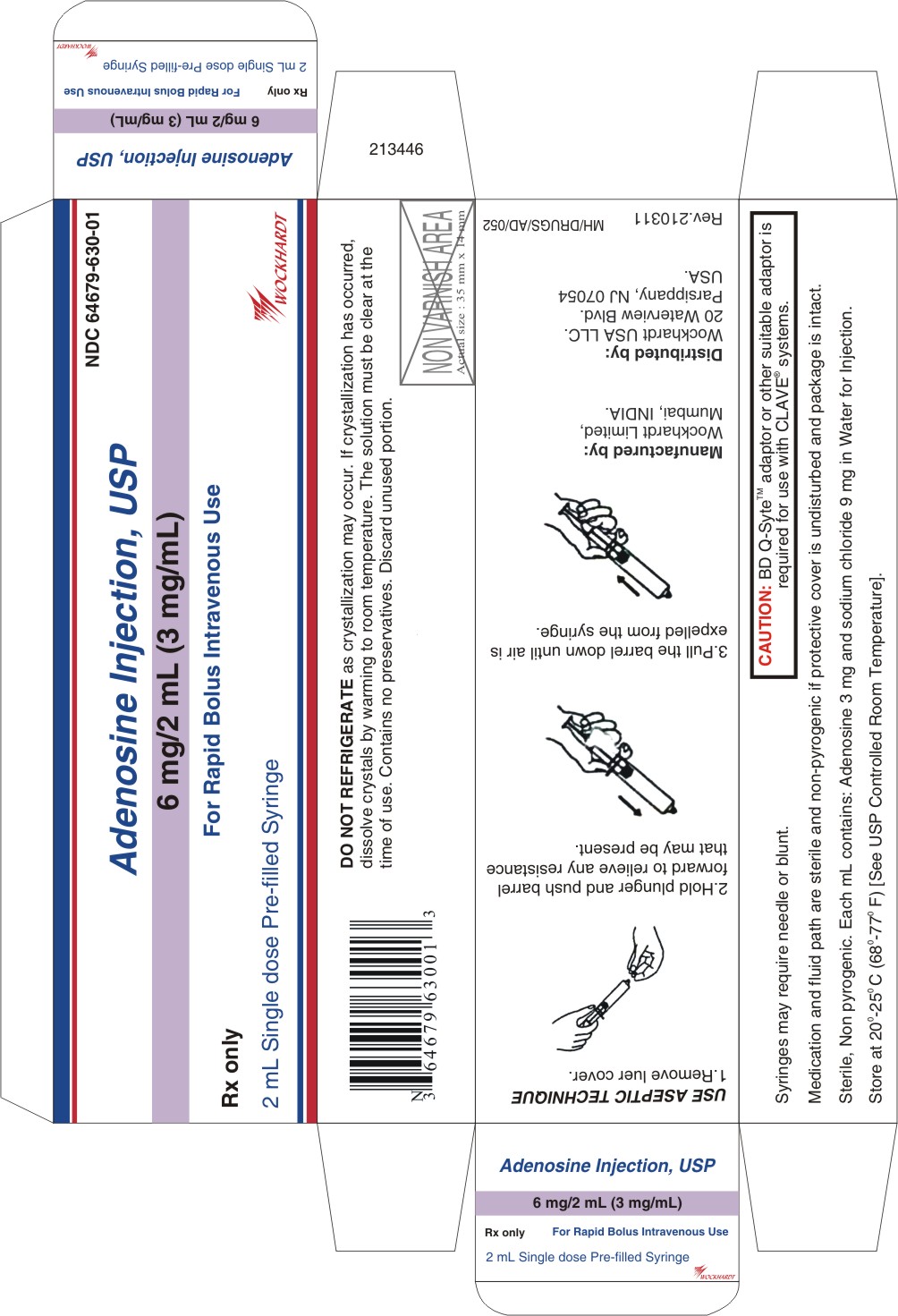 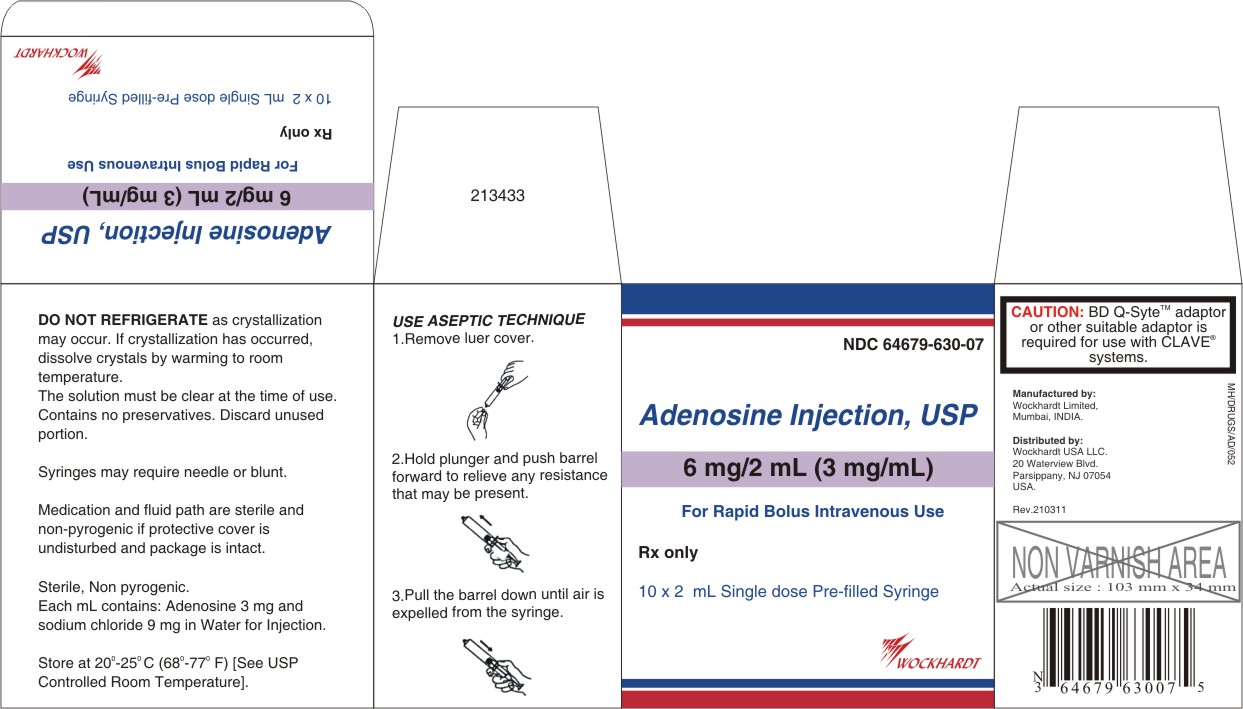 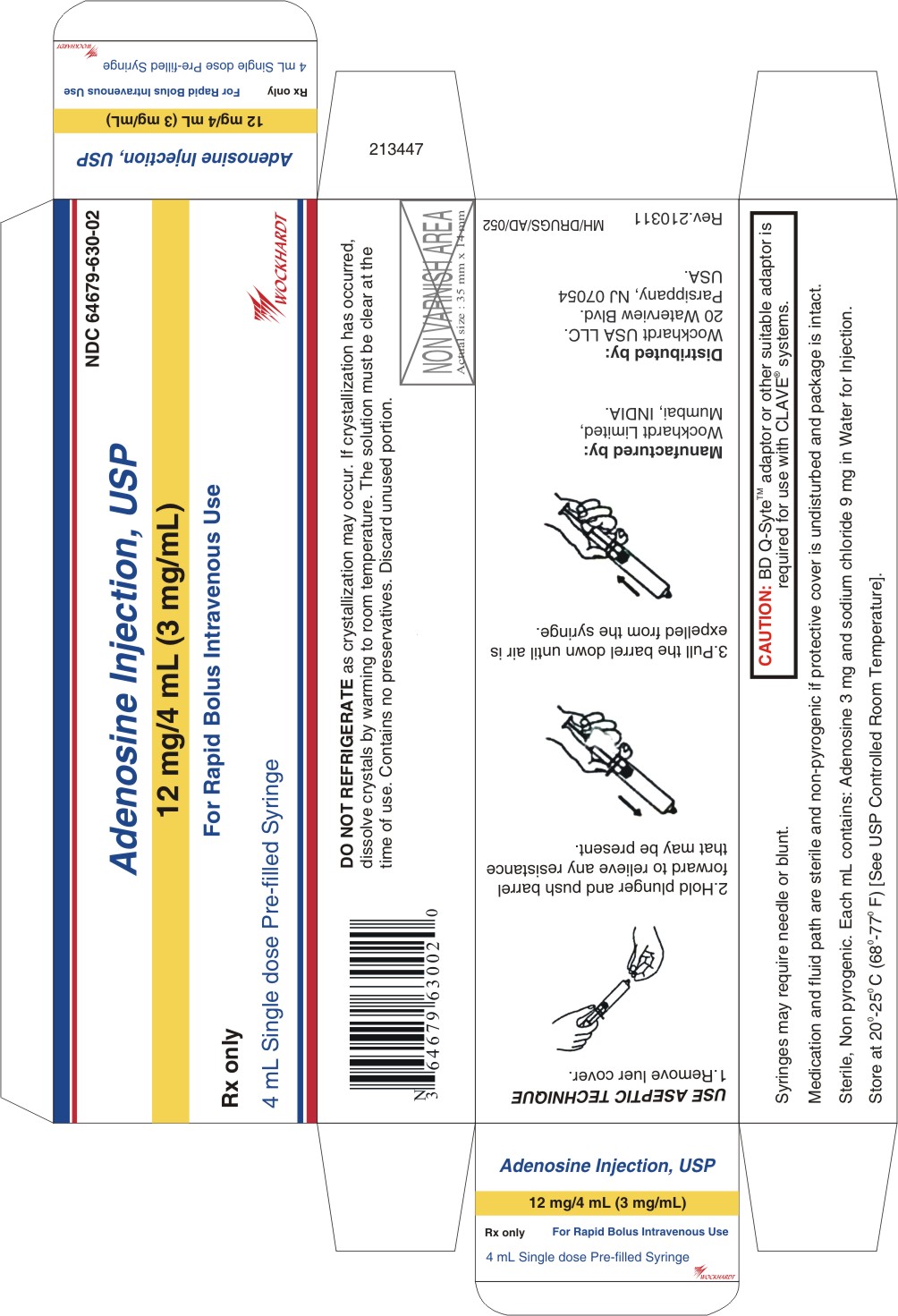