FOR INTRA-ARTERIAL INFUSION ONLY

Floxuridine for Injection, USP, an antineoplastic antimetabolite, is available as a sterile, nonpyrogenic, lyophilized powder for reconstitution.  Each vial contains 500 mg of floxuridine which is to be reconstituted with 5 mL of sterile water for injection.  An appropriate amount of reconstituted solution is then diluted with a parenteral solution for intra-arterial infusion (see DOSAGE AND ADMINISTRATION).

Floxuridine is a fluorinated pyrimidine. Chemically, floxuridine is 2’-deoxy-5-fluorouridine.  It is a white to off-white odorless solid which is freely soluble in water.  The 2% aqueous solution has a pH of between 4.0 and 5.5. 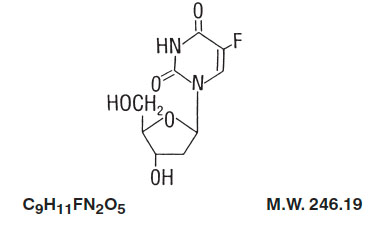 When floxuridine is given by rapid intra-arterial injection it is apparently rapidly catabolized to 5-fluorouracil.  Thus, rapid injection of floxuridine produces the same toxic and antimetabolic effects as does 5-fluorouracil.  The primary effect is to interfere with the synthesis of deoxyribonucleic acid (DNA) and to a lesser extent inhibit the formation of ribonucleic acid (RNA).  However, when floxuridine is given by continuous intra-arterial infusion its direct anabolism to floxuridine-monophosphate is enhanced, thus increasing the inhibition of DNA.

Floxuridine for Injection, USP is effective in the palliative management of gastrointestinal adenocarcinoma metastatic to the liver, when given by continuous regional intra-arterial infusion in carefully selected patients who are considered incurable by surgery or other means.  Patients with known disease extending beyond an area capable of infusion via a single artery should, except in unusual circumstances, be considered for systemic therapy with other chemotherapeutic agents.

Floxuridine therapy is contraindicated for patients in a poor nutritional state, those with depressed bone marrow function or those with potentially serious infections.

BECAUSE OF THE POSSIBILITY OF SEVERE TOXIC REACTIONS, ALL PATIENTS SHOULD BE HOSPITALIZED FOR THE FIRST COURSE OF THERAPY.

Floxuridine should be used with extreme caution in poor risk patients with impaired hepatic or renal function or a history of high-dose pelvic irradiation or previous use of alkylating agents.  The drug is not intended as an adjuvant to surgery.

Floxuridine may cause fetal harm when administered to a pregnant woman.  It has been shown to be teratogenic in the chick embryo, mouse (at doses of 2.5 to 100 mg/kg) and rat (at doses of 75 to 150 mg/kg).  Malformations included cleft palates; skeletal defects; and deformed appendages, paws and tails.  The dosages which were teratogenic in animals are 4.2 to 125 times the recommended human therapeutic dose.

There are no adequate and well-controlled studies with floxuridine in pregnant women.  If this drug is used during pregnancy or if the patient becomes pregnant while taking (receiving) this drug, the patient should be apprised of the potential hazard to the fetus.  Women of childbearing potential should be advised to avoid becoming pregnant.

Any form of therapy which adds to the stress of the patient, interferes with nutrition or depresses bone marrow function will increase the toxicity of floxuridine.

Floxuridine is a highly toxic drug with a narrow margin of safety.  Therefore, patients should be carefully supervised since therapeutic response is unlikely to occur without some evidence of toxicity.  Severe hematological toxicity, gastrointestinal hemorrhage and even death may result from the use of floxuridine despite meticulous selection of patients and careful adjustment of dosage.  Although severe toxicity is more likely in poor risk patients, fatalities may be encountered occasionally even in patients in relatively good condition.

Therapy is to be discontinued promptly whenever one of the following signs of toxicity appears:

Leukopenia (WBC under 3,500) or a rapidly falling white blood count

Hemorrhage from any site

Careful monitoring of the white blood count and platelet count is recommended.

Oncogenic transformation of fibroblasts from mouse embryo has been induced in vitro by floxuridine, but the relationship between oncogenicity and mutagenicity is not clear.  Floxuridine has also been shown to be mutagenic in human leukocytes in vitro and in the Drosophila test system.  In addition, 5-fluorouracil, to which floxuridine is catabolized when given by intraarterial injection, has been shown to be mutagenic in in vitro tests.

The effects of floxuridine on fertility and general reproductive performance have not been studied in animals.  However, because floxuridine is catabolized to 5-fluorouracil, it should be noted that 5-fluorouracil has been shown to induce chromosomal aberrations and changes in chromosome organization of spermatogonia in rats at doses of 125 or 250 mg/kg, administered intraperitoneally.

Spermatogonial differentiation was also inhibited by fluorouracil, resulting in transient infertility.  In female rats, fluorouracil, administered intraperitoneally at doses of 25 or 50 mg/kg during the preovulatory phase of oogenesis, significantly reduced the incidence of fertile matings, delayed the development of pre- and post-implantation embryos, increased the incidence of preimplantation lethality and induced chromosomal anomalies in these embryos.  Compounds such as floxuridine, which interfere with DNA, RNA and protein synthesis, might be expected to have adverse effects on gametogenesis.

See WARNINGS.  Floxuridine has been shown to be teratogenic in the chick embryo, mouse (at doses of 2.5 to 100 mg/kg) and rat (at doses of 75 to 150 mg/kg).  Malformations included cleft palates, skeletal defects and deformed appendages, paws and tails.  The dosages which were teratogenic in animals are 3.2 to 125 times the recommended human therapeutic dose.

There are no adequate and well-controlled studies with floxuridine in pregnant women.  While there is no evidence of teratogenicity in humans due to floxuridine, it should be kept in mind that other drugs which inhibit DNA synthesis (eg, methotrexate and aminopterin) have been reported to be teratogenic in humans.  Floxuridine should be used during pregnancy only if the potential benefit justifies the potential risk to the fetus.

It is not known whether floxuridine is excreted in human milk. Because floxuridine inhibits DNA and RNA synthesis, mothers should not nurse while receiving this drug.

The following adverse reactions have not been reported with floxuridine but have been noted following the administration of 5-fluorouracil.  While the possibility of these occurring following floxuridine therapy is remote because of its regional administration, one should be alert for these reactions following the administration of floxuridine because of the pharmacological similarity of these two drugs: pancytopenia, agranulocytosis, myocardial ischemia, angina, anaphylaxis, generalized allergic reactions, acute cerebellar syndrome, nystagmus, headache, dry skin, fissuring, photosensitivity, pruritic maculopapular rash, increased pigmentation of the skin, vein pigmentation, lacrimal duct stenosis, visual changes, lacrimation, photophobia, disorientation, confusion, euphoria, epistaxis and nail changes, including loss of nails.

The possibility of overdosage with floxuridine is unlikely in view of the mode of administration.  Nevertheless, the anticipated manifestations would be nausea, vomiting, diarrhea, gastrointestinal ulceration and bleeding, bone marrow depression (including thrombocytopenia, leukopenia and agranulocytosis).  No specific antidotal therapy exists.  Patients who have been exposed to an overdosage of floxuridine should be monitored hematologically for at least 4 weeks.  Should abnormalities appear, appropriate therapy should be utilized.
The acute intravenous toxicity of floxuridine is as follows:

Each vial must be reconstituted with 5 mL of sterile water for injection to yield a solution containing approximately 100 mg of floxuridine/mL.  The calculated daily dose(s) of the drug is then diluted with 5% dextrose or 0.9% sodium chloride injection to a volume appropriate for the infusion apparatus to be used.  The administration of floxuridine is best achieved with the use of an appropriate pump to overcome pressure in large arteries and to ensure a uniform rate of infusion.

The recommended therapeutic dosage schedule of floxuridine by continuous arterial infusion is 0.1 to 0.6 mg/kg/day.  The higher dosage ranges (0.4 to 0.6 mg) are usually employed for hepatic artery infusion because the liver metabolizes the drug, thus reducing the potential for systemic toxicity.  Therapy can be given until adverse reactions appear.  (See PRECAUTIONS).  When these side effects have subsided, therapy may be resumed.  The patients should be maintained on therapy as long as response to floxuridine continues.

Procedures for proper handling and disposal of anticancer drugs should be considered.  Several guidelines on this subject have been published. 1-7  There is no general agreement that all of the procedures recommended in the guidelines are necessary or appropriate. 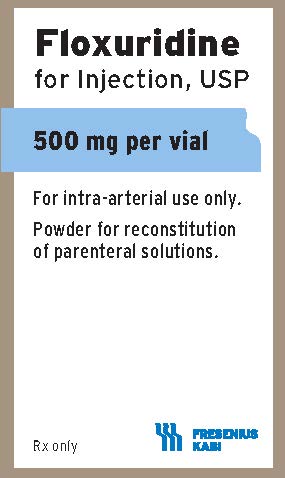