Aminocaproic acid, USP is 6-aminohexanoic acid, which acts as an inhibitor of fibrinolysis.

Aminocaproic acid, USP is soluble in water, acid, and alkaline solutions; it is sparingly soluble in methanol and practically insoluble in chloroform.

Renal excretion is the primary route of elimination. Sixty-five percent of the dose is recovered in the urine as unchanged drug and 11% of the dose appears as the metabolite adipic acid. Renal clearance (116 mL/min) approximates endogenous creatinine clearance. The total body clearance is 169 mL/min. The terminal elimination half-life for aminocaproic acid is approximately 2 hours.

Aminocaproic acid is useful in enhancing hemostasis when fibrinolysis contributes to bleeding. In life- threatening situations, transfusion of appropriate blood products and other emergency measures may be required.

Aminocaproic acid inhibits both the action of plasminogen activators and to a lesser degree, plasmin activity. The drug should NOT be administered without a definite diagnosis and/or laboratory finding indicative of hyperfibrinolysis (hyperplasminemia).1 Inhibition of fibrinolysis by aminocaproic acid may theoretically result in clotting or thrombosis. However, there is no definite evidence that administration of aminocaproic acid has been responsible for the few reported cases of intravascular clotting which followed this treatment. Rather, it appears that such intravascular clotting was most likely due to the patient's preexisting clinical condition, e.g., the presence of DIC. It has been postulated that extravascular clots formed in vivo may not undergo spontaneous lysis as do normal clots.

A dosage regimen may be followed by administering Aminocaproic acid Oral Solution as follows:

For the treatment of acute bleeding syndromes due to elevated fibrinolytic activity, it is suggested that 20 milliliter of Aminocaproic acid Oral Solution (5 g) be administered during the first hour of treatment, followed by a continuing rate of 5 milliliter of Aminocaproic acid Oral Solution (1.25 g) per hour. This method of treatment would ordinarily be continued for about 8 hours or until the bleeding situation has been controlled. 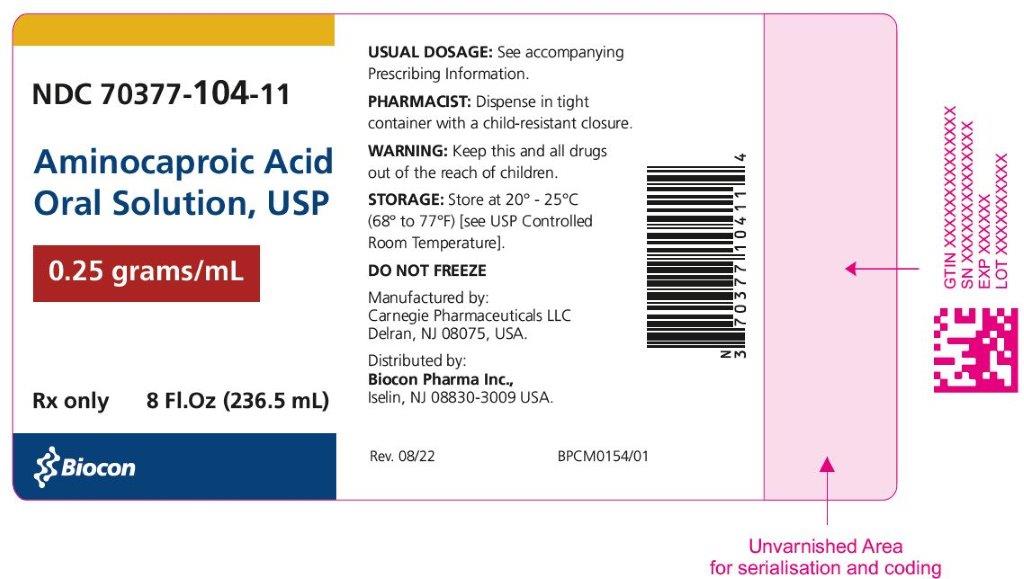