Levoleucovorin injection is a folate analog.

Levoleucovorin injection is also indicated to diminish the toxicity and counteract the effects of impaired methotrexate elimination and of inadvertent overdosage of folic acid antagonists.

Levoleucovorin injection is indicated for use in combination chemotherapy with 5-fluorouracil in the palliative treatment of patients with advanced metastatic colorectal cancer.

· Levoleucovorin injection is not approved for pernicious anemia and megaloblastic anemias secondary to the lack of vitamin B12.Improper use may cause a hematologic remission while neurologic manifestations continue to progress.

Levoleucovorin injection is dosed at one-half the usual dose of racemic d,l-leucovorin.

Levoleucovorin injection is indicated for intravenous administration only. Do not administer intrathecally.

2.2 Co-administration of Levoleucovorin with other agents

Due to the risk of precipitation, do not co-administer Levoleucovorin injection with other agents in the same admixture.

Patients who experience delayed early methotrexate elimination are likely to develop reversible renal failure. In addition to appropriate levoleucovorin injection therapy, these patients require continuing hydration and urinary alkalinization, and close monitoring of fluid and electrolyte status, until the serum methotrexate level has fallen to below 0.05 micromolar and the renal failure has resolved.

Delayed methotrexate excretion may be caused by accumulation in a third space fluid collection (i.e., ascites, pleural effusion), renal insufficiency, or inadequate hydration. Under such circumstances, higher doses of levoleucovorin injection or prolonged administration may be indicated.

The following regimens have been used historically for the treatment of colorectal cancer:

Levoleucovorin injection is contraindicated for patients who have had previous allergic reactions attributed to folic acid or folinic acid.

Because of the Ca++ content of the levoleucovorin solution, no more than 16 mL (160 mg of levoleucovorin) should be injected intravenously per minute.

5.2 Potential for Enhanced Toxicity with 5-Fluorouracil

Levoleucovorin injection enhances the toxicity of 5-fluorouracil. Deaths from severe enterocolitis, diarrhea, and dehydration have been reported in elderly patients receiving weekly d,l-leucovorin and 5-fluorouracil. When these drugs are administered concurrently in the palliative treatment of advanced colorectal cancer, the dosage of 5-FU must be lower than usually administered. Although the toxicities observed in patients treated with the combination of levoleucovorin injection and 5-FU are qualitatively similar to those observed with 5-FU alone, gastrointestinal toxicities (particularly stomatitis and diarrhea) are observed more commonly and may be of greater severity and of prolonged duration in patients treated with the combination.

In the first Mayo/NCCTG controlled trial, toxicity, primarily gastrointestinal, resulted in 7% of patients requiring hospitalization when treated with 5-FU alone or 5-FU in combination with 200 mg/m2 of d,l-leucovorin and 20% when treated with 5-FU in combination with 20 mg/m2 of d,l-leucovorin. In the second Mayo/NCCTG trial, hospitalizations related to treatment toxicity also appeared to occur more often in patients treated with the low dose d,l-leucovorin/5-FU combination than in patients treated with the high dose combination – 11% versus 3%. Therapy with levoleucovorin injection and 5-FU must not be initiated or continued in patients who have symptoms of gastrointestinal toxicity of any severity, until those symptoms have completely resolved. Patients with diarrhea must be monitored with particular care until the diarrhea has resolved, as rapid clinical deterioration leading to death can occur. In an additional study utilizing higher weekly doses of 5-FU and d,l-leucovorin, elderly and/or debilitated patients were found to be at greater risk for severe gastrointestinal toxicity.

Seizures and/or syncope have been reported rarely in cancer patients receiving d,l-leucovorin, usually in association with fluoropyrimidine administration, and most commonly in those with CNS metastases or other predisposing factors. However, a causal relationship has not been established.

5.3 Potential for interaction with trimethoprim-sulfamethoxazole

The concomitant use of d,l-leucovorin with trimethoprim-sulfamethoxazole for the acute treatment of Pneumocystis carinii pneumonia in patients with HIV infection was associated with increased rates of treatment failure and morbidity in a placebo-controlled study.

Since clinical trials are conducted under widely varying conditions, adverse reaction rates observed in the clinical trials of a drug cannot be directly compared to rates in the clinical trials of another drug and may not reflect the rates observed in practice. The following table presents the frequency of adverse reactions which occurred during the administration of 58 courses of high-dose methotrexate 12 grams/m2 followed by Levoleucovorin injection rescue for osteosarcoma in 16 patients age 6 to 21. Most patients received levoleucovorin injection 7.5 mg every 6 hours for 60 hours or longer beginning 24 hours after completion of methotrexate.

The incidence of adverse reactions may be underestimated because not all patients were fully evaluable for toxicity for all cycles in the clinical trials. Leukopenia and thrombocytopenia were observed, but could not be attributed to high-dose methotrexate with levoleucovorin injection rescue because patients were receiving other myelosuppressive chemotherapy.

6.2 Clinical Studies in Combination with 5-FU in Colorectal Cancer

Since adverse reactions from spontaneous reports are provided voluntarily from a population of uncertain size, it is not always possible to estimate reliably their frequency or establish a causal relationship to drug exposure. Spontaneously reported adverse reactions collected by the WHO Collaborating Center for International Drug Monitoring in Uppsala Sweden have yielded seven cases where levoleucovorin was administered with a regimen of methotrexate. The events were dyspnea, pruritus, rash, temperature change and rigors. For 217 adverse reactions (108 reports) where levoleucovorin was a suspected or interacting medication, there were 40 occurrences of “possible allergic reactions.”

In an analysis where calcium levoleucovorin injection was reported as the primary suspect drug and fluorouracil (FU) was reported as a concomitant medication, possible allergic reactions were reported among 47 cases (67 events).

Folic acid in large amounts may counteract the antiepileptic effect of phenobarbital, phenytoin and primidone, and increase the frequency of seizures in susceptible children. It is not known whether folinic acid has the same effects.

However, both folic and folinic acids share some common metabolic pathways. Caution should be taken when taking folinic acid in combination with anticonvulsant drugs.

Clinical studies of levoleucovorin injection in the treatment of osteosarcoma did not include subjects aged 65 and over to determine whether they respond differently from younger subjects.

In the NCCTG clinical trial of levoleucovorin injection in combination with 5-FU in advanced colorectal cancer, adverse reactions were consistent with 5-FU related toxicity and were similar for patients age 65 and older and for patients younger than age 65.

No data are available for overdosage with levoleucovorin.

Levoleucovorin Injection contain levoleucovorin calcium, which is one of several active, chemically reduced derivatives of folic acid. It is useful as antidote to the inhibition of dihydrofolate reductase by methotrexate. This compound has the chemical designation calcium (6S)-N-{4-[[(2-amino-5-formyl-1,4,5,6,7,8-hexahydro-4-oxo-6pteridinyl)methyl] amino]benzoyl}-L-glutamate pentahydrate. The molecular weight is 601.6 and the structural formula is:

No studies have been conducted to evaluate the potential of levoleucovorin for carcinogenesis, mutagenesis and impairment of fertility.

The acute intravenous LD50 values in adult mice and rats were 575 mg/kg (1725 mg/m2) and 378 mg/kg (2268 mg/m2), respectively. Signs of sedation, tremors, reduced motor activity, prostration, labored breathing, and/or convulsion were observed in these studies. Anticipated human dose for each administration is approximately 5 mg/m2 for high-dose methotrexate therapy which represents a 3-log safety margin.

14.2 Combination with 5-FU in Colorectal Cancer

In a randomized clinical study conducted by the Mayo Clinic and the North Central Cancer Treatment Group (Mayo/NCCTG) in patients with advanced metastatic colorectal cancer, three treatment regimens were compared: d,l-leucovorin (LV) 200 mg/m2 and 5-fluorouracil (5-FU) 370 mg/m2 versus LV 20 mg/m2 and 5-FU 425 mg/m2 versus 5-FU 500 mg/m2. All drugs were administered by slow intravenous infusion daily for 5 days repeated every 28 to 35 days. Response rates were 26% (p=0.04 versus 5-FU alone), 43% (p=0.001 versus 5-FU alone) and 10% for the high dose leucovorin, low dose leucovorin and 5-FU alone groups, respectively. Respective median survival times were 12.2 months (p=0.037), 12 months (p=0.050), and 7.7 months. The low dose LV regimen gave a statistically significant improvement in weight gain of more than 5%, relief of symptoms, and improvement in performance status. The high dose LV regimen gave a statistically significant improvement in performance status and trended toward improvement in weight gain and in relief of symptoms but these were not statistically significant.

Levoleucovorin is dosed at one-half the usual dose of racemic d,l-leucovorin. 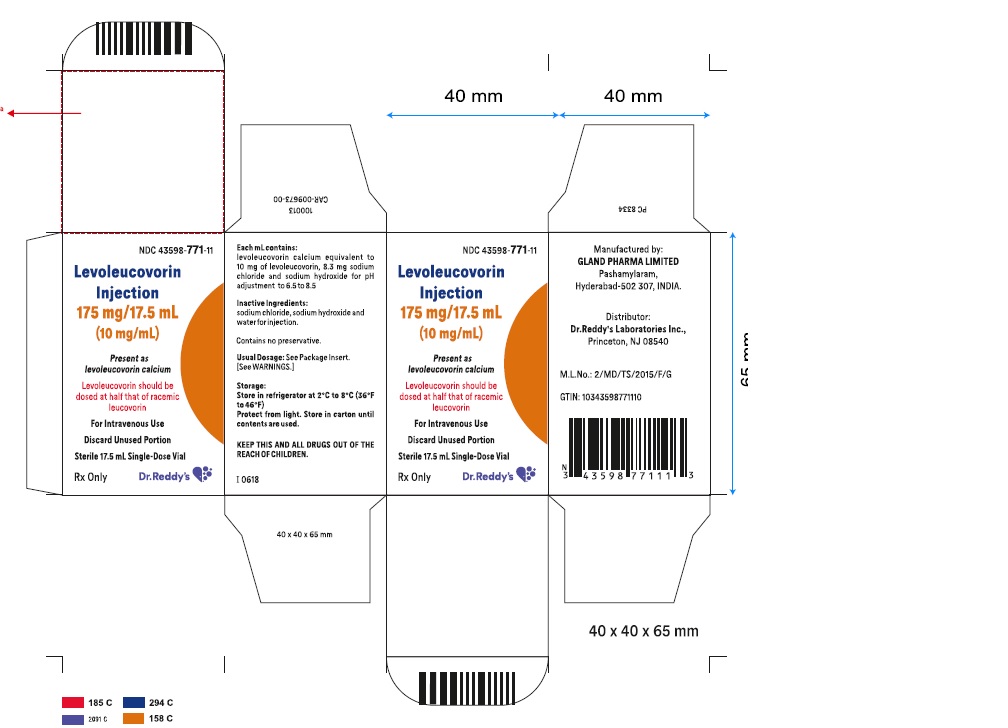 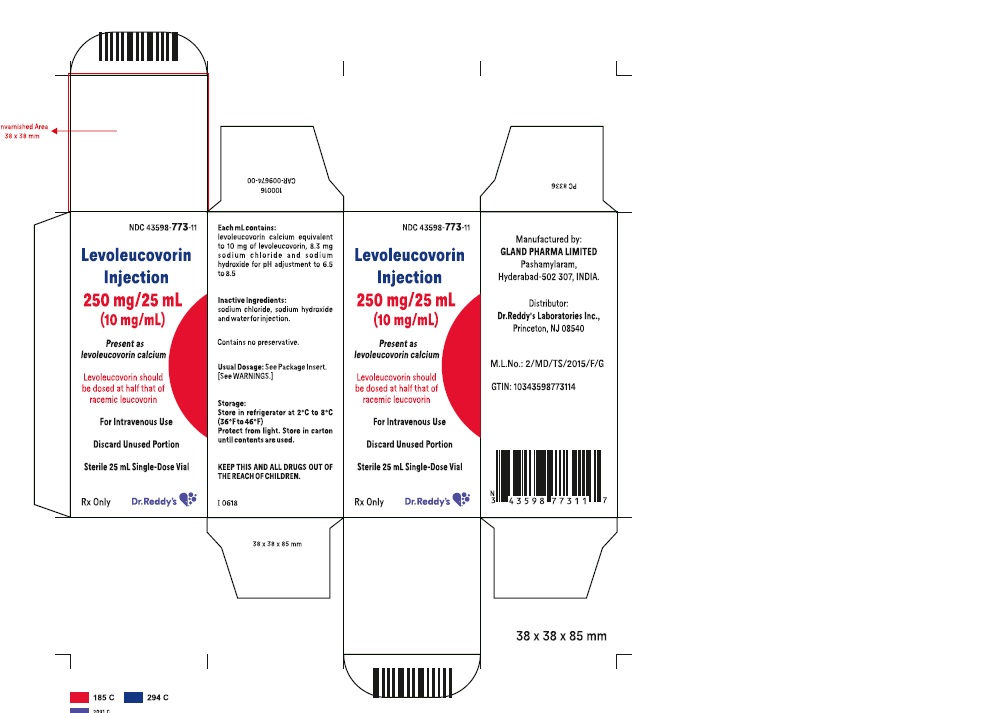