Chemically erythromycin is C37H67NO13. It has the following structural formula:

Erythromycin has the molecular weight of 733.94. It is a white crystalline powder and has a solubility of approximately 1 mg/mL in water and is soluble in alcohol at 25°C. Erythromycin-Benzoyl Peroxide Topical Gel also contains benzoyl peroxide for topical use. Benzoyl peroxide is an antibacterial and keratolytic agent.

Chemically benzoyl peroxide is C14H10O4. It has the following structural formula:

Erythromycin acts by inhibition of protein synthesis in susceptible organisms by reversibly binding to 50 S ribosomal subunits, thereby inhibiting translocation of aminoacyl transfer-RNA and inhibiting polypeptide synthesis. Antagonism has been demonstrated in vitro between erythromycin, lincomycin, chloramphenicol and clindamycin. Benzoyl peroxide is an antibacterial agent which has been shown to be effective against Propionibacterium acnes, an anaerobe found in sebaceous follicles and comedones. The antibacterial action of benzoyl peroxide is believed to be due to the release of active oxygen.

Erythromycin-Benzoyl Peroxide Topical Gel is indicated for the topical treatment of acne vulgaris.

Erythromycin-Benzoyl Peroxide Topical Gel is contraindicated in those individuals who have shown hypersensitivity to any of its components.

Treatment with antibacterial agents alters the normal flora of the colon and may permit overgrowth of clostridia. Studies indicate that a toxin produced by Clostridium difficile is one primary cause of “antibiotic-associated colitis.”

The use of antibiotic agents may be associated with the overgrowth of nonsusceptible organisms including fungi. If this occurs, discontinue use and take appropriate measures.

1.
This medication is to be used as directed by the physician. It is for external use only. Avoid contact with the eyes, nose, mouth, and all mucous membranes.
2.
This medication should not be used for any disorder other than that for which it was prescribed.
3.
Patients should not use any other topical acne preparation unless otherwise directed by their physician.
4.
Patients should report to their physician any signs of local adverse reactions.
5.
Erythromycin-Benzoyl Peroxide Topical Gel may bleach hair or colored fabric.
6.
Keep product refrigerated and discard after 3 months.

Data from a study using mice known to be highly susceptible to cancer suggests that benzoyl peroxide acts as a tumor promoter. The clinical significance of this is unknown.

No animal studies have been performed to evaluate the carcinogenic and mutagenic potential or effects on fertility of topical erythromycin. However, long-term (2-year) oral studies in rats with erythromycin ethylsuccinate and erythromycin base did not provide evidence of tumorigenicity. There was no apparent effect on male or female fertility in rats fed erythromycin (base) at levels up to 0.25% of diet.

Animal reproduction studies have not been conducted with Erythromycin-Benzoyl Peroxide Topical Gel or benzoyl peroxide.

Safety and effectiveness of this product in pediatric patients below the age of 12 have not been established.

In controlled clinical trials, the incidence of adverse reactions associated with the use of Erythromycin-Benzoyl Peroxide Topical Gel was approximately 3%. These were dryness and urticarial reaction.

Erythromycin-Benzoyl Peroxide Topical Gel should be applied twice daily, morning and evening, or as directed by a physician, to affected areas after the skin is thoroughly washed, rinsed with warm water and gently patted dry.

How Supplied and Compounding Directions:

Prior to dispensing, tap vial until all powder flows freely. Add indicated amount of room temperature 70% ethyl alcohol to vial (to the mark) and immediately shake to completely dissolve erythromycin. Add this solution to gel and stir until homogeneous in appearance (1 to 1½ minutes). Erythromycin-Benzoyl Peroxide Topical Gel should then be stored under refrigeration. Do not freeze. Place a 3-month expiration date on the label.

Do not freeze. Keep tightly closed. Keep out of reach of children. 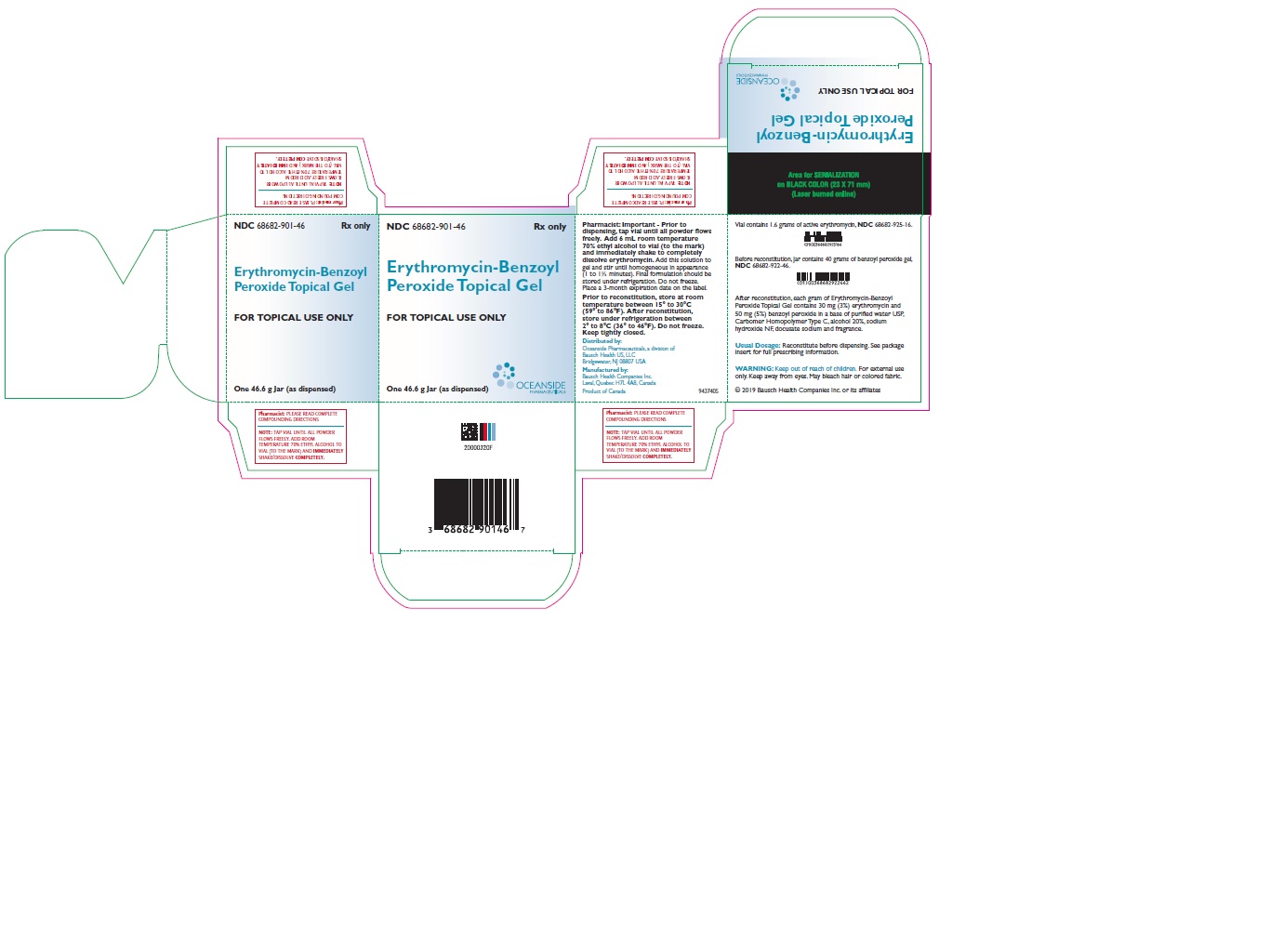 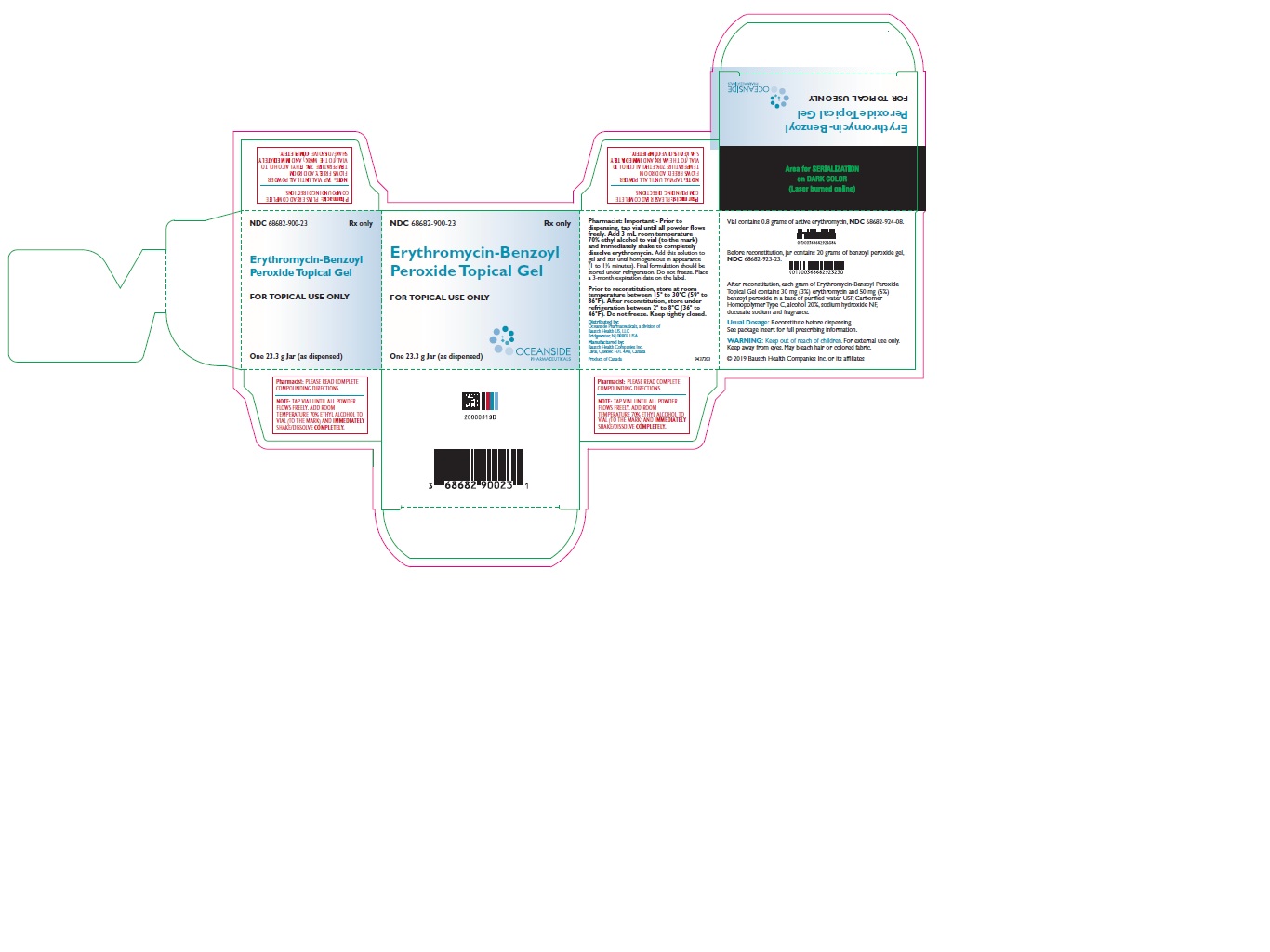 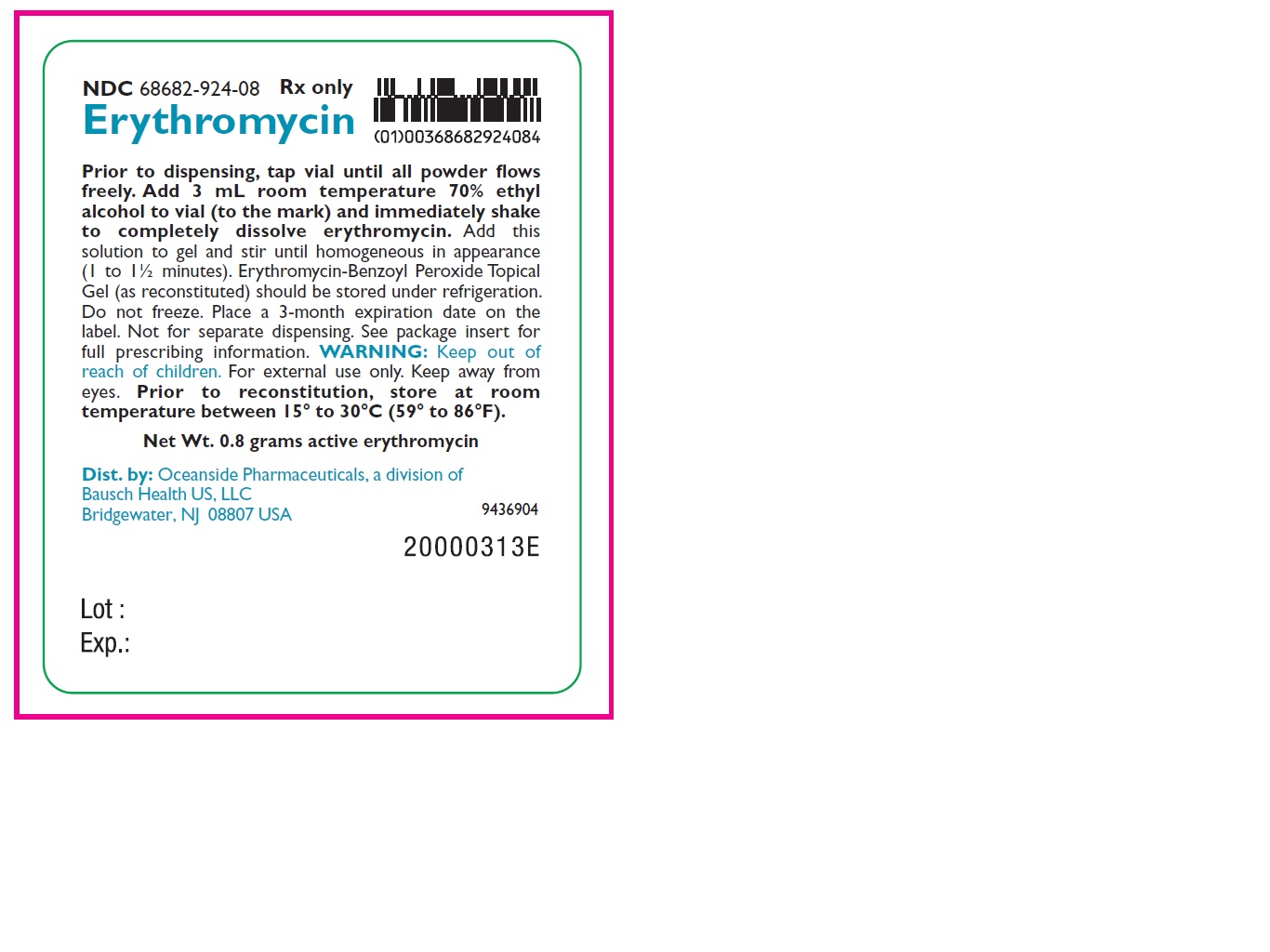 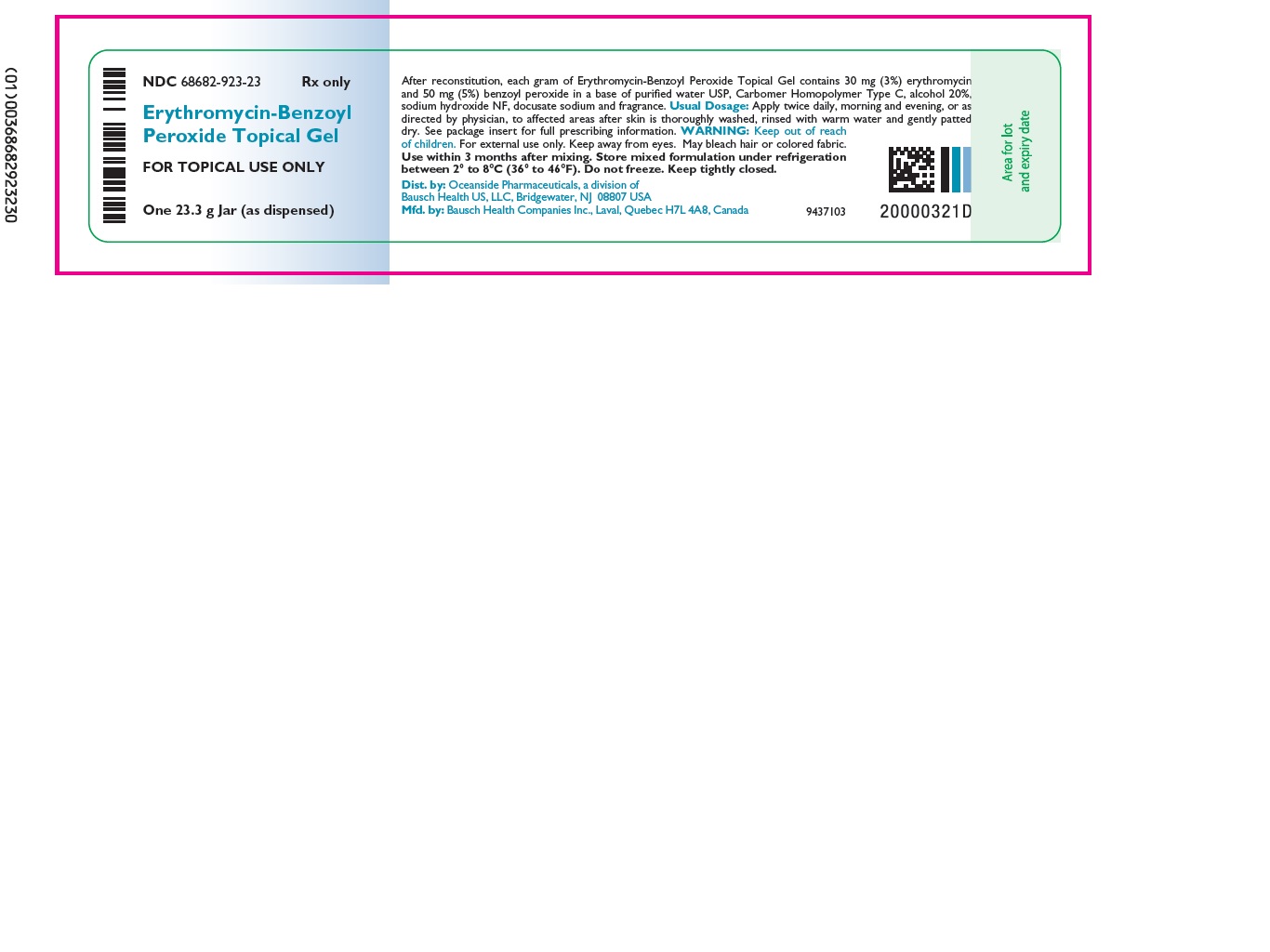 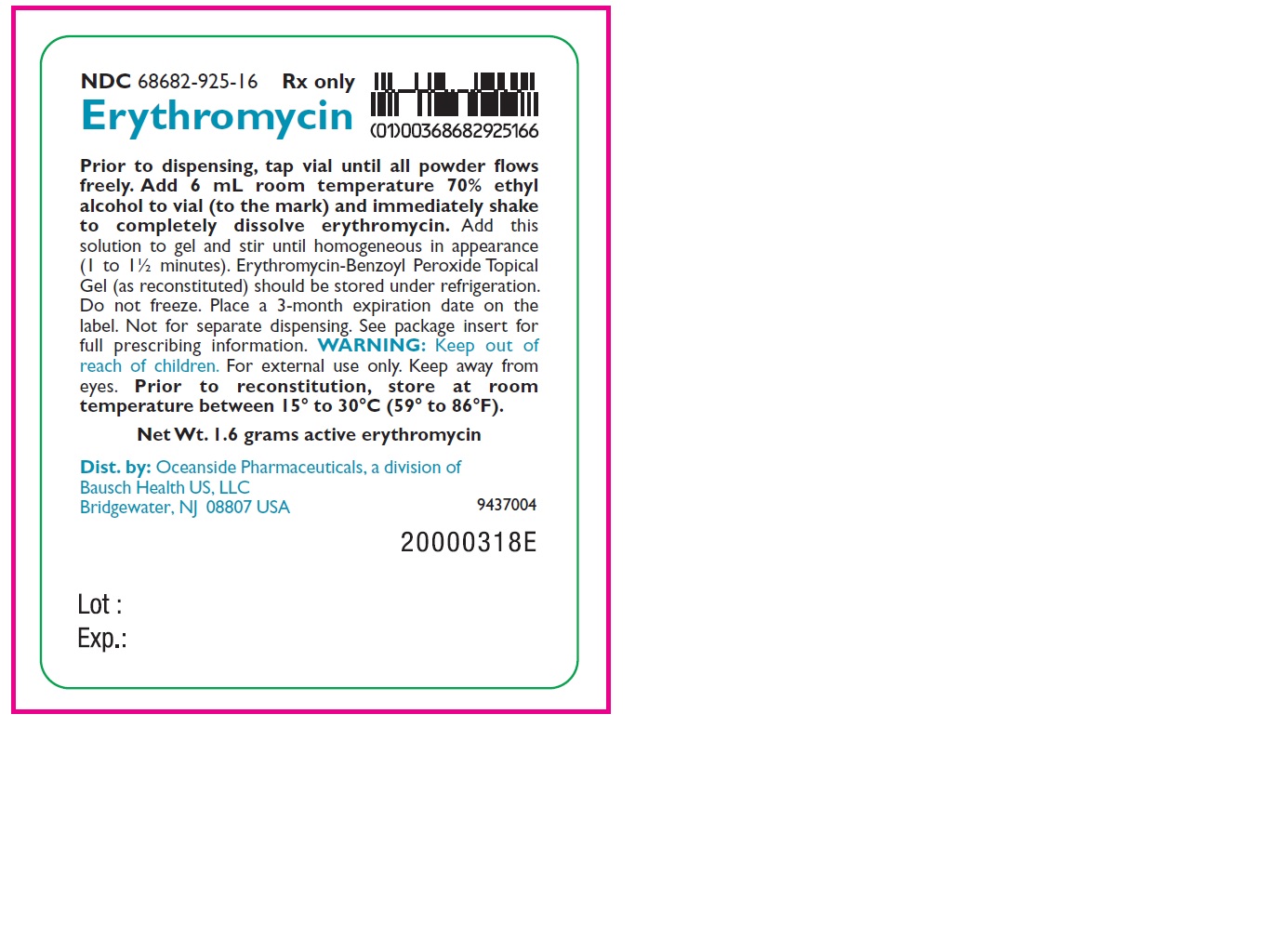 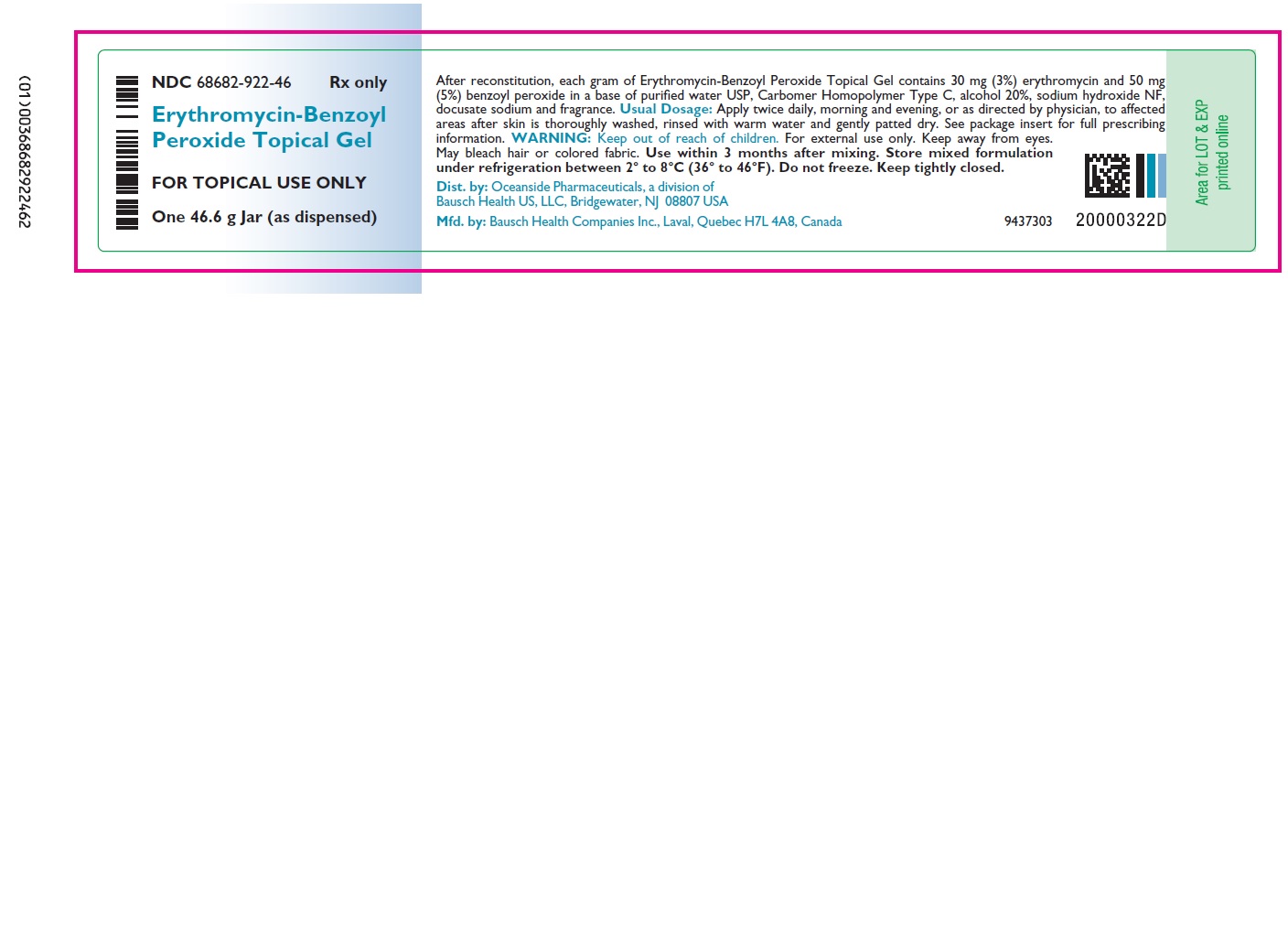