Phentermine hydrochloride tablets, USP are indicated as a short-term (a few weeks) adjunct in a regimen of weight reduction based on exercise, behavioral modification and caloric restriction in the management of exogenous obesity for patients with an initial body mass index ≥ 30 kg/m2, or ≥ 27 kg/m2 in the presence of other risk factors (e.g., controlled hypertension, diabetes, hyperlipidemia).

The usual adult dose is one tablet (37.5 mg) daily, as prescribed by the physician, administered before breakfast or 1 to 2 hours after breakfast. The dosage may be adjusted to the patient’s need. For some patients, half tablet (18.75 mg) daily may be adequate, while in some cases it may be desirable to give half tablets (18.75 mg) two times a day.

Phentermine hydrochloride is not recommended for use in pediatric patients ≤ 16 years of age.

Coadministration With Other Drug Products for Weight Loss

Phentermine hydrochloride is indicated only as short-term (a few weeks) monotherapy for the management of exogenous obesity. The safety and efficacy of combination therapy with phentermine and any other drug products for weight loss including prescribed drugs, over-the-counter preparations, and herbal products, or serotonergic agents such as selective serotonin reuptake inhibitors (e.g., fluoxetine, sertraline, fluvoxamine, paroxetine), have not been established. Therefore, coadministration of phentermine and these drug products is not recommended.

Effect on the Ability to Engage in Potentially Hazardous Tasks

Risk of Abuse and Dependence

Phentermine is related chemically and pharmacologically to amphetamine (d- and d/l-amphetamine) and other related stimulant drugs have been extensively abused. The possibility of abuse of phentermine should be kept in mind when evaluating the desirability of including a drug as part of a weight reduction program. See Drug Abuse and Dependence (9) and Overdosage (10).

Use in Patients With Hypertension

Requirements may be altered [see Warnings and Precautions (5.9)].

Teratogenic Effects
Pregnancy category X
Phentermine is contraindicated during pregnancy because weight loss offers no potential benefit to a pregnant woman and may result in fetal harm. A minimum weight gain, and no weight loss, is currently recommended for all pregnant women, including those who are already overweight or obese, due to obligatory weight gain that occurs in maternal tissues during pregnancy. Phentermine has pharmacologic activity similar to amphetamine (d- and dll-amphetamine) [see Clinical Pharmacology (12.1)]. Animal reproduction studies have not been conducted with phentermine. If this drug is used during pregnancy, or if the patient becomes pregnant while taking this drug, the patient should be apprised of the potential hazard to a fetus.

Keep out of reach of children.  Dosage: See package insert

Distributed by: Northwind Pharmaceuticals Indianapolis, IN 46256 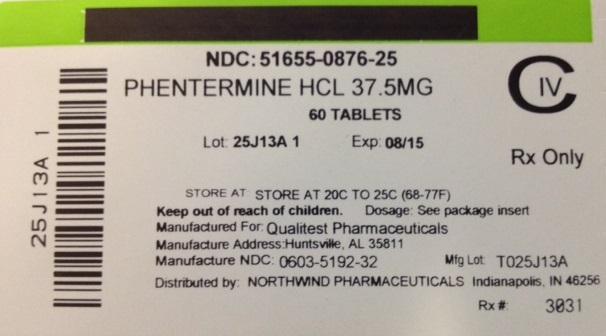