Radiogardase is indicated for treatment of patients with known or suspected internal contamination with radioactive cesium and/or radioactive or non-radioactive thallium, in order to increase their rates of elimination.

Prior to initiating treatment with Radiogardase, follow radioactive decontamination safety procedures including:

Radiogardase can cause constipation. Monitor and treat for signs and symptoms of constipation. Patients with disorders associated with decreased gastrointestinal motility are at higher risk.

Radiogardase may bind to electrolytes found in the gastrointestinal tract. Hypokalemia, with serum potassium values of 2.5 – 2.9 (normal 3.5 – 5.0), was reported in 3 (7%) of 42 patients during treatement with Radiogardase. Monitor serum electrolytes during Radiogardase treatment, particularly when treating patients with pre-existing cardiac arrhythmias or electrolyte imbalances.

Radiogardase is excreted primarily in feces and turns stools blue. When Radiogardase capsules are opened and the contents eaten with food, the oral mucosa and dentition may also be colored blue.

Constipation was reported in 10 (24%) of 42 patients treated with Radiogardase. Severity of constipation was mild in 7 patients and moderate in 3 patients [see Warnings and Precautions (5.2)].

Pregnancy Category C
It is not known whether Radiogardase can cause fetal harm when administered to a pregnant woman or if it can affect reproduction capacity. Animal reproduction studies have not been conducted with prussian blue insoluble. However, since Radiogardase is not absorbed from the gastrointestinal tract, effects on the fetus are not expected.

Radioactive cesium ( 137Cs) crosses the human placenta. One patient, contaminated with 0.005 mCi 137Cs during her 4 th month of pregnancy, was not treated with Radiogardase. At birth, the concentration of 137Cs was the same in the mother and the infant.

Thallium crosses the human placenta. Reported fetal effects include failure to thrive and death. The toxicity from untreated radioactive cesium or thallium exposure is greater than the potential reproductive toxicity of Radiogardase.

Studies to determine if Radiogardase is excreted in human milk have not been conducted. Since Radiogardase is not absorbed from the gastrointestinal tract, its excretion in milk is unlikely. However, cesium and thallium are transmitted from mother to infant in breast milk. Women internally contaminated with cesium or thallium should not breastfeed.

Overall, 27 pediatric patients received Radiogardase in the range of 3 to 10 grams per day in divided doses (the maximum recommended adolescent dosage is 9 grams per day). Radiogardase treatment reduced the whole body effective half-life of 137Cs by 46% in adolescents and by 43% in children aged 4 to 12 years of age. In 12 patients for whom the rate of radiation elimination data are available, the rate was similar to that in adults treated with 3 grams three times daily and in pediatric patients treated with 1 gram three times daily. By body weight, the dose ranged from

Pediatric patients aged 2 up to 4 years are expected to have biliary and gastrointestinal function that is comparable to that of a 4-year old.

The safety and efficacy of Radiogardase has not been established in the treatment of 137Cs contamination in pediatric patients 0 to 2 years old. There are differences in the developmental maturity of the biliary system and gastrointestinal tract of neonates and infants (0 – 2 years). The dosage-related adverse reactions of Radiogardase on an immature gastrointestinal tract are not known.

The safety and efficacy of Radiogardase in patients aged 65 and over have not been evaluated, to determine whether they respond differently from younger subjects.. In general, elderly patients should be monitored closely, reflecting the greater frequency of decreased cardiac function and of concomitant disease or other drug therapy.

Radiogardase is not systemically bioavailable and does not rely on hepatic metabolism for activation or inactivation. However, Radiogardase may be less effective in patients with hepatic impairment, due to decreased excretion of cesium and thallium in the bile.

Based on reported adverse reactions and mechanism of action, possible overdosage symptoms may include constipation, obstruction, or severe decrease in electrolytes. Gastric distress was reported in 3 patients treated with 20 gram/day of Radiogardase (approximately 2.2 times the maximum recommended dosage). In these patients, the dose was reduced to 10 gram/day for continued treatment.

Radiogardase (prussian blue insoluble) is a decorporation agent for oral use. Radiogardase capsules contain insoluble ferric hexacyanoferrate(II), with an empirical formula of Fe 4[Fe(CN) 6] 3 and a molecular weight of 859.3 Daltons. It is supplied as 0.5 gram of blue powder in gelatin capsules with 0 – 38 mg of microcrystalline cellulose. The dark blue capsule is imprinted with the light blue inscription:

PB. The powder may vary from uniformly fine, dark granules to coarse light and dark-colored granules. The structural formula for prussian blue insoluble is shown below.

The crystal structure of prussian blue insoluble is a cubic lattice with the Fe II and Fe III atoms occupying the corners of the cube and the cyanide groups positioned on the sides.

Prussian blue insoluble, ferric hexacyanoferrate(II), acts by ion-exchange, adsorption, and mechanical trapping within the crystal structure, and has a high affinity for radioactive and non-radioactive cesium and thallium.

Prussian blue insoluble binds cesium and thallium isotopes in the gastrointestinal tract after these isotopes are ingested or excreted in the bile by the liver, thereby reducing gastrointestinal reabsorption (enterohepatic circulation). The rate of cesium and thallium elimination is proportional to the duration and dose of prussian blue insoluble.

8 – 10 days.The physiologic transport of thallium follows the same route as potasium and is excreted by bile in enterohepatic circulation. Without Radiogardase treatment, the fecal to urine excretion ratio of thallium is approximately 2:1. 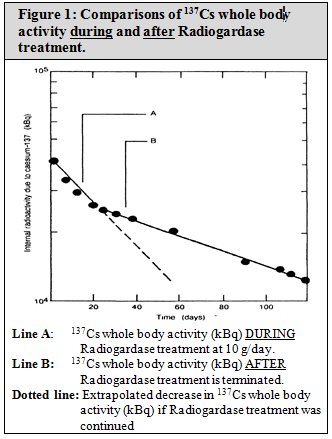 Animal studies have not been performed to evaluate the carcinogenic or mutagenic potential of prussian blue insoluble. No study on impairment of male or female fertility and reproductive performance has been conducted in animals.

Absorption/Elimination
In an animal study (pigs, n =38), after a single dose of 40 mg of labeled prussian blue insoluble, 99% of the administered prussian blue dose was excreted unchanged in feces. Absorption from multiple doses has not been studied.

In studies of rats, pigs, and dogs that were internally contaminated with cesium and thallium, the presence of the insoluble complexes in the gastrointestinal lumen changed the primary elimination route from the kidney to the feces and increased the rate of elimination of these two contaminants.

Data from additional literature articles including 19 patients contaminated with 137Cs in other incidents and a study of 7 human subjects who voluntarily ingested trace doses of 137Cs showed a similar reduction in whole body effective half-life with Radiogardase treatment.

Thirty-four patients treated with Radiogardase for non-radioactive thallium poisoning have been reported in the literature. Radiogardase treatment reduced the mean serum biologic half-life of thallium from 8 days to 3 days.

Radiogardase is supplied as gelatin capsules containing 0.5 grams of prussian blue insoluble for oral administration. The dark blue capsule is imprinted with the light blue inscription:

PB. It is packaged in white plastic containers with a child-resistant tamper-evident closure. Each container contains 36 capsules.

Inform patients of safety measures to be taken to minimize radiation exposure to others or re-exposure to self. This includes instruction on appropriate use of the toilet, hand washing, and handling of items such as clothing that might get contaminated with body fluids. 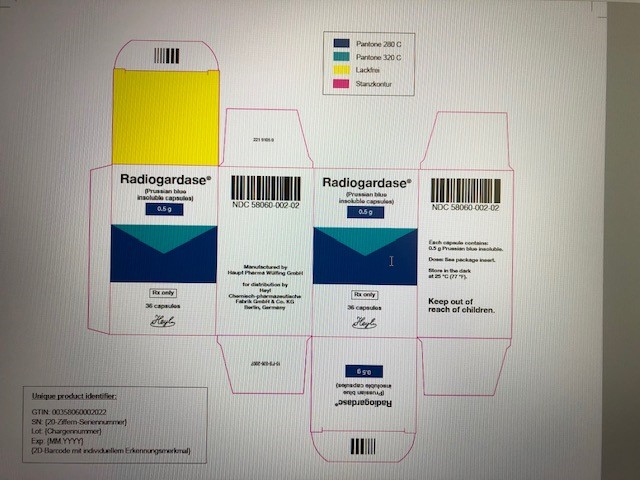 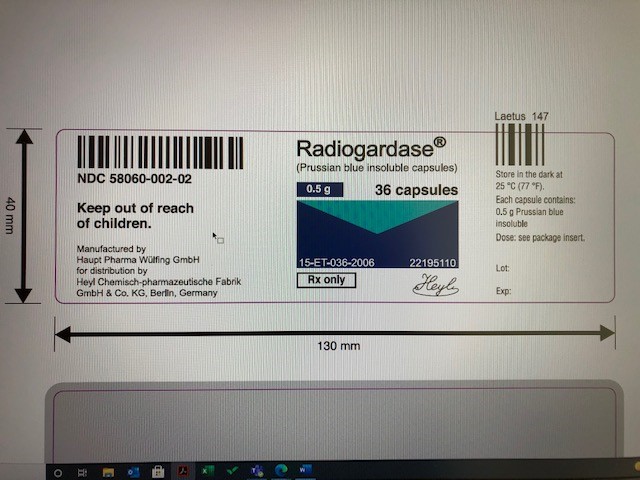