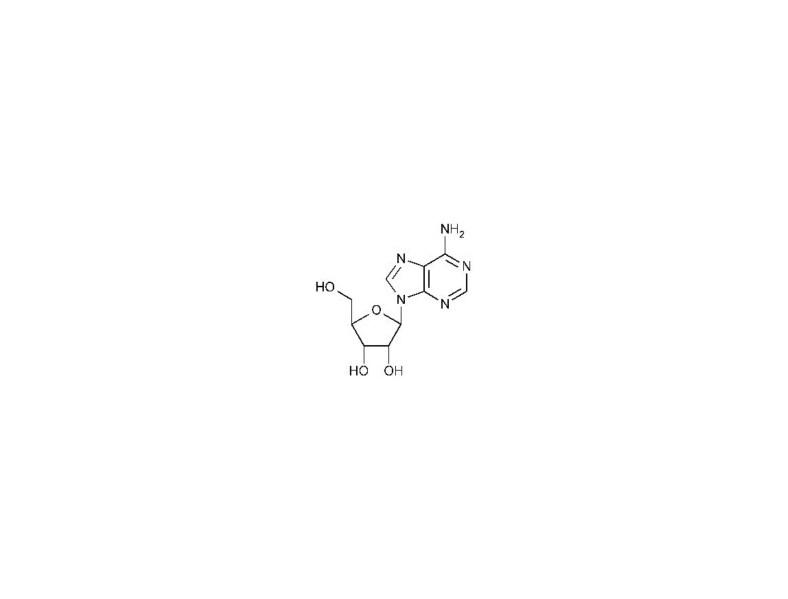 Adenosine is a white crystalline powder. It is soluble in water and practically insoluble in alcohol. Solubility increases by warming and lowering the pH. Adenosine is not chemically related to other antiarrhythmic drugs. Adenosine Injection, USP is a sterile solution for rapid bolus intravenous injection. Each mL contains 3 mg adenosine, USP and 9 mg sodium chloride, USP in water for injection, USP. The pH of the solution is between 4.5 and 7.5.

The intravenous bolus dose of 6 or 12 mg adenosine usually has no systemic hemodynamic effects. When larger doses are given by infusion, adenosine decreases blood pressure by decreasing peripheral resistance.

In controlled studies in the United States, bolus doses of 3, 6, 9, and 12 mg were studied. A cumulative 60% of patients with paroxysmal supraventricular tachycardia had converted to normal sinus rhythm within one minute after an intravenous bolus dose of 6 mg adenosine (some converted on 3 mg and failures were given 6 mg), and a cumulative 92% converted after a bolus dose of 12 mg. Seven to sixteen percent of patients converted after 1 to 4 placebo bolus injections. Similar responses were seen in a variety of patient subsets, including those using or not using digoxin, those with Wolff-Parkinson-White Syndrome, males, females, blacks, Caucasians, and Hispanics.

Adenosine Injection, USP is indicated for the following:

Adenosine exerts its effect by decreasing conduction through the A-V node and may produce a short lasting first-, second- or third-degree heart block. Appropriate therapy should be instituted as needed. Patients who develop high-level block on one dose of adenosine should not be given additional doses. Because of the very short half-life of adenosine, these effects are generally self-limiting. Appropriate resuscitative measures should be available.

Studies in animals have not been performed to evaluate the carcinogenic potential of adenosine. Adenosine was negative for genotoxic potential in the Salmonella (Ames Test) and Mammalian Microsome Assay.

No controlled studies have been conducted in pediatric patients to establish the safety and efficacy of adenosine for the conversion of paroxysmal supraventricular tachycardia (PSVT). However, intravenous adenosine has been used for the treatment of PSVT in neonates, infants, children and adolescents (see DOSAGE AND ADMINISTRATION).1

Clinical studies of adenosine did not include sufficient numbers of subjects aged 65 and over to determine whether they respond differently from younger subjects. Other reported clinical experience has not identified differences in responses between elderly and younger patients. In general, adenosine in geriatric patients should be used with caution since this population may have a diminished cardiac function, nodal dysfunction, concomitant diseases or drug therapy that may alter hemodynamic function and produce severe bradycardia or AV block.

he following reactions were reported with intravenous adenosine used in controlled U.S. clinical trials. The placebo group had a less than 1% rate of all of these reactions.

The following adverse events have been reported from marketing experience with adenosine injection. Because these events are reported voluntarily from a population of uncertain size, are associated with concomitant diseases and multiple drug therapies and surgical procedures, it is not always possible to reliably estimate their frequency or establish a causal relationship to drug exposure. Decisions to include these events in labeling are typically based on one or more of the following factors:

The half-life of adenosine is less than 10 seconds. Thus, adverse effects are generally rapidly self-limiting. Treatment of any prolonged adverse effects should be individualized and be directed toward the specific effect. Methylxanthines, such as caffeine and theophylline, are competitive antagonists of adenosine.

The dose recommendation is based on clinical studies with peripheral venous bolus dosing. Central venous (CVP or other) administration of adenosine has not been systematically studied.

Initial dose: Give 0.05 to 0.1 mg/kg as a rapid intravenous bolus given either centrally or peripherally. A saline flush should follow.

Repeat administration: If conversion of PSVT does not occur within 1 to 2 minutes, additional bolus injections of adenosine can be administered at incrementally higher doses, increasing the amount given by 0.05 to 0.1 mg/kg. Follow each bolus with a saline flush. This process should continue until sinus rhythm is established or a maximum single dose of 0.3 mg/kg is used.

Adenosine Injection, USP is supplied as a sterile solution in normal saline as follows: 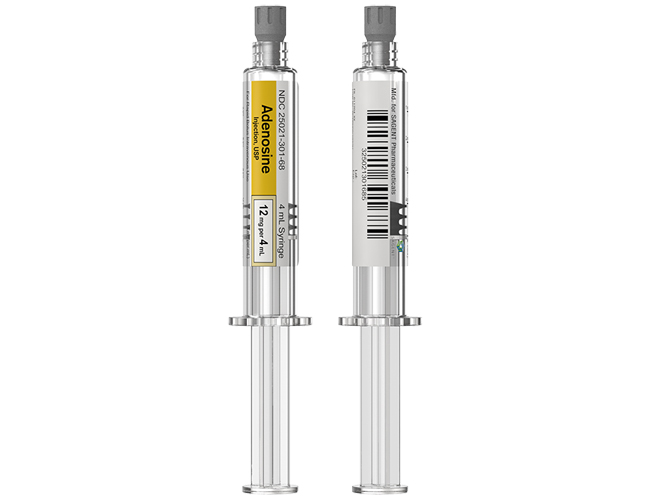 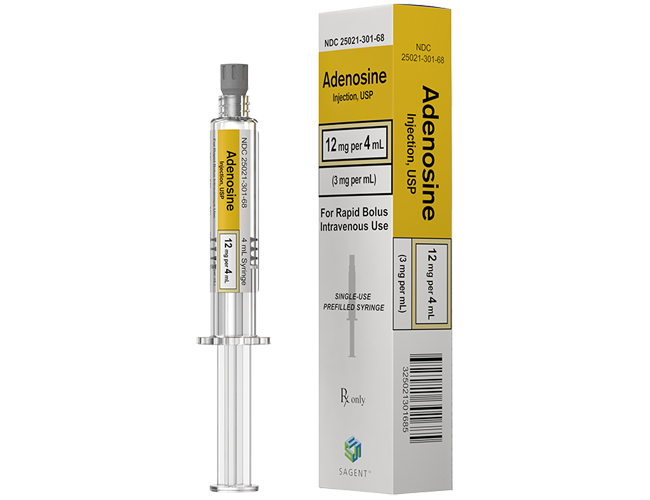