Trihexyphenidyl HCl is a synthetic antispasmodic drug. It is designated chemically as α-Cyclohexylα-phenyl-1-piperidinepropanol hydrochloride and its structural formula is as follows: 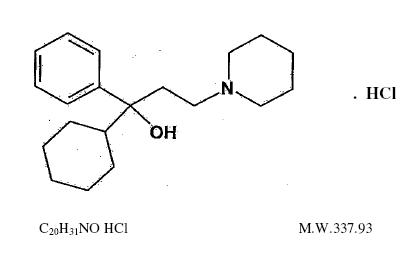 
Trihexyphenidyl HCl is indicated as an adjunct in the treatment of all forms of parkinsonism (postencephalitic, arteriosclerotic, and idiopathic). It is often useful as adjuvant therapy when treating these forms of parkinsonism with levodopa. Additionally, it is indicated for the control of extrapyramidal disorders caused by central nervous system drugs such as the dibenzoxazepines, phenothiazines, thioxanthenes, and butyrophenones.

Patients to be treated with trihexyphenidyl HCl should have a gonioscope evaluation prior to initiation of therapy and close monitoring of intraocular pressures. The use of anticholinergic drugs may precipitate angle closure with an increase in intraocular pressure. If blurring of vision occurs during therapy, the possibility of narrow angle glaucoma should be considered. Blindness has been reported due to aggravation of narrow angle glaucoma (see CONTRAINDICATIONS and ADVERSE REACTIONS).

Trihexyphenidyl HCl should be administered with caution in hot weather, especially when given concomitantly with other atropine-like drugs to the chronically ill, alcoholics, those who have central nervous system disease, or those who do manual labor in a hot environment. Anhidrosis may occur more readily when some disturbance of sweating already exists. If there is evidence of anhidrosis, the possibility of hyperthermia should be considered. Dosage should be decreased so that the ability to maintain body heat equilibrium via perspiration is not impaired. Severe anhidrosis and fatal hyperthermia have occurred with the use of anticholinergics under the conditions described above.

The diagnostic evaluation of patients with this syndrome is complicated. In arriving at a diagnosis, it is important to identify cases where the clinical presentation includes both serious medical illness (eg, pneumonia, systemic infection, etc.) and untreated or inadequately treated extrapyramidal signs and symptoms (EPS). Other important considerations in the differential diagnosis include central anticholinergic toxicity, heat stroke, drug fever, and primary central nervous system (CNS) pathology.


Patients with cardiac, liver, or kidney disorders, or with hypertension, should be closely monitored.

Since trihexyphenidyl HCl has atropine-like properties, patients on long-term treatment should be carefully monitored for untoward reactions.

Tardive dyskinesia may appear in some patients on long-term therapy with antipsychotic drugs or may occur after therapy with these drugs has been discontinued. Antiparkinsonism agents do not alleviate the symptoms of tardive dyskinesia, and in some instances may aggravate them.

Patients with arteriosclerosis or with a history of idiosyncrasy to other drugs may exhibit reactions of mental confusion, agitation, disturbed behavior, or nausea and vomiting. Such patients should be allowed to develop a tolerance through the initial administration of a small dose and gradual increase in dose until an effective level is reached. If a severe reaction should occur, administration of the drug should be discontinued for a few days and then resumed at a lower dosage. Psychiatric disturbances can result from indiscriminate use (leading to overdosage) to sustain continued euphoria. (See DRUG ABUSE AND DEPENDENCE.)


Trihexyphenidyl HCl may impair mental and/or physical abilities required for performance of hazardous tasks, such as operating machinery or driving a motor vehicle. Patients should be cautioned about operating machinery, including automobiles, until they are reasonably certain that trihexyphenidyl HCl therapy does not adversely affect their ability to engage in such activities.

Because of increased sedative effects, patients should be cautioned to avoid the use of alcohol or other CNS depressants while taking trihexyphenidyl HCl.

Since this medication may increase the susceptibility to heat stroke (gastrointestinal (GI) problems, fever, heat intolerance), use with caution during hot weather. (See WARNINGS.)

Patients should be advised to report the occurrence of Gl problems, fever, or heat intolerance promptly since paralytic ileus, hyperthermia, or heat stroke may occur.

If GI upset occurs, trihexyphenidyl HCl may be taken with food.

Patients should have close monitoring of intraocular pressure. (See WARNINGS.)


Cannabinoids, barbiturates, opiates, and alcohol may have additive effects with trihexyphenidyl HCl, and thus, an abuse potential exists.

Concurrent use of alcohol or other CNS depressants with trihexyphenidyl HCl may cause increased sedative effects.

The usual dose of either trihexyphenidyl or levodopa may need to be reduced during concomitant therapy, since concomitant administration may increase drug-induced involuntary movements (see DOSAGE AND ADMINISTRATION).


No carcinogenicity studies or adequate genotoxicity or fertility studies have been conducted for trihexyphenidyl HCl.

As with other anticholinergics, trihexyphenidyl may cause suppression of lactation. Therefore, trihexyphenidyl should only be used if the expected benefit to the mother outweighs the potential risk to the infant.


Safety and effectiveness in pediatric patients have not been established. (See also ADVERSE REACTIONS.)


Sensitivity to the actions of parasympatholytic drugs may increase with age, particularly over the age of 60; therefore, elderly patients generally should be started on low doses of trihexyphenidyl HCl and observed closely. Trihexyphenidyl HCl has been shown to cause some cognitive dysfunctions in the elderly, including confusion and memory impairment. (See ADVERSE REACTIONS and DOSAGE AND ADMINISTRATION.)


Minor side effects, such as dryness of the mouth, blurred vision, dizziness, mild nausea or nervousness, will be experienced by 30 to 50 percent of all patients. These sensations, however, are much less troublesome with trihexyphenidyl HCl than with belladonna alkaloids and are usually less disturbing than unalleviated parkinsonism. Such reactions tend to become less pronounced, and even to disappear, as treatment continues. Even before these reactions have remitted spontaneously, they may often be controlled by careful adjustment of dosage form, amount of drug, or interval between doses.

Isolated instances of suppurative parotitis secondary to excessive dryness of the mouth, skin  rashes, dilatation of the colon, paralytic ileus, and certain psychiatric manifestations such as delusions, hallucinations, and paranoia, all of which may occur with any of the atropine-like drugs, have been reported rarely with trihexyphenidyl HCl.

Potential side effects associated with the use of any atropine-like drugs, including trihexyphenidyl HCl, include cognitive dysfunctions, including confusion and memory impairment; constipation, drowsiness, urinary hesitancy or retention, tachycardia, dilation of the pupil, increased intraocular pressure, choreiform movements, weakness, vomiting, and headache. Exacerbation of parkinsonism with abrupt treatment withdrawal has been reported. Neuroleptic malignant syndrome with abrupt treatment withdrawal has been reported (see WARNINGS, Neuroleptic Malignant Syndrome).

In addition to adverse events seen in adults, the following adverse events have been reported in the literature in pediatric patients: hyperkinesia, psychosis, forgetfulness, weight loss, restlessness, chorea, and sleep alterations.

Although trihexyphenidyl HCl is not classified as a controlled substance, the possibility of abuse should be borne in mind due to its stimulant and euphoriant properties.

In humans, doses up to 300 mg (5 mg/kg) have been ingested without fatalities or sequelae. However, rare cases of death associated with trihexyphenidyl overdosages taken in conjunction with other CNS-depressant agents have been reported or in patients with a compromised respiratory condition. Trihexyphenidyl blood concentrations associated with the fatalities ranged from 0.03 to 0.80 mg/l.

Treatment of acute overdose involves symptomatic and supportive therapy. Gastric lavage or other methods to limit absorption should be instituted. A small dose of diazepam or a short- acting barbiturate may be administered if CNS excitation is observed. Phenothiazines are contraindicated because the toxicity may be intensified due to their antimuscarinic action, causing coma. Respiratory support, artificial respiration or vasopressor agents may be necessary. Hyperpyrexia must be reversed, fluid volume replaced and acid-balance maintained. Urinary catheterization may be necessary. It is not known if trihexyphenidyl HCl is dialyzable.


Dosage should be individualized. The initial dose should be low and then increased gradually, especially in patients over 60 years of age. Whether trihexyphenidyl HCl may best be given before or after meals should be determined by the way the patient reacts. Postencephalitic patients, who are usually more prone to excessive salivation, may prefer to take it after meals and may, in addition, require small amounts of atropine which, under such circumstances, is sometimes an effective adjuvant. If trihexyphenidyl HCl tends to dry the mouth excessively, it may be .better to take it before meals, unless it causes nausea. If taken after meals, the thirst sometimes induced can be allayed by mint candies, chewing gum or water.


As initial therapy for parkinsonism, 1 mg of trihexyphenidyl HCl in tablet form may be administered the first day. The dose may then be increased by 2 mg increments at intervals of three to five days, until a total of 6 to 10 mg is given daily. The total daily dose will depend upon what is found to be the optimal level. Many patients derive maximum benefit from this daily total of 6 to 10 mg, but some patients, chiefly those in the postencephalitic group, may require a total daily dose of 12 to 15 mg.


The size and frequency of the trihexyphenidyl HCl dose needed to control extrapyramidal reactions to commonly employed tranquilizers, notably the phenothiazines, thioxanthenes, and butyrophenones, must be determined empirically. The total daily dosage usually ranges between 5 and 15 mg although, in some cases, these reactions have been satisfactorily controlled with as little as 1 mg daily. It may be advisable to commence therapy with a single 1 mg dose. If the extrapyramidal manifestations are not controlled in a few hours, the subsequent doses may be progressively increased until satisfactory control is achieved. Satisfactory control may sometimes be more rapidly achieved by temporarily reducing the dosage of the tranquilizer when instituting trihexyphenidyl HCl therapy and then adjusting the dosage of both drugs until the desired ataractic effect is retained without onset of extrapyramidal reactions.

Concomitant Use with Levodopa


When trihexyphenidyl HCl is used concomitantly with levodopa, the usual dose of each may need to be reduced. Careful adjustment is necessary, depending on side effects and degree of symptom control. An trihexyphenidyl HCl  dosage of  3  to 6 mg daily, in divided doses, is usually adequate.

Concomitant Use with Other Parasympathetic Inhibitors


Trihexyphenidyl HCl may be substituted, in whole or in part, for other parasympathetic inhibitors. The usual technique is partial substitution initially, with progressive reduction in the other medication as the dose of trihexyphenidyl HCl is increased.

Trihexyphenidyl Hydrochloride Tablets, USP 2 mg are white colored, round debossed with N, T on either side of the score line and '2' on the other side.

Trihexyphenidyl Hydrochloride Tablets, USP 5 mg are white colored, round debossed with N, T on either side of the score line and '5' on other side. 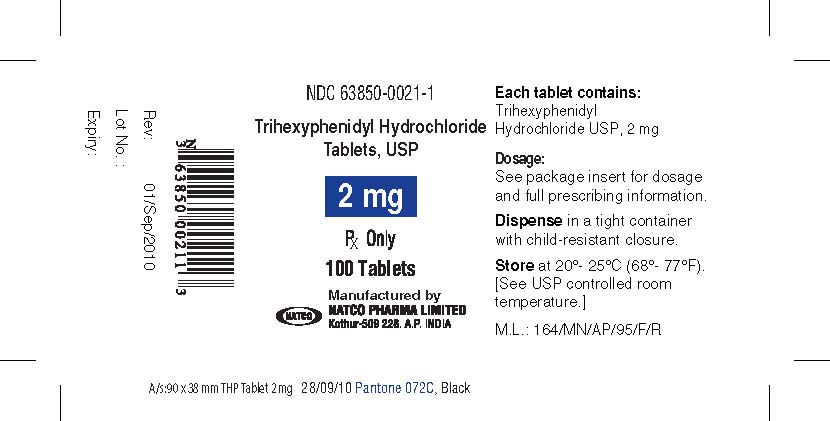 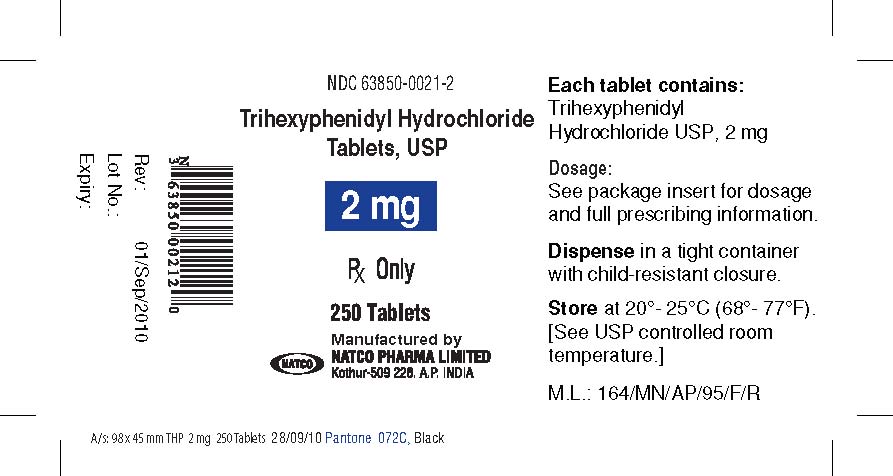 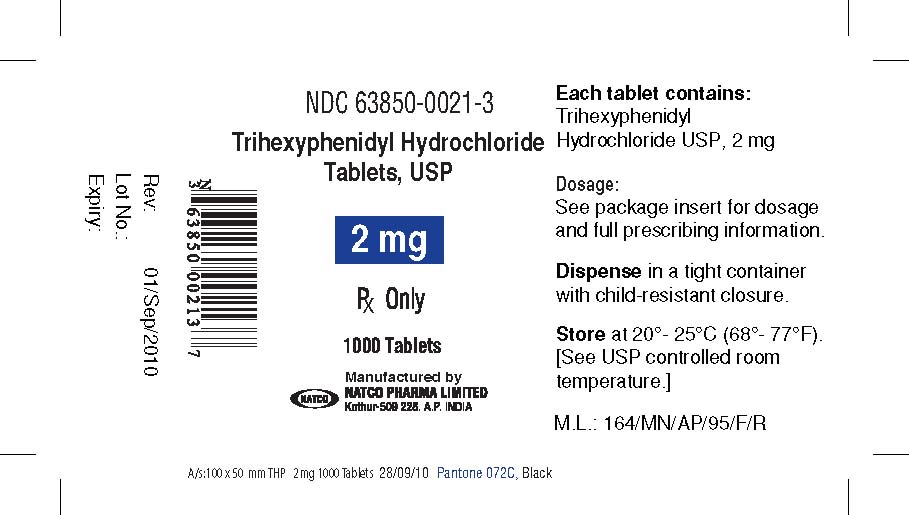 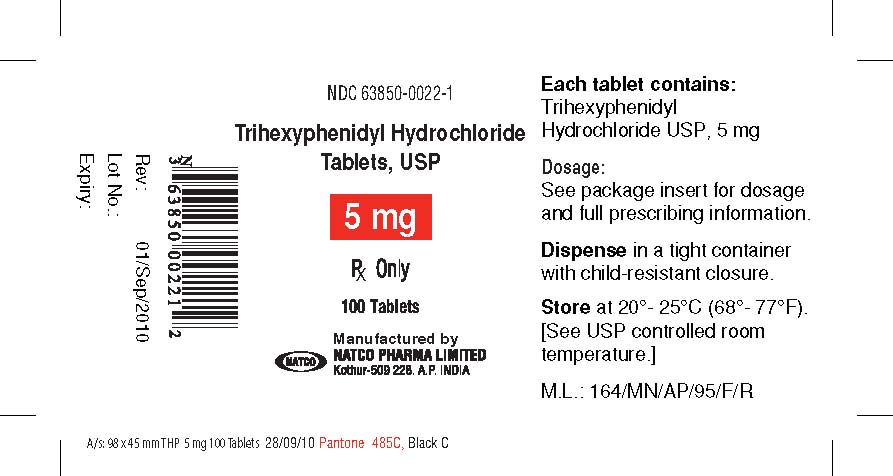 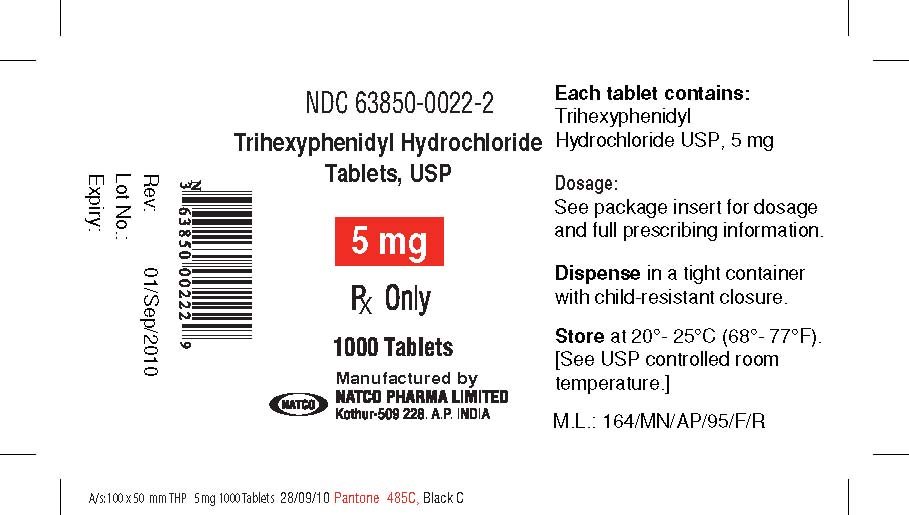