COGENTIN (benztropine mesylate) is supplied as a sterile injection for intravenous and intramuscular use.

Each milliliter of the injection contains:

COGENTIN possesses both anticholinergic and antihistaminic effects, although only the former have been established as therapeutically significant in the management of parkinsonism.

For use as an adjunct in the therapy of all forms of parkinsonism (see DOSAGE AND ADMINISTRATION).

Hypersensitivity to any component of COGENTIN injection.

COGENTIN may impair mental and/or physical abilities required for performance of hazardous tasks, such as operating machinery or driving a motor vehicle.

When COGENTIN is given concomitantly with phenothiazines, haloperidol, or other drugs with anticholinergic or antidopaminergic activity, patients should be advised to report gastrointestinal complaints, fever or heat intolerance promptly. Paralytic ileus, hyperthermia and heat stroke, all of which have sometimes been fatal, have occurred in patients taking anticholinergic-type antiparkinsonism drugs, including COGENTIN, in combination with phenothiazines and/or tricyclic antidepressants.

Since COGENTIN contains structural features of atropine, it may produce anhidrosis. For this reason, it should be administered with caution during hot weather, especially when given concomitantly with other atropine-like drugs to the chronically ill, the alcoholic, those who have central nervous system disease, and those who do manual labor in a hot environment. Anhidrosis may occur more readily when some disturbance of sweating already exists. If there is evidence of anhidrosis, the possibility of hyperthermia should be considered. Dosage should be decreased at the discretion of the physician so that the ability to maintain body heat equilibrium by perspiration is not impaired. Severe anhidrosis and fatal hyperthermia have occurred.

General: Since COGENTIN has cumulative action, continued supervision is advisable. Patients with a tendency to tachycardia and patients with prostatic hypertrophy should be observed closely during treatment.

Dysuria may occur, but rarely becomes a problem. Urinary retention has been reported with COGENTIN.

Tardive dyskinesia may appear in some patients on long-term therapy with phenothiazines and related agents, or may occur after therapy when these drugs have been discontinued. Antiparkinsonism agents do not alleviate the symptoms of tardive dyskinesia, and in some instances may aggravate them. COGENTIN is not recommended for use in patients with tardive dyskinesia.

Pediatric use: Because of the atropine-like side effects, COGENTIN should be used with caution in pediatric patients over three years of age (see CONTRAINDICATIONS).

Geriatric Use: Clinical studies of COGENTIN did not include sufficient numbers of subjects aged 65 and over to determine whether they respond differently from younger subjects. Other reported clinical experience has not identified differences in responses between the elderly and younger patients. In general, dose selection for an elderly patient should start at the low end of the dosing range (see DOSAGE AND ADMINISTRATION) and the dose should be increased only as needed with monitoring for the emergence of adverse events (see PRECAUTIONS and ADVERSE REACTIONS).

Metabolic/Immune or Skin: Occasionally, an allergic reaction, e.g., skin rash, develops. If this cannot be controlled by dosage reduction, the medication should be discontinued.

Since there is no significant difference in onset of effect after intravenous or intramuscular injection, usually there is no need to use the intravenous route. The drug is quickly effective after either route, with improvement sometimes noticeable a few minutes after injection. In emergency situations, when the condition of the patient is alarming, 1 to 2 mL of the injection normally will provide quick relief. If the parkinsonian effect begins to return, the dose can be repeated.

Some patients experience greatest relief when given the entire dose at bedtime; others react more favorably to divided doses, two to four times a day. Frequently, one dose a day is sufficient, and divided doses may be unnecessary or undesirable.

When COGENTIN is started, do not terminate therapy with other antiparkinsonian agents abruptly. If the other agents are to be reduced or discontinued, it must be done gradually. Many patients obtain greatest relief with combination therapy.

COGENTIN may be used concomitantly with SINEMET (Carbidopa-Levodopalevodopa), or with levodopa, in which case dosage adjustment may be required in order to maintain optimum response.

Drug-Induced Extrapyramidal Disorders: In treating extrapyramidal disorders due to neuroleptic drugs (e.g., phenothiazines), the recommended dosage is 1 to 4 mg once or twice a day parenterally. Dosage must be individualized according to the need of the patient. Some patients require more than recommended; others do not need as much.

In acute dystonic reactions, 1 to 2 mL of the injection usually relieves the condition quickly.

Treatment: Physostigmine salicylate, 1 to 2 mg, SC or IV, reportedly will reverse symptoms of anticholinergic intoxication. ** A second injection may be given after 2 hours if required. Otherwise treatment is symptomatic and supportive. Maintain respiration. A short-acting barbiturate may be used for CNS excitement, but with caution to avoid subsequent depression; supportive care for depression (avoid convulsant stimulants such as picrotoxin, pentylenetetrazol, or bemegride); artificial respiration for severe respiratory depression; a local miotic for mydriasis and cycloplegia; ice bags or other cold applications and alcohol sponges for hyperpyrexia, a vasopressor and fluids for circulatory collapse. Darken room for photophobia.

Injection COGENTIN, 1 mg per mL, is a clear, colorless solution and is supplied as follows: 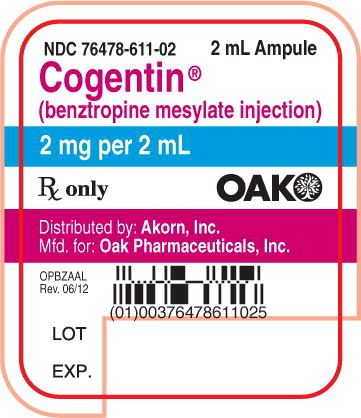 For Intravenous or Intramuscular Use 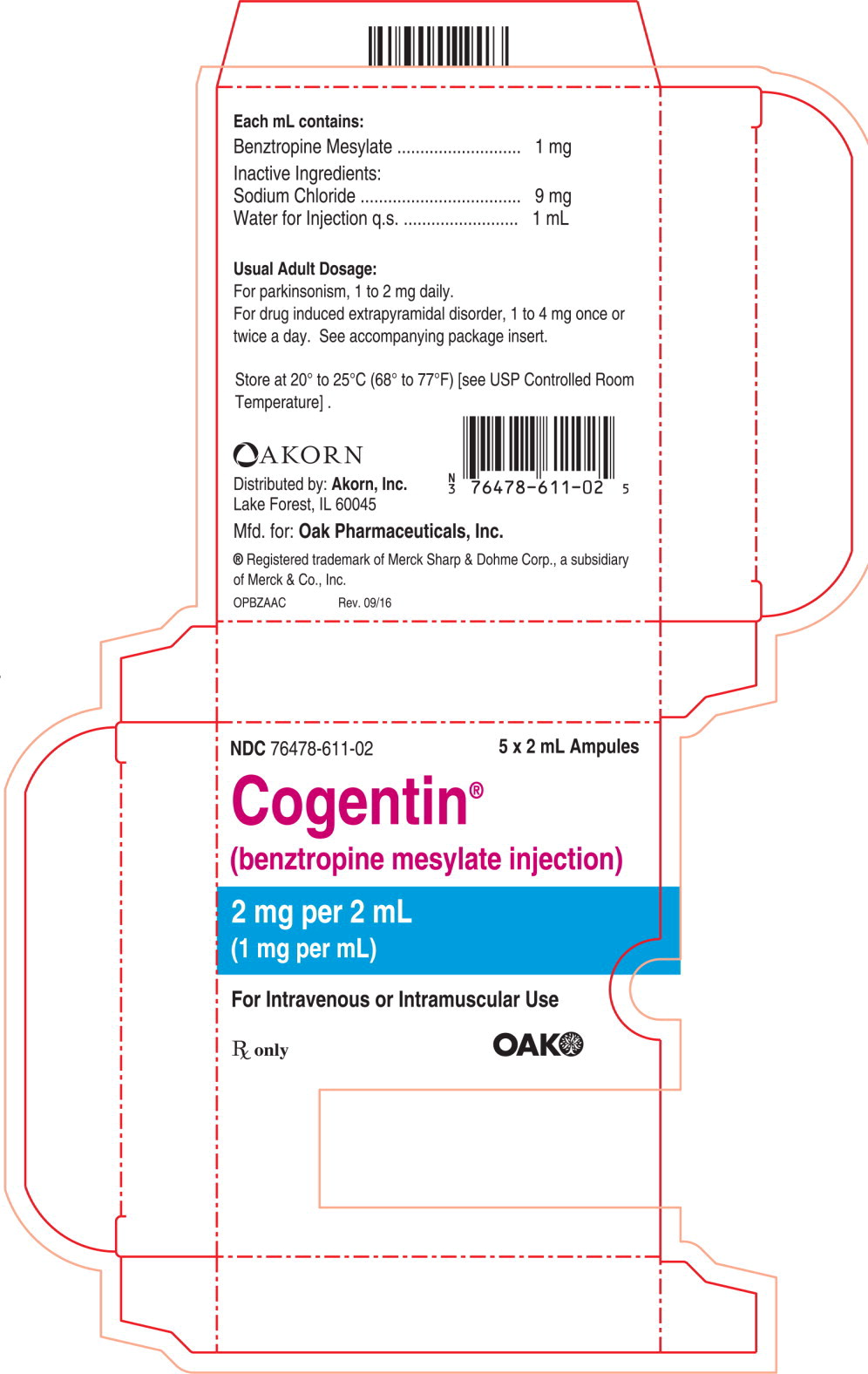