The chemical name for norethindrone is 17-Hydroxy-19-Nor-17α-pregn-4-en-20-yn-3-one. The structural formula follows:

Progestin-only oral contraceptives prevent conception by suppressing ovulation in approximately half of users, thickening the cervical mucus to inhibit sperm penetration, lowering the midcycle LH and FSH peaks, slowing the movement of the ovum through the fallopian tubes, and altering the endometrium.

If used perfectly, the first-year failure rate for progestin-only oral contraceptives is 0.5%. However, the typical failure rate is estimated to be closer to 5%, due to late or omitted pills. The following table lists the pregnancy rates for users of all major methods of contraception.

Progestin-only oral contraceptives should not be used by women who currently have the following conditions:

Norethindrone Tablets do not contain estrogen and, therefore, this insert does not discuss the serious health risks that have been associated with the estrogen component of combined oral contraceptives. The healthcare provider is referred to the prescribing information of combined oral contraceptives for a discussion of those risks, including, but not limited to, an increased risk of serious cardiovascular disease in women who smoke, carcinoma of the breast and reproductive organs, hepatic neoplasia, and changes in carbohydrate and lipid metabolism. The relationship between progestin-only oral contraceptives and these risks have not been established and there are no studies definitely linking progestin-only pill (POP) use to an increased risk of heart attack or stroke.

The physician should remain alert to the earliest manifestation of symptoms of any serious disease and discontinue oral contraceptive therapy when appropriate.

If follicular development occurs, atresia of the follicle is sometimes delayed, and the follicle may continue to grow beyond the size it would attain in a normal cycle. Generally these enlarged follicles disappear spontaneously. Often they are asymptomatic; in some cases they are associated with mild abdominal pain. Rarely they may twist or rupture, requiring surgical intervention.

4. Carcinoma of the Breast and Reproductive Organs:

Benign hepatic adenomas are associated with combined oral contraceptive use, although the incidence of benign tumors is rare in the United States. Rupture of benign, hepatic adenomas may cause death through intraabdominal hemorrhage

Lipid metabolism is occasionally affected in that HDL, HDL2, and apolipoprotein A-I and A-II may be decreased; hepatic lipase may be increased. There is no effect on total cholesterol, HDL3, LDL, or VLDL.

The effectiveness of progestin-only pills is reduced by hepatic enzyme-inducing drugs such as the anticonvulsants phenytoin, carbamazepine, and barbiturates, and the anti-tuberculosis drug rifampin. No significant interaction has been found with broad-spectrum antibiotics.

No adverse effects have been found on breastfeeding performance or on the health, growth or development of the infant. Small amounts of progestin pass into the breast milk, resulting in steroid levels in infant plasma of 1-6% of the levels of maternal plasma.

The onset or exacerbation of migraine or the development of severe headache with focal neurological symptoms which is recurrent or persistent requires discontinuation of progestin-only contraceptives and evaluation of the cause.

Safety and efficacy of norethindrone have been established in women of reproductive age. Safety and efficacy are expected to be the same for postpubertal adolescents under the age of 16 and for users 16 years and older. Use of this product before menarche is not indicated.

To achieve maximum contraceptive effectiveness, Norethindrone Tablets must be taken exactly as directed. One tablet is taken every day, at the same time. Administration is continuous, with no interruption between pill packs. See PATIENT LABELING for detailed instructions.

Camila™(norethindrone tablets, USP 0.35 mg) are packaged in cartons of six blister cards each containing 28 tablets. Each light pink, round, flat-faced, unscored tablet is debossed with stylizedb on one side and 715 on the other side. (NDC 54868-4814-0)

DETAILED INFORMATION FOR THE PATIENT

This product (like all oral contraceptives) is used to prevent pregnancy. It does not protect against HIV infection (AIDS) and other sexually transmitted diseases.

This leaflet is about birth control pills that contain one hormone, a progestin. Please read this leaflet before you begin to take your pills. It is meant to be used along with talking with your doctor or clinic.

HOW EFFECTIVE ARE POPS?


HOW DO POPS WORK?

YOU SHOULD NOT TAKE POPS

WARNING: If you have sudden or severe pain in your lower abdomen or stomach area, you may have an ectopic pregnancy or an ovarian cyst. If this happens, you should contact your doctor or clinic immediately.

If you are concerned about any of these side effects, check with your doctor or clinic.

USING POPS WITH OTHER MEDICINES

Before taking a POP, inform your healthcare provider of any other medication, including over-the-counter medicine, that you may be taking.

If you are taking medicines for seizures (epilepsy) or tuberculosis (TB), tell your doctor or clinic. These medicines can make POPs less effective:

Before you begin taking any new medicines be sure your doctor or clinic knows you are taking birth control pills that contain a progestin.

HOW TO TAKE POPS

IF YOU ARE LATE OR MISS TAKING YOUR POPS

If you become pregnant, or think you might be, stop taking POPs and contact your physician. Even though research has shown that POPs do not cause harm to the unborn baby, it is always best not to take any drugs or medicines that you don't need when you are pregnant.

WILL POPS AFFECT YOUR ABILITY TO GET PREGNANT LATER?

If you are breastfeeding, POPs will not affect the quality or amount of your breastmilk or the health of your nursing baby.

Diabetic women taking POPs do not generally require changes in the amount of insulin they are taking. However, your physician may monitor you more closely under these conditions.

If you have any questions or concerns, check with your doctor or clinic. You can also ask for the more detailed "professional package labeling" written for doctors and other healthcare providers.

How to Use the Camila™ Tablets Blister Card: 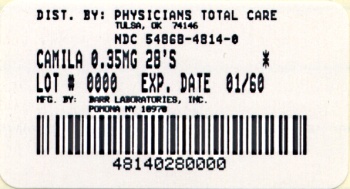