INFORMATION FOR THE PHYSICIAN GLUCAGON FOR INJECTION (rDNA ORIGIN)

Glucagon for Injection (rDNA origin) is a polypeptide hormone identical to human glucagon that increases blood glucose and relaxes smooth muscle of the gastrointestinal tract. Glucagon is synthesized in a special non-pathogenic laboratory strain of bacteria that has been genetically altered by the addition of the gene for glucagon. Escherichia coli

Glucagon is a single-chain polypeptide that contains 29 amino acid residues and has a molecular weight of 3483.

Crystalline glucagon is a white to off-white powder. It is relatively insoluble in water but is soluble at a pH of less than 3 or more than 9.5.

Glucagon is available for use intravenously, intramuscularly, or subcutaneously in a kit that contains a vial of sterile glucagon and a syringe of sterile diluent. The vial contains 1 mg (1 unit) of glucagon and 49 mg of lactose. Hydrochloric acid may have been added during manufacture to adjust the pH of the glucagon. One International Unit of glucagon is equivalent to 1 mg of glucagon. The diluent syringe contains 12 mg/mL of glycerin, Water For Injection, and hydrochloric acid. 1

Glucagon increases blood glucose concentration and is used in the treatment of hypoglycemia. Glucagon acts only on liver glycogen, converting it to glucose.

Glucagon has been studied following intramuscular, subcutaneous, and intravenous administration in adult volunteers. Administration of the intravenous glucagon showed dose proportionality of the pharmacokinetics between 0.25 and 2.0 mg. Calculations from a 1 mg dose showed a small volume of distribution (mean, 0.25 L/kg) and a moderate clearance (mean, 13.5 mL/min/kg). The half-life was short, ranging from 8 to 18 minutes.

Glucagon is extensively degraded in liver, kidney, and plasma. Urinary excretion of intact glucagon has not been measured.

In a study of 25 volunteers, a subcutaneous dose of 1 mg glucagon resulted in a mean peak glucose concentration of 136 mg/dL 30 minutes after injection ( ). Similarly, following intramuscular injection, the mean peak glucose level was 138 mg/dL, which occurred at 26 minutes after injection. No difference in maximum blood glucose concentration between animal-sourced and rDNA glucagon was observed after subcutaneous and intramuscular injection. seeFigure 1B 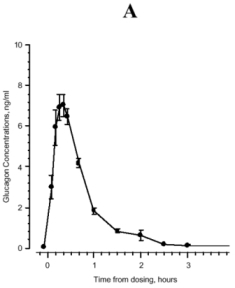 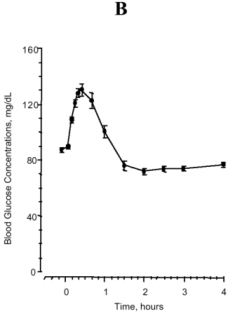 For the treatment of hypoglycemia:

Glucagon is indicated as a treatment for severe hypoglycemia.

Because patients with type 1 diabetes may have less of an increase in blood glucose levels compared with a stable type 2 patient, supplementary carbohydrate should be given as soon as possible, especially to a pediatric patient.

For use as a diagnostic aid:

Glucagon is indicated as a diagnostic aid in the radiologic examination of the stomach, duodenum, small bowel, and colon when diminished intestinal motility would be advantageous.

Glucagon should be administered cautiously to patients with a history suggestive of insulinoma, pheochromocytoma, or both. In patients with insulinoma, intravenous administration of glucagon may produce an initial increase in blood glucose; however, because of glucagon's hyperglycemic effect the insulinoma may release insulin and cause subsequent hypoglycemia. A patient developing symptoms of hypoglycemia after a dose of glucagon should be given glucose orally, intravenously, or by gavage, whichever is most appropriate.

Generalized allergic reactions, including urticaria, respiratory distress, and hypotension, have been reported in patients who received glucagon by injection.

Glucagon is effective in treating hypoglycemia only if sufficient liver glycogen is present. Because glucagon is of little or no help in states of starvation, adrenal insufficiency, or chronic hypoglycemia, hypoglycemia in these conditions should be treated with glucose.

Refer patients and family members to the attached Information for the User for instructions describing the method of preparing and injecting glucagon. Advise the patient and family members to become familiar with the technique of preparing glucagon before an emergency arises. Instruct patients to use 1 mg (1 unit) for adults and 1/2 the adult dose (0.5 mg) [0.5 unit] for pediatric patients weighing less than 44 lb (20 kg).

Patients and family members should be informed of the following measures to prevent hypoglycemic reactions due to insulin:

To prevent severe hypoglycemia, patients and family members should be informed of the symptoms of mild hypoglycemia and how to treat it appropriately.

Family members should be informed to arouse the patient as quickly as possible because prolonged hypoglycemia may result in damage to the central nervous system. Glucagon or intravenous glucose should awaken the patient sufficiently so that oral carbohydrates may be taken.

Patients should be advised to inform their physician when hypoglycemic reactions occur so that the treatment regimen may be adjusted if necessary.

Blood glucose determinations should be obtained to follow the patient with hypoglycemia until patient is asymptomatic.

Because glucagon is usually given in a single dose and has a very short half-life, no studies have been done regarding carcinogenesis. In a series of studies examining effects on the bacterial mutagenesis (Ames) assay, it was determined that in colony counts was related to technical difficulties in running this assay with peptides and was not due to mutagenic activities of the glucagon. an increase

Reproduction studies have been performed in rats at doses up to 2 mg/kg glucagon administered two times a day (up to 40 times the human dose based on body surface area, mg/m ) and have revealed no evidence of impaired fertility. 2

— Reproduction studies have not been performed with recombinant glucagon. However, studies with animal-sourced glucagon were performed in rats at doses up to 2 mg/kg glucagon administered two times a day (up to 40 times the human dose based on body surface area, mg/m ), and have revealed no evidence of impaired fertility or harm to the fetus due to glucagon. There are, however, no adequate and well-controlled studies in pregnant women. Because animal reproduction studies are not always predictive of human response, this drug should be used during pregnancy only if clearly needed. Pregnancy Category B2

For the treatment of hypoglycemia: The use of glucagon in pediatric patients has been reported to be safe and effective. 2-6

For use as a diagnostic aid: Effectiveness has not been established in pediatric patients.

Clinical studies of glucagon did not include sufficient numbers of subjects aged 65 and over to determine whether they respond differently from younger subjects. Other reported clinical experience has not identified differences in responses between the elderly and younger patients. In general, dose selection for an elderly patient should be cautious, usually starting at the low end of the dosing range, reflecting the greater frequency of decreased hepatic, renal, or cardiac function, and of concomitant disease or other drug therapy.

Severe adverse reactions are very rare, although nausea and vomiting may occur occasionally. These reactions may also occur with hypoglycemia. Generalized allergic reactions have been reported ( ). In a three month controlled study of 75 volunteers comparing animal-sourced glucagon with glucagon manufactured through rDNA technology, no glucagon-specific antibodies were detected in either treatment group. seeWARNINGS

— If overdosage occurs, nausea, vomiting, gastric hypotonicity, and diarrhea would be expected without causing consequential toxicity. Signs and Symptoms

When glucagon was given in large doses to patients with cardiac disease, investigators reported a positive inotropic effect. These investigators administered glucagon in doses of 0.5 to 16 mg/hour by continuous infusion for periods of 5 to 166 hours. Total doses ranged from 25 to 996 mg, and a 21-month-old infant received approximately 8.25 mg in 165 hours. Side effects included nausea, vomiting, and decreasing serum potassium concentration. Serum potassium concentration could be maintained within normal limits with supplemental potassium.

The intravenous median lethal dose for glucagon in mice and rats is approximately 300 mg/kg and 38.6 mg/kg, respectively.

Because glucagon is a polypeptide, it would be rapidly destroyed in the gastrointestinal tract if it were to be accidentally ingested.

— To obtain up-to-date information about the treatment of overdose, a good resource is your certified Regional Poison Control Center. Telephone numbers of certified poison control centers are listed in the . In managing overdosage, consider the possibility of multiple drug overdoses, interaction among drugs, and unusual drug kinetics in your patient. TreatmentPhysicians' Desk Reference (PDR)

In view of the extremely short half-life of glucagon and its prompt destruction and excretion, the treatment of overdosage is symptomatic, primarily for nausea, vomiting, and possible hypokalemia.

If the patient develops a dramatic increase in blood pressure, 5 to 10 mg of phentolamine mesylate has been shown to be effective in lowering blood pressure for the short time that control would be needed.

Forced diuresis, peritoneal dialysis, hemodialysis, or charcoal hemoperfusion have not been established as beneficial for an overdose of glucagon; it is extremely unlikely that one of these procedures would ever be indicated.

General Instructions for Use:

Directions for Treatment of Severe Hypoglycemia:

Severe hypoglycemia should be treated initially with intravenous glucose, if possible.

Directions for Use as a Diagnostic Aid:

Dissolve the lyophilized glucagon using the accompanying diluting solution and use immediately. Discard any unused portion.

The doses in the following table may be administered for relaxation of the stomach, duodenum, and small bowel, depending on the onset and duration of effect required for the examination. Since the stomach is less sensitive to the effect of glucagon, 0.5 mg (0.5 units) IV or 2 mg (2 units) IM are recommended.

For examination of the colon, it is recommended that a 2 mg (2 units) dose be administered intramuscularly approximately 10 minutes prior to the procedure. Colon relaxation and reduction of patient discomfort may allow the radiologist to perform a more satisfactory examination.

— Vials of Glucagon, as well as the Diluting Solution for Glucagon, may be stored at controlled room temperature 20° to 25°C (68° to 77°F)[see USP]. Before Reconstitution

The USP defines controlled room temperature by the following: A temperature maintained thermostatically that encompasses the usual and customary working environment of 20° to 25°C (68° to 77°F); that results in a mean kinetic temperature calculated to be not more than 25°C; and that allows for excursions between 15° and 30°C (59° and 86°F) that are experienced in pharmacies, hospitals, and warehouses.

— Glucagon for Injection (rDNA origin) should be used immediately. After ReconstitutionDiscard any unused portion.

INFORMATION FOR THE USER


BECOME FAMILIAR WITH THE FOLLOWING INSTRUCTIONS BEFORE AN EMERGENCY ARISES. DO NOT USE THIS KIT AFTER DATE STAMPED ON THE BOTTLE LABEL. IF YOU HAVE QUESTIONS CONCERNING THE USE OF THIS PRODUCT, CONSULT A DOCTOR, NURSE OR PHARMACIST.

Show your family members and others where you keep this kit and how to use it. They need to know how to use it before you need it. They can practice giving a shot by giving you your normal insulin shots. It is important that they practice. A person who has never given a shot probably will not be able to do it in an emergency.

THE PATIENT MAY BE IN A COMA FROM SEVERE HYPERGLYCEMIA (HIGH BLOOD GLUCOSE) RATHER THAN HYPOGLYCEMIA. IN SUCH A CASE, THE PATIENT WILL RESPOND TO GLUCAGON AND REQUIRES IMMEDIATE MEDICAL ATTENTION. WARNING:NOT

TO PREPARE GLUCAGON FOR INJECTION

If not treated, the patient may progress to severe hypoglycemia that can include:

The occurrence of early symptoms calls for prompt and, if necessary, repeated administration of some form of carbohydrate. Patients should always carry a quick source of sugar, such as candy mints or glucose tablets. The prompt treatment of mild hypoglycemic symptoms can prevent severe hypoglycemic reactions. If the patient does not improve or if administration of carbohydrate is impossible, glucagon should be given or the patient should be treated with intravenous glucose at a medical facility. Glucagon, a naturally occurring substance produced by the pancreas, is helpful because it enables the patient to produce his/her own blood glucose to correct the hypoglycemia.

Severe side effects are very rare, although nausea and vomiting may occur occasionally.

A few people may be allergic to glucagon or to one of the inactive ingredients in glucagon, or may experience rapid heart beat for a short while.

If you experience any other reactions which are likely to have been caused by glucagon, please contact your doctor.

Before dissolving glucagon with diluting solution — Store the kit at controlled room temperature between 20° to 25°C (68° to 77°F).

After dissolving glucagon with diluting solution — Should be used immediately. Solutions should be clear and of a water-like consistency at time of use. Discard any unused portion. 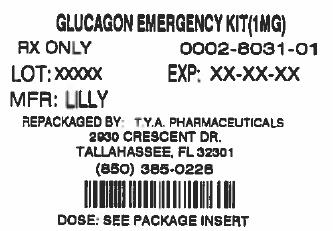