Erythromycin Ophthalmic Ointment USP belongs to the macrolide group of antibiotics. The sterile ophthalmic ointment flows freely over the conjunctiva. Erythromycin base, as crystals or powder, is slightly soluble in water, moderately soluble in ether, and readily soluble in alcohol or chloroform. Erythromycin is an antibiotic produced from a strain of Streptomyces erythraeus. It is basic and readily forms a salt when combined with an acid. It has the following structural formula: 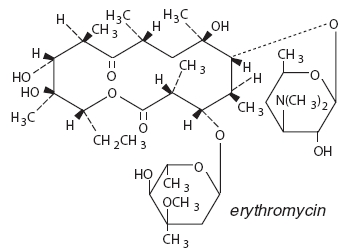 
For the treatment of superficial ocular infections involving the conjunctiva and/or cornea caused by organisms susceptible to erythromycin.


This drug is contraindicated in patients with a history of hypersensitivity to erythromycin.


In the treatment of superficial ocular infections, erythromycin ophthalmic ointment approximately 1 cm in length should be applied directly to the infected eye(s) up to six times daily, depending on the severity of the infection.


Erythromycin Ophthalmic Ointment USP, 0.5% is available in the following sizes:

DO NOT USE IF CAP AND NECK RING ARE NOT INTACT. 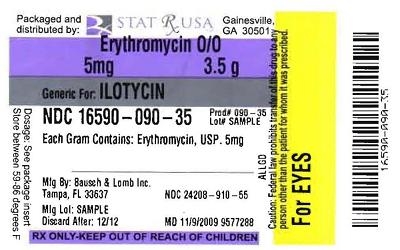