Rx only
FOR INTRANASAL USE ONLY.

2. The change in structure of arginine vasopressin to desmopressin acetate has resulted in a decreased vasopressor action and decreased actions on visceral smooth muscle relative to the enhanced antidiuretic activity, so that clinically effective antidiuretic doses are usually below threshold levels for effects on vascular or visceral smooth muscle.

3. Desmopressin acetate administered intranasally has an antidiuretic effect about one-tenth that of an equivalent dose administered by injection.

Desmopressin acetate nasal solution is indicated as antidiuretic replacement therapy in the management of central cranial diabetes insipidus and for management of the temporary polyuria and polydipsia following head trauma or surgery in the pituitary region. It is ineffective for the treatment of nephrogenic diabetes insipidus.

There are reports of an occasional change in response with time, usually greater than 6 months. Some patients may show a decreased responsiveness, others a shortened duration of effect. There is no evidence this effect is due to the development of binding antibodies but may be due to a local inactivation of the peptide.

Patients are selected for therapy by establishing the diagnosis by means of the water deprivation test, the hypertonic saline infusion test, and/or the response to antidiuretic hormone. Continued response to intranasal desmopressin acetate can be monitored by urine volume and osmolality.

Desmopressin acetate nasal solution is also available as a solution for injection when the intranasal route may be compromised. These situations include nasal congestion and blockage, nasal discharge, atrophy of nasal mucosa, and severe atrophic rhinitis. Intranasal delivery may also be inappropriate where there is an impaired level of consciousness. In addition, cranial surgical procedures, such as transsphenoidal hypophysectomy create situations where an alternative route of administration is needed as in cases of nasal packing or recovery from surgery.

Desmopressin acetate nasal solution is contraindicated in patients with moderate to severe renal impairment (defined as a creatinine clearance below 50ml/min).

Desmopressin acetate nasal solution is contraindicated in patients with hyponatremia or a history of hyponatremia.

Intranasal desmopressin acetate at high dosage has infrequently produced a slight elevation of blood pressure, which disappeared with a reduction in dosage. The drug should be used with caution in patients with coronary artery insufficiency and/or hypertensive cardiovascular disease because of possible rise in blood pressure.

Desmopressin acetate should be used with caution in patients with conditions associated with fluid and electrolyte imbalance, such as cystic fibrosis, because these patients are prone to hyponatremia.

Ensure that in children administration is under adult supervisionin order to control the dose intake. Patients should be informed that the desmopressin acetate nasal solution bottle accurately delivers 50 doses of 10 μg each. Any solution remaining after 50 doses should be discarded since the amount delivered thereafter may be substantially less than 10 μg of drug. No attempt should be made to transfer remaining solution to another bottle. Patients should be instructed to read accompanying directions on use of the spray pump carefully before use.

Fluid intake should be adjusted downward based upon discussion with the physician.

Laboratory tests for following the patient with central cranial diabetes insipidus or post-surgical or head trauma-related polyuria and polydipsia include urine volume and osmolality. In some cases plasma osmolality measurements may be required.

Although the pressor activity of intranasal desmopressin acetate is very low compared to the antidiuretic activity, use of large doses of intranasal desmopressin acetate with other pressor agents should only be done with careful patient monitoring. The concomitant administration of drugs that may increase the risk of water intoxication with hyponatremia, (e.g. tricyclic antidepressants, selective serotonin re-uptake inhibitors, chlorpromazine, opiate analgesics, NSAIDs, lamotrigine and carbamazepine) should be performed with caution.

Studies with desmopressin acetate have not been performed to evaluate carcinogenic potential, mutagenic potential or effects on fertility.

Fertility studies have not been done. Teratology studies in rats and rabbits at doses from 0.05 to 10 μg/kg/day (approximately 0.1 times the maximum systemic human exposure in rats and up to 38 times the maximum systemic human exposure in rabbits based on surface area, mg/m2) revealed no harm to the fetus due to desmopressin acetate. There are, however no adequate and well controlled studies in pregnant women. Because animal reproduction studies are not always predictive of human response, this drug should be used during pregnancy only if clearly needed. Several publications of desmopressin acetate's use in the management of diabetes insipidus during pregnancy are available; these include a few anecdotal reports of congenital anomalies and low birth weight babies. However, no causal connection between these events and desmopressin acetate has been established. A 15-year, Swedish epidemiologic study of the use of desmopressin acetate in pregnant women with diabetes insipidus found the rate of birth defects to be no greater than that in the general population; however, the statistical power of this study is low. As opposed to preparations containing natural hormones, desmopressin acetate in antidiuretic doses has no uterotonic action and the physician will have to weigh the therapeutic advantages against the possible risks in each case.

There have been no controlled studies in nursing mothers. A single study in a postpartum woman demonstrated a marked change in plasma, but little if any change in assayable desmopressin acetate in breast milk following an intranasal dose of 10 μg. It is not known whether this drug is excreted in human milk. Because many drugs are excreted in human milk, caution should be exercised when desmopressin acetate is administered to a nursing woman.

Desmopressin acetate has been used in children with diabetes insipidus. Use in infants and children will require careful fluid intake restriction to prevent possible hyponatremia and water intoxication. The dose must be individually adjusted to the patient with attention in the very young to the danger of an extreme decrease in plasma osmolality with resulting convulsions. Dose should start at 0.05 mL or less.

Clinical studies of desmopressin acetate nasal solution did not include sufficient numbers of subjects aged 65 and over to determine whether they respond differently from younger subjects. Other reported clinical experience had not identified differences in responses between the elderly and younger subjects. In general, dose selection for an elderly patient should be cautious, usually starting at the low end of the dosing range, reflecting the greater frequency of decreased hepatic, renal, or cardiac function, and of concomitant disease or drug therapy.

This drug is known to be substantially excreted by the kidney, and the risk of toxic reactions to this drug may be greater in patients with impaired renal function. Because elderly patients are more likely to have decreased renal function, care should be taken in dose selection, and it may be useful to monitor renal function. Desmopressin acetate nasal solution is contraindicated in patients with moderate to severe renal impairment (defined as a creatinine clearance below 50ml/min). (See CLINICAL PHARMACOLOGY:, Human Pharmacokinetics and CONTRAINDICATION:.)

There are reports of an occasional change in response with time, usually greater than 6 months. Some patients may show a decreased responsiveness, others a shortened duration of effect. There is no evidence this effect is due to the development of binding antibodies but may be due to a local inactivation of the peptide.

The following table lists the percentage of patients having adverse experiences without regard to relationship to study drug from the pooled pivotal study data for nocturnal enuresis.

Post Marketing: There have been rare reports of hyponatremic convulsions associated with concomitant use with the following medications: oxybutinin and imipramine.

See WARNINGS for the possibility of water intoxication and hyponatremia.

Signs of overdose may include confusion, drowsiness, continuing headache, problems withpassing urine and rapid weight gain due to fluid retention. (See WARNINGS:.) In case of overdosage, the dose should be reduced, frequency of administration decreased, or the drug withdrawn according to the severity of the condition. There is no known specific antidote for desmopressin acetate or desmopressin acetate nasal solution. An oral LD50 has not been established. An intravenous dose of 2 mg/ kg in mice demonstrated no effect.

The nasal spray pump can only deliver doses of 0.1 mL (10 μg) or multiples of 0.1 mL. If doses other than these are required, the rhinal tube delivery system may be used. The spray pump must be primed prior to the first use. To prime pump, press down five (5) times. The bottle will now deliver 10 μg of drug per spray. Discard desmopressin acetate nasal solution after 50 sprays since the amount delivered thereafter per spray may be substantially less than 10 μg of drug.

Geriatric Use: This drug is known to be substantially excreted by the kidney, and the risk of toxic reactions to this drug may be greater in patients with impaired renal function. Because elderly patients are more likely to have decreased renal function, care should be taken in dose selection, and it may be useful to monitor renal function. (See CLINICAL PHARMACOLOGY:, Human Pharmacokinetics, CONTRAINDICATION:, and PRECAUTIONS:, Geriatric Use:.)

Desmopressin Acetate Nasal Solution, 0.01% is supplied in a bottle with nasal pump dispenser with dust cover and with patient instructions in the following size:

FOR INTRANASAL USE ONLY

Your doctor has prescribed desmopressin acetate nasal solution as antidiuretic hormone replacement therapy. Follow the dosage schedule that is specified. The convenient nasal spray pump provides an efficient, reliable way to administer your medication. It is important, however, to adhere completely to the following instructions so that you will always receive a consistent dose of your medication.

CAUTION: The nasal spray pump accurately delivers 50 sprays of 10 micrograms each. Any solution remaining after 50 sprays should be discarded since the amount delivered in each spray thereafter may be substantially less than 10 micrograms of the drug. Do not transfer any remaining solution to another bottle. Please read the following instructions carefully before using the spray pump.

Ensure that in children administration is under adult supervision in order to control the dose intake.

If you accidentally deliver/administer too much of a dose, immediately telephone your doctor or a certified Regional Poison Center for advice. Possible signs of overdose may include confusion, drowsiness, continuing headache, problems with passing urine and rapid weight gain due to fluid retention. 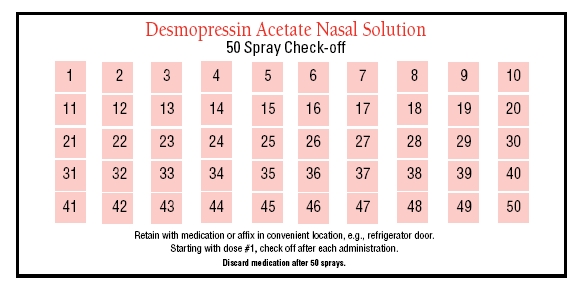 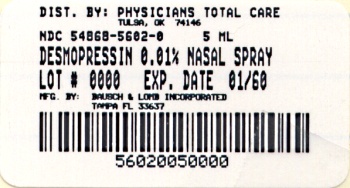