Chemically, metaxalone is 5-[(3,5-dimethylphenoxy) methyl]-2-oxazolidinone. The molecular formula is C12H15NO3, which corresponds to a molecular weight of 221.25. The structural formula is: 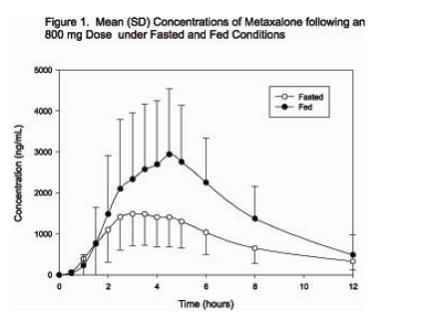 Inform patients that metaxalone tablets could cause a rare but potentially life-threatening condition resulting from administration of doses higher than the recommended dose or from concomitant administration of serotonergic drugs with metaxalone tablets used within the recommended dosage range. Warn patients of the symptoms of serotonin syndrome and to seek medical attention right away if symptoms develop. Instruct patients to inform their healthcare providers if they are taking, or plan to take, serotonergic medications (see WARNINGS, PRECAUTIONS: Drug Interactions, and OVERDOSAGE).

SEALED FOR YOUR PROTECTION.