to control emotional
and somatic factors
in gastrointestinal disorders

Chlordiazepoxide HCl/Clidinium Bromide combines in a single capsule formulation the antianxiety action of chlordiazepoxide hydrochloride and the anticholinergic/spasmolytic effects of clidinium bromide, both exclusive developments of Roche research. 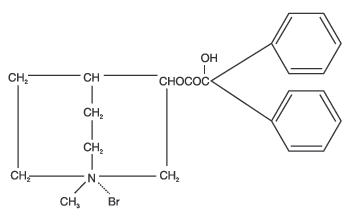 Chlordiazepoxide hydrochloride has been studied extensively in many species of animals and these studies are suggestive of action on the limbic system of the brain, which recent evidence indicates is involved in emotional responses.

Hostile monkeys were made tame by oral drug doses which did not cause sedation. Chlordiazepoxide hydrochloride revealed a "taming" action with the elimination of fear and aggression. The taming effect of chlordiazepoxide hydrochloride was further demonstrated in rats made vicious by lesions in the septal area of the brain. The drug dosage which effectively blocked the vicious reaction was well below the dose which caused sedation in these animals.

The oral LD50 of single doses of chlordiazepoxide hydrochloride, calculated according to the method of Miller and Tainter, is 720 ± 51 mg/kg as determined in mice observed over a period of 5 days following dosage.

Clidinium bromide is an effective anticholinergic agent with activity approximating that of atropine sulfate against acetylcholine-induced spasms in isolated intestinal strips. On oral administration in mice it proved an effective antisialagogue in preventing pilocarpine-induced salivation. Spontaneous intestinal motility in both rats and dogs is reduced following oral dosing with 0.1 to 0.25 mg/kg. Potent cholinergic ganglionic blocking effects (vagal) are produced with intravenous usage in anesthetized dogs.

The oral LD50 of single doses of clidinium bromide is 860 ± 57 mg/kg as determined in mice observed over a period of 5 days following dosage; the calculations were made according to the method of Miller and Tainter.

Two series of reproduction experiments with clidinium bromide were carried out in rats, employing dosages of 2.5 and 10 mg/kg daily in each experiment. In the first experiment clidinium bromide was administered for a 9-week interval prior to mating; no untoward effect on fertilization or gestation was noted. The offspring were taken by caesarean section and did not show a significant incidence of congenital anomalies when compared to control animals. In the second experiment adult animals were given clidinium bromide for 10 days prior to and through two mating cycles. No significant effects were observed on fertility, gestation, viability of offspring or lactation, as compared to control animals, nor was there a significant incidence of congenital anomalies in the offspring derived from these experiments.

A reproduction study of Chlordiazepoxide HCl/Clidinium Bromide was carried out in rats through two successive matings. Oral daily doses were administered in two concentrations: 2.5 mg/kg chlordiazepoxide hydrochloride with 1.25 mg/kg clidinium bromide or 25 mg/kg chlordiazepoxide hydrochloride with 12.5 mg/kg clidinium bromide. In the first mating no significant differences were noted between the control or the treated groups, with the exception of a slight decrease in the number of animals surviving during lactation among those receiving the highest dosage. As with all anticholinergic drugs, an inhibiting effect on lactation may occur. In the second mating similar results were obtained except for a slight decrease in the number of pregnant females and in the percentage of offspring surviving until weaning. No congenital anomalies were observed in both matings in either the control or treated groups. Additional animal reproduction studies are in progress.

Based on a review of this drug by the National Academy of Sciences — National Research Council and/or other information, FDA has classified the indications as follows:

Chlordiazepoxide HCl/Clidinium Bromide is contraindicated in the presence of glaucoma (since the anticholinergic component may produce some degree of mydriasis) and in patients with prostatic hypertrophy and benign bladder neck obstruction. It is contraindicated in patients with known hypersensitivity to chlordiazepoxide hydrochloride and/or clidinium bromide.

As in the case of other preparations containing CNS-acting drugs, patients receiving Chlordiazepoxide HCl/Clidinium Bromide should be cautioned about possible combined effects with alcohol and other CNS depressants. For the same reason, they should be cautioned against hazardous occupations requiring complete mental alertness such as operating machinery or driving a motor vehicle.

In debilitated patients, it is recommended that the dosage be limited to the smallest effective amount to preclude the development of ataxia, oversedation or confusion (not more than 2 Chlordiazepoxide HCl/Clidinium Bromide capsules per day initially, to be increased gradually as needed and tolerated). In general, the concomitant administration of Chlordiazepoxide HCl/Clidinium Bromide and other psychotropic agents is not recommended. If such combination therapy seems indicated, careful consideration should be given to the pharmacology of the agents to be employed — particularly when the known potentiating compounds such as the MAO inhibitors and phenothiazines are to be used. The usual precautions in treating patients with impaired renal or hepatic function should be observed.

Geriatric subjects may be particularly prone to experiencing drowsiness, ataxia and confusion while receiving Chlordiazepoxide HCl/Clidinium Bromide. These effects can usually be avoided with proper dosage adjustment, although they have occasionally been observed even at the lower dosage ranges. Dosing in geriatric subjects should be initiated cautiously (no more than 2 capsules per day) and increased gradually if needed and tolerated (see DOSAGE AND ADMINISTRATION). Chlordiazepoxide HCl/Clidinium Bromide is contraindicated in the presence of glaucoma, prostatic hypertrophy and benign bladder neck obstruction (see CONTRAINDICATIONS).

No side effects or manifestations not seen with either compound alone have been reported with the administration of Chlordiazepoxide HCl/Clidinium Bromide. However, the possibility of untoward effects which may be seen with either of these two compounds cannot be excluded.

When chlordiazepoxide hydrochloride has been used alone the necessity of discontinuing therapy because of undesirable effects has been rare. Drowsiness, ataxia and confusion have been reported in some patients — particularly the elderly and debilitated. While these effects can be avoided in almost all instances by proper dosage adjustment, they have occasionally been observed at the lower dosage ranges. In a few instances syncope has been reported.

Adverse effects reported with use of Chlordiazepoxide HCl/Clidinium Bromide are those typical of anticolinergic agents, ie, dryness of the mouth, blurring of vision, urinary hesitancy and constipation. Constipation has occurred most often when Chlordiazepoxide HCl/Clidinium Bromide therapy has been combined with other spasmolytic agents and/or a low residue diet.

Withdrawal symptoms, similar in character to those noted with barbiturates and alcohol (convulsions, tremor, abdominal and muscle cramps, vomiting and sweating), have occurred following abrupt discontinuance of chlordiazepoxide. The more severe withdrawal symptoms have usually been limited to those patients who had received excessive doses over an extended period of time. Generally milder withdrawal symptoms (eg, dysphoria and insomnia) have been reported following abrupt discontinuance of benzodiazepines taken continuously at therapeutic levels for several months. Consequently, after extended therapy, abrupt discontinuation should generally be avoided and a gradual dosage tapering schedule followed. Addiction-prone individuals (such as drug addicts or alcoholics) should be under careful surveillance when receiving chlordiazepoxide or other psychotropic agents because of the predisposition of such patients to habituation and dependence.

Because of the varied individual responses to tranquilizers and anticholinergics, the optimum dosage of Chlordiazepoxide HCl/Clidinium Bromide varies with the diagnosis and response of the individual patient. The dosage, therefore, should be individualized for maximum beneficial effects. The usual maintenance dose is 1 or 2 capsules, 3 or 4 times a day administered before meals and at bedtime.

Dosage should be limited to the smallest effective amount to preclude the development of ataxia, oversedation or confusion. The initial dose should not exceed 2 Chlordiazepoxide HCl/Clidinium Bromide capsules per day, to be increased gradually as needed and tolerated. 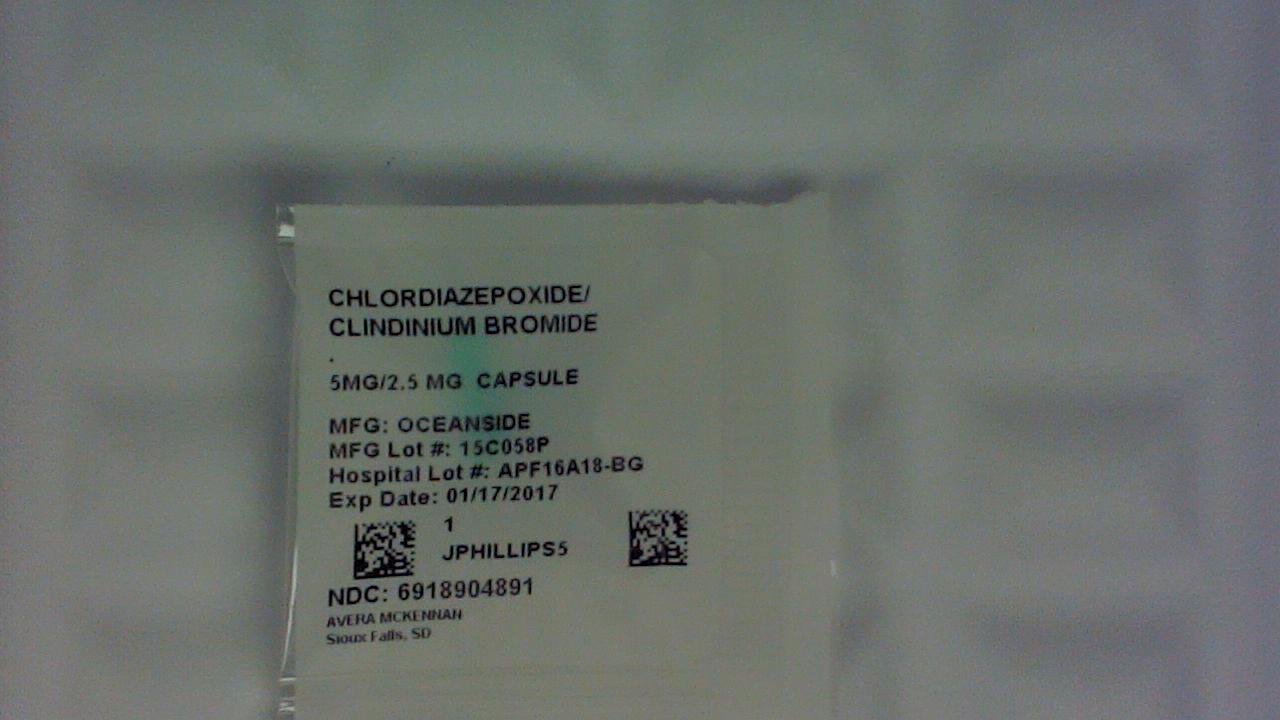