Permethrin Cream 5% is a topical scabicidal agent for the treatment of infestation with Sarcoptes scabiei (scabies). It is available in a white to off-white, vanishing cream base.

Permethrin cream is for topical use only.

Chemical Name: The permethrin used is an approximate 1:3 mixture of the cis and trans isomers of the pyrethroid 3-(2,2-dichloroethenyl)- 2,2-dimethylcyclopropanecarboxylic acid, (3-phenoxyphenyl) methyl ester. Permethrin has a molecular formula of C21H20Cl2O3 and a molecular weight of 391.29. It is a yellow to light orange-brown, low melting solid or viscous liquid.

Permethrin cream is indicated for the treatment of infestation with Sarcoptes scabiei (scabies).

Permethrin cream is contraindicated in patients with known hypersensitivity to any of its components, to any synthetic pyrethroid or pyrethrin.

If hypersensitivity to permethrin cream occurs, discontinue use.

Scabies infestation is often accompanied by pruritis, edema and erythema. Treatment with permethrin cream may temporarily exacerbate these conditions.

Pregnancy Category B: Reproduction studies have been performed in mice, rats, and rabbits (200 to 400 mg/kg/day orally) and have revealed no evidence of impaired fertility or harm to the fetus due to permethrin. There are, however, no adequate and well-controlled studies in pregnant women. Because animal reproduction studies are not always predictive of human response, this drug should be used during pregnancy only if clearly needed.

Clinical studies of permethrin cream did not identify sufficient numbers of subjects aged 65 and over to allow a definitive statement regarding whether elderly subjects respond differently from younger subjects. Other reported clinical experience has not identified differences in responses between the elderly and younger patients. This drug is known to be substantially excreted by the kidney. However, since topical permethrin is metabolized in the liver and excreted in the urine as inactive metabolites, there does not appear to be an increased risk of toxic reactions in patients with impaired renal function when used as labeled.

In clinical trials, generally mild and transient burning and stinging followed application with permethrin cream in 10% of patients and was associated with the severity of infestation. Pruritis was reported in 7% of patients at various times post-application. Erythema, numbness, tingling, and rash were reported in 1 to 2% or less of patients (see PRECAUTIONS: General).

No instance of accidental ingestion of permethrin cream has been reported. If ingested, gastric lavage and general supportive measures should be employed.

Adults and children: Thoroughly massage permethrin cream into the skin from the head to the soles of the feet. Scabies rarely infests the scalp of adults, although the hairline, neck, temple, and forehead may be infested in infants and geriatric patients. Usually 30 grams is sufficient for an average adult. The cream should be removed by washing (shower or bath) after 8 to 14 hours. Infants should be treated on the scalp, temple and forehead. ONE APPLICATION IS GENERALLY CURATIVE.

Patients may experience persistent pruritus after treatment. This is rarely a sign of treatment failure and is not an indication for retreatment. Demonstrable living mites after 14 days indicate that retreatment is necessary.

For External Use Only

Not For Use In Eyes 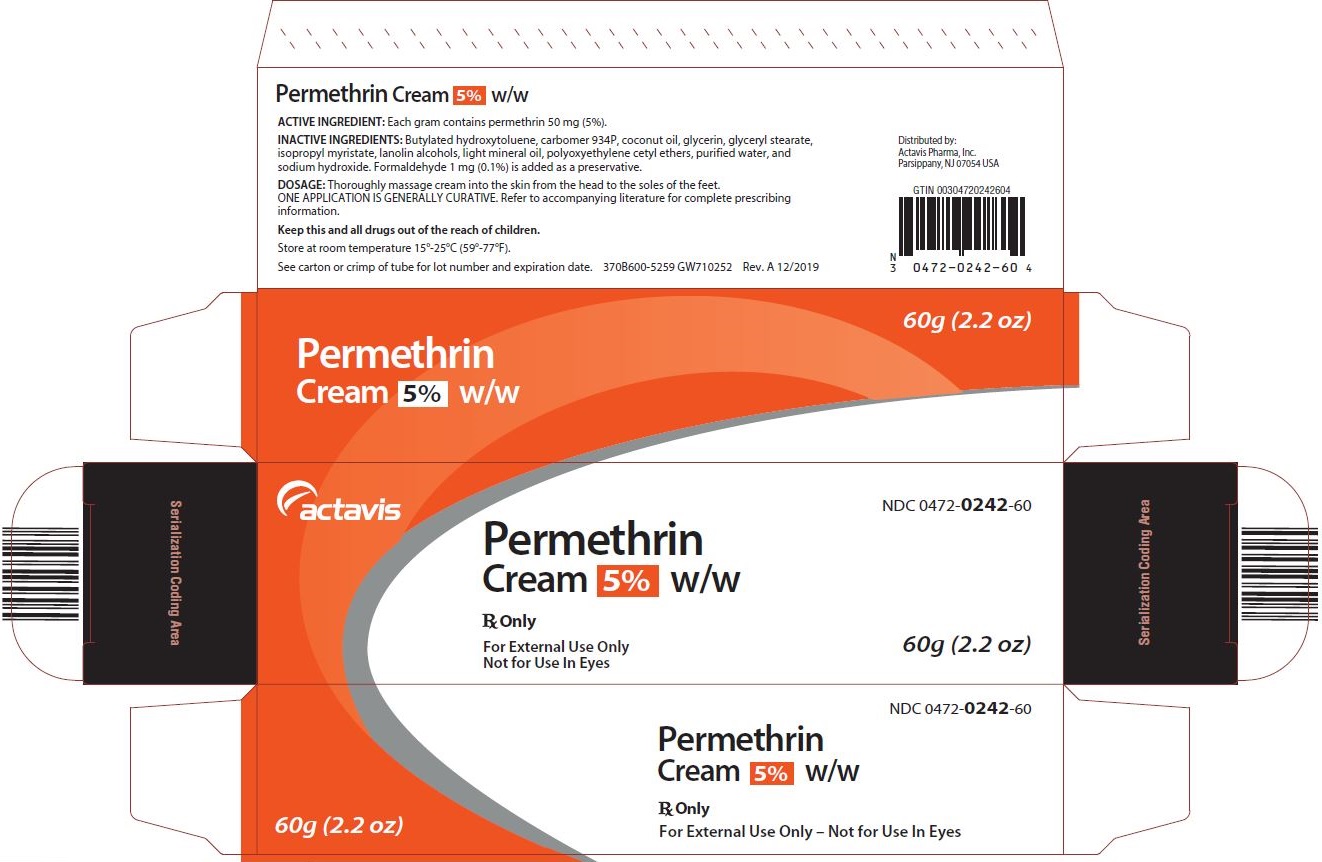