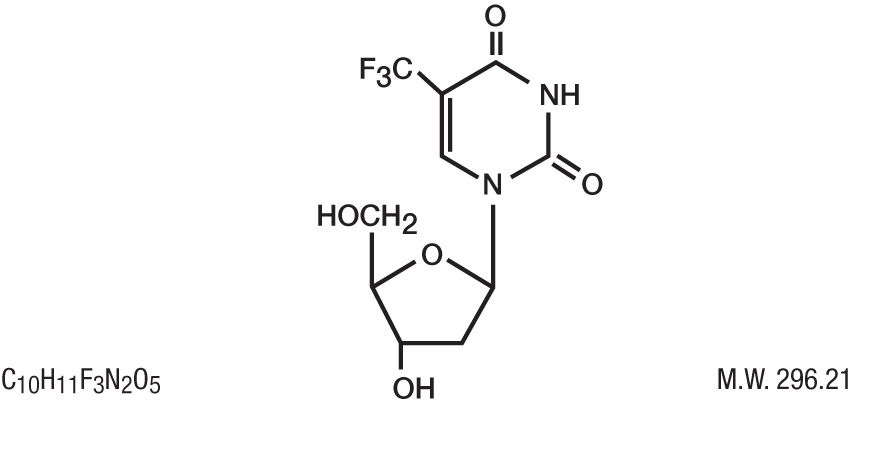 Trifluridine sterile ophthalmic solution contains 1% trifluridine in an aqueous solution with acetic acid and sodium acetate (buffers), sodium chloride, and thimerosal 0.001% (added as a preservative). The pH range is 5.5 to 6.0 and osmolality is approximately 283 mOsm.

CLINICAL PHARMACOLOGY: Trifluridine is a fluorinated pyrimidine nucleoside with in vitro and in vivo activity against herpes simplex virus, types 1 and 2 and vacciniavirus. Some strains of adenovirus are also inhibited in vitro.

Trifluridine is also effective in the treatment of epithelial keratitis that has not responded clinically to the topical administration of idoxuridine or when ocular toxicity or hypersensitivity to idoxuridine has occurred. In a smaller number of patients found to be resistant to topical vidarabine, trifluridine was also effective.

Trifluridine interferes with DNA synthesis in cultured mammalian cells. However, its antiviral mechanism of action is not completely known.

In vitro perfusion studies on excised rabbit corneas have shown that trifluridine penetrates the intact cornea as evidenced by recovery of parental drug and its major metabolite, 5-carboxy-2´-deoxyuridine, on the endothelial side of the cornea. Absence of the corneal epithelium enhances the penetration of trifluridine approximately two-fold.

Systemic absorption of trifluridine following therapeutic dosing with trifluridine appears to be negligible. No detectable concentrations of trifluridine or 5-carboxy-2´-deoxyuridine were found in the sera of adult healthy normal subjects who had trifluridine instilled into their eyes seven times daily for 14 consecutive days.

In other clinical studies, trifluridine was evaluated in the treatment of herpes simplex virus keratitis in patients who were unresponsive or intolerant to the topical administration of idoxuridine or vidarabine. Trifluridine was effective in 138 of 150 (92%) patients (109 of 114 with dendritic and 29 of 36 with geographic ulcers) as evidenced by corneal re-epithelialization. The mean time to corneal re-epithelialization was 6 days for patients with dendritic ulcers and 12 days for patients with geographic ulcers.

The clinical efficacy of trifluridine in the treatment of stromal keratitis and uveitis due to herpes simplex virus or ophthalmic infections caused by vacciniavirus and adenovirus has not been established by well-controlled clinical trials. Trifluridine has not been shown to be effective in the prophylaxis of herpes simplex virus keratoconjunctivitis and epithelial keratitis by well-controlled clinical trials. Trifluridine is not effective against bacterial, fungal or chlamydial infections of the cornea or nonviral trophic lesions.

INDICATIONS AND USAGE: Trifluridine Ophthalmic Solution is indicated for the treatment of primary keratoconjunctivitis and recurrent epithelial keratitis due to herpes simplex virus, types 1 and 2.

WARNINGS: The recommended dosage and frequency of administration should not be exceeded (See DOSAGE AND ADMINISTRATION).

PRECAUTIONS: General: Trifluridine Ophthalmic Solution should be prescribed only for patients who have a clinical diagnosis of herpetic keratitis.

Trifluridine may cause mild local irritation of the conjunctiva and cornea when instilled but these effects are usually transient.

Carcinogenesis, Mutagenesis, Impairment of Fertility: Mutagenic Potential: Trifluridine has been shown to exert mutagenic, DNA-damaging and cell-transforming activities in various standard in vitro test systems, and clastogenic activity in Vicia faba cells. It did not induce chromosome aberrations in bone marrow cells of male or female rats following a single subcutaneous dose of 100 mg/kg, but was weakly positive in female, but not in male, rats following daily subcutaneous administration at 700mg/kg/day for 5 days.

Although the significance of these test results is not clear or fully understood, there exists the possibility that mutagenic agents may cause genetic damage in humans.

Pregnancy: Teratogenic Effects: Pregnancy Category C: Trifluridine was not teratogenic at doses up to 5 mg/kg/day (23 times the estimated human exposure) when given subcutaneously to rats and rabbits. However, fetal toxicity consisting of delayed ossification of portions of the skeleton occurred at dose levels of 2.5 and 5 mg /kg /day in rats and at 2.5 mg/kg/day in rabbits. In addition, both 2.5 and 5 mg/kg/day produced fetal death and resorption in rabbits. In both rats and rabbits, 1 mg/kg/day (5 times the estimated human exposure) was a no-effect level. There were no teratogenic or fetotoxic effects after topical application of trifluridine (approximately 5 times the estimated human exposure) to the eyes of rabbits on the 6th through the 18th days of pregnancy. In a non-standard test, trifluridine solution has been shown to be teratogenic when injected directly into the yolk sac of chicken eggs. There are no adequate and well-controlled studies in pregnant women. Trifluridine Ophthalmic Solution should be used during pregnancy only if the potential benefit justifies the potential risk to the fetus.

Nursing Mothers: It is unlikely that trifluridine is excreted in human milk after ophthalmic instillation of trifluridine because of the relatively small dosage (5mg/day), its dilution in body fluids and its extremely short half-life (approximately 12 minutes). The drug should not be prescribed for nursing mothers unless the potential benefits outweigh the potential risks.

Pediatric Use: Safety and effectiveness in pediatric patients below six years of age have not been established.

OVERDOSAGE: Overdosage by ocular instillation is unlikely because any excess solution should be quickly expelled from the conjunctival sac.

Acute overdosage by accidental oral ingestion of trifluridine has not occurred. However, should such ingestion occur, the 75 mg dosage of trifluridine in a 7.5 mL bottle of Trifluridine Ophthalmic Solution is not likely to produce adverse effects. Single intravenous doses of 1.5 to 30 mg/kg/day in children and adults with neoplastic disease produce reversible bone marrow depression as the only potentially serious toxic effect and only after three to five courses of therapy. The acute oral LD50 in the mouse and rat was 4379 mg/kg or higher.

DOSAGE AND ADMINISTRATION: Instill one drop of Trifluridine Ophthalmic Solution onto the cornea of the affected eye every 2 hours while awake for a maximum daily dosage of nine drops until the cornea ulcer has completely re-epithelialized. Following re-epithelialization, treatment for an additional 7 days of one drop every 4 hours while awake for a minimum daily dosage of five drops is recommended.

If there are no signs of improvement after 7 days of therapy or complete re-epithelialization has not occurred after 14 days of therapy, other forms of therapy should be considered. Continuous administration of trifluridine for periods exceeding 21 days should be avoided because of potential ocular toxicity.

ANIMAL PHARMACOLOGY AND ANIMAL TOXICOLOGY: Corneal wound healing studies in rabbits showed that trifluridine did not significantly retard closure of epithelial wounds. However, mild toxic changes such as intracellular edema of the basal cell layer, mild thinning of the overlying epithelium and reduced strength of stromal wounds were observed. 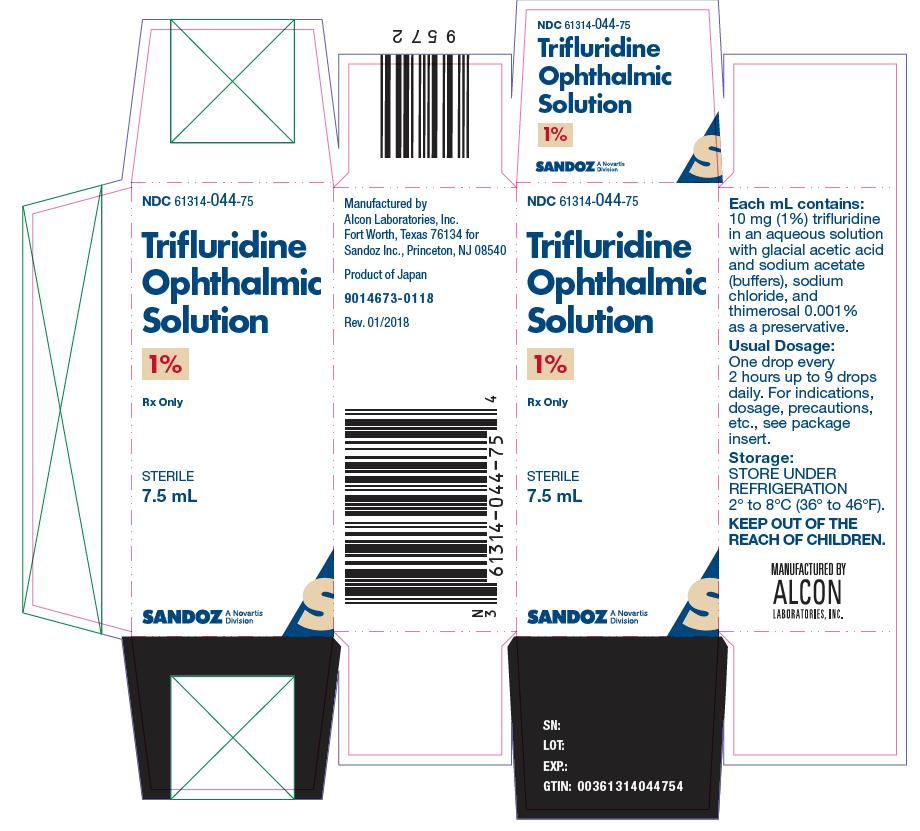