Pyrazinamide, the pyrazine analogue of nicotinamide, is an antituberculous agent. It is a white crystalline powder, stable at room temperature, and sparingly soluble in water. Pyrazinamide has the following structural formula: 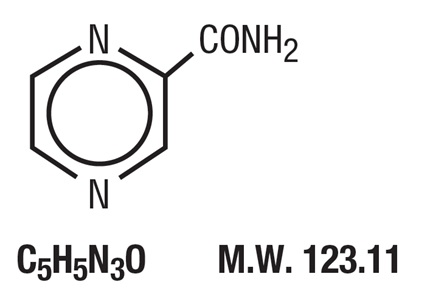 
Approximately 70% of an oral dose is excreted in urine, mainly by glomerular filtration within 24 hours.3


Pyrazinamide may be bacteriostatic or bactericidal against Mycobacterium tuberculosis depending on the concentration of the drug attained at the site of infection. The mechanism of action is unknown. In vitro and in vivo the drug is active only at a slightly acidic pH.

Pyrazinamide is indicated for the initial treatment of active tuberculosis in adults and children when combined with other antituberculous agents. (The current recommendation of the CDC for drug-susceptible disease is to use a six-month regimen for initial treatment of active tuberculosis, consisting of isoniazid, rifampin and pyrazinamide given for 2 months, followed by isoniazid and rifampin for 4 months. *4)


(Patients with drug-resistant disease should be treated with regimens individualized to their situation. Pyrazinamide frequently will be an important component of such therapy.)


(In patients with concomitant HIV infection, the physician should be aware of current recommendations of CDC. It is possible these patients may require a longer course of treatment.)


It is also indicated after treatment failure with other primary drugs in any form of active tuberculosis.


Pyrazinamide should only be used in conjunction with other effective antituberculous agents.

Pyrazinamide is contraindicated in persons:

Patients started on pyrazinamide should have baseline serum uric acid and liver function determinations. Those patients with preexisting liver disease or those at increased risk for drug related hepatitis (e.g., alcohol abusers) should be followed closely.


Pyrazinamide should be discontinued and not be resumed if signs of hepatocellular damage or hyperuricemia accompanied by an acute gouty arthritis appear.

Pyrazinamide inhibits renal excretion of urates, frequently resulting in hyperuricemia which is usually asymptomatic. If hyperuricemia is accompanied by acute gouty arthritis, pyrazinamide should be discontinued.


Pyrazinamide should be used with caution in patients with a history of diabetes mellitus, as management may be more difficult.

Patients should be instructed to notify their physicians promptly if they experience any of the following: fever, loss of appetite, malaise, nausea and vomiting, darkened urine, yellowish discoloration of the skin and eyes, pain or swelling of the joints.


Compliance with the full course of therapy must be emphasized, and the importance of not missing any doses must be stressed.

Baseline liver function studies [especially ALT (SGPT), AST (SGOT) determinations] and uric acid levels should be determined prior to therapy. Appropriate laboratory testing should be performed at periodic intervals and if any clinical signs or symptoms occur during therapy.

Pyrazinamide has been reported to interfere with ACETEST® and KETOSTIX® urine tests to produce a pink-brown color.5


Pyrazinamide was not mutagenic in the Ames bacterial test, but induced chromosomal aberrations in human lymphocyte cell cultures.

Pyrazinamide has been found in small amounts in breast milk. Therefore, it is advised that pyrazinamide be used with caution in nursing mothers taking into account the risk-benefit of this therapy.9

Clinical studies of pyrazinamide did not include sufficient numbers of patients aged 65 and over to determine whether they respond differently from younger patients. Other reported clinical experience has not identified differences in responses between the elderly and younger patients. In general, dose selection for an elderly patient should be cautious, usually starting at the low end of the dosing range, reflecting the greater frequency of decreased hepatic or renal function, and of concomitant disease or other drug therapy.


It does not appear that patients with impaired renal function require a reduction in dose. It may be prudent to select doses at the low end of the dosing range, however.13

The principal adverse effect is a hepatic reaction (see WARNINGS). Hepatotoxicity appears to be dose related, and may appear at any time during therapy. GI disturbances including nausea, vomiting and anorexia have also been reported.

Thrombocytopenia and sideroblastic anemia with erythroid hyperplasia, vacuolation of erythrocytes and increased serum iron concentration have occurred rarely with this drug. Adverse effects on blood clotting mechanisms have also been rarely reported.

Overdosage experience is limited. In one case report of overdose, abnormal liver function tests developed. These spontaneously reverted to normal when the drug was stopped. Clinical monitoring and supportive therapy should be employed. Pyrazinamide is dialyzable.13

Pyrazinamide should always be administered with other effective antituberculous drugs. It is administered for the initial 2 months of a 6-month or longer treatment regimen for drug-susceptible patients. Patients who are known or suspected to have drug-resistant disease should be treated with regimens individualized to their situation. Pyrazinamide frequently will be an important component of such therapy.


Patients with concomitant HIV infection may require longer courses of therapy. Physicians treating such patients should be alert to any revised recommendations from CDC for this group of patients.


Usual dose: Pyrazinamide is administered orally, 15 to 30 mg/kg once daily. Older regimens employed 3 to 4 divided doses daily, but most current recommendations are for once a day. Three grams per day should not be exceeded. The CDC recommendations do not exceed 2 g per day when given as a daily regimen (see table).


Alternatively, a twice weekly dosing regimen (50 to 70 mg/kg twice weekly based on lean body weight) has been developed to promote patient compliance with a regimen on an outpatient basis. In studies evaluating the twice weekly regimen, doses of pyrazinamide in excess of 3 g twice weekly have been administered. This exceeds the recommended maximum 3 g/daily dose. However, an increased incidence of adverse reactions has not been reported.


The table is taken from the CDC-American Thoracic Society joint recommendations:4

* Doses based on weight should be adjusted as weight changes.

**In persons older than 60 yrs of age the daily dose of streptomycin should be limited to 10 mg/kg with a maximal dose of 750 mg. 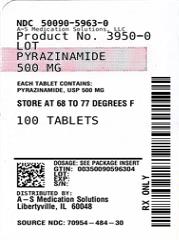