Leucovorin is one of several active, chemically reduced derivatives of folic acid.  It is useful as an antidote to drugs which act as folic acid antagonists.

Leucovorin Calcium for Injection is a sterile product indicated for intramuscular (IM) or intravenous (IV) administration and is supplied in 200 mg vials.

Each 200 mg vial of Leucovorin Calcium for Injection, when reconstituted with 20 mL of sterile diluent, contains leucovorin (as the calcium salt) 10 mg/mL.

The inactive ingredient is sodium chloride 180 mg/vial for the 200 mg.  Sodium hydroxide and/or hydrochloric acid may be added for pH adjustment.  pH adjusted to approximately 7.8.

There is 0.004 mEq of calcium per mg of leucovorin.  Solution contains no bacteriostat or antimicrobial agents.

Leucovorin is a mixture of the diastereoisomers of the 5-formyl derivative of tetrahydrofolic acid (THF). The biologically active compound of the mixture is the (-)-I-isomer, known as Citrovorum factor or (-)-folinic acid.  Leucovorin does not require reduction by the enzyme dihydrofolate reductase in order to participate in reactions utilizing folates as a source of “one-carbon” moieties.

In contrast, leucovorin can enhance the therapeutic and toxic effects of fluoropyrimidines used in cancer therapy, such as 5-fluorouracil.  Concurrent administration of leucovorin does not appear to alter the plasma pharmacokinetics of 5-fluorouracil. 5-Fluorouracil is metabolized to fluorodeoxyuridylic acid, which binds to and inhibits the enzyme thymidylate synthase (an enzyme important in DNA repair and replication).

The pharmacokinetics after intravenous, intramuscular and oral administration of a 25 mg dose of leucovorin were studied in male volunteers.  After intravenous administration, serum total reduced folates (as measured by Lactobacillus casei assay) reached a mean peak of 1,259 ng/mL (range 897 to 1,625). The mean time to peak was 10 minutes.  This initial rise in total reduced folates was primarily due to the parent compound 5-formyl-THF (measured by Streptococcus faecalis assay) which rose to 1,206 ng/mL at 10 minutes.  A sharp drop in parent compound followed and coincided with the appearance of the active metabolite 5-methyl-THF which became the predominant circulating form of the drug.

The mean peak of 5-methyl-THF was 258 ng/mL and occurred at 1.3 hours.  The terminal half-life for total reduced folates was 6.2 hours.  The area under the concentration versus time curves (AUCs) for I-leucovorin, d-leucovorin and 5-methyltetrahydrofolate were 28.4 ± 3.5, 956 ± 97 and 129 ± 12 (mg/min/L ± S.E.).  When a higher dose of d,I-leucovorin (200 mg/m2) was used, similar results were obtained.  The d-isomer persisted in plasma at concentrations greatly exceeding those of the I-isomer.

After oral administration of leucovorin reconstituted with aromatic elixir, the mean peak concentration of serum total reduced folates was 393 ng/mL (range 160 to 550).  The mean time to peak was 2.3 hours and the terminal half-life was 5.7 hours. The major component was the metabolite 5-methyltetrahydrofolate to which leucovorin is primarily converted in the intestinal mucosa.  The mean peak of 5-methyl-THF was 367 ng/mL at 2.4 hours. The peak level of the parent compound was 51 ng/mL at 1.2 hours.  The AUC of total reduced folates after oral administration of the 25 mg dose was 92% of the AUC after intravenous administration.

Following oral administration, leucovorin is rapidly absorbed and expands the serum pool of reduced folates.  At a dose of 25 mg, almost 100% of the I-isomer but only 20% of the d-isomer is absorbed.  Oral absorption of leucovorin is saturable at doses above 25 mg.  The apparent bioavailability of leucovorin was 97% for 25 mg, 75% for 50 mg, and 37% for 100 mg.

In a randomized clinical study conducted by the Mayo Clinic and the North Central Cancer Treatment Group (Mayo/NCCTG) in patients with advanced metastatic colorectal cancer three treatment regimens were compared: Leucovorin (LV) 200 mg/m2 and 5-fluorouracil (5-FU) 370 mg/m2 versus LV 20 mg/m2 and 5-FU 425 mg/m2 versus 5-FU 500 mg/m2.  All drugs were administered by slow intravenous infusion daily for 5 days repeated every 28 to 35 days.  Response rates were 26% (p=0.04 versus 5-FU alone), 43% (p=0.001 versus 5-FU alone) and 10% for the high dose leucovorin, low dose leucovorin and 5-FU alone groups respectively.  Respective median survival times were 12.2 months (p=0.037), 12 months (p=0.05), and 7.7 months.  The low dose LV regimen gave a statistically significant improvement in weight gain of more than 5%, relief of symptoms, and improvement in performance status.  The high dose LV regimen gave a statistically significant improvement in performance status and trended toward improvement in weight gain and in relief of symptoms but these were not statistically significant.1

Leucovorin is improper therapy for pernicious anemia and other megaloblastic anemias secondary to the lack of vitamin B12. A hematologic remission may occur while neurologic manifestations continue to progress.

In the treatment of accidental overdosages of folic acid antagonists, intravenous leucovorin should be administered as promptly as possible.  As the time interval between antifolate administration (e.g., methotrexate) and leucovorin rescue increases, leucovorin's effectiveness in counteracting toxicity decreases.  In the treatment of accidental overdosages of intrathecally administered folic acid antagonists, do not administer leucovorin intrathecally.  LEUCOVORIN MAY BE HARMFUL OR FATAL IF GIVEN INTRATHECALLY.

Delayed methotrexate excretion may be caused by a third space fluid accumulation (i.e., ascites, pleural effusion), renal insufficiency, or inadequate hydration.  Under such circumstances, higher doses of leucovorin or prolonged administration may be indicated. Doses higher than those recommended for oral use must be given intravenously.

Seizures and/or syncope have been reported rarely in cancer patients receiving leucovorin, usually in association with fluoropyrimidine administration, and most commonly in those with CNS metastases or other predisposing factors, however, a causal relationship has not been established.5

Parenteral administration is preferable to oral dosing if there is a possibility that the patient may vomit and not absorb the leucovorin.  Leucovorin has no effect on non-hematologic toxicities of methotrexate such as the nephrotoxicity resulting from drug and/or metabolite precipitation in the kidney.

Since leucovorin enhances the toxicity of fluorouracil, leucovorin/5-fluorouracil combination therapy for advanced colorectal cancer should be administered under the supervision of a physician experienced in the use of antimetabolite cancer chemotherapy.  Particular care should be taken in the treatment of elderly or debilitated colorectal cancer patients, as these patients may be at increased risk of severe toxicity.

Patients being treated with the leucovorin/5-fluorouracil combination should have a CBC with differential and platelets prior to each treatment.  During the first two courses a CBC with differential and platelets has to be repeated weekly and thereafter once each cycle at the time of anticipated WBC nadir.  Electrolytes and liver function tests should be performed prior to each treatment for the first three cycles then prior to every other cycle.  Dosage modifications of fluorouracil should be instituted as follows, based on the most severe toxicities:

Folic acid in large amounts may counteract the antiepileptic effect of phenobarbital, phenytoin and primidone, and increase the frequency of seizures in susceptible pediatric patients.

Preliminary animal and human studies have shown that small quantities of systemically administered leucovorin enter the CSF primarily as 5-methyltetrahydrofolate and, in humans, remain 1 to 3 orders of magnitude lower than the usual methotrexate concentrations following intrathecal administration.  However, high doses of leucovorin may reduce the efficacy of intrathecally administered methotrexate.

Allergic sensitization, including anaphylactoid reactions and urticaria, has been reported following the administration of both oral and parenteral leucovorin.  No other adverse reactions have been attributed to the use of leucovorin per se.

The following table summarizes significant adverse events occurring in 316 patients treated with the leucovorin/5-fluorouracil combinations compared against 70 patients treated with 5-fluorouracil alone for advanced colorectal carcinoma.  These data are taken from the Mayo/NCCTG large multicenter prospective trial evaluating the efficacy and safety of the combination regimen.


PERCENTAGE OF PATIENTS TREATED WITH LEUCOVORIN/FLUOROURACIL FOR ADVANCED

Any = percentage of patients reporting toxicity of any severity

Excessive amounts of leucovorin may nullify the chemotherapeutic effect of folic acid antagonists.

Either of the following two regimens is recommended:

Several other doses and schedules of leucovorin/5-fluorouracil therapy have also been evaluated in patients with advanced colorectal cancer; some of these alternative regimens may also have efficacy in the treatment of this disease.  However, further clinical research will be required to confirm the safety and effectiveness of these alternative leucovorin/5-fluorouracil treatment regimens.

Serum creatinine and methotrexate levels should be determined at least once daily. Leucovorin administration, hydration, and urinary alkalization (pH of 7.0 or greater) should be continued until the methotrexate level is below 5 x 10-8 M (0.05 micromolar).  The leucovorin dose should be adjusted or leucovorin rescue extended based on the following guidelines:


GUIDELINES FOR LEUCOVORIN DOSAGE AND ADMINISTRATION

DO NOT ADMINISTER LEUCOVORIN INTRATHECALLY

Patients who experience delayed early methotrexate elimination are likely to develop reversible renal failure.  In addition to appropriate leucovorin therapy, these patients require continuing hydration and urinary alkalization, and close monitoring of fluid and electrolyte status, until the serum methotrexate level has fallen to below 0.05 micromolar and the renal failure has resolved.

Leucovorin rescue should begin as soon as possible after an inadvertent overdosage and within 24 hours of methotrexate administration when there is a delayed excretion (see WARNINGS).  Leucovorin 10 mg/m2 should be administered IM, IV, or PO every 6 hours until the serum methotrexate level is less than 10-8 M. In the presence of gastrointestinal toxicity, nausea, or vomiting, leucovorin should be administered parenterally.  Do not administer leucovorin intrathecally.

Hydration (3 L/d) and urinary alkalinization with sodium bicarbonate solution should be employed concomitantly.  The bicarbonate dose should be adjusted to maintain the urine pH at 7.0 or greater.

Up to 1 mg daily.  There is no evidence that doses greater than 1 mg/day have greater efficacy than those of 1 mg; additionally, loss of folate in urine becomes roughly logarithmic as the amount administered exceeds 1 mg.

Parenteral products should be inspected visually for particulate matter and discoloration prior to administration, whenever solution and container permit.

Leucovorin Calcium for Injection is supplied as follows:

NOVAPLUS is a registered trademark of Vizient, Inc.

For intravenous or intramuscular use. 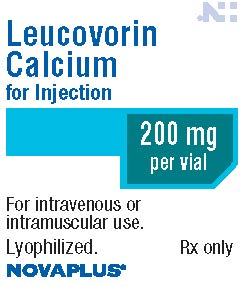 For intravenous or intramuscular use. 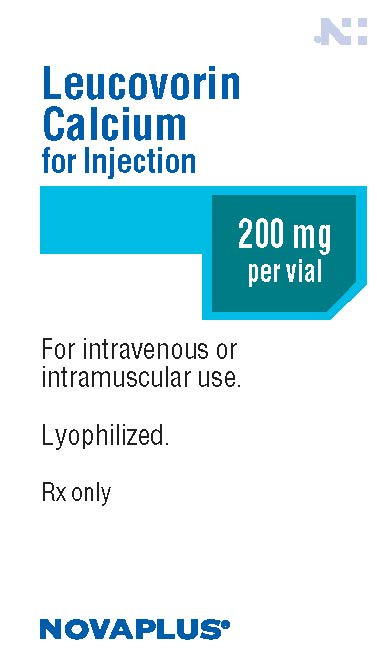