Probenecid is a uricosuric and renal tubular transport blocking agent.

The chemical name for probenecid is 4-[(dipropylamino) sulfonyl]-benzoic acid. It has the following structural formula: 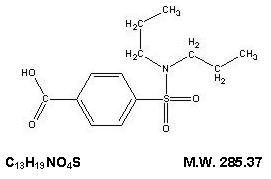 Probenecid, USP is a white or nearly white, fine, crystalline powder. Probenecid is soluble in dilute alkali, in alcohol, in chloroform, and in acetone; it is practically insoluble in water and in dilute acids.

Probenecid inhibits the tubular secretion of penicillin and usually increases penicillin plasma levels by any route the antibiotic is given. A 2-fold to 4-fold elevation has been demonstrated for various penicillins.

Probenecid decreases both hepatic and renal excretion of sulfobromophtalein (BSP). The tubular reabsorption of phosphorus is inhibited in hypoparathyroid but not in euparathyroid individuals.

Probenecid does not influence plasma concentrations of salicylates, nor the excretion of streptomycin, chloramphenicol, chlortetracycline, oxytetracycline, or neomycin.

Probenecid tablets are indicated for the treatment of the hyperuricemia associated with gout and gouty arthritis.

As an adjuvant to therapy with penicillin or with ampicillin, methicillin, oxacillin, cloxacillin, or nafcillin, for elevation and prolongation of plasma levels by whatever route the antibiotic is given.

Children under 2 years of age.

Not recommended in persons with known blood dyscrasias or uric acid kidney stones. Therapy with probenecid should not be started until an acute gouty attack has subsided.

Exacerbation of gout following therapy with probenecid may occur; in such cases colchicine or other appropriate therapy is advisable.

The appearance of hypersensitivity reactions requires cessation of therapy with probenecid.

Probenecid crosses the placental barrier and appears in cord blood. The use of any drug in women of childbearing potential requires that the anticipated benefit be weighed against the possible hazards.

Hematuria, renal colic, costovertebral pain, and formation of uric acid stones associated with the use of probenecid in gouty patients may be prevented by alkalization of the urine and a liberal fluid intake (see DOSAGE AND ADMINISTRATION). In these cases when alkali is administered, the acid-base balance of the patient should be watched.

Use with caution in patients with a history of peptic ulcer.

Probenecid has been used in patients with some renal impairment, but dosage requirements may be increased. Probenecid may not be effective in chronic renal insufficiency particularly when the glomerular filtration rate is 30 mL/minute or less. Because of its mechanism of action, probenecid is not recommended in conjunction with a penicillin in the presence of known renal impairment.

A reducing substance may appear in the urine of patients receiving probenecid. This disappears with discontinuance of therapy. Suspected glycosuria should be confirmed by using a test specific for glucose.

When probenecid is used to elevate plasma concentrations of penicillin or other beta-lactams, or when such drugs are given to patients taking probenecid therapeutically, high plasma concentrations of the other drug may increase the incidence of adverse reactions associated with that drug. In the case of penicillin or other beta-lactams, psychic disturbances have been reported.

The concomitant administration of probenecid increases the mean plasma elimination half-life of a number of drugs which can lead to increased plasma concentrations. These include agents such as indomethacin, acetaminophen, naproxen, ketoprofen, meclofenamate, lorazepam, and rifampin. Although the clinical significance of this observation has not been established, a lower dosage of the drug may be required to produce a therapeutic effect, and increases in dosage of the drug in question should be made cautiously and in small increments when probenecid is being coadministered. Although specific instances of toxicity due to this potential interaction have not been observed to date, physicians should be alert to this possibility.

Probenecid given concomitantly with sulindac had only a slight effect on plasma sulfide levels, while plasma levels of sulindac and sulfone were increased. Sulindac was shown to produce a modest reduction in the uricosuric action of probenecid, which probably is not significant under most circumstances.

In animals and in humans, probenecid has been reported to increase plasma concentrations of methotrexate (see WARNINGS).

Falsely high readings for theophylline have been reported in an in vitro study, using the Schack and Waxler technique, when therapeutic concentrations of theophylline and probenecid were added to human plasma.

The following adverse reactions have been observed and within each category are listed in order of decreasing severity.

Hematologic: aplastic anemia, leukopenia, hemolytic anemia which in some patients could be related to genetic deficiency of glucose -6- phosphate dehydrogenase in red blood cells, anemia.

Therapy with probenecid should not be started until an acute gouty attack has subsided. However, if an acute attack is precipitated during therapy, probenecid may be continued without changing the dosage, and full therapeutic dosage of colchicine, or other appropriate therapy, should be given to control the acute attack.

The recommended adult dosage is 250 mg (1/2 probenecid tablet), twice a day for one week, followed by 500 mg (1 tablet) twice a day thereafter.

Some degree of renal impairment may be present in patients with gout. A daily dosage of 1000 mg may be adequate. However, if necessary, the daily dosage may be increased by 500 mg increments every 4 weeks within tolerance (and usually not above 2000 mg per day) if symptoms of gouty arthritis are not controlled or the 24 hour uric acid excretion is not above 700 mg. As noted, probenecid may not be effective in chronic renal insufficiency particularly when the glomerular filtration rate is 30 mL/minute or less.

Gastric intolerance may be indicative of overdosage, and may be corrected by decreasing the dosage.

As uric acid tends to crystallize out of an acid urine, a liberal fluid intake is recommended, as well as sufficient sodium bicarbonate (3 to 7.5 g daily), or potassium citrate (7.5 g daily) to maintain an alkaline urine (see PRECAUTIONS).

Probenecid should be continued at the dosage that will maintain normal serum urate levels. When acute attacks have been absent for 6 months or more and serum urate levels remain within normal limits, the daily dosage may be decreased by 500 mg every 6 months. The maintenance dosage should not be reduced to the point where serum urate levels tend to rise.

Adults: The recommended dosage is 2000 mg (4 tablets of probenecid) daily in divided doses. This dosage should be reduced in older patients in whom renal impairment may be present.

For children weighing more than 50 kg (110 lb) the adult dosage is recommended.

Probenecid is contraindicated in children under 2 years of age.

The PSP excretion test may be used to determine the effectiveness of probenecid in retarding penicillin excretion and maintaining therapeutic levels. The renal clearance of PSP is reduced to about one-fifth the normal rate when dosage of probenecid is adequate.

In uncomplicated gonococcal infections in men and women (urethral, cervical, rectal), 1 g of probenecid should be given orally with 4.8 million units of aqueous procaine penicillin G2 (given IM), or 3 g of amoxicillin2(given orally), or 3.5 g of ampicillin2 (given orally).

For further guidance, see CDC recommendations for definition of regimens of choice, alternative regimens, treatment of hypersensitive patients, and other aspects of therapy. 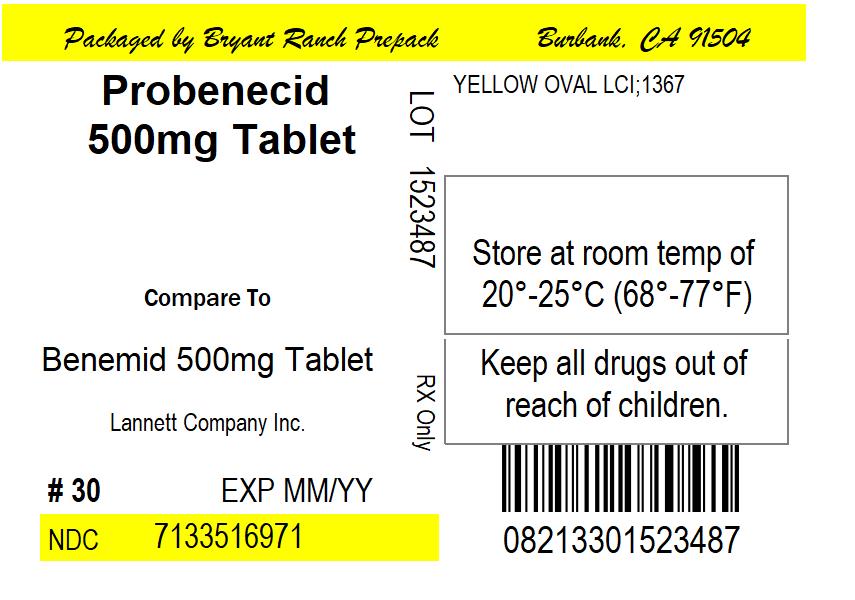