VERMOX™ CHEWABLE is indicated for the treatment of patients one year of age and older with gastrointestinal infections caused by Ascaris lumbricoides (roundworm) and Trichuris trichiura (whipworm).

The recommended dosage in patients one year of age and older is one VERMOX™ CHEWABLE 500 mg tablet taken as a single dose.

For patients who have difficulty chewing the tablet, approximately 2 mL to 3 mL of drinking water can be added to a suitably sized spoon and the VERMOX™ CHEWABLE 500 mg tablet placed into the water. Within 2 minutes, the tablet absorbs the water and turns into a soft mass with semi-solid consistency, which can then be swallowed.

VERMOX™ CHEWABLE 500 mg tablet can be taken without regard to food intake [see Clinical Pharmacology (12.3)].

Chewable Tablet: 500 mg round, flat radius-edged white to yellowish chewable tablet that is debossed with "M/500" on one side and "J" on the other side.

VERMOX™ CHEWABLE is contraindicated in persons with a known hypersensitivity to the drug or its excipients.

Convulsions have been reported in infants below the age of 1 year during post-marketing experience with mebendazole [see Adverse Reactions (6.2)].

The safety of mebendazole was evaluated in 6276 adult and pediatric subjects one year of age and older who participated in 39 clinical trials for treatment of single or mixed parasitic infections of the gastrointestinal tract. In these trials, the formulations, dosages and duration of mebendazole treatment varied. Adverse reactions reported in mebendazole-treated subjects from the 39 clinical trials are shown in Table 1 below.

The following adverse reactions have been identified in adult and pediatric patients postmarketing with mebendazole formulations and dosages other than the VERMOX™ CHEWABLE 500 mg tablet. Because these reactions are reported voluntarily from a population of uncertain size, it is not always possible to reliably estimate their frequency or establish a causal relationship to drug exposure.

Concomitant use of mebendazole and metronidazole should be avoided [see Warnings and Precautions (5.3)].

The available published literature on mebendazole use in pregnant women has not reported a clear association between mebendazole and a potential risk of major birth defects or miscarriages [see Data]. There are risks to the mother and fetus associated with untreated helminthic infection during pregnancy [see Clinical Considerations].

Several published studies, including prospective pregnancy registries, case-control, retrospective cohort, and randomized controlled studies, have reported no association between mebendazole use and a potential risk of major birth defects or miscarriage. Overall, these studies did not identify a specific pattern or frequency of major birth defects with mebendazole use. However, these studies cannot definitely establish the absence of any mebendazole-associated risk because of methodological limitations, including recall bias, confounding factors and, in some cases, small sample size or exclusion of first trimester mebendazole exposures.

Embryo-fetal developmental toxicity studies in rats revealed no adverse effects on dams or their progeny at doses up to 2.5 mg/kg/day on gestation days 6–15 (the period of organogenesis). Dosing at ≥10 mg/kg/day resulted in a lowered body weight gain and a decreased pregnancy rate. Maternal toxicity, including body weight loss in one animal and maternal death in 11 of 20 animals, was seen at 40 mg/kg/day. At 10 mg/kg/day, increased embryo-fetal resorption (100% were resorbed at 40 mg/kg/day), decreased pup weight and increased incidence of malformations (primarily skeletal) were observed. Mebendazole was also embryotoxic and teratogenic in pregnant rats at single oral doses during organogenesis as low as 10 mg/kg (approximately 0.2-fold the MRHD, based on mg/m2).

In embryo-fetal developmental toxicity studies in mice dosed on gestation days 6–15, doses of 10 mg/kg/day and higher resulted in decreased body weight gain at 10 and 40 mg/kg/day and a higher mortality rate at 40 mg/kg/day. At doses of 10 mg/kg/day (approximately 0.1-fold the MRHD, based on mg/m2) and higher, embryo-fetal resorption increased (100% at 40 mg/kg) and fetal malformations, including skeletal, cranial, and soft tissue anomalies, were present. Dosing of hamsters and rabbits did not result in embryotoxicity or teratogenicity at doses up to 40 mg/kg/day (0.6 to 1.6-fold the MRHD, based on mg/m2).

In a peri- and post-natal toxicity study in rats, mebendazole did not adversely affect dams or their progeny at 20 mg/kg/day. At 40 mg/kg (0.8-fold the MRHD, based on mg/m2), a reduction of the number of live pups was observed and there was no survival at weaning. No abnormalities were found on gross and radiographic examination of pups at birth.

The safety and effectiveness of mebendazole, including VERMOX™ CHEWABLE have not been established in pediatric patients less than one year of age. Convulsions have been reported with mebendazole use in this age group [see Warnings and Precautions (5.1) and Adverse Reactions (6.2)].

Clinical studies of mebendazole did not include sufficient numbers of subjects aged 65 and older to determine whether they respond differently from younger subjects.

The safety and effectiveness of VERMOX™ CHEWABLE 500 mg tablets have been established in adults for the treatment of gastrointestinal infections by T. trichiura and A. lumbricoides. Use of VERMOX™ CHEWABLE 500 mg tablets in adults for these indications is supported by evidence from an adequate and well-controlled trial in pediatric patients ages 1 to 16 years [see Clinical Studies (14.1)], safety data in adults [see Adverse Reactions (6.1)], pharmacokinetic data in adults [see Clinical Pharmacology (12.3)], and the evidence from published literature.

In patients treated at dosages substantially higher than recommended or for prolonged periods of time, the following adverse reactions have been reported: alopecia, reversible transaminase elevations, hepatitis, agranulocytosis, neutropenia, and glomerulonephritis.

In the event of accidental overdose, gastrointestinal signs/symptoms may occur.

VERMOX™ CHEWABLE (mebendazole chewable tablets) is an orally administered anthelmintic. Chemically, it is methyl 5-benzoylbenzimidazole-2-carbamate. Its molecular formula is C16H13N3O3. Its molecular weight is 295.30. It has the following chemical structure:

Mebendazole exhibits polymorphism. The polymorph used in VERMOX™ CHEWABLE is polymorph form C. Mebendazole is a white to almost white powder. It is practically insoluble in water, in ethanol (96%) and in methylene chloride.

Each round, flat radius-edged white to yellowish chewable tablet contains 500 mg of mebendazole and is debossed with "M/500" on one side and "J" on the other side.

Mebendazole, a benzimidazole, is an anthelmintic [see Microbiology (12.4)].

Mean plasma pharmacokinetic parameters of mebendazole in healthy adult subjects under fasted and fed conditions are summarized in Table 3.

The plasma protein binding of mebendazole is 90 to 95%. The volume of distribution is 1 to 2 L/kg, indicating that absorbed mebendazole penetrates areas outside the vascular space.

Orally administered mebendazole is extensively metabolized primarily by the liver. Plasma concentrations of its major metabolites (hydrolyzed and reduced forms of mebendazole) are higher than those of mebendazole. Impaired hepatic function, impaired metabolism, or impaired biliary elimination may lead to higher plasma levels of mebendazole.

Mebendazole, the conjugated forms of mebendazole, and its metabolites likely undergo some degree of enterohepatic recirculation. The apparent elimination half-life after an oral dose ranges from 3 to 6 hours in most patients. Less than 2% of orally administered mebendazole is excreted in urine and the remainder in the feces as unchanged drug or its metabolites.

Based on a limited number of blood samples, the pharmacokinetic results following single-dose administration of a 500 mg mebendazole chewable tablet to pediatric patients (age 1 to 16 years) with single or mixed infections of T. trichiura and/or A. lumbricoides indicated that children aged 1 to 3 years have higher systemic exposure than adults.

Mebendazole interferes with cellular tubulin formation in the helminth and causes ultrastructural degenerative changes in its intestine. As a result, its glucose uptake and the digestive and reproductive functions are disrupted, leading to immobilization, inhibition of egg production and death of the helminth.

Mebendazole is active against:

In carcinogenicity tests of mebendazole in mice and rats, no carcinogenic effects were seen at doses as high as 40 mg/kg (0.4 to 0.8-fold the MRHD, based on mg/m2) given daily over two years. No mutagenic activity was observed with mebendazole in a bacterial reverse gene mutation test. Mebendazole was mutagenic in the absence of S-9 when tested using a continuous (24 hour) treatment incubation period in the mouse lymphoma thymidine kinase assay. Mebendazole was aneugenic in vitro in mammalian somatic cells. In the in vivo mouse micronucleus assay, orally administered mebendazole induced an increased frequency of micronucleated polychromatic erythrocytes with evidence suggestive of aneugenicity. Doses up to 40 mg/kg in rats (0.8-fold the MRHD, based on mg/m2), given to males for 60 days and to females for 14 days prior to gestation, had no effect upon fetuses and offspring.

Clinical cure was defined as zero egg count (A. lumbricoides and/or T. trichiura) at the end of the double-blind period (Day 19) in patients with positive egg count for the respective worm(s) at baseline. Patients with missing stool sample at Day 19 were considered not cured (Table 4).

VERMOX™ CHEWABLE tablets are supplied as 500 mg, round, flat radius-edged white to yellowish chewable tablets that are debossed with "M/500" on one side and "J" on the other side. They are supplied as follows:

Chew tablets completely before swallowing.
Do not swallow tablets whole. 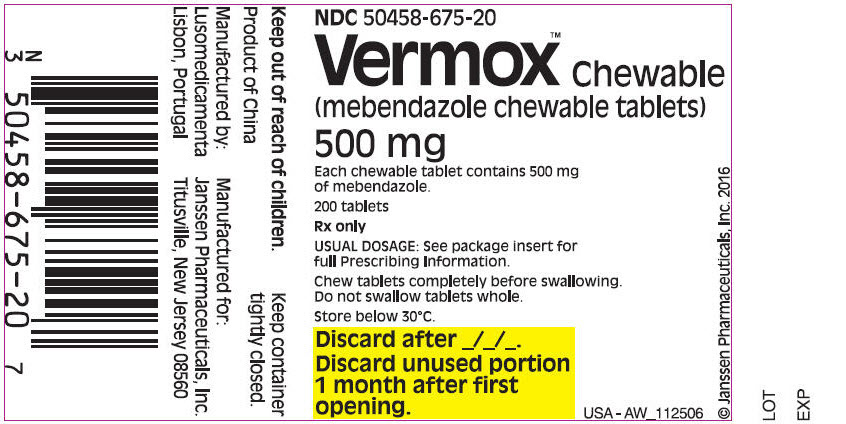