Butalbital, acetaminophen and caffeine are supplied in tablet form for oral administration.

Warning: May be habit-forming.

Butalbital (5-allyl-5-isobutylbarbituric acid), is a short to intermediate acting barbiturate. It has the following structural formula:

Acetaminophen (4'-hydroxyacetanilide), is a non-opiate, non-salicylate analgesic and antipyretic. It has the following structural formula:

The in vitro plasma protein binding of butalbital is 45% over the concentration range of 0.5 to 20 mcg/mL. This falls within the range of plasma protein binding (20% to 45%) reported with other barbiturates such as phenobarbital, pentobarbital, and secobarbital sodium. The plasma-to-blood concentration ratio was almost unity indicating that there is no preferential distribution of butalbital into either plasma or blood cells. (See OVERDOSAGE for toxicity information.)

Acetaminophen: Acetaminophen is rapidly absorbed from the gastrointestinal tract and is distributed throughout most body tissues. The plasma half-life is 1.25 to 3 hours, but may be increased by liver damage and following overdosage. Elimination of acetaminophen is principally by liver metabolism (conjugation) and subsequent renal excretion of metabolites. Approximately 85% of an oral dose appears in the urine within 24 hours of administration, most as the glucuronide conjugate, with small amounts of other conjugates and unchanged drug. (See OVERDOSAGE for toxicity information.)

Caffeine: Like most xanthines, caffeine is rapidly absorbed and distributed in all body tissues and fluids, including the CNS, fetal tissues, and breast milk.

Caffeine is cleared through metabolism and excretion in the urine. The plasma half-life is about 3 hours. Hepatic biotransformation prior to excretion, results in about equal amounts of 1-methylxanthine and 1-methyluric acid. Of the 70% of the dose that is recovered in the urine, only 3% is unchanged drug. (See OVERDOSAGE for toxicity information.)

Serious Skin Reactions: Rarely, acetaminophen may cause serious skin reactions such as acute generalized exanthematous pustulosis (AGEP), Stevens-Johnson Syndrome (SJS), and toxic epidermal necrolysis (TEN), which can be fatal. Patients should be informed about the signs of serious skin reactions, and use of the drug should be discontinued at the first appearance of skin rash or any other sign of hypersensitivity.

Hypersensitivity/anaphylaxis: There have been post-marketing reports of hypersensitivity and anaphylaxis associated with use of acetaminophen. Clinical signs included swelling of the face, mouth, and throat, respiratory distress, urticaria, rash, pruritus, and vomiting. There were infrequent reports of life-threatening anaphylaxis requiring emergency medical attention. Instruct patients to discontinue butalbital, acetaminophen and caffeine tablets immediately and seek medical care if they experience these symptoms. Do not prescribe butalbital, acetaminophen and caffeine tablets for patients with acetaminophen allergy.

Butalbital, acetaminophen and caffeine tablets should be prescribed with caution in certain special-risk patients, such as the elderly or debilitated, and those with severe impairment of renal or hepatic function, or acute abdominal conditions.

For more information on use in geriatric patients, (see PRECAUTIONS/ Geriatric Use.)

Caffeine, barbiturates and acetaminophen are excreted in breast milk in small amounts, but the significance of their effects on nursing infants is not known. Because of potential for serious adverse reactions in nursing infants from butalbital, acetaminophen and caffeine, a decision should be made whether to discontinue nursing or to discontinue the drug, taking into account the importance of the drug to the mother.

Butalbital: Barbiturates may be habit-forming: Tolerance, psychological dependence, and physical dependence may occur especially following prolonged use of high doses of barbiturates. The average daily dose for the barbiturate addict is usually about 1500 mg. As tolerance to barbiturates develops, the amount needed to maintain the same level of intoxication increases; tolerance to a fatal dosage, however, does not increase more than two-fold. As this occurs, the margin between an intoxication dosage and fatal dosage becomes smaller. The lethal dose of a barbiturate is far less if alcohol is also ingested. Major withdrawal symptoms (convulsions and delirium) may occur within 16 hours and last up to 5 days after abrupt cessation of these drugs. Intensity of withdrawal symptoms gradually declines over a period of approximately 15 days. Treatment of barbiturate dependence consists of cautious and gradual withdrawal of the drug. Barbiturate-dependent patients can be withdrawn by using a number of different withdrawal regimens. One method involves initiating treatment at the patient’s regular dosage level and gradually decreasing the daily dosage as tolerated by the patient.

In acetaminophen overdosage: dose-dependent, potentially fatal hepatic necrosis is the most serious adverse effect. Renal tubular necroses, hypoglycemic coma and coagulation defects may also occur. Early symptoms following a potentially hepatotoxic overdose may include: nausea, vomiting, diaphoresis and general malaise. Clinical and laboratory evidence of hepatic toxicity may not be apparent until 48 to 72 hours post-ingestion.

Treatment: A single or multiple drug overdose with this combination product is a potentially lethal polydrug overdose, and consultation with a regional poison control center is recommended. Immediate treatment includes support of cardiorespiratory function and measures to reduce drug absorption.

Oxygen, intravenous fluids, vasopressors, and other supportive measures should be employed as indicated. Assisted or controlled ventilation should also be considered

One or two tablets every four hours as needed. Total daily dosage should not exceed 6 tablets. 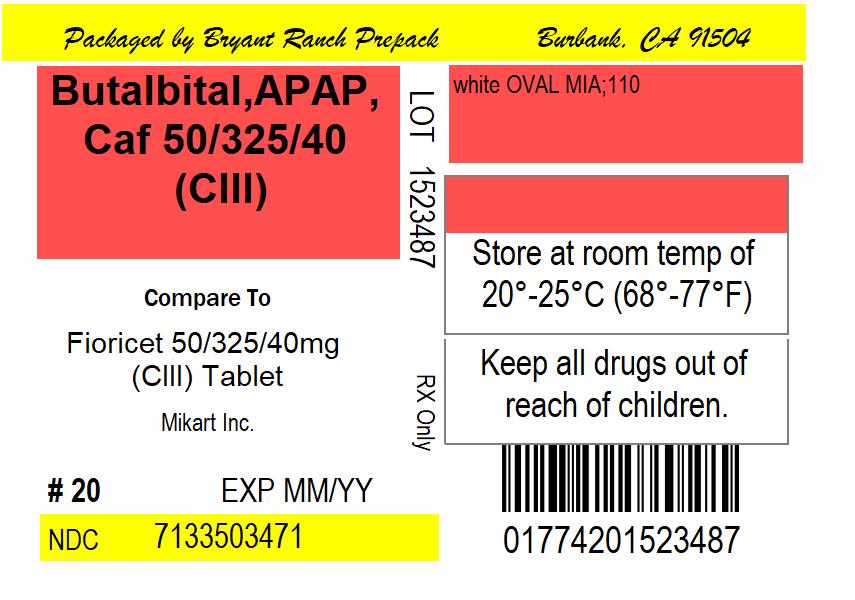