The chemical name for norethindrone is 17-Hydroxy-19-Nor-17α-pregn-4-en-20-yn-3-one. The structural formula follows: 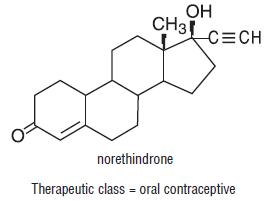 Norethindrone tablets progestin-only oral contraceptives prevent conception by suppressing ovulation in approximately half of users, thickening the cervical mucus to inhibit sperm penetration, lowering the mid-cycle LH and FSH peaks, slowing the movement of the ovum through the fallopian tubes, and altering the endometrium.

Norethindrone is rapidly absorbed with maximum plasma concentrations occurring within 1 to 2 hours after norethindrone tablet administration (see Table 1). Norethindrone appears to be completely absorbed following oral administration; however, it is subject to first pass metabolism resulting in an absolute bioavailability of approximately 65%. 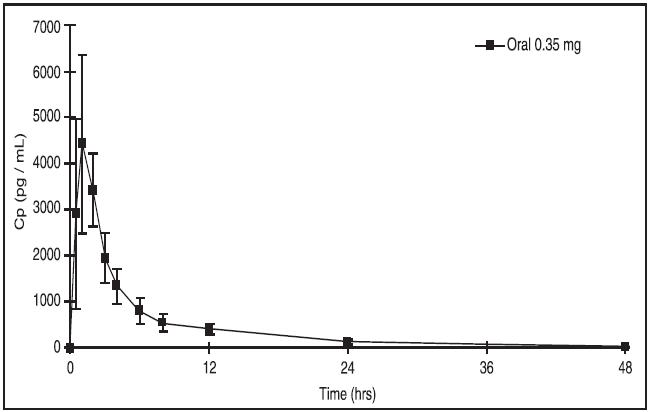 The food effect on the rate and extent of norethindrone absorption after norethindrone tablet administration has not been evaluated.

Norethindrone undergoes extensive biotransformation, primarily via reduction, followed by sulfate and glucuronide conjugation; less than 5% of a norethindrone dose is excreted unchanged; greater than 50% and 20-40% of a dose is excreted in urine and feces, respectively. The majority of metabolites in the circulation are sulfate, with glucuronides accounting for most of the urinary metabolites.

If used perfectly, the first-year failure rate for progestin-only oral contraceptives is 0.5%. However, the typical failure rate is estimated to be closer to 5%, due to late or omitted pills. The following table lists the pregnancy rates for users of all major methods of contraception.

Norethindrone tablets do not contain estrogen and, therefore, this insert does not discuss the serious health risks that have been associated with the estrogen component of combined oral contraceptives. The health care provider is referred to the prescribing information of combined oral contraceptives for a discussion of those risks, including, but not limited to, an increased risk of serious cardiovascular disease in women who smoke, carcinoma of the breast and reproductive organs, hepatic neoplasia, and changes in carbohydrate and lipid metabolism. The relationship between progestin-only oral contraceptives and these risks have not been established and there are no studies definitely linking progestin-only pill (POP) use to an increased risk of heart attack or stroke.

The physician should remain alert to the earliest manifestation of symptoms of any serious disease and discontinue oral contraceptive therapy when appropriate.

If follicular development occurs, atresia of the follicle is sometimes delayed, and the follicle may continue to grow beyond the size it would attain in a normal cycle. Generally these enlarged follicles disappear spontaneously. Often they are asymptomatic; in some cases they are associated with mild abdominal pain. Rarely they may twist or rupture, requiring surgical intervention.

4. Carcinoma of the breast and reproductive organs

Some users may experience slight deterioration in glucose tolerance, with increases in plasma insulin, but women with diabetes mellitus who use progestin-only oral contraceptives do not generally experience changes in their insulin requirements. Nonetheless, prediabetic and diabetic women in particular should be carefully monitored while taking POPs.

Lipid metabolism is occasionally affected in that HDL, HDL2, and apolipoprotein A-I and A-II may be decreased; hepatic lipase may be increased. There is no effect on total cholesterol, HDL3, LDL, or VLDL.

Change in contraceptive effectiveness associated with co-administration of other products:

Contraceptive effectiveness may be reduced when hormonal contraceptives are co-administered with antibiotics, anticonvulsants, and other drugs that increase the metabolism of contraceptive steroids. This could result in unintended pregnancy or breakthrough bleeding. Examples include rifampin, barbiturates, phenylbutazone, phenytoin, carbamazepine, felbamate, oxcarbazepine, topiramate, and griseofulvin.

Small amounts of progestin pass into the breast milk, resulting in steroid levels in infant plasma of 1-6% of the levels of maternal plasma.6 However, isolated post-market cases of decreased milk production have been reported in POPs. Very rarely, adverse effects in the infant/child have been reported, including jaundice.

If you have a headache or a worsening migraine headache with a new pattern that is recurrent, persistent, or severe, this requires discontinuation of oral contraceptives and evaluation of the cause.

Safety and efficacy of norethindrone tablets have been established in women of reproductive age. Safety and efficacy are expected to be the same for postpubertal adolescents under the age of 16 and for users 16 years and older. Use of this product before menarche is not indicated.

2. Counseling issues. The following points should be discussed with prospective users before prescribing progestin-only oral contraceptives:

To achieve maximum contraceptive effectiveness, norethindrone tablets must be taken exactly as directed. One tablet is taken every day, at the same time. Administration is continuous, with no interruption between pill packs. See PATIENT LABELING for detailed instructions.

Norethindrone Tablets USP containing 0.35 mg of norethindrone, are yellow coloured, round flat face beveled edge tablets debossed with "LU" on one side and "J22" on the other side.

Norethindrone Tablets USP are available in 28-tablet wallets. Three such wallets are packed in a carton.

They are supplied as follows:

DETAILED INFORMATION FOR THE PATIENT

This leaflet is about birth control pills that contain one hormone, a progestin. Please read this leaflet before you begin to take your pills. It is meant to be used along with talking with your doctor or clinic.

HOW EFFECTIVE ARE POPS?

Women who have never given birth: 18%

Women who have given birth: 36%

HOW DO POPS WORK?

YOU SHOULD NOT TAKE POPS

If you have sudden or severe pain in your lower abdomen or stomach area, you may have an ectopic pregnancy or an ovarian cyst. If this happens, you should contact your doctor or clinic immediately.

3. Cancer of the reproductive organs and breasts

POPs do not protect against getting or giving someone HIV (AIDS) or any other STD, such as chlamydia, gonorrhea, genital warts or herpes.

The most common side effect of POPs is a change in menstrual bleeding. Your periods may be either early or late, and you may have some spotting between periods. Taking pills late or missing pills can also result in some spotting or bleeding.

Less common side effects include headaches, tender breasts, nausea and dizziness. Weight gain, acne and extra hair on your face and body have been reported, but are rare.

If you are concerned about any of these side effects, check with your doctor or clinic.

USING POPS WITH OTHER MEDICINES

Before taking a POP, inform your health care provider of any other medication, including over-the-counter medicine, that you may be taking.

If you are taking medicines for seizures (epilepsy) or tuberculosis (TB), tell your doctor or clinic. These medicines can make POPs less effective:

Before you begin taking any new medicines be sure your doctor or clinic knows you are taking birth control pills that contain a progestin.

HOW TO TAKE POPS

IF YOU ARE LATE OR MISS TAKING YOUR POPS

If you become pregnant, or think you might be, stop taking POPs and contact your physician. Even though research has shown that POPs do not cause harm to the unborn baby, it is always best not to take any drugs or medicines that you don't need when you are pregnant.

WILL POPS AFFECT YOUR ABILITY TO GET PREGNANT LATER?

If you are breastfeeding, POPs will not affect the quality or amount of your breast milk or the health of your nursing baby. However, isolated cases of decreased milk production have been reported. If you suspect that you are not producing enough milk for your baby, contact your doctor or clinic.

WARNING: Cigarette smoking greatly increases the possibility of suffering heart attacks and strokes. Women who use oral contraceptives are strongly advised not to smoke.

Diabetic women taking POPs do not generally require changes in the amount of insulin they are taking. However, your physician may monitor you more closely under these conditions.

If you have any questions or concerns, check with your doctor or clinic. You can also ask for the more detailed "professional package labeling" written for doctors and other health care providers.

HOW TO STORE YOUR POPS

This product's label may have been updated. For current package insert and further product information, please visit www.lupinpharmaceuticals.com or call our toll-free number, 1-800-399-2561. 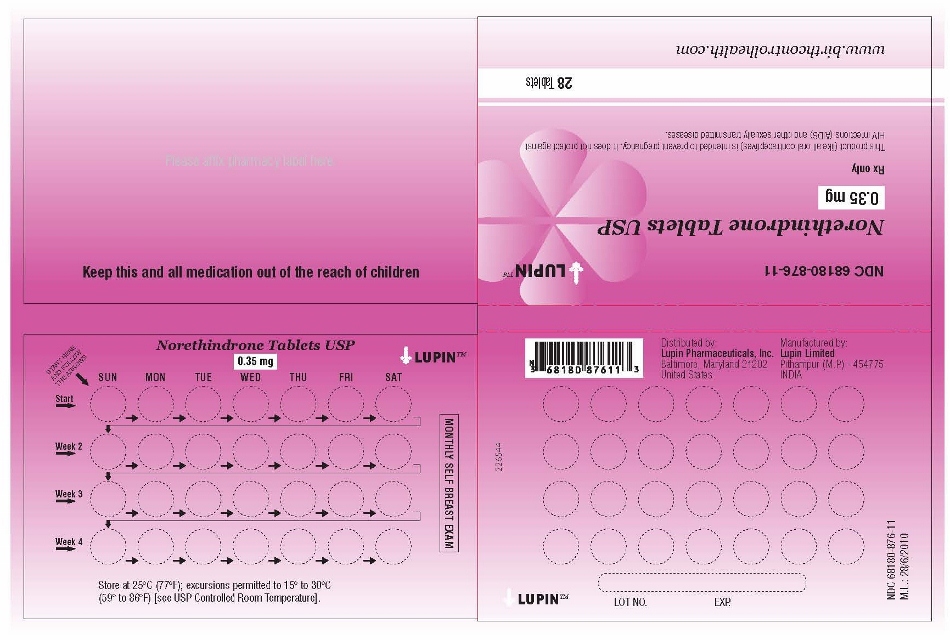 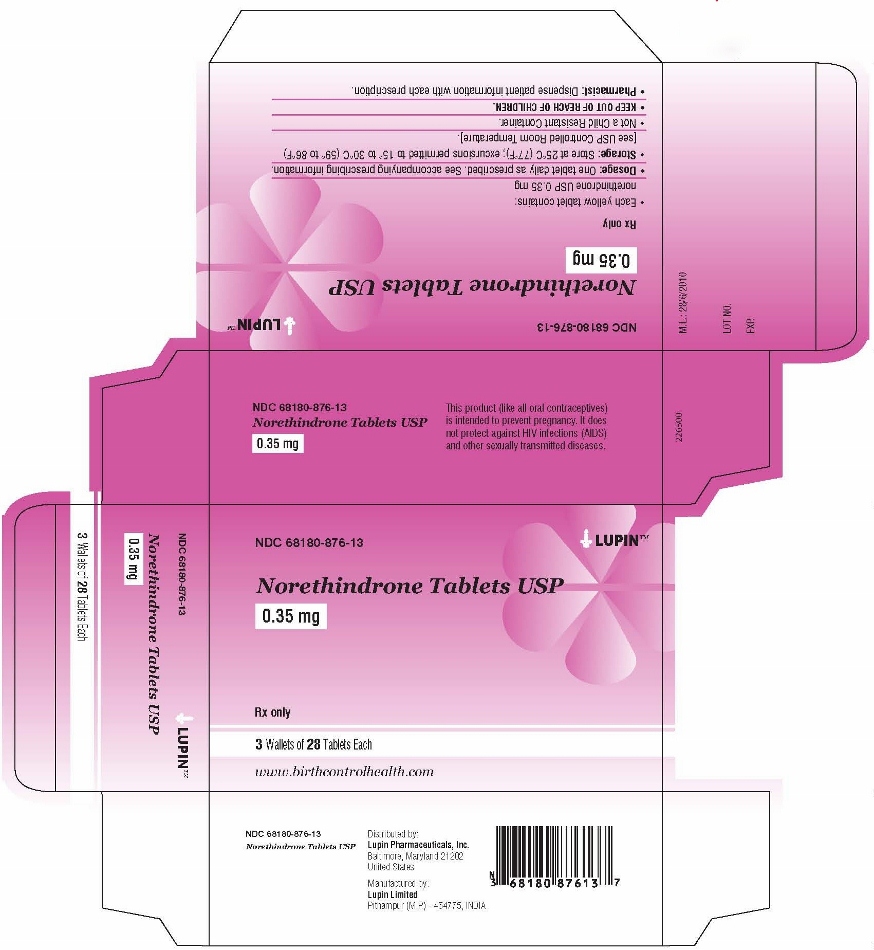