Use the diluted, refrigerated solution within 4 hours from the time of preparation or discard.

For Injection: 50 mg of decitabine as a sterile, white to almost white lyophilized powder in a single-dose vial for reconstitution.

Because clinical trials are conducted under widely varying conditions, adverse reaction rates observed in the clinical trials of a drug cannot be directly compared to rates in the clinical trials of another drug and may not reflect the rates observed in practice.
The safety of decitabine was studied in 3 single-arm studies (N = 66, N = 98, N = 99) and 1 controlled supportive care study (N = 83 decitabine, N = 81 supportive care). The data described below reflect exposure to decitabine in 83 patients in the MDS trial. In the trial, patients received 15 mg/m2 intravenously every 8 hours for 3 days every 6 weeks. The median number of decitabine cycles was 3 (range 0 to 9).
Most Common Adverse Reactions: neutropenia, thrombocytopenia, anemia, fatigue, pyrexia, nausea, cough, petechiae, constipation, diarrhea, and hyperglycemia.
Adverse Reactions Most Frequently (≥1%) Resulting in Clinical Intervention and or Dose Modification in the Controlled Supportive Care Study in the Decitabine Arm :

Table 1 presents all adverse reactions occurring in at least 5% of patients in the decitabine group and at a rate greater than supportive care.

In a single-arm MDS study (N=99), decitabine was dosed at 20 mg/m2 intravenously, infused over one hour daily, for 5 consecutive days of a 4-week cycle. Table 2 presents all adverse reactions occurring in at least 5% of patients.

No overall difference in safety was detected between patients > 65 years of age and younger patients in these MDS trials. No significant differences in safety were detected between males and females. Patients with renal or hepatic dysfunction were not studied. Insufficient numbers of non-White patients were available to draw conclusions in these clinical trials.
Serious adverse reactions that occurred in patients receiving decitabine not previously reported in Tables 1 and 2 include:

The following adverse reactions have been identified during postapproval use of decitabine. Because these reactions are reported voluntarily from a population of uncertain size, it is not always possible to reliably estimate their frequency or establish a causal relationship to drug exposure.

Risk Summary
Based on findings from human data, animal studies, and the mechanism of action, decitabine can cause fetal harm when administered to a pregnant woman [ see Clinical Pharmacology (12.1) and Nonclinical Toxicology (13.1)]. Limited published data on decitabine use throughout the first trimester during pregnancy describe adverse developmental outcomes including major birth defects (structural abnormalities). In animal reproduction studies, administration of decitabine to pregnant mice and rats during organogenesis caused adverse developmental outcomes including malformations and embryo-fetal lethality starting at doses approximately 7% of the recommended human dose on a mg/m2 basis (see Data). Advise pregnant women of the potential risk to a fetus.
The estimated background risk of major birth defects and miscarriage for the indicated population is unknown. All pregnancies have a background risk of birth defect, loss, or other adverse outcomes. The estimated background risk of major birth defects and miscarriage in the U.S. general population is 2% to 4% and 15% to 20% of clinically recognized pregnancies, respectively.
Data
Human Data
A single published case report of decitabine pregnancy exposure in a 39-year old woman with a hematologic malignancy described multiple structural abnormalities after 6 cycles of therapy in the 18th week of gestation. These abnormalities included holoprosencephaly, absence of nasal bone, mid-facial deformity, cleft lip and palate, polydactyly and rocker-bottom feet. The pregnancy was terminated.
Animal Data
In utero exposure to decitabine causes temporal related defects in the rat and/or mouse, which include growth suppression, exencephaly, defective skull bones, rib/sternabrae defects, phocomelia, digit defects, micrognathia, gastroschisis, micromelia. Decitabine inhibits proliferation and increases apoptosis of neural progenitor cells of the fetal CNS and induces palatal clefting in the developing murine fetus. Studies in mice have also shown that decitabine administration during osteoblastogenesis (day 10 of gestation) induces bone loss in offspring.
In mice exposed to single IP (intraperitoneal) injections (0, 0.9 and 3.0 mg/m2, approximately 2% and 7% of the recommended daily clinical dose, respectively) over gestation days 8, 9, 10 or 11, no maternal toxicity was observed but reduced fetal survival was observed after treatment at 3 mg/m2 and decreased fetal weight was observed at both dose levels. The 3 mg/m2 dose elicited characteristic fetal defects for each treatment day, including supernumerary ribs (both dose levels), fused vertebrae and ribs, cleft palate, vertebral defects, hind-limb defects and digital defects of fore- and hind-limbs.
In rats given a single IP injection of 2.4, 3.6 or 6 mg/m2 (approximately 5%, 8%, or 13% the daily recommended clinical dose, respectively) on gestation days 9-12, no maternal toxicity was observed. No live fetuses were seen at any dose when decitabine was injected on gestation day 9. A significant decrease in fetal survival and reduced fetal weight at doses greater than 3.6 mg/m2 was seen when decitabine was given on gestation day 10. Increased incidences of vertebral and rib anomalies were seen at all dose levels, and induction of exophthalmia, exencephaly, and cleft palate were observed at 6.0 mg/m2. Increased incidence of foredigit defects was seen in fetuses at doses greater than 3.6 mg/m2. Reduced size and ossification of long bones of the fore-limb and hind-limb were noted at 6.0 mg/m2.
The effect of decitabine on postnatal development and reproductive capacity was evaluated in mice administered a single 3 mg/m2 IP injection (approximately 7% the recommended daily clinical dose) on day 10 of gestation. Body weights of males and females exposed in utero to decitabine were significantly reduced relative to controls at all postnatal time points. No consistent effect on fertility was seen when female mice exposed in utero were mated to untreated males. Untreated females mated to males exposed in utero showed decreased fertility at 3 and 5 months of age (36% and 0% pregnancy rate, respectively). Follow up studies indicated that treatment of pregnant mice with decitabine on gestation day 10 was associated with a reduced pregnancy rate resulting from effects on sperm production in the F1-generation.

Pregnancy Testing
Conduct pregnancy testing of females of reproductive potential prior to initiating decitabine.
Contraception
Females
Decitabine can cause fetal harm when administered to pregnant women [see Use in Specific Populations (8.1)]. Advise females of reproductive potential to use effective contraception while receiving decitabine and for 6 months following the last dose.

Advise males with female partners of reproductive potential to use effective contraception while receiving treatment with decitabine and for 3 months following the last dose [see Nonclinical Toxicology (13.1)].
Infertility
Based on findings of decitabine in animals, male fertility may be compromised by treatment with decitabine. The reversibility of the effect on fertility is unknown [see Nonclinical Toxicology (13.1)].

The safety and effectiveness of decitabine in pediatric patients have not been established.

Of the total number of patients exposed to decitabine in the controlled clinical trial, 61 of 83 patients were age 65 years and over, while 21 of 83 patients were age 75 years and over. No overall differences in safety or effectiveness were observed between these subjects and younger subjects, and other reported clinical experience has not identified differences in responses between the elderly and younger patients, but greater sensitivity of some older individuals cannot be ruled out.

There is no known antidote for overdosage with decitabine. Higher doses are associated with increased myelosuppression including prolonged neutropenia and thrombocytopenia. Standard supportive measures should be taken in the event of an overdose.

Decitabine is a nucleoside metabolic inhibitor. Decitabine is a fine, white to almost white powder with the molecular formula of C8H12N4O4 and a molecular weight of 228.21. Its chemical name is 4-amino-1-(2-deoxy-β-D-erythro­-pentofuranosyl)-1,3,5-triazin-2(1H)-one and it has the following structural formula: 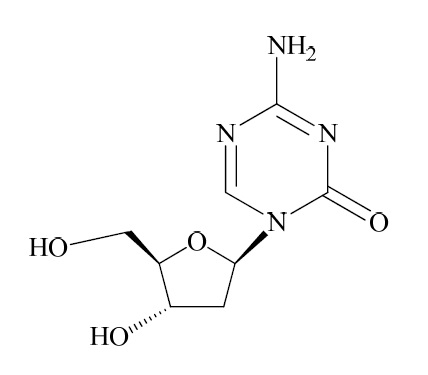 Decitabine is soluble in dimethyl sulfoxide; sparingly soluble in water; slightly soluble in ethanol and water (50:50), in methanol and water (50:50), and in methanol.
Decitabine for injection, for intravenous use, is a sterile, white to almost white lyophilized cake or powder supplied in a clear colorless glass single-dose vial. Each 20 mL vial contains 50 mg decitabine, 68 mg monobasic potassium phosphate (potassium dihydrogen phosphate) and 11.6 mg sodium hydroxide. Sodium hydroxide is used for pH adjustment.


Decitabine is believed to exert its antineoplastic effects after phosphorylation and direct incorporation into DNA and inhibition of DNA methyltransferase, causing hypomethylation of DNA and cellular differentiation or apoptosis. Decitabine inhibits DNA methylation in vitro, which is achieved at concentrations that do not cause major suppression of DNA synthesis. Decitabine-induced hypomethylation in neoplastic cells may restore normal function to genes that are critical for the control of cellular differentiation and proliferation. In rapidly dividing cells, the cytotoxicity of decitabine may also be attributed to the formation of covalent adducts between DNA methyltransferase and decitabine incorporated into DNA. Non-proliferating cells are relatively insensitive to decitabine

Decitabine has been shown to induce hypomethylation both in vitro and in vivo. However, there have been no studies of decitabine-induced hypomethylation and pharmacokinetic parameters.


Carcinogenicity studies with decitabine have not been conducted.
The mutagenic potential of decitabine was tested in several in vitro and invivo systems. Decitabine increased mutation frequency in L5178Y mouse lymphoma cells, and mutations were produced in an Escherichia coli lac-I transgene in colonic DNA of decitabine-treated mice. Decitabine caused chromosomal rearrangements in larvae of fruit flies.
In male mice given IP injections of 0.15, 0.3 or 0.45 mg/m2 decitabine (approximately 0.3% to 1% the recommended clinical dose) 3 times a week  for 7 weeks, decitabine did not affect survival, body weight gain or hematological measures (hemoglobin and white blood cell counts). Testes weights were reduced, abnormal histology was observed and significant decreases in sperm number were found at doses ≥ 0.3 mg/m2. In females mated to males dosed with ≥ 0.3 mg/m2 decitabine, pregnancy rate was reduced and preimplantation loss was significantly increased.


A randomized open-label, multicenter, controlled trial evaluated 170 adult patients with myelodysplastic syndromes (MDS) meeting French-American-British (FAB) classification criteria and International Prognostic Scoring System (IPSS) High-Risk, Intermediate-2 and Intermediate-1 prognostic scores. Eighty-nine patients were randomized to decitabine therapy plus supportive care (only 83 received decitabine), and 81 to Supportive Care (SC) alone. Patients with Acute Myeloid Leukemia (AML) were not intended to be included. Of the 170 patients included in the study, independent review (adjudicated diagnosis) found that 12 patients (9 in the decitabine arm and 3 in the SC arm) had the diagnosis of AML at baseline. Baseline demographics and other patient characteristics in the Intent-to-Treat (ITT) population were similar between the 2 groups, as shown in Table 4.
Table 4 Baseline Demographics and Other Patient Characteristics (ITT)

Patients randomized to the decitabine arm received decitabine intravenously infused at a dose of 15 mg/m2 over a 3-hour period, every 8 hours, for 3 consecutive days. This cycle was repeated every 6 weeks, depending on the patient’s clinical response and toxicity. Supportive care consisted of blood and blood product transfusions, prophylactic antibiotics, and hematopoietic growth factors. The study endpoints were overall response rate (complete response + partial response) and time to AML or death. Responses were classified using the MDS International Working Group (IWG) criteria; patients were required to be RBC and platelet transfusion independent during the time of response.  Response criteria are given in Table 5.


Table 5 Response Criteria for the Controlled Trial in MDS*

All patients with a CR or PR were RBC and platelet transfusion independent in the absence of growth factors.
Responses occurred in patients with an adjudicated baseline diagnosis of AML.

Three open-label, single-arm, multicenter studies were conducted to evaluate the safety and efficacy of decitabine in MDS patients with any of the FAB subtypes. In one study conducted in North America, 99 patients with IPSS Intermediate-1, Intermediate-2, or high-risk prognostic scores received decitabine 20 mg/m2  as an intravenous infusion over 1-hour daily, on days 1-5 of week 1, every 4 weeks (1 cycle). The results were consistent with the results of the controlled trial and are summarized in Table 8.
Table 7 Baseline Demographics and Other Patient Characteristics (ITT)

Decitabine for injection is a sterile, white to almost white Lyophilized cake or powder for intravenous use supplied as:
NDC 72205-036-01, 50 mg single-dose vial individually packaged in a carton. 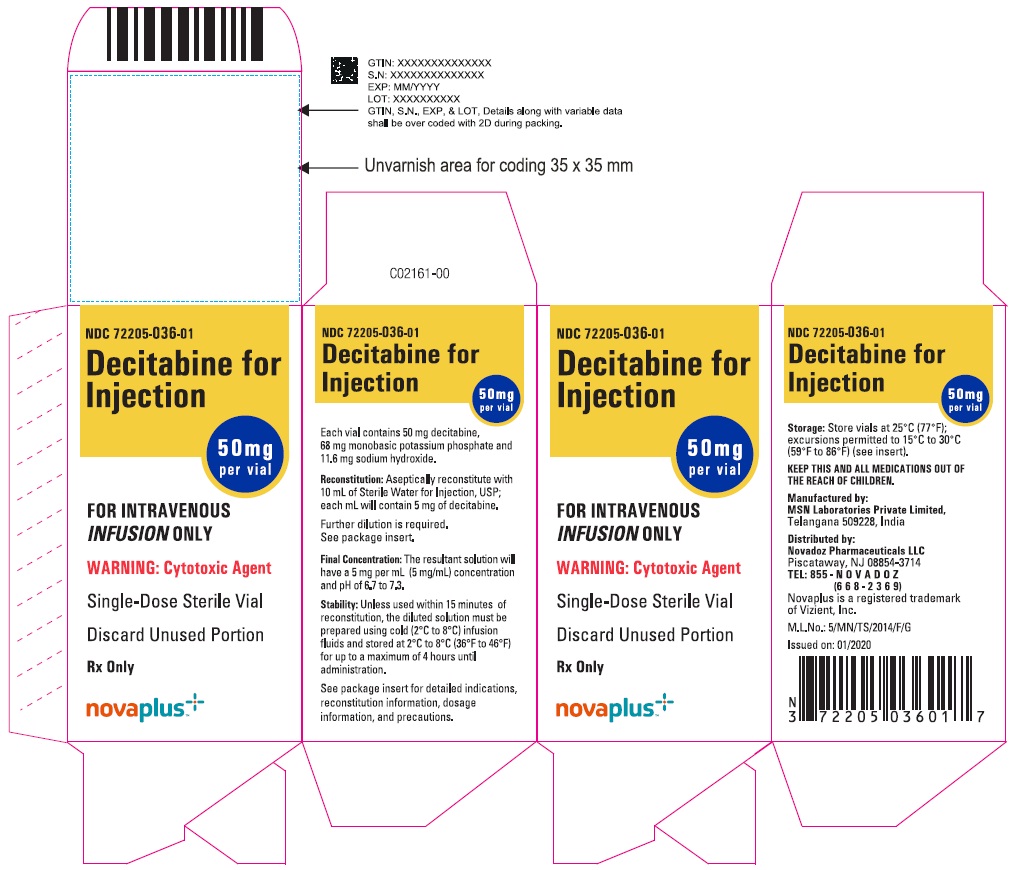