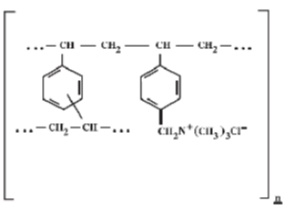 
Cholestyramine resin adsorbs and combines with the bile acids in the intestine to form an insoluble complex which is excreted in the feces. This results in a partial removal of bile acids from the enterohepatic circulation by preventing their absorption.


In patients with partial biliary obstruction, the reduction of serum bile acid levels by cholestyramine resin reduces excess bile acids deposited in the dermal tissue with resultant decrease in pruritus.

In a large, placebo-controlled, multi-clinic study, LRC-CPPT1, hypercholesterolemic subjects treated with cholestyramine resin had mean reduction in total and low-density lipoprotein cholesterol (LDL-C) which exceeded those for diet and placebo treatment by 7.2% and 10.4%, respectively. Over the seven-year study period the cholestyramine resin group experienced a 19% reduction (relative to the incidence in the placebo group) in the combined rate of coronary heart disease death plus non-fatal myocardial infarction (cumulative incidence of 7% cholestyramine resin and 8.6% placebo). The subjects included in the study were men aged 35 to 59 with serum cholesterol levels above 265 mg/dL and no previous history of heart disease. It is not clear to what extent these findings can be extrapolated to females and other segments of the hypercholesterolemic population (see also PRECAUTIONS, Carcinogenesis, Mutagenesis, Impairment of Fertility).


The effect of intensive lipid-lowering therapy on coronary atherosclerosis has been assessed by arteriography in hyperlipidemic patients. In these randomized, controlled clinical trials, patients were treated for two to four years by either conventional measures (diet, placebo or in some cases low dose resin) or intensive combination therapy using diet plus colestipol (an anion exchange resin with a mechanism of action and an effect on serum lipids similar to that of cholestyramine resin) plus either nicotinic acid or lovastatin. When compared to conventional measures, intensive lipid-lowering combination therapy significantly reduced the frequency of progression and increased the frequency of regression of coronary atherosclerotic lesions in patients with or at risk for coronary artery disease.

1) Cholestyramine for oral suspension, USP is indicated as adjunctive therapy to diet for the reduction of elevated serum cholesterol in patients with primary hypercholesterolemia (elevated low density lipoprotein [LDL] cholesterol) who do not respond adequately to diet. Cholestyramine for oral suspension, USP may be useful to lower LDL cholesterol in patients who also have hypertriglyceridemia, but it is not indicated where hypertriglyceridemia is the abnormality of most concern.


Therapy with lipid-altering agents should be a component of multiple risk factor intervention in those individuals at significantly increased risk for atherosclerotic vascular disease due to hypercholesterolemia. Treatment should begin and continue with dietary therapy specific for the type of hyperlipoproteinemia determined prior to initiation of drug therapy. Excess body weight may be an important factor and caloric restriction for weight normalization should be addressed prior to drug therapy in the overweight.


For TG levels > 400 mg/dL, this equation is less accurate and LDL-C concentrations should be determined by ultracentrifugation. In hypertriglyceridemic patients, LDL-C may be low or normal despite elevated Total-C. In such cases cholestyramine resin may not be indicated.


Since the goal of treatment is to lower LDL-C, the NCEP4 recommends that LDL-C levels be used to initiate and assess treatment response. If LDL-C levels are not available then Total-C alone may be used to monitor long-term therapy. A lipoprotein analysis (including LDL-C determination) should be carried out once a year. The NCEP treatment guidelines are summarized below.


Cholestyramine resin monotherapy has been demonstrated to retard the rate of progression2,3 and increase the rate of regression3 of coronary atherosclerosis.


2) Cholestyramine for oral suspension, USP is indicated for the relief of pruritus associated with partial biliary obstruction. Cholestyramine resin has been shown to have a variable effect on serum cholesterol in these patients. Patients with primary biliary cirrhosis may exhibit an elevated cholesterol as part of their disease.

Cholestyramine for oral suspension, USP is contraindicated in patients with complete biliary obstruction where bile is not secreted into the intestine and in those individuals who have shown hypersensitivity to any of its components.


There is a possibility that prolonged use of cholestyramine resin, since it is a chloride form of anion exchange resin, may produce hyperchloremic acidosis. This would especially be true in younger and smaller patients where the relative dosage may be higher. Caution should also be exercised in patients with renal insufficiency or volume depletion and in patients receiving concomitant spironolactone.


Cholestyramine resin may produce or worsen preexisting constipation. The dosage should be increased gradually in patients to minimize the risk of developing fecal impaction. In patients with preexisting constipation, the starting dose should be 1 sachet or 1 scoop once daily for 5 days to 7 days, increasing to twice daily with monitoring of constipation and of serum lipoproteins, at least twice, 4 weeks to 6 weeks apart. Increased fluid intake and fiber intake should be encouraged to alleviate constipation and a stool softener may occasionally be indicated. If the initial dose is well tolerated, the dose may be increased as needed by one dose/day (at monthly intervals) with periodic monitoring of serum lipoproteins. If constipation worsens or the desired therapeutic response is not achieved at one dose/day to six doses/day, combination therapy or alternate therapy should be considered. Particular effort should be made to avoid constipation in patients with symptomatic coronary artery disease. Constipation associated with cholestyramine resin may aggravate hemorrhoids.

Inform your physician if you are pregnant or plan to become pregnant or are breast-feeding. Drink plenty of fluids and mix each 9 gram dose of cholestyramine for oral suspension in at least 2 ounces to 6 ounces of fluid before taking. Sipping or holding the resin suspension in the mouth for prolonged periods may lead to changes in the surface of the teeth resulting in discoloration, erosion of enamel or decay, good oral hygiene should be maintained.


The relevance of this laboratory observation from studies in rats to the clinical use of cholestyramine resin is not known. In the LRC-CPPT study referred to above, the total incidence of fatal and nonfatal neoplasms was similar in both treatment groups. When the many different categories of tumors are examined, various alimentary system cancers were somewhat more prevalent in the cholestyramine group. The small numbers and the multiple categories prevent conclusions from being drawn. However, in view of the fact that cholestyramine resin is confined to the GI tract and not absorbed and in light of the animal experiments referred to above, a six-year post-trial follow-up of the LRC-CPPT5 patient population has been completed (a total of 13.4 years of in-trial plus post-trial follow-up) and revealed no significant difference in the incidence of cause-specific mortality or cancer morbidity between cholestyramine and placebo treated patients.

Although an optimal dosage schedule has not been established, standard texts (6, 7) list a usual pediatric dose of 240 mg/kg/day of anhydrous cholestyramine resin in two to three divided doses, normally not to exceed 8 g/day with dose titration based on response and tolerance.


The effects of long-term drug administration, as well as its effect in maintaining lowered cholesterol levels in pediatric patients, are unknown. Also see ADVERSE REACTIONS.


Occasional calcified material has been observed in the biliary tree, including calcification of the gallbladder, in patients to whom cholestyramine resin has been given. However, this may be a manifestation of the liver disease and not drug related.


One patient experienced biliary colic on each of three occasions on which he took a cholestyramine for oral suspension product. One patient diagnosed as acute abdominal symptom complex was found to have a “pasty mass” in the transverse colon on x-ray.


Other events (not necessarily drug related) reported in patients taking cholestyramine resin include:


Cholestyramine for oral suspension, USP should not be taken in its dry form. Always mix the dry powder with water or other fluids before ingesting. See Preparation Instructions.

Preliminary evidence suggests that the lipid-lowering effects of cholestyramine on total and LDL-cholesterol are enhanced when combined with a HMG-CoA reductase inhibitor, e.g., pravastatin, lovastatin, simvastatin and fluvastatin. Additive effects on LDL-cholesterol are also seen with combined nicotinic acid/cholestyramine therapy. See PRECAUTIONS, Drug Interactions for recommendations on administering concomitant therapy.

The color of cholestyramine for oral suspension, USP may vary somewhat from batch to batch but this variation does not affect the performance of the product. Place the contents of one single-dose sachet or one level scoopful of cholestyramine for oral suspension, USP in a glass or cup. Add at least 2 ounces to 6 ounces of water or the non-carbonated beverage of your choice. Stir to a uniform consistency.


Cholestyramine for oral suspension, USP may also be mixed with highly fluid soups or pulpy fruits with a high moisture content such as applesauce or crushed pineapple.