Federal (USA) law restricts this drug to use by or on the order of a licensed veterinarian.

This preparation is especially beneficial in relieving pruritus
and inflammation of allergic dermatitis, acute moist dermatitis, dry eczema, urticaria,
bronchial asthma, pollen sensitivities and otitis externa in dogs; allergic dermatitis and
moist and dry eczema in cats. Onset of relief may begin within a few hours to a few
days following injection and may persist for a few days to six weeks. Symptoms may
be expected to recur if the cause of the allergic reaction is still present, in which case
retreatment may be indicated. In treating acute hypersensitivity reactions, such as
anaphylactic shock, intravenous SOLU-DELTA-CORTEF® Sterile Powder containing
prednisolone sodium succinate, as well as other appropriate treatments, should be
used.

In dogs and cats moribund from
overwhelmingly severe infections for which antibacterial therapy is available (eg,
critical pneumonia, pyometritis), DEPO-MEDROL may be lifesaving, acting to inhibit
the inflammatory reaction, which itself may be lethal; preventing vascular collapse
and preserving the integrity of the blood vessels; modifying the patient’s reaction to
drugs; and preventing or reducing the exudative reaction which often complicates
certain infections. As supportive therapy, it improves the general attitude of the animal
being treated. All necessary procedures for the establishment of a bacterial diagnosis
should be carried out whenever possible before institution of therapy. Corticosteroid
therapy in the presence of infection should be administered for the shortest possible
time compatible with maintenance of an adequate response, and antibacterial therapy
should be continued for at least three days after the hormone has been withdrawn.
Combined hormone and antibacterial therapy does not obviate the need for indicated
surgical treatment.

In certain conditions where it is desired to reduce inflammation,
vascularization, fibroblastic infiltration, and scar tissue, the use of DEPO-MEDROL
should be considered. Snakebite of dogs also is an indication for the use of this
suspension because of its anti-toxemic, anti-shock, and anti-inflammatory activity. It
is particularly effective in reducing swelling and preventing sloughing. Its employment
in the treatment of such conditions is recommended as a supportive measure to
standard procedures and time-honored treatments and will give comfort to the animal
and hasten complete recovery.

Systemic therapy with methylprednisolone acetate, as with other corticoids, is
contraindicated in animals with arrested tuberculosis, peptic ulcer, and Cushing’s
syndrome. The presence of active tuberculosis, diabetes mellitus, osteoporosis, renal
insufficiency, predisposition to thrombophlebitis, hypertension, or congestive heart
failure necessitates carefully controlled use of corticosteroids. Intrasynovial,
intratendinous, or other injections of corticosteroids for local effect are contraindicated
in the presence of acute infectious conditions. Exacerbation of pain, further loss of
joint motion, with fever and malaise following injection may indicate that the condition
has become septic. Appropriate antibacterial therapy should be instituted immediately.

Clinical and experimental data have demonstrated that corticosteroids administered
orally or parenterally to animals may induce the first stage of parturition when administered
during the last trimester of pregnancy and may precipitate premature
parturition followed by dystocia, fetal death, retained placenta and metritis.

Not for human use. Do not use in horses intended for human consumption.

DEPO-MEDROL exerts an inhibitory influence on the mechanisms and the tissue
changes associated with inflammation. Vascular permeability is decreased, exudation
diminished, and migration of the inflammatory cells markedly
inhibited. In addition, systemic manifestations such as fever and signs of toxemia may also be suppressed.
While certain aspects of this alteration of the inflammatory reaction may be beneficial,
the suppression of inflammation may mask the signs of infection and tend to facilitate
spread of microorganisms. Hence, all patients receiving this drug should be watched
for evidence of intercurrent infection. Should infection occur, it must be brought under
control by the use of appropriate antibacterial measures, or administration of this preparation
should be discontinued. However, in infections characterized by
overwhelming toxicity, methylprednisolone acetate therapy in conjunction with
appropriate antibacterial therapy is effective in reducing mortality and morbidity.
Without conjoint use of an antibiotic to which the invader-organism is sensitive,
injudicious use of the adrenal hormones in animals with infections can be hazardous.
As with other corticoids, continued or prolonged use is discouraged.

While no sodium retention or potassium depletion has been observed at the doses
recommended, animals receiving methylprednisolone acetate, as with all corticoids,
should be under close observation for possible untoward effects. If symptoms of
hypopotassemia (hypokalemia) should occur, corticoid therapy should be discontinued
and potassium chloride administered by continuous intravenous drip.

Since this drug lacks significant mineralocorticoid activity in usual therapeutic
doses, it is not likely to afford adequate support in states of acute adrenocortical
insufficiency. For treatment of the latter, the parent adrenocortical steroids,
hydrocortisone or cortisone, should be used.

Following intramuscular injection of methylprednisolone acetate, a prolonged systemic effect results. The dose varies with the size of the animal patient, the severity of the condition under treatment, and the animal’s response to therapy.

The average intramuscular dose for dogs is 20 mg. In accordance with the size of the dog and severity of the condition under treatment, the dose may range from 2 mg in miniature breeds to 40 mg in medium breeds, and even as high as 120 mg in extremely large breeds or dogs with severe involvement.

The average intramuscular dose for cats is 10 mg with a range up to 20 mg.

Injections may be made at weekly intervals or in accordance with the severity of the condition and clinical response.

The usual intramuscular dose for horses is 200 mg repeated as necessary.

For maintenance therapy in chronic conditions, initial doses should be reduced gradually until the smallest effective (ie, individualized) dose is established. MEDROL® Tablets containing methylprednisolone may also be used for maintenance in dogs and cats, administered according to the recommended dose.

When treatment is to be withdrawn after prolonged and intensive therapy, the dose should be reduced gradually.

If signs of stress are associated with the condition being treated, the dose should be increased. If a rapid hormonal effect of maximum intensity is required, as in anaphylactic shock, the intravenous administration of highly soluble SOLU-DELTA-CORTEF® Sterile Powder containing prednisolone sodium succinate is indicated.

Methylprednisolone acetate, a slightly soluble ester of methylprednisolone, is capable of producing a more prolonged local anti-inflammatory effect than equimolar doses of hydrocortisone acetate. Following intrasynovial injection, relief from pain may be experienced within 12 to 24 hours. The duration of relief varies, but averages three to four weeks, with a range of one to five or more weeks. Injections of methylprednisolone acetate have been well tolerated. Intrasynovial (intra-articular) injections may occasionally result in an increased localized inflammatory response.

The action of DEPO-MEDROL injected intrasynovially appears to be well localized since significant metabolic effects characteristic of systemic administration of adrenal steroids have not been observed. In a few instances mild and transient improvement of structures other than those injected have been reported. No other systemic effects have been noted. However, it is possible that mild systemic effects may occur following intrasynovial administration, and this possibility is greater the larger the number of structures injected and the higher the total dose employed.

The anatomy of the area to be injected should be reviewed in order to assure that the suspension is properly placed and to determine that large blood vessels or nerves are avoided. The injection site is located where the synovial cavity is most superficial. The area is prepared for aseptic injection of the medicament by the removal of hair and cleansing of the skin with alcohol or Mercresin® tincture. A sterile 18- to 21-gauge needle for horses, 20- to 22-gauge needle for dogs, on a dry syringe is quickly inserted into the synovial space and a small amount of synovial fluid withdrawn. If there is an excess of synovia and more than 1 mL of suspension is to be injected, it is well to aspirate a volume of fluid comparable to that which is to be injected. With the needle in place, the aspirating syringe is removed and replaced by a second syringe containing the proper amount of suspension which is then injected. In some animals a transient pain is elicited immediately upon injection into the affected cavity. This pain varies from mild to severe and may last for a few minutes up to 12 hours. After injection, the structure may be moved gently a few times to aid mixing of the synovial fluid and the suspension. The site may be covered with a small sterile dressing.

Areas not suitable for injection are those that are anatomically inaccessible such as spinal joints and those like the sacroiliac joints, which are devoid of synovial space. Treatment failures are most frequently the result of failure to enter the synovial space. If failures occur when injections into the synovial spaces are certain, as determined by aspiration of fluid, repeated injections are usually futile. Local therapy does not alter the underlying disease process, and whenever possible comprehensive therapy including physiotherapy and orthopedic correction should be employed.

The average initial dose for a large synovial space in horses is 120 mg with a range from 40 to 240 mg. Smaller spaces will require a correspondingly lesser dose.

The average initial dose for a large synovial space in dogs is 20 mg. Smaller spaces will require a correspondingly lesser dose.

Contents should be used within 12 weeks after the first dose is removed. 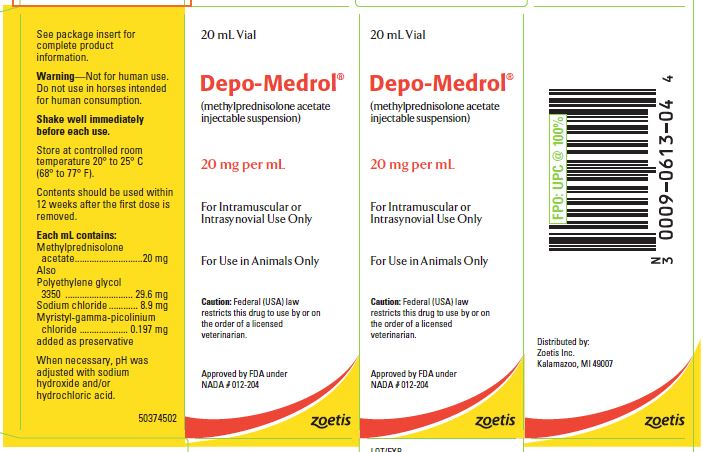 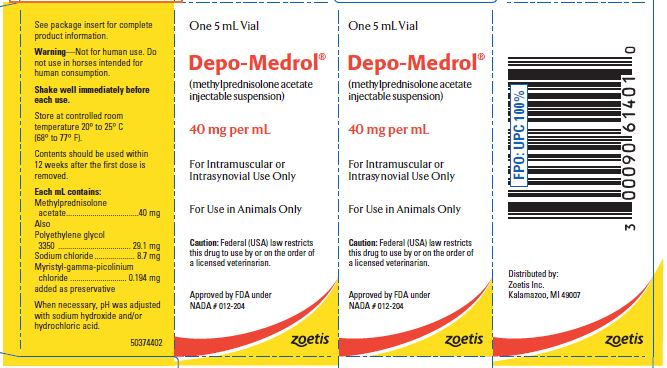