Thyroid hormones, including Levothyroxine Sodium Tablets, either alone or with other therapeutic agents, should not be used for the treatment of obesity or for weight loss.

In euthyroid patients, doses within the range of daily hormonal requirements are ineffective for weight reduction.

Larger doses may produce serious or even life threatening manifestations of toxicity, particularly when given in association with sympathomimetic amines such as those used for their anorectic effects[see Adverse Reactions (6), Drug Interactions (7.7), and Overdosage (10)].

Levothyroxine Sodium Tablets are indicated as an adjunct to surgery and radioiodine therapy in the management of thyrotropin-dependent well-differentiated thyroid cancer.

Administer Levothyroxine Sodium Tablets as a single daily dose, on an empty stomach, one-half to one hour before breakfast.

Evaluate the need for dose adjustments when regularly administering within one hour of certain foods that may affect Levothyroxine Sodium Tablets absorption [see Drug Interactions (7.9) and Clinical Pharmacology (12.3)].

Administer Levothyroxine Sodium Tablets to infants and children who cannot swallow intact tablets by crushing the tablet, suspending the freshly crushed tablet in a small amount (5 mL to 10 mL or 1 teaspoon to 2 teaspoons) of water and immediately administering the suspension by spoon or dropper. Do not store the suspension. Do not administer in foods that decrease absorption of Levothyroxine Sodium Tablets, such as soybean-based infant formula [see Drug Interactions (7.9)].

The dose of Levothyroxine Sodium Tablets for hypothyroidism or pituitary TSH suppression depends on a variety of factors including: the patient's age, body weight, cardiovascular status, concomitant medical conditions (including pregnancy), concomitant medications, co-administered food and the specific nature of the condition being treated [see Dosage and Administration (2.3), Warnings and Precautions (5), and Drug Interactions (7)]. Dosing must be individualized to account for these factors and dose adjustments made based on periodic assessment of the patient's clinical response and laboratory parameters [see Dosage and Administration (2.4)].

The peak therapeutic effect of a given dose of Levothyroxine Sodium Tablets may not be attained for 4 to 6 weeks.

Adjust the dose by 12.5 mcg to 25 mcg increments every 4 to 6 weeks until the patient is clinically euthyroid and the serum TSH returns to normal. Doses greater than 200 mcg per day are seldom required. An inadequate response to daily doses of greater than 300 mcg per day is rare and may indicate poor compliance, malabsorption, drug interactions, or a combination of these factors.

For elderly patients or patients with underlying cardiac disease, start with a dose of 12.5 mcg per day to 25 mcg per day. Increase the dose every 6 to 8 weeks, as needed until the patient is clinically euthyroid and the serum TSH returns to normal. The full replacement dose of Levothyroxine Sodium Tablets may be less than 1 mcg per kg per day in elderly patients.

In patients with severe longstanding hypothyroidism, start with a dose of 12.5 mcg per day to 25 mcg per day. Adjust the dose in 12.5 mcg to 25 mcg increments every 2 to 4 weeks until the patient is clinically euthyroid and the serum TSH level is normalized.

The recommended daily dose of Levothyroxine Sodium Tablets in pediatric patients with hypothyroidism is based on body weight and changes with age as described in Table 1. Start Levothyroxine Sodium Tablets at the full daily dose in most pediatric patients. Start at a lower starting dose in newborns (0-3 months) at risk for cardiac failure and in children at risk for hyperactivity (see below). Monitor for clinical and laboratory response [see Dosage and Administration (2.4)].

Generally, TSH is suppressed to below 0.1 units per liter, and this usually requires a Levothyroxine Sodium Tablets dose of greater than 2 mcg per kg per day. However, in patients with high-risk tumors, the target level for TSH suppression may be lower.

Assess the adequacy of therapy by periodic assessment of laboratory tests and clinical evaluation. Persistent clinical and laboratory evidence of hypothyroidism despite an apparent adequate replacement dose of Levothyroxine Sodium Tablets may be evidence of inadequate absorption, poor compliance, drug interactions, or a combination of these factors.

In adult patients with primary hypothyroidism, monitor serum TSH levels after an interval of 6 to 8 weeks after any change in dose. In patients on a stable and appropriate replacement dose, evaluate clinical and biochemical response every 6 to 12 months and whenever there is a change in the patient's clinical status.

In patients with congenital hypothyroidism, assess the adequacy of replacement therapy by measuring both serum TSH and total or free-T4. Monitor TSH and total or free-T4 in children as follows: 2 and 4 weeks after the initiation of treatment, 2 weeks after any change in dosage, and then every 3 to 12 months thereafter following dose stabilization until growth is completed. Poor compliance or abnormal values may necessitate more frequent monitoring. Perform routine clinical examination, including assessment of development, mental and physical growth, and bone maturation, at regular intervals.

While the general aim of therapy is to normalize the serum TSH level, TSH may not normalize in some patients due to in utero hypothyroidism causing a resetting of pituitary-thyroid feedback. Failure of the serum T4 to increase into the upper half of the normal range within 2 weeks of initiation of Levothyroxine Sodium Tablets therapy and/or of the serum TSH to decrease below 20 units per liter within 4 weeks may indicate the child is not receiving adequate therapy. Assess compliance, dose of medication administered, and method of administration prior to increasing the dose of Levothyroxine Sodium Tablets [see Warnings and Precautions (5.4) and Use in Specific Populations (8.4)].

Monitor serum free-T4 levels and maintain in the upper half of the normal range in these patients.

Levothyroxine Sodium Tablets, in the shape of caplet are available as follows:

Over-treatment with levothyroxine may cause an increase in heart rate, cardiac wall thickness, and cardiac contractility and may precipitate angina or arrhythmias, particularly in patients with cardiovascular disease and in elderly patients. Initiate Levothyroxine Sodium Tablets therapy in this population at lower doses than those recommended in younger individuals or in patients without cardiac disease [see Dosage and Administration (2.3), Use in Specific Populations (8.5)].

If cardiac symptoms develop or worsen, reduce the Levothyroxine Sodium Tablets dose or withhold for one week and restart at a lower dose.

5.4 Prevention of Hyperthyroidism or Incomplete Treatment of Hypothyroidism

Increased bone resorption and decreased bone mineral density may occur as a result of levothyroxine over-replacement, particularly in post-menopausal women. The increased bone resorption may be associated with increased serum levels and urinary excretion of calcium and phosphorous, elevations in bone alkaline phosphatase, and suppressed serum parathyroid hormone levels. Administer the minimum dose of Levothyroxine Sodium Tablets that achieves the desired clinical and biochemical response to mitigate this risk.

Adverse reactions associated with Levothyroxine Sodium Tablets therapy are primarily those of hyperthyroidism due to therapeutic overdosage [see Warnings and Precautions (5), Overdosage (10)]. They include the following:

Pseudotumor cerebri and slipped capital femoral epiphysis have been reported in children receiving levothyroxine therapy. Overtreatment may result in craniosynostosis in infants and premature closure of the epiphyses in children with resultant compromised adult height.

Concurrent use of ketamine and Levothyroxine Sodium Tablets may produce marked hypertension and tachycardia. Closely monitor blood pressure and heart rate in these patients.

Concurrent use of tyrosine-kinase inhibitors such as imatinib may cause hypothyroidism. Closely monitor TSH levels in such patients.

Maternal hypothyroidism during pregnancy is associated with a higher rate of complications, including spontaneous abortion, gestational hypertension, pre-eclampsia, stillbirth, and premature delivery. Untreated maternal hypothyroidism may have an adverse effect on fetal neurocognitive development.

Dose Adjustments During Pregnancy and the Postpartum Period

The initial dose of Levothyroxine Sodium Tablets varies with age and body weight. Dosing adjustments are based on an assessment of the individual patient's clinical and laboratory parameters [see Dosage and Administration (2.3, 2.4)].

In children in whom a diagnosis of permanent hypothyroidism has not been established, discontinue Levothyroxine Sodium Tablets administration for a trial period, but only after the child is at least 3 years of age. Obtain serum T4 and TSH levels at the end of the trial period, and use laboratory test results and clinical assessment to guide diagnosis and treatment, if warranted.

Rapid restoration of normal serum T4 concentrations is essential for preventing the adverse effects of congenital hypothyroidism on intellectual development as well as on overall physical growth and maturation. Therefore, initiate Levothyroxine Sodium Tablets therapy immediately upon diagnosis. Levothyroxine is generally continued for life in these patients.

Closely monitor patients to avoid undertreatment or overtreatment. Undertreatment may have deleterious effects on intellectual development and linear growth. Overtreatment is associated with craniosynostosis in infants, may adversely affect the tempo of brain maturation, and may accelerate the bone age and result in premature epiphyseal closure and compromised adult stature.

Because of the increased prevalence of cardiovascular disease among the elderly, initiate Levothyroxine Sodium Tablets at less than the full replacement dose [see Warnings and Precautions (5.1) and Dosage and Administration (2.3)]. Atrial arrhythmias can occur in elderly patients. Atrial fibrillation is the most common of the arrhythmias observed with levothyroxine overtreatment in the elderly.

The signs and symptoms of overdosage are those of hyperthyroidism [see Warnings and Precautions (5) and Adverse Reactions (6)]. In addition, confusion and disorientation may occur.

Cerebral embolism, shock, coma, and death have been reported. Seizures occurred in a 3-year-old child ingesting 3.6 mg of levothyroxine. Symptoms may not necessarily be evident or may not appear until several days after ingestion of levothyroxine sodium.

For current information on the management of poisoning or overdosage, contact the National Poison Control Center at 1-800-222-1222 or www.poison.org.

Absorption of orally administered T4 from the gastrointestinal tract ranges from 40% to 80%. The majority of the Levothyroxine Sodium Tablets dose is absorbed from the jejunum and upper ileum. The relative bioavailability of Levothyroxine Sodium Tablets, compared to an equal nominal dose of oral levothyroxine sodium solution, is approximately 94%. T4 absorption is increased by fasting, and decreased in malabsorption syndromes and by certain foods such as soybeans. Dietary fiber decreases bioavailability of T4. Absorption may also decrease with age. In addition, many drugs and foods affect T4 absorption [see Drug Interactions (7)].

Circulating thyroid hormones are greater than 99% bound to plasma proteins, including thyroxine-binding globulin (TBG), thyroxine-binding prealbumin (TBPA), and albumin (TBA), whose capacities and affinities vary for each hormone. The higher affinity of both TBG and TBPA for T4 partially explains the higher serum levels, slower metabolic clearance, and longer half-life of T4 compared to T3. Protein-bound thyroid hormones exist in reverse equilibrium with small amounts of free hormone. Only unbound hormone is metabolically active. Many drugs and physiologic conditions affect the binding of thyroid hormones to serum proteins [see Drug Interactions (7)]. Thyroid hormones do not readily cross the placental barrier [see Use in Specific Populations (8.1)].

T4 is slowly eliminated (see Table 7). The major pathway of thyroid hormone metabolism is through sequential deiodination. Approximately 80% of circulating T3 is derived from peripheral T4 by monodeiodination. The liver is the major site of degradation for both T4 and T3, with T4 deiodination also occurring at a number of additional sites, including the kidney and other tissues. Approximately 80% of the daily dose of T4 is deiodinated to yield equal amounts of T3 and reverse T3 (rT3). T3 and rT3 are further deiodinated to diiodothyronine. Thyroid hormones are also metabolized via conjugation with glucuronides and sulfates and excreted directly into the bile and gut where they undergo enterohepatic recirculation.

Standard animal studies have not been performed to evaluate the carcinogenic potential, mutagenic potential or effects on fertility of levothyroxine.

Inform the patient of the following information to aid in the safe and effective use of Levothyroxine Sodium Tablets: 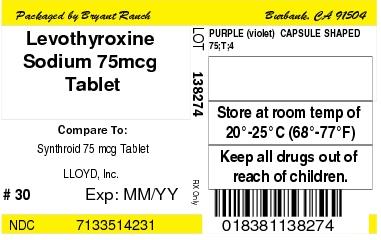 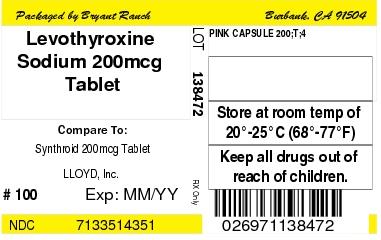 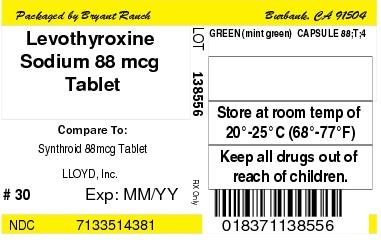 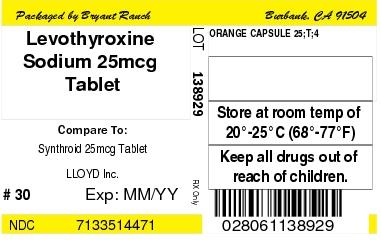 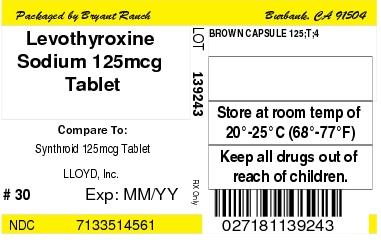 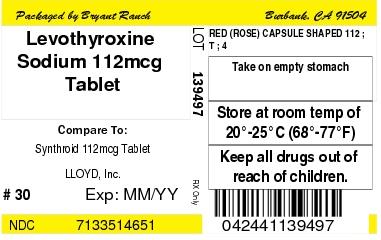 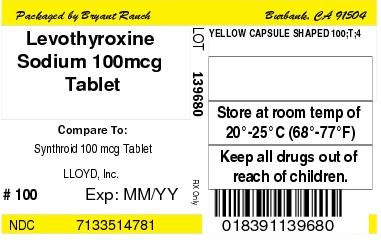 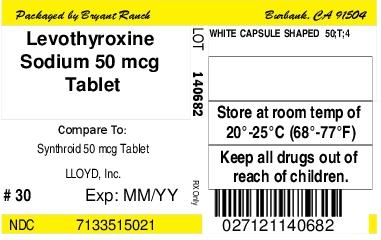 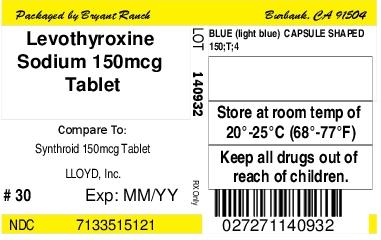 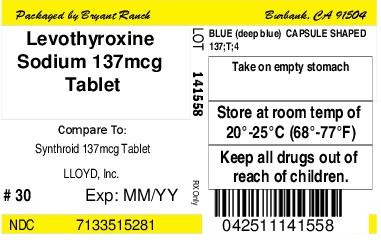 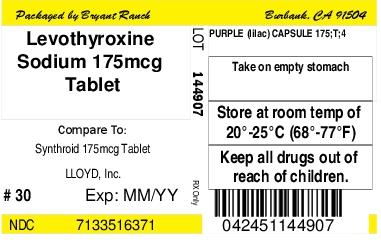