Panretin® gel 0.1% contains alitretinoin and is intended for topical application only. The chemical name is 9-cis-retinoic acid and the structural formula is as follows: 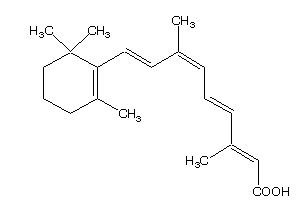 Chemically, alitretinoin is related to vitamin A. It is a yellow powder with a molecular weight of 300.44 and a molecular formula of C20H28O2. It is slightly soluble in ethanol (7.01 mg/g at 25oC) and insoluble in water. Panretin® gel is a clear, yellow gel containing 0.1% (w/w) alitretinoin in a base of dehydrated alcohol USP, polyethylene glycol 400 NF, hydroxypropyl cellulose NF, and butylated hydroxytoluene NF.

Alitretinoin (9-cis-retinoic acid) is a naturally-occurring endogenous retinoid that binds to and activates all known intracellular retinoid receptor subtypes (RARα, RARβ, RARγ, RXRα, RXRβ and RXRγ). Once activated these receptors function as transcription factors that regulate the expression of genes that control the process of cellular differentiation and proliferation in both normal and neoplastic cells. Alitretinoin inhibits the growth of Kaposi’s sarcoma (KS) cells in vitro.

No formal pharmacokinetic drug interaction studies between Panretin® gel and antiretroviral agents have been conducted.

Panretin® gel is not a systemic therapy; it therefore cannot treat visceral Kaposi’s sarcoma (KS) nor prevent the development of new KS lesions where it has not been applied. Visceral KS disease was not monitored in these trials, and the appearance of new KS lesions was not considered part of the response assessment in clinical trials.

Panretin® gel was evaluated in two multicenter, prospective, randomized, double-blind, vehicle-controlled studies in patients with cutaneous lesions of AIDS-related KS. In both studies the primary efficacy endpoint was the patients’ cutaneous KS tumor response rate through 12 weeks of study drug treatment which was assessed by evaluating from 3 to 8 KS index lesions according to the modified AIDS Clinical Trials Group (ACTG) response criteria as applied to topical therapy (i.e., evaluation of height and area reductions of the index lesions only; progressive disease in non-index lesions and new lesions were not considered progressive disease; progressive disease was scored only in the treated index lesions). A global evaluation by physicians was also carried out. It considered all of the patient’s treated lesions (index and other) compared to baseline. In this evaluation, patients with at least a 50% improvement in the KS lesions were considered responders. In addition, photographs of lesions in patients considered responders by the modified ACTG criteria were examined by the FDA for a cosmetically beneficial response, defined as at least a 50% improvement in appearance compared to baseline, considering both the KS lesions and dermal toxicity at the lesion site, in at least 50% of the index lesions and maintained for at least 3 weeks. Patients were also asked about their satisfaction with the treatment.

In Study 1, a total of 268 patients were entered from centers in the U.S. and Canada. Patients were treated topically three to four times a day with either Panretin® gel or a matching vehicle gel for a minimum of 12 weeks, followed by an open-label phase in patients who had not yet progressed on Panretin® gel. Responses during the double-blind phase are shown in Table 1. Responses to Panretin® gel were seen in both previously untreated patients and in patients with prior systemic and/or topical KS treatment. A total of 72 patients responded to Panretin® gel during the randomized or crossover portions of the study. At a median duration of monitoring of 16 weeks, only 15% of the 72 patients had relapsed. Panretin® gel would not be expected to affect development of new lesions in untreated areas and these were seen in about 50% of patients, at similar rates in treated and untreated patients, responders and non-responders. The patients’ assessment of their overall satisfaction with the drug effect on all treated lesions significantly favored Panretin® gel.

Study 2 was an international study with a planned enrollment of 270 patients. Patients were treated topically twice a day with Panretin® gel or a matching vehicle for 12 weeks. The study was stopped early because of positive interim results in the initial 82 patient data set. Results of the study are shown in Table 1. Responses to Panretin® gel were seen both in previously untreated patients and in patients with prior systemic and/or topical KS treatment.

In the clinical trials, responses were seen as early as two (2) weeks; most patients, however, required four (4) to eight (8) weeks of treatment, and some patients did not experience significant improvement until 14 or more weeks of treatment. The cumulative percentage of patients who achieved a response was less than 1% at 2 weeks, 10% at 4 weeks, and 28% at 8 weeks.


Photographs of patients revealed a substantial erythematous and edematous response in some cases, leading to a cosmetically mixed outcome even in apparent responders. Nonetheless, in Study 1 it appeared that a cosmetically satisfactory result occurred at about the same rate as the Physician’s Global response rate and in both studies such a response was more frequent than in the vehicle control.

Panretin® gel is contraindicated in patients with a known hypersensitivity to retinoids or to any of the ingredients of the product.

Patients who are applying Panretin® gel should not concurrently use products that contain DEET (N,N-diethyl-m-toluamide), a common component of insect repellent products. Animal toxicology studies showed increased DEET toxicity when DEET was included as part of the formulation.


Although there was no clinical evidence in the vehicle-controlled studies of drug interactions with systemic antiretroviral agents, including protease inhibitors, macrolide antibiotics, and azole antifungals, the effect of Panretin® gel on the steady-state concentrations of these drugs is not known. No drug interaction data are available on concomitant administration of Panretin® gel and systemic anti-KS agents.

No interference with laboratory tests has been observed.

Long-term studies in animals to assess the carcinogenic potential of 9-cis-retinoic acid have not been conducted. 9-cis-Retinoic acid was not mutagenic in vitro (bacterial assays, Chinese hamster ovary cell HGPRT mutation assay) and was not clastogenic in vitro (chromosome aberration test in human lymphocytes) nor in vivo (mouse micronucleus test).

Inadequate information is available to assess safety and efficacy in patients age 65 years or older.

The safety of Panretin® gel has been assessed in clinical studies of 385 patients with AIDS-related KS. Adverse events associated with the use of Panretin® gel in patients with AIDS-related KS occurred almost exclusively at the site of application. The dermal toxicity begins as erythema; with continued application of Panretin® gel, erythema may increase and edema may develop. Dermal toxicity may become treatment-limiting, with intense erythema, edema, and vesiculation. Usually, however, adverse events are mild to moderate in severity; they led to withdrawal from the study in only 7% of the patients. Severe local (application site) skin adverse events occurred in about 10% of patients in the U.S. study (versus 0% in the vehicle control). Table 2 lists the adverse events that occurred at the application site with an incidence of at least 5% during the double-blind phase in the Panretin® gel-treated group and in the vehicle control group in either of the two controlled studies. Adverse events were reported at other sites but generally were similar in the two groups.

Sufficient gel should be applied to cover the lesion with a generous coating. The gel should be allowed to dry for three to five minutes before covering with clothing. Because unaffected skin may become irritated, application of the gel to normal skin surrounding the lesions should be avoided. In addition, do not apply the gel on or near mucosal surfaces of the body.

A response of KS lesions may be seen as soon as two weeks after initiation of therapy but most patients require longer application. With continued application, further benefit may be attained. Some patients have required over 14 weeks to respond. In clinical trials, Panretin® gel was applied for up to 96 weeks. Panretin® gel should be continued as long as the patient is deriving benefit.

Occlusive dressings should not be used with Panretin® gel.