Metaxalone Tablets, USP are available as an 800 mg, capsule shaped, scored pink tablet.
Chemically, metaxalone, USP is 5-[(3,5-dimethylphenoxy)methyl]-2-oxazolidinone. The empirical formula is C12H15NO3, which corresponds to a molecular weight of 221.25. The structural formula is: 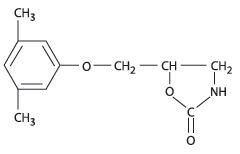 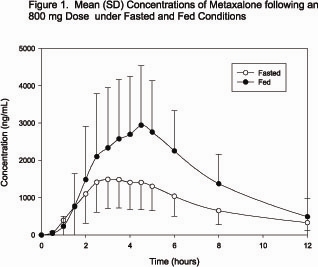 The effect of gender on the pharmacokinetics of metaxalone was assessed in an open label study, in which 48 healthy adult volunteers (24 males, 24 females) were administered two metaxalone 400 mg tablets (800 mg) under fasted conditions. The bioavailability of metaxalone was significantly higher in females compared to males as evidenced by Cmax (2,115 ng/mL versus 1,335 ng/mL) and AUC∞ (17,884 ng·h/mL versus 10,328 ng·h/mL). The mean half-life was 11.1 hours in females and 7.6 hours in males. The apparent volume of distribution of metaxalone was approximately 22% higher in males than in females, but not significantly different when adjusted for body weight. Similar findings were also seen when the previously described combined dataset was used in the analysis.

Metaxalone may enhance the effects of alcohol and other CNS depressants.

The sedative effects of metaxalone and other CNS depressants (e.g., alcohol, benzodiazepines, opioids, tricyclic antidepressants) may be additive. Therefore, caution should be exercised with patients who take more than one of these CNS depressants simultaneously.

Metaxalone Tablets, USP 800 mg are available as pink, capsule shape scored tablet debossed with ‘SG’ on scored side and ‘323’ on the other.

You can ask your pharmacist or doctor for information about Metaxalone Tablets USP, or call 1-888-375-3784.

This container is not intended for household use.

SEALED FOR YOUR PROTECTION