For Oral Use in Dogs Only

CAUTION: Federal law restricts this drug to use by or on the order of a licensed veterinarian.

USP Solubility: Soluble in acetone, in chloroform, in dioxane, in ether, and in vegetable oils; sparingly soluble in alcohol; insoluble in water.

INDICATION: INCURIN® Tablets are indicated for the control of estrogen-responsive urinary incontinence in ovariohysterectomized female dogs.

Human Warnings: Not for human use. Keep out of the reach of children. Women who are of child-bearing age or those who are breastfeeding should use caution when administering INCURIN® Tablets. Wash your hands with soap and water after administration to avoid exposure to the drug. Consult a physician in case of accidental ingestion by humans.

Animal Warnings: Some estrogens have been associated with bone marrow changes and an increased risk of mammary tumors. However, target animal safety study results and foreign post-market pharmacovigilance data for INCURIN® Tablets have shown that estriol-treated dogs are at low risk for developing these conditions.

PRECAUTIONS: Evaluation of factors contributing to urinary incontinence should be considered prior of administration of INCURIN® Tablets.

The concomitant use of INCURIN® Tablets with glucocorticoids has not been evaluated.

The use of INCURIN® Tablets in dogs with liver disease has not been evaluated.

The safe use of INCURIN® Tablets has not been evaluated in intact female dogs, pregnant or lactating dogs, male dogs, and dogs less than 1 year of age.

ADVERSE REACTIONS: In the initial phase of a placebo-controlled field study conducted to determine effectiveness, 115 of 226 dogs were dosed with INCURIN® Tablets orally at 2 mg per day for 14 days. Adverse reactions during the first study phase included primarily gastrointestinal and estrogenic effects, as summarized in Table 1.

In the second phase of the field study, all dogs received treatment with INCURIN® Tablets from Day 14 to Day 42; the drug dose was adjusted up or down (not to exceed 2 mg per day) at weekly intervals depending on whether urinary incontinence was controlled. Table 2 summarizes reported adverse reactions in dogs treated with INCURIN® Tablets during the second study phase. Adverse reactions tended to lessen when dogs received lower drug doses. One dog that received 10 doses of estriol was removed due to suspected uterine stump pyometra. The relationship between this adverse reaction and INCURIN® Tablets could not be determined.

Extended-use studies continued after the field studies involving more than 300 dogs. Additional adverse reactions to those seen in the field studies included hyperpigmentation and lichenification of the vulva. Also, 3 dogs receiving INCURIN® Tablets were euthanized due to aggressive behavior.

Foreign market experience: Foreign post-market pharmacovigilance data for INCURIN® Tablets were collected from the years 2000 through 2010 by Intervet, Inc. Approximately 20% of reported adverse events were for local or general alopecia. Vaginal hemorrhage, possible stump pyometra, an increase in epileptic seizures, and anemia, leukopenia, and thrombocytopenia were seen in 1 or more dogs. Other adverse events reported were similar to those seen during the US studies.

Estriol is a natural estrogen. Estrogens increase the resting muscle tone of the urethra in females and can be used to treat female dogs with urinary incontinence due to estrogen depletion. Estriol is rapidly absorbed after oral administration. It has a high affinity for receptors in cells of the lower urogenital tract, but a short receptor occupancy time that limits the undesirable effects of endometrial proliferation, skeletal muscle growth, and bone marrow suppression associated with long-term estrogen-estrogen receptor binding.

As one of the three naturally occurring estrogens, estriol is a lipophilic compound that can passively diffuse through cell membranes and bind to estrogen receptors in the nucleus to regulate gene expression. After an oral dose of 2 mg/dog/day in fed female dogs, Tmax occurred between 0.5-2 hrs (average 0.8 hrs) with corresponding Cmax values of 220-1150 pg/mL (average 650 pg/mL). Entero-hepatic recirculation and drug reabsorption may cause a second concentration peak in plasma around 4-12 hrs after dosing. Its elimination T½ ranges from 8 to 12 hours based on a multiple oral dose study in 6 adult female dogs.

However, the apparent estriol recycling observed in most dogs produced multiple peaks that confound the accurate determination of T½. The effect of prandial state on oral estriol bioavailability has not been evaluated. Repeated oral administration may result in elevated estriol systemic exposure.

EFFECTIVENESS: A multi-site, masked, placebo-controlled field study was conducted to evaluate the effectiveness of INCURIN® Tablets. Two hundred and twenty-six client-owned, ovariohysterectomized female dogs 1 year of age or older with at least 3 episodes of urinary incontinence each week were randomly allocated to receive either INCURIN® Tablets or placebo. Two hundred and six dogs (106 treated with INCURIN® Tablets and 100 treated with placebo) from 22 sites were evaluated for effectiveness. Each dog was dosed orally with either two 1 mg tablets of INCURIN® Tablets or two tablets of placebo once per day for 14 days. During treatment, owners recorded the frequency of urinary incontinence episodes daily, and investigators rated response to treatment weekly (continent/improved or no change/worse). Treatment success was based upon response to treatment and a targeted reduction in the frequency of urinary incontinence episodes at Day 14 compared to Day 0. The proportion of dogs achieving treatment success was statistically significantly greater (p = 0.0038) in the group treated with INCURIN® Tablets (66%) than in the placebo-treated group (37%) at Day 14.

There were no clinically significant changes in hematology or serum chemistry during either phase of the study.

ANIMAL SAFETY: In a 26-week safety study, 24 healthy, ovariohysterectomized female Beagle dogs approximately 1 year of age, weighing 7.3 to 10.5 kg, were randomly divided into 4 groups of 6 animals each. INCURIN® Tablets were administered orally at doses of 0 (placebo), 1× (2 mg), 3× (6 mg) and 5× (10 mg) the maximum proposed label dose of 2 mg per dog per day. Estrogenic effects such as swollen vulva, mammary hyperplasia, and vulvar discharge occurred frequently in all dogs that received INCURIN® Tablets and increased in a dose-dependent manner. On gross necropsy, all dogs treated with INCURIN® Tablets had enlarged vulvas except 1 dog that received 2 mg per day. Microscopically, the vulvas and vaginas of treated dogs had a proestrus-like appearance, with or without a lymphoplasmacytic infiltrate. In addition, approximately one-third of the dogs in each group treated with INCURIN® Tablets had lymphoplasmacytic infiltrate and urothelium hyperplasia of the renal pelvis. One dog treated with 10 mg per day had urinary bladder inflammation. Dogs that received 6 mg and 10 mg of INCURIN® Tablets per day had increased white blood cell counts, absolute neutrophil counts and platelet counts compared to dogs in the other 2 groups. There were no changes related to INCURIN® Tablet administration noted in the microscopic evaluation of bone marrow smears. The myeloid:erythroid (M:E) cell ratios were comparable between dogs that received 10 mg of INCURIN® Tablets per day and those treated with placebo.

HOW SUPPLIED: INCURIN® Tablets contain 1 mg of estriol in each tablet and are supplied in foil-sealed blister packs of 30 single-scored tablets. Two carton sizes containing either 30 tablets (one blister pack) or 90 tablets (three blister packs) are available.

For Oral Use in Dogs Only

CAUTION: Federal law restricts this drug to
use by or on the order of a licensed veterinarian.

Keep Out of Reach of Children 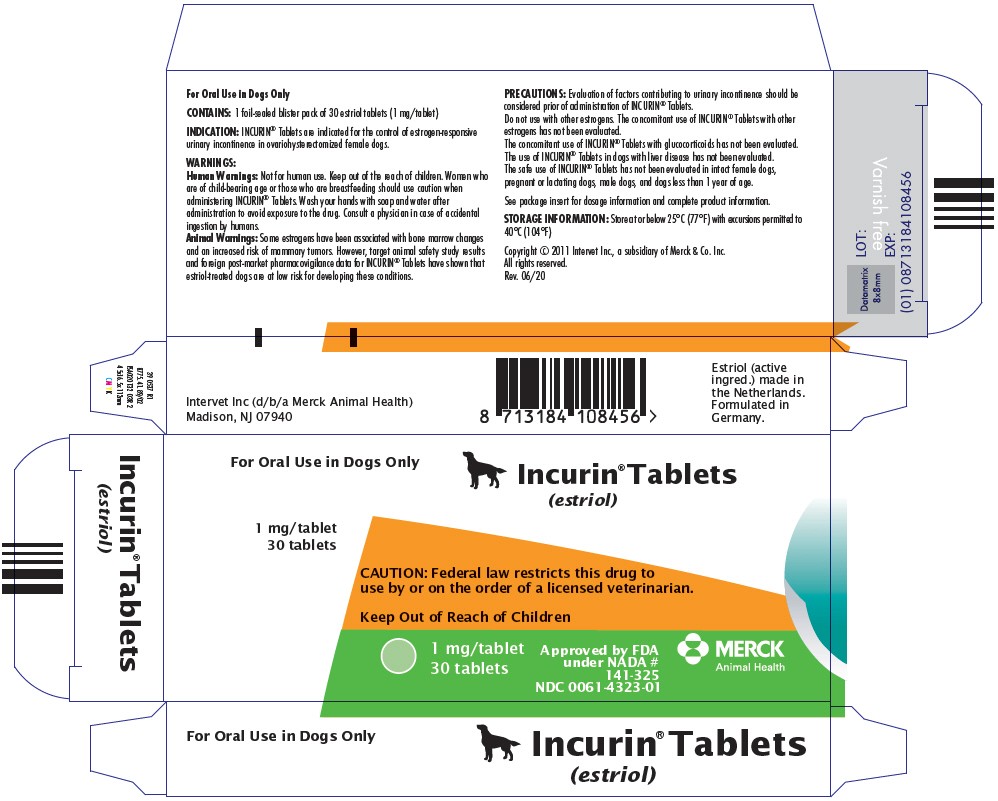