Cyproheptadine HCl, is an antihistaminic and antiserotonergic agent. Cyproheptadine hydrochloride, USP is a white to slightly yellowish crystalline solid, with a molecular weight of 350.89, which is soluble in water, freely soluble in methanol, sparingly soluble in ethanol, soluble in chloroform, and practically insoluble in ether. It is the sesquihydrate 4-(5H-dibenzo[a,d]cyclohepten-5-ylidene)-1-methylpiperidine hydrochloride. The molecular formula of the anhydrous salt is C21H21N•HCl and the structural formula of the anhydrous salt is as follows: 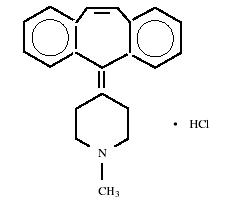 Cyproheptadine hydrochloride tablets USP, 4 mg are available as white to off-white color, round flat face tablet with debossed “B137” on one side and scored on the other, containing 4 mg of cyproheptadine HCl packaged in HDPE bottles of 100 and 1000 tablets.