Daunorubicin hydrochloride is the hydrochloride salt of an anthracycline cytotoxic antibiotic produced by a strain of Streptomyces coeruleorubidus. It is provided as a deep red sterile liquid in vials for intravenous administration only. Each mL contains 5 mg daunorubicin (equivalent to 5.34 mg of daunorubicin hydrochloride), 9 mg sodium chloride; sodium hydroxide and/or hydrochloric acid (to adjust pH), and water for injection, q.s. It has the following structural formula which may be described with the chemical name of (1S,3S)-3-Acetyl-1,2,3,4,6,11-hexahydro-3,5,12-trihydroxy-10-methoxy-6,11-dioxo-1-naphthacenyl 3-amino-2,3,6-trideoxy-α-L- lyxo-hexopyranoside hydrochloride. Its molecular formula is C 27H 29NO 10•HCl with a molecular weight of 563.99. It is a hygroscopic crystalline powder. The pH of a 5 mg/mL aqueous solution is 3 to 4. 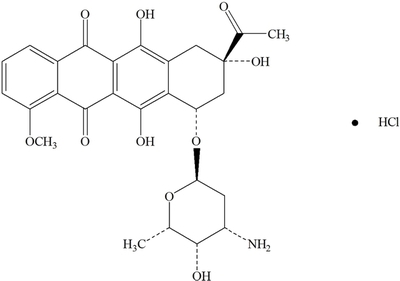 The addition of daunorubicin hydrochloride to the two-drug induction regimen of vincristine-prednisone in the treatment of childhood acute lymphocytic leukemia does not increase the rate of complete remission. In children receiving identical CNS prophylaxis and maintenance therapy (without consolidation), there is prolongation of complete remission duration (statistically significant, p<0.02) in those children induced with the three drug (daunorubicin-vincristine-prednisone) regimen as compared to two drugs. There is no evidence of any impact of daunorubicin hydrochloride on the duration of complete remission when a consolidation (intensification) phase is employed as part of a total treatment program.

Daunorubicin hydrochloride injection is contraindicated in patients who have shown a hypersensitivity to it.

In adults, at cumulative doses exceeding 550 mg/m 2, there is an increased incidence of drug-induced congestive heart failure. Based on prior clinical experience with doxorubicin, this limit appears lower, namely 400 mg/m 2, in patients who received radiation therapy that encompassed the heart.

There is no absolutely reliable method of predicting the patients in whom acute congestive heart failure will develop as a result of the cardiac toxic effect of daunorubicin hydrochloride. However, certain changes in the electrocardiogram and a decrease in the systolic ejection fraction from pre-treatment baseline may help to recognize those patients at greatest risk to develop congestive heart failure. On the basis of the electrocardiogram, a decrease equal to or greater than 30% in limb lead QRS voltage has been associated with a significant risk of drug-induced cardiomyopathy. Therefore, an electrocardiogram and/or determination of systolic ejection fraction should be performed before each course of daunorubicin hydrochloride. In the event that one or the other of these predictive parameters should occur, the benefit of continued therapy must be weighed against the risk of producing cardiac damage.

Significant hepatic or renal impairment can enhance the toxicity of the recommended doses of daunorubicin hydrochloride; therefore, prior to administration, evaluation of hepatic function and renal function using conventional clinical laboratory tests is recommended (see DOSAGE AND ADMINISTRATION section ).

Extravasation of daunorubicin hydrochloride at the site of intravenous administration can cause severe local tissue necrosis. (see ADVERSE REACTIONS section)

Daunorubicin hydrochloride may induce hyperuricemia secondary to rapid lysis of leukemic renal cells. As a precaution, allopurinol administration is usually begun prior to initiating antileukemic therapy. Blood uric acid levels should be monitored and appropriate therapy initiated in the event that hyperuricemia develops.

It is recommended that the dosage of daunorubicin hydrochloride injection be reduced in instances of hepatic or renal impairment. For example, using serum bilirubin and serum creatinine as indicators of liver and kidney function, the following dose modifications are recommended:

For patients 60 years of age and above, daunorubicin hydrochloride injection 30 mg/m 2/day IV on days 1, 2, and 3 of the first course and on days 1, 2 of subsequent courses AND cytosine arabinoside 100 mg/m 2/day IV infusion daily for 7 days for the first course and for 5 days for subsequent courses. This daunorubicin hydrochloride injection dose-reduction is based on a single study and may not be appropriate if optimal supportive care is available.

Daunorubicin hydrochloride injection 25 mg/m 2 IV on day 1 every week, vincristine 1.5 mg/m 2 IV on day 1 every week, prednisone 40 mg/m 2 PO daily. Generally, a complete remission will be obtained within four such courses of therapy; however, if after four courses the patient is in partial remission, an additional one or, if necessary, two courses may be given in an effort to obtain a complete remission.

In children less than 2 years of age or below 0.5 m2 body surface area, it has been recommended that the daunorubicin hydrochloride injection dosage calculation should be based on weight (1 mg/kg) instead of body surface area.

If daunorubicin hydrochloride injection contacts the skin or mucosae, the area should be washed thoroughly with soap and water. Procedures for proper handling and disposal of anticancer drugs should be considered. Several guidelines on this subject have been published. 1-7 There is no general agreement that all of the procedures recommended in the guidelines are necessary or appropriate. 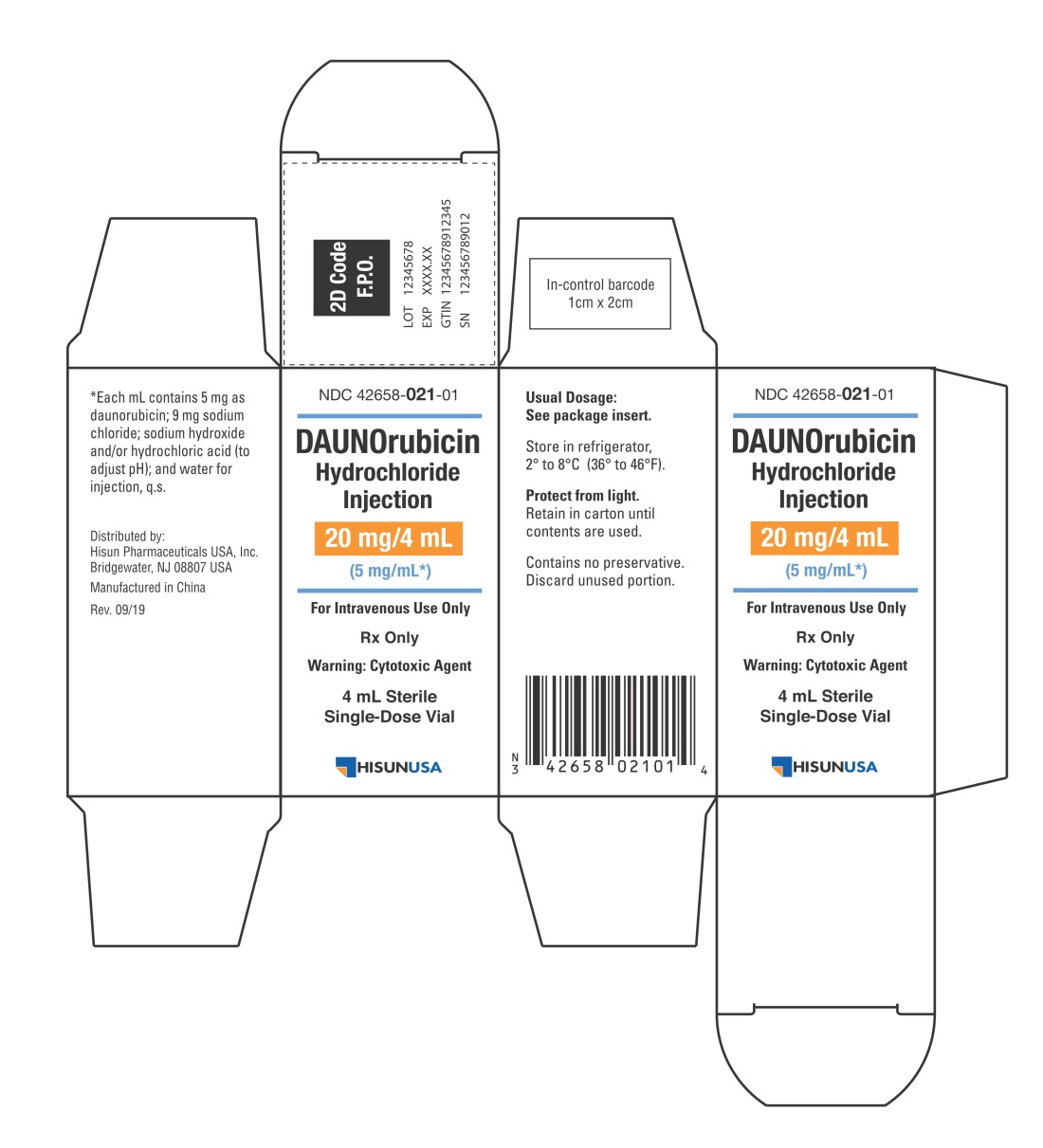 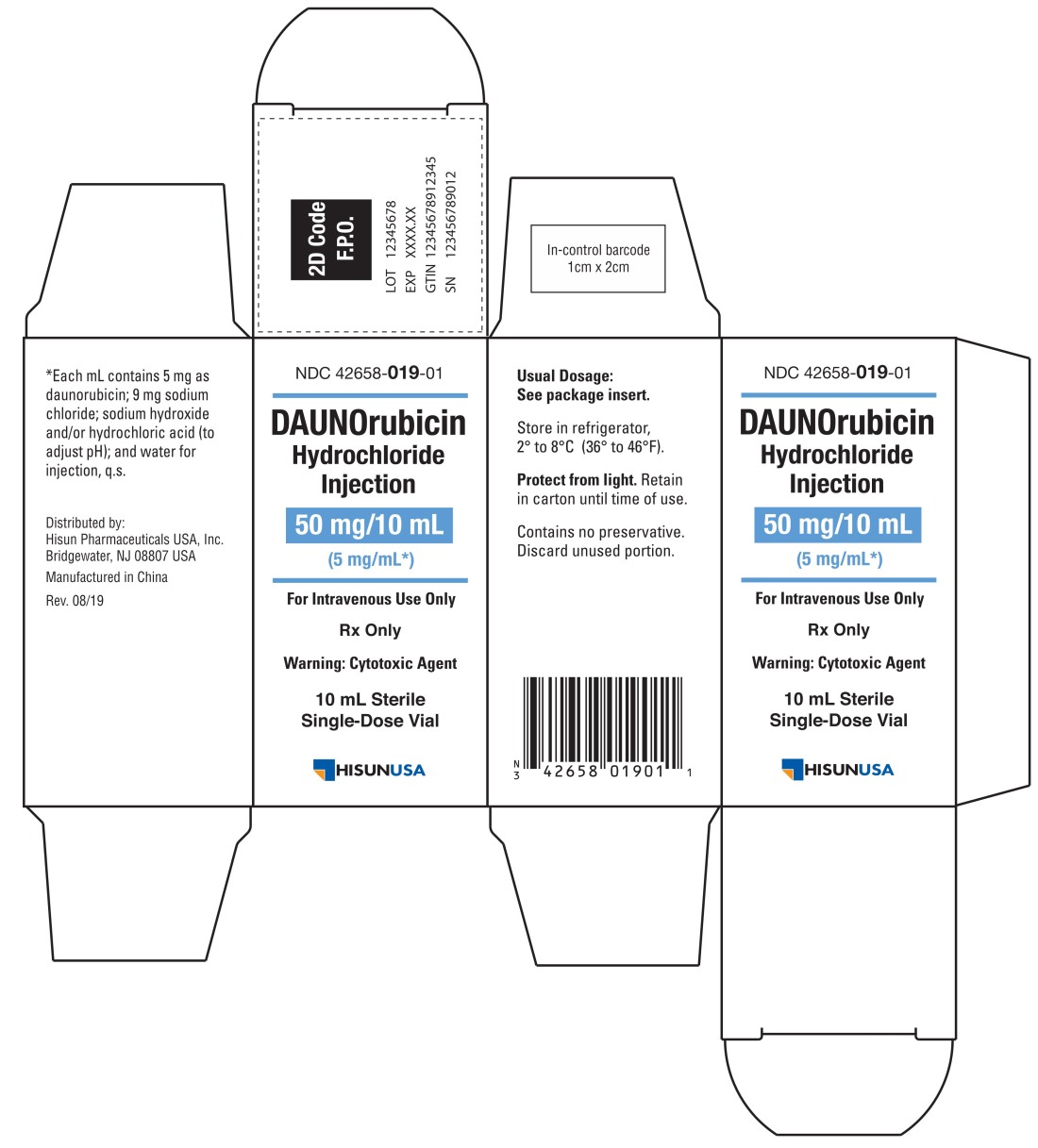