FOR SUBCUTANEOUS USE ONLY

Ganirelix Acetate Injection is a synthetic decapeptide with high antagonistic activity against naturally occurring gonadotropin-releasing hormone (GnRH). Ganirelix Acetate is derived from native GnRH with substitutions of amino acids at positions 1, 2, 3, 6, 8, and 10 to form the following molecular formula of the peptide: N-acetyl-3-(2-naphthyl)-D-alanyl-4-chloro-D-phenylalanyl-3-(3-pyridyl)-D-alanyl-L-seryl-L-tyrosyl-N9,N10-diethyl-D-homoarginyl-L-leucyl-N9,N10-diethyl-L-homoarginyl-L-prolyl-D-alanylamide acetate. The molecular weight for Ganirelix Acetate is 1570.4 as an anhydrous free base. The structural formula is as follows:

The pulsatile release of GnRH stimulates the synthesis and secretion of luteinizing hormone (LH) and follicle-stimulating hormone (FSH). The frequency of LH pulses in the mid and late follicular phase is approximately 1 pulse per hour. These pulses can be detected as transient rises in serum LH. At midcycle, a large increase in GnRH release results in an LH surge. The midcycle LH surge initiates several physiologic actions including: ovulation, resumption of meiosis in the oocyte, and luteinization. Luteinization results in a rise in serum progesterone with an accompanying decrease in estradiol levels.

The mean (SD) volume of distribution of Ganirelix Acetate in healthy females following intravenous administration of a single 250-mcg dose is 43.7 (11.4) liters (L). In vitro protein binding to human plasma is 81.9%.

On average, 97.2% of the total radiolabeled Ganirelix Acetate dose is recovered in the feces and urine (75.1% and 22.1%, respectively) over 288 h following intravenous single dose administration of 1 mg [14C]-Ganirelix Acetate. Urinary excretion is virtually complete in 24 h, whereas fecal excretion starts to plateau 192 h after dosing.

The pharmacokinetics of Ganirelix Acetate Injection have not been determined in special populations such as geriatric, pediatric, renally impaired and hepatically impaired patients (see PRECAUTIONS).

Formal in vivo or in vitro drug-drug interaction studies have not been conducted (see PRECAUTIONS). Since Ganirelix Acetate can suppress the secretion of pituitary gonadotropins, dose adjustments of exogenous gonadotropins may be necessary when used during controlled ovarian hyperstimulation (COH).

Transient LH rises alone were not deleterious to achieving pregnancy with Ganirelix Acetate at doses of 125 mcg (3/6 subjects) and 250 mcg (1/1 subjects). In addition, none of the subjects with LH rises ≥ 10 mIU/mL had premature luteinization indicated by a serum progesterone above 2 ng/mL.

The mean number of days of Ganirelix Acetate treatment was 5.4 (2–14).

The midcycle LH surge initiates several physiologic actions including: ovulation, resumption of meiosis in the oocyte, and luteinization. In 463 subjects administered Ganirelix Acetate Injection 250 mcg, a premature LH surge prior to hCG administration, (LH rise ≥ 10 mIU/mL with a significant rise in serum progesterone > 2 ng/mL, or a significant decline in serum estradiol) occurred in less than 1% of subjects.

Ganirelix Acetate Injection is contraindicated under the following conditions:

Special care should be taken in women with signs and symptoms of active allergic conditions. Cases of hypersensitivity reactions (both generalized and local), including anaphylaxis (including anaphylactic shock), angioedema and urticaria, have been reported with Ganirelix Acetate, as early as with the first dose, during post-marketing surveillance (see ADVERSE REACTIONS). If a hypersensitivity reaction is suspected, Ganirelix Acetate should be discontinued and appropriate treatment administered. In the absence of clinical experience, Ganirelix Acetate treatment is not advised in women with severe allergic conditions.

The needle shield of this product contains dry natural rubber/latex which comes into contact with this product and may cause allergic reactions (see CONTRAINDICATIONS and HOW SUPPLIED).

Prior to therapy with Ganirelix Acetate Injection, patients should be informed of the duration of treatment and monitoring procedures that will be required. The risk of possible adverse reactions should be discussed (see ADVERSE REACTIONS).

Ganirelix Acetate should not be prescribed if the patient is pregnant.

A neutrophil count ≥ 8.3 ( x 109/L) was noted in 11.9% (up to 16.8 x 109/L) of all subjects treated within the adequate and well-controlled clinical trials. In addition, downward shifts within the Ganirelix Acetate Injection group were observed for hematocrit and total bilirubin. The clinical significance of these findings was not determined.

No formal drug-drug interaction studies have been performed.

Carcinogenesis and Mutagenesis, Impairment of Fertility

Long-term toxicity studies in animals have not been performed with Ganirelix Acetate Injection to evaluate the carcinogenic potential of the drug. Ganirelix Acetate did not induce a mutagenic response in the Ames test (S. typhimurium and E. coli) or produce chromosomal aberrations in in vitro assay using Chinese Hamster Ovary cells.

Ganirelix Acetate Injection is contraindicated in pregnant women. When administered from Day 7 to near term to pregnant rats and rabbits at doses up to 10 and 30 mcg/day (approximately 0.4 to 3.2 times the human dose based on body surface area), Ganirelix Acetate increased the incidence of litter resorption. There was no increase in fetal abnormalities. No treatment-related changes in fertility, physical, or behavioral characteristics were observed in the offspring of female rats treated with Ganirelix Acetate during pregnancy and lactation.

The effects on fetal resorption are logical consequences of the alteration in hormonal levels brought about by the antigonadotropic properties of this drug and could result in fetal loss in humans. Therefore, this drug should not be used in pregnant women (see CONTRAINDICATIONS).

Ganirelix Acetate Injection should not be used by lactating women. It is not known whether this drug is excreted in human milk.

Clinical studies with Ganirelix Acetate Injection did not include a sufficient number of subjects aged 65 and over.

During post-marketing surveillance, rare cases of hypersensitivity reactions, including anaphylaxis (including anaphylactic shock), angioedema and urticaria have been reported with Ganirelix Acetate, as early as with the first dose (see PRECAUTIONS).

There have been no reports of overdosage with Ganirelix Acetate Injection in humans.

After initiating FSH therapy on Day 2 or 3 of the cycle, Ganirelix Acetate Injection 250 mcg may be administered subcutaneously once daily during the mid to late portion of the follicular phase. By taking advantage of endogenous pituitary FSH secretion, the requirement for exogenously administered FSH may be reduced. Treatment with Ganirelix Acetate should be continued daily until the day of hCG administration. When a sufficient number of follicles of adequate size are present, as assessed by ultrasound, final maturation of follicles is induced by administering hCG. The administration of hCG should be withheld in cases where the ovaries are abnormally enlarged on the last day of FSH therapy to reduce the chance of developing OHSS (Ovarian Hyperstimulation Syndrome).

Ganirelix Acetate Injection is supplied in:

Disposable, ready for use, single dose, sterile, prefilled 1 mL glass syringes containing 250 mcg/0.5 mL aqueous solution of Ganirelix Acetate closed with a rubber piston that does not contain latex. Each Ganirelix Acetate sterile, prefilled syringe is affixed with a 27 gauge × ½-inch needle closed by a needle shield of dry natural rubber/latex which comes into contact with this product. (See CONTRAINDICATIONS and PRECAUTIONS, General.)

For Subcutaneous Use
Rx only

Caution: The needle cover contains dry natural
rubber/latex which comes into contact with this
product and may cause allergic reactions. 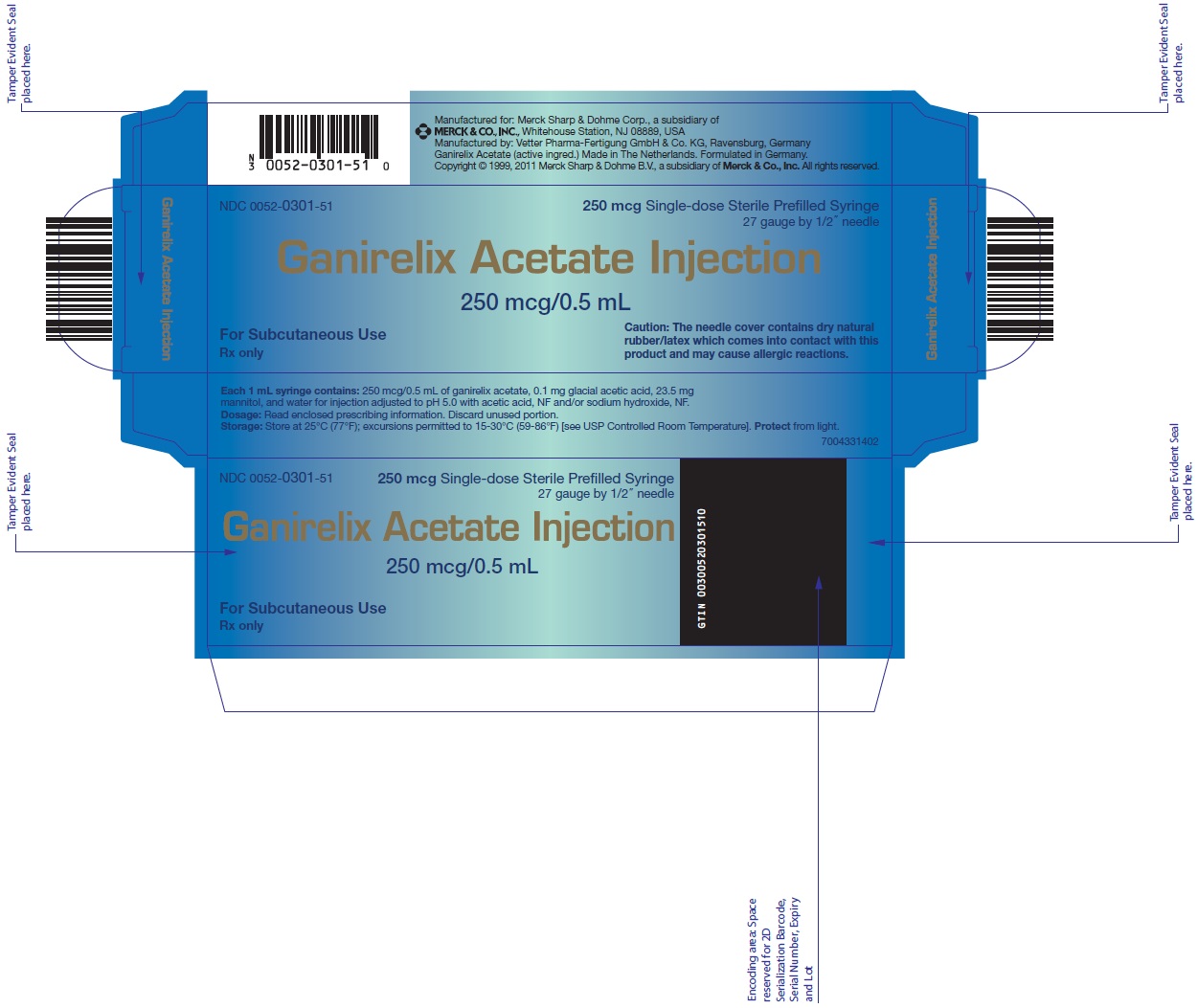