Lithium toxicity is closely related to serum lithium levels, and can occur at doses close to therapeutic levels. Facilities for prompt and accurate serum lithium determinations should be available before initiating therapy.

Each capsule for oral administration contains 150 mg or 300 mg of lithium carbonate. In addition, each capsule contains the following inactive ingredient: Talc.

Lithium is an element of the alkali-metal group with atomic number 3, atomic weight 6.94 and an emission line at 671 nm on the flame photometer.

Lithium may cause fetal harm when administered to a pregnant woman. There have been reports of lithium having adverse effects on nidations in rats, embryo viability in mice, and metabolism in-vitro of rat testis and human spermatozoa have been attributed to lithium, as have teratogenicity in submammalian species and cleft palates in mice. Studies in rats, rabbits and monkeys have shown no evidence of lithium-induced teratology. Data from lithium birth registries suggest an increase in cardiac and other anomalies, especially Ebstein's anomaly. If the patient becomes pregnant while taking lithium, she should be apprised of the potential risk to the fetus. If possible, lithium should be withdrawn for at least the first trimester unless it is determined that this would seriously endanger the mother.

The ability to tolerate lithium is greater during the acute manic phase and decreases when manic symptoms sub-side (see DOSAGE AND ADMINISTRATION).

Information for the Patients:

Drug Interactions: Combined use of haloperidol and lithium.

An encephalopathic syndrome (characterized by weakness, lethargy, fever, tremulousness and confusion, extrapyramidal symptoms, leukocytosis, elevated serum enzymes, BUN and FBS) followed by irreversible brain damage has occurred in a few patients treated with lithium plus haloperidol. A causal relationship between these events and the concomitant administration of lithium and haloperidol has not been established; however, patients receiving such combined therapy should be monitored closely for early evidence of neurological toxicity and treatment discontinued promptly if such signs appear.

Indomethacin and piroxicam have been reported to increase significantly, steady state plasma lithium levels. In some cases lithium toxicity has resulted from such interactions. There is also some evidence that other non-steroidal, anti-inflammatory agents may have a similar effect. When such combinations are used, increased plasma lithium level monitoring is recommended.

Diarrhea, vomiting, drowsiness, muscular weakness and lack of coordination may be early signs of lithium toxicity, and can occur at lithium levels below 2.0 mEq/L. At higher levels, giddiness, ataxia, blurred vision, tinnitus, and a large output of dilute urine may be seen. Serum lithium levels above 3.0 mEq/L may produce a complex clinical picture involving multiple organs and organ systems. Serum lithium levels should not be permitted to exceed 2.0 mEq/L during the acute treatment phase.

Cases of pseudotumor cerebri (increased intracranial pressure and papilledema) have been reported with lithium use. If undetected, this condition may result in enlargement of the blind spot, construction of visual fields and eventual blindness due to optic atrophy. Lithium should be discontinued, if clinically possible, if this syndrome occurs.

Euthyroid goiter and/or hypothyroidism (including myxedema) accompanied by lower T3 and T4. Iodine uptake may be elevated. (See PRECAUTIONS.) Paradoxically, rare cases of hyperthyroidism have been reported.

Diffuse slowing, widening of the frequency spectrum, potentiation and disorganization of background rhythm.

Miscellaneous reactions unrelated to dosage are:

A single report has been received of the development of painful discoloration of fingers and toes and coldness of the extremities within one day of the starting of treatment of lithium. The mechanism through which these symptoms (resembling Raynaud's Syndrome) developed is not known. Recovery followed discontinuance.

The toxic levels for lithium are close to the therapeutic levels. It is therefore important that patients and their families be cautioned to watch for early toxic symptoms and to discontinue the drug and inform the physician should they occur. Toxic symptoms are listed in detail under ADVERSE REACTIONS.

No specific antidote for lithium poisoning is known. Early symptoms of lithium toxicity can usually be treated by reduction or cessation of dosage of the drug and resumption of the treatment at a lower dose after 24 to 48 hours. In severe cases of lithium poisoning, the first and foremost goal of treatment consists of elimination of this ion from the patient.

Treatment is essentially the same as that used in barbiturate poisoning: 1) gastric lavage, 2) correction of fluid and electrolyte imbalance and 3) regulation of kidney functioning. Urea, mannitol and aminophylline all produce significant increases in lithium excretion. Hemodialysis is an effective and rapid means of removing the ion from the severely toxic patient. Infection prophylaxis, regular chest X-rays, and preservation of adequate respiration are essential.

Optimal patient response to Lithium Carbonate usually can be established and maintained with 600 mg t.i.d. Such doses will normally produce an effective serum lithium level ranging between 1 and 1.5 mEq/L. Dosage must be individualized according to serum levels and clinical response. Regular monitoring of the patient's clinical state and serum lithium levels is necessary. Serum levels should be determined twice per week during the acute phase, and until the serum level and clinical condition of the patient have been stabilized.

The desirable serum lithium levels are 0.6 to 1.2 mEq/L. Dosage will vary from one individual to another, but usually 300 mg of Lithium Carbonate t.i.d. or q.i.d. will maintain this level. Serum lithium levels in uncomplicated cases receiving maintenance therapy during remission should be monitored at least every two months.

Lithium Carbonate Capsules USP, 300 mg are supplied as No. 1 Grey/Yellow Opaque Hard Gelatin Capsules Printed “West-ward 3189” in Black Ink and are available in: 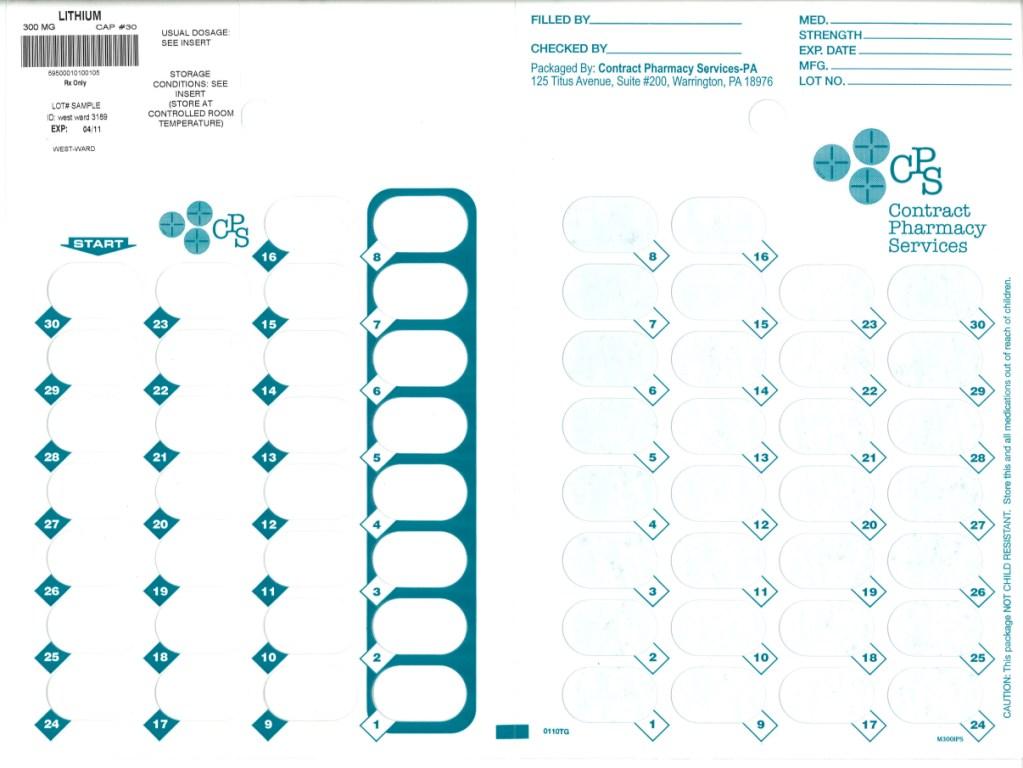