HydrALAZINE Hydrochloride Tablets USP, is an antihypertensive, for oral administration. Its chemical name is 1-hydrazinophthalazine monohydrochloride, and its structural formula is: 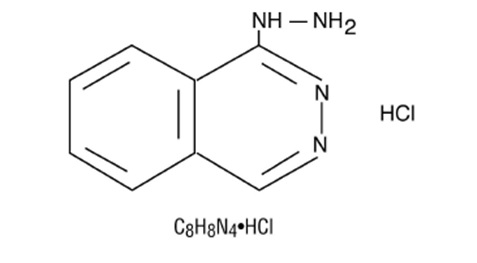 Although the precise mechanism of action of hydrALAZINE is not fully understood, the major effects are on the cardiovascular system. HydrALAZINE apparently lowers blood pressure by exerting a peripheral vasodilating effect through a direct relaxation of vascular smooth muscle.
HydrALAZINE, by altering cellular calcium metabolism, interferes with the calcium movements within the vascular smooth muscle that are responsible for initiating or maintaining the contractile state.

The “hyperdynamic” circulation caused by hydrALAZINE may accentuate specific cardiovascular inadequacies. For example, hydrALAZINE may increase pulmonary artery pressure in patients with mitral valvular disease. The drug may reduce the pressor responses to epinephrine. Postural hypotension may result from hydrALAZINE but is less common than with ganglionic blocking agents. It should be used with caution in patients with cerebral vascular accidents.

In a lifetime study in Swiss albino mice, there was a statistically significant increase in the incidence of lung tumors (adenomas and adenocarcinomas) of both male and female mice given hydrALAZINE continuously in their drinking water at a dosage of about 250 mg/kg per day (about 80 times the maximum recommended human dose). In a 2-year carcinogenicity study of rats given hydrALAZINE by gavage at dose levels of 15, 30, and 60 mg/kg/day (approximately 5 to 20 times the recommended human daily dosage), microscopic examination of the liver revealed a small, but statistically significant, increase in benign neoplastic nodules in male and female rats from the high-dose group and in female rats from the intermediate-dose group. Benign interstitial cell tumors of the testes were also significantly increased in male rats from the high-dose group. The tumors observed are common in aged rats and a significantly increased incidence was not observed until 18 months of treatment. HydrALAZINE was shown to be mutagenic in bacterial systems (Gene Mutation and DNA Repair) and in one of two rats and one rabbit hepatocytein vitro DNA repair studies. Additional in vivo and in vitro studies using lymphoma cells, germinal cells, and fibroblasts from mice, bone marrow cells from chinese hamsters and fibroblasts from human cell lines did not demonstrate any mutagenic potential for hydrALAZINE.

The incidence of toxic reactions, particularly the L.E. cell syndrome, is high in the group of patients receiving large doses of hydrALAZINE hydrochloride tablets.

In a few resistant patients, up to 300 mg of hydrALAZINE hydrochloride tablets daily may be required for a significant antihypertensive effect. In such cases, a lower dosage of hydrALAZINE hydrochloride tablets combined with a thiazide and/or reserpine or a beta blocker may be considered. However, when combining therapy, individual titration is essential to ensure the lowest possible therapeutic dose of each drug. 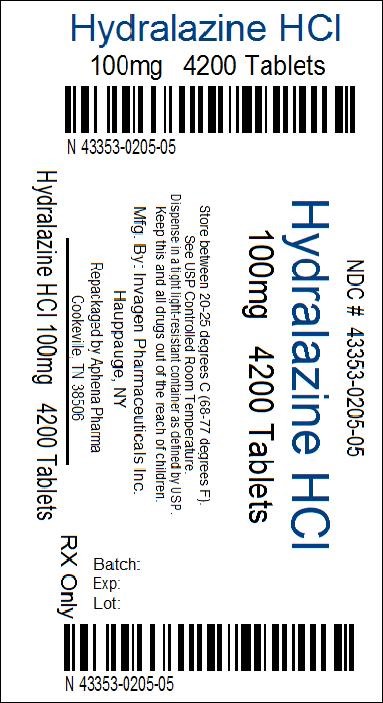