Caffeine (anhydrous) USP, a central nervous system stimulant, is an odorless white crystalline powder or granules, with a bitter taste. It is sparingly soluble in water and ethanol at room temperature. The chemical name of caffeine is 3,7-dihydro-1,3,7-trimethyl-1H-purine-2,6-dione. In the presence of citric acid it forms caffeine citrate salt in solution. The structural formula and molecular weight of caffeine citrate follows. 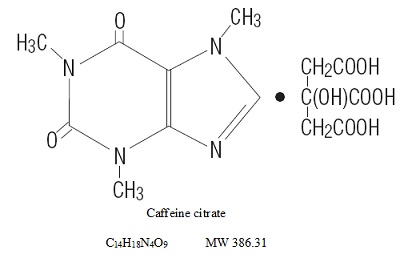 In young infants, the elimination of caffeine is much slower than that in adults due to immature hepatic and/or renal function. Mean half-life (T1/2) and fraction excreted unchanged in urine (Ae) of caffeine in infants have been shown to be inversely related to gestational/postconceptual age. In neonates, the T1/2 is approximately 3 to 4 days and the Ae is approximately 86% (within 6 days). By 9 months of age, the metabolism of caffeine approximates that seen in adults (T1/2 = 5 hours and Ae = 1%).


One multicenter, randomized, double-blind trial compared caffeine citrate to placebo in eighty-five (85) preterm infants (gestational age 28 to <33 weeks) with apnea of prematurity. Apnea of prematurity was defined as having at least 6 apnea episodes of greater than 20 seconds duration in a 24-hour period with no other identifiable cause of apnea. A 1 mL/kg (20 mg/kg caffeine citrate providing 10 mg/kg as caffeine base) loading dose of caffeine citrate was administered intravenously, followed by a 0.25 mL/kg (5 mg/kg caffeine citrate providing 2.5 mg/kg of caffeine base) daily maintenance dose administered either intravenously or orally (generally through a feeding tube). The duration of treatment in this study was limited to 10 to 12 days. The protocol allowed infants to be “rescued” with open-label caffeine citrate treatment if their apnea remained uncontrolled during the double-blind phase of the trial.

1 Of 85 patients who received drug, 3 were not included in the efficacy analysis because they had <6 apnea episodes/24 hours at baseline.


Caffeine citrate injection, USP is indicated for the treatment of apnea of prematurity.


Caffeine citrate injection is contraindicated in patients who have demonstrated hypersensitivity to any of its components.


Although no cases of cardiac toxicity were reported in the placebo-controlled trial, caffeine has been shown to increase heart rate, left ventricular output, and stroke volume in published studies. Therefore, caffeine citrate should be used with caution in infants with cardiovascular disease.


Cytochrome P450 1A2 (CYP1A2) is known to be the major enzyme involved in the metabolism of caffeine. Therefore, caffeine has the potential to interact with drugs that are substrates for CYP1A2, inhibit CYP1A2, or induce CYP1A2.

A published randomized, placebo-controlled, clinical trial in premature infants with birthweights of 500 to 1,250 grams studied the safety of caffeine citrate in apnea of prematurity (NCT00182312). This trial randomized approximately 2,000 premature infants with a mean gestational age of 27 weeks at birth. The median duration of caffeine therapy was 37 days. Prior to discharge home, death, ultrasonographic signs of brain injury, and necrotizing enterocolitis were not more common in the caffeine citrate group compared to the placebo. At follow up at both 18 months and 5 years corrected age, death was not more common in the caffeine citrate treated group compared to placebo, nor did caffeine citrate use adversely affect neurodevelopmental outcomes.

To test for drug compatibility with common intravenous solutions or medications, 20 mL of caffeine citrate injection, USP were combined with 20 mL of a solution or medication, with the exception of an Intralipid® admixture, which was combined as 80 mL/80 mL. The physical appearance of the combined solutions was evaluated for precipitation. The admixtures were mixed for 10 minutes and then assayed for caffeine. The admixtures were then continually mixed for 24 hours, with further sampling for caffeine assays at 2, 4, 8, and 24 hours.

Based on this testing, caffeine citrate injection USP, 60 mg/3 mL is chemically stable for 24 hours at room temperature when combined with the following test products.

Caffeine citrate injection, USP is available as a clear, colorless, sterile, non-pyrogenic, preservative-free, aqueous solution in 5 mL colorless glass vial. The vials are sealed with a gray rubber stopper and an aluminum overseal with a white flip-off printed with “FOR INTRAVENOUS USE ONLY” in red.


The vial stopper is not made with natural rubber latex.


Intralipid® is a registered trademark of Fresenius Kabi AB.


Aminosyn® is a registered trademark of Hospira, Inc. 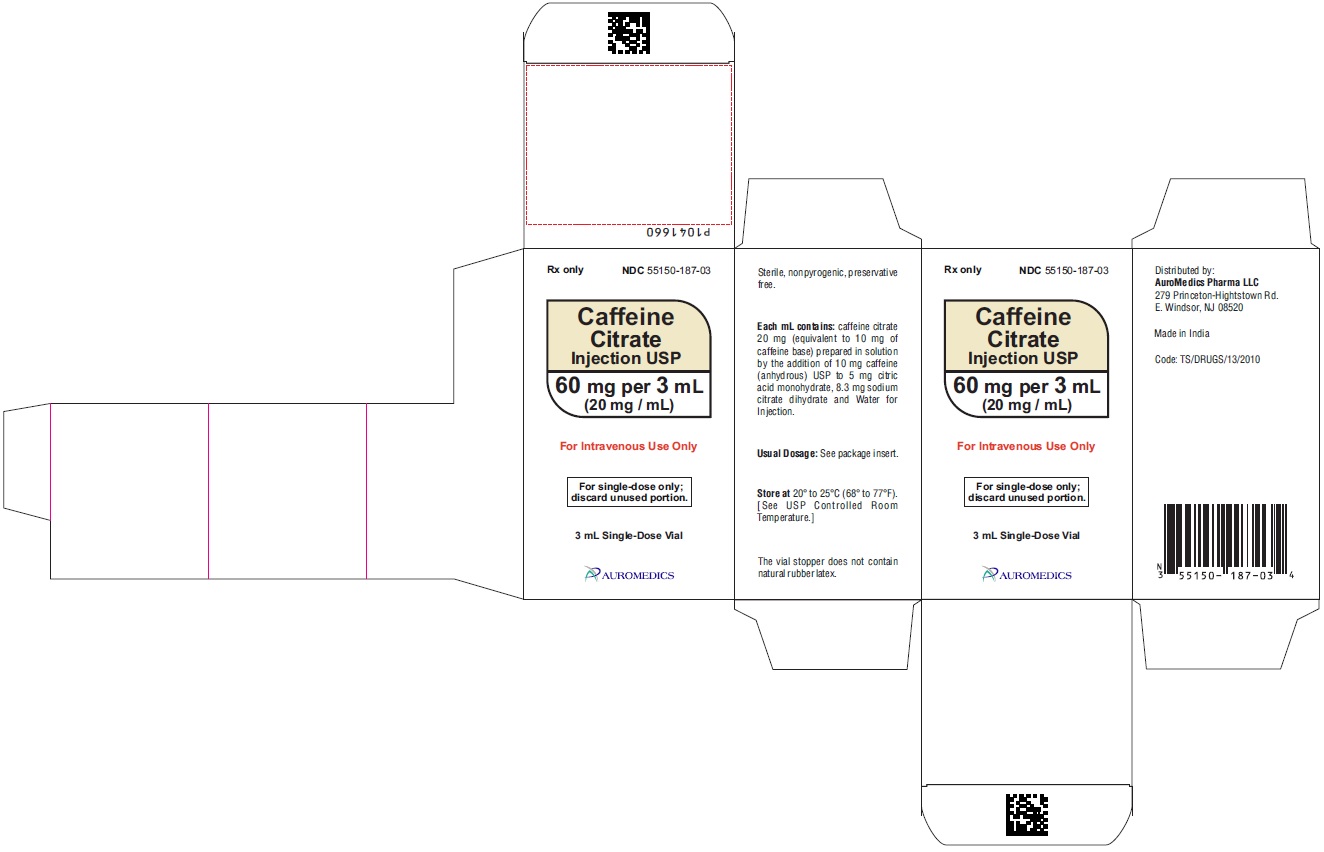