Each tablet, for oral administration, contains:


Butalbital (5-allyl-5-isobutylbarbituric acid), a white, odorless, crystalline powder having a slightly bitter taste, is a short to intermediate-acting barbiturate. It has the following structural formula:

Caffeine (1,3,7,-trimethylxanthine), a bitter, white powder or white-glistening needles, is a central nervous system stimulant. It has the following structural formula:

Pharmacokinetics: The behavior of the individual components is described below.

Caffeine: Like most xanthines, caffeine is rapidly absorbed and distributed in all body tissues and fluids, including the CNS, fetal tissues, and breast milk.

Caffeine is cleared through metabolism and excretion in the urine. The plasma half-life is about 3 hours. Hepatic biotransformation prior to excretion, results in about equal amounts of 1-methylxanthine and 1-methyluric acid. Of the 70% of the dose that is recovered in the urine, only 3% is unchanged drug.

General: Butalbital, acetaminophen and caffeine tablets should be prescribed with caution in certain special-risk patients, such as the elderly or debilitated, and those with severe impairment of renal or hepatic function, or acute abdominal conditions.

Information for Patients: This product may impair mental and/or physical abilities required for the performance of potentially hazardous tasks such as driving a car or operating machinery. Such tasks should be avoided while taking this product.

Laboratory Tests: In patients with severe hepatic or renal disease, effects of therapy should be monitored with serial liver and/or renal function tests.

Drug Interactions: The CNS effects of butalbital may be enhanced by monoamine oxidase (MAO) inhibitors.

Carcinogenesis, Mutagenesis, Impairment of Fertility: No adequate studies have been conducted in animals to determine whether acetaminophen or butalbital have a potential for carcinogenesis, mutagenesis or impairment of fertility.

Pregnancy:Teratogenic Effects: Pregnancy Category C: Animal reproduction studies have not been conducted with this combination product. It is also not known whether butalbital, acetaminophen and caffeine can cause fetal harm when administered to a pregnant woman or can affect reproduction capacity. This product should be given to a pregnant woman only when clearly needed.

Nonteratogenic Effects: Withdrawal seizures were reported in a two-day-old male infant whose mother had taken a butalbital-containing drug during the last two months of pregnancy. Butalbital was found in the infant's serum. The infant was given phenobarbital 5 mg/kg, which was tapered without further seizure or other withdrawal symptoms.

Nursing Mothers: Caffeine, barbiturates and acetaminophen are excreted in breast milk in small amounts, but the significance of their effects on nursing infants is not known. Because of potential for serious adverse reactions in nursing infants from butalbital, acetaminophen and caffeine, a decision should be made whether to discontinue nursing or to discontinue the drug, taking into account the importance of the drug to the mother.

Pediatric Use: Safety and effectiveness in children below the age of 12 have not been established.

Geriatric Use: Clinical studies of butalbital, acetaminophen and caffeine tablets did not include sufficient numbers of subjects aged 65 and over to determine whether they respond differently from younger subjects. Other reported clinical experience has not identified differences in responses between the elderly and younger patients. In general, dose selection for an elderly patient should be cautious, usually starting at the low end of the dosing range, reflecting the greater frequency of decreased hepatic, renal, or cardiac function, and of concomitant disease or other drug therapy.

Barbiturates may be habit-forming: Tolerance, psychological dependence, and physical dependence may occur especially following prolonged use of high doses of barbiturates. The average daily dose for the barbiturate addict is usually about 1500 mg. As tolerance to barbiturates develops, the amount needed to maintain the same level of intoxication increases; tolerance to a fatal dosage, however, does not increase more than two-fold. As this occurs, the margin between an intoxication dosage and fatal dosage becomes smaller. The lethal dose of a barbiturate is far less if alcohol is also ingested. Major withdrawal symptoms (convulsions and delirium) may occur within 16 hours and last up to 5 days after abrupt cessation of these drugs. Intensity of withdrawal symptoms gradually declines over a period of approximately 15 days. Treatment of barbiturate dependence consists of cautious and gradual withdrawal of the drug. Barbiturate-dependent patients can be withdrawn by using a number of different withdrawal regimens. One method involves initiating treatment at the patient's regular dosage level and gradually decreasing the daily dosage as tolerated by the patient.

In acetaminophen overdosage: dose-dependent, potentially fatal hepatic necrosis is the most serious adverse effect. Renal tubular necroses, hypoglycemic coma and thrombocytopenia may also occur. Early symptoms following a potentially hepatotoxic overdose may include: nausea, vomiting, diaphoresis and general malaise. Clinical and laboratory evidence of hepatic toxicity may not be apparent until 48 to 72 hours post-ingestion. In adults hepatic toxicity has rarely been reported with acute overdoses of less than 10 grams, or fatalities with less than 15 grams.

Treatment: A single or multiple overdose with this combination product is a potentially lethal polydrug overdose, and consultation with a regional poison control center is recommended.

Immediate treatment includes support of cardiorespiratory function and measures to reduce drug absorption. Vomiting should be induced mechanically, or with syrup of ipecac, if the patient is alert (adequate pharyngeal and laryngeal reflexes). Oral activated charcoal (1 g/kg) should follow gastric emptying. The first dose should be accompanied by an appropriate cathartic. If repeated doses are used, the cathartic might be included with alternate doses as required. Hypotension is usually hypovolemic and should respond to fluids. Pressors should be avoided. A cuffed endotracheal tube should be inserted before gastric lavage of the unconscious patient and, when necessary, to provide assisted respiration. If renal function is normal, forced diuresis may aid in the elimination of the barbiturate. Alkalinization of the urine increases renal excretion of some barbiturates, especially phenobarbital.


Toxic Doses (for adults):
NOTE: The information included in this subsection with regard to the number of tablets which constitute a toxic dose is product specific.

Oral: One or two tablets every four hours. Total daily dosage should not exceed 6 tablets.

Butalbital, Acetaminophen and Caffeine Tablets 50 mg/325 mg/40 mg are blue, round, unscored tablets; imprinted “West-ward 787”. They are available in: 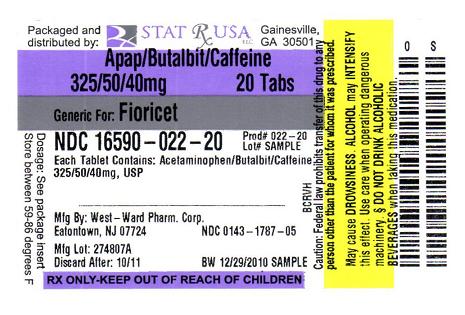