Mechanism of Action: Midodrine forms an active metabolite, desglymidodrine, that is an alpha1-agonist, and exerts its actions via activation of the alpha-adrenergic receptors of the arteriolar and venous vasculature, producing an increase in vascular tone and elevation of blood pressure. Desglymidodrine does not stimulate cardiac beta-adrenergic receptors. Desglymidodrine diffuses poorly across the blood-brain barrier, and is therefore not associated with effects on the central nervous system.

Administration of midodrine results in a rise in standing, sitting, and supine systolic and diastolic blood pressure in patients with orthostatic hypotension of various etiologies. Standing systolic blood pressure is elevated by approximately 15 to 30 mmHg at 1 hour after a 10 mg dose of midodrine, with some effect persisting for 2 to 3 hours. Midodrine has no clinically significant effect on standing or supine pulse rates in patients with autonomic failure.

Midodrine has been studied in 3 principal controlled trials, one of 3-weeks duration and 2 of 1 to 2 days duration. All studies were randomized, double-blind and parallel-design trials in patients with orthostatic hypotension of any etiology and supine-to-standing fall of systolic blood pressure of at least 15 mmHg accompanied by at least moderate dizziness/lightheadedness. Patients with pre-existing sustained supine hypertension above 180/110 mmHg were routinely excluded. In a 3-week study in 170 patients, most previously untreated with midodrine, the midodrine-treated patients (10 mg t.i.d., with the last dose not later than 6 P.M.) had significantly higher (by about 20 mmHg) 1-minute standing systolic pressure 1 hour after dosing (blood pressures were not measured at other times) for all 3 weeks. After week 1, midodrine-treated patients had small improvements in dizziness/lightheadedness/unsteadiness scores and global evaluations, but these effects were made difficult to interpret by a high early drop-out rate (about 25%vs 5% on placebo). Supine and sitting blood pressure rose 16/8 and 20/10 mmHg, respectively, on average.

In a 2-day study, after open-label midodrine, known midodrine responders received midodrine 10 mg or placebo at 0, 3, and 6 hours. One-minute standing systolic blood pressures were increased 1 hour after each dose by about 15 mmHg and 3 hours after each dose by about 12mmHg; 3-minute standing pressures were increased also at 1, but not 3, hours after dosing. There were increases in standing time seen intermittently 1 hour after dosing, but not at 3 hours.

A study with 16 patients undergoing hemodialysis demonstrated that midodrine is removed by dialysis.


After initiation of treatment, midodrine hydrochloride tabletsshould be continued only for patients who report significant symptomatic improvement.

Supine Hypertension: The most potentially serious adverse reaction associated with midodrine therapy is marked elevation of supine arterial blood pressure (supine hypertension). Systolic pressure of about 200 mmHg were seen overall in about 13.4% of patients given 10 mg of midodrine. Systolic elevations of this degree were most likely to be observed in patients with relatively elevated pre-treatment systolic blood pressures (mean 170 mmHg). There is no experience in patients with initial supine systolic pressure above 180 mmHg, as those patients were excluded from the clinical trials. Use of midodrine in such patients is not recommended. Sitting blood pressures were also elevated by midodrine therapy. It is essential to monitor supine and sitting blood pressures in patients maintained on midodrine. Uncontrolled hypertension increases the risk of cardiovascular events, particularly stroke.

A slight slowing of the heart rate may occur after administration of midodrine, primarily due to vagal reflex. Caution should be exercised when midodrine is used concomitantly with cardiac glycosides (such as digitalis), psychopharmacologic agents, beta blockers or other agents that directly or indirectly reduce heart rate. Patients who experience any signs or symptoms suggesting bradycardia (pulse slowing, increased dizziness, syncope, cardiac awareness) should be advised to discontinue midodrine and should be re-evaluated.

Midodrine use has not been studied in patients with renal impairment. Because desglymidodrine is eliminated via the kidneys, and higher blood levels would be expected in such patients, midodrine  should be used with caution in patients with renal impairment, with a starting dose of 2.5 mg (see DOSAGE AND ADMINISTRATION). Renal function should be assessed prior to initial use of midodrine.

Patients should be told that certain agents in over-the-counter products, such as cold remedies and diet aids, can elevate blood pressure, and therefore, should be used cautiously with midodrine, as they may enhance or potentiate the pressor effects of midodrine  (see Drug Interactions). Patients should also be made aware of the possibility of supine hypertension. They should be told to avoid taking their dose if they are to be supine for any length of time, i.e., they should take their last daily dose of midodrine  3 to 4 hours before bedtime to minimize nighttime supine hypertension.

When administered concomitantly with midodrine, cardiac glycosides may enhance or precipitate bradycardia, A.V. block or arrhythmia.

It appears possible, although there is no supporting experimental evidence, that the high renal clearance of desyglymidodrine (a base) is due to active tubular secretion by the base-secreting system also responsible for the secretionof such drugs as metformin, cimetidine, ranitidine, procainamide, triamterene, flecainide, and quinidine. Thus there may be a potential for drug-drug interactions with these drugs.

Long-term studies have been conducted in rats and mice at dosages 3 to 4 times the maximum recommended daily human dose on a mg/m2 basis, with no indication of carcinogenic effects related to midodrine. Studies investigating the mutagenic potential of midodrine revealed no evidence of mutagenicity. Other than the dominant lethal assay in male mice, where no impairment of fertility was observed, there have been no studies on the effects of midodrine on fertility.

Midodrine increased the rate of embryo resorption, reduced fetal body weight in rats and rabbits, and decreased fetal survival in rabbits when given in doses 13 (rat) and 7 (rabbit) times the maximum human dose based on body surface area (mg/m2). There are no adequate and well-controlled studies in pregnant women. Midodrine should be used during pregnancy only if the potential benefit justifies the potential risk to the fetus. No teratogenic effects have been observed in studies in rats and rabbits.

4 Includes patients who experienced an increase in supine hypertension

The recommended dose of midodrine hydrochloride tablet is 10 mg, 3 times daily. Dosing should take place during the daytime hours when the patient needs to be upright, pursuing the activities of daily living. A suggested dosing schedule of approximately 4-hour intervals is as follows: shortly before, or upon arising in the morning, midday and late afternoon (not later than 6 P.M.). Doses may be given in 3-hour intervals, if required, to control symptoms, but not more frequently. Single doses as high as 20 mg have been given to patients, but severe and persistent systolic supine hypertension occurs at a high rate (about 45%) at this dose. In order to reduce the potential for supine hypertension during sleep, midodrine hydrochloride tabletsshould not be given after the evening meal or less than 4 hours before bedtime. Total daily doses greater than 30 mg have been tolerated by some patients, but their safety and usefulness have not been studied systematically or established. Because of the risk of supine hypertension, midodrine hydrochloride tabletsshould be continued only in patients who appear to attain symptomatic improvement during initial treatment.

The supine and standing blood pressure should be monitored regularly, and the administration of midodrine hydrochloride tabletsshould be stopped if supine blood pressure increases excessively.


Midodrine hydrochloride tablets USP, 2.5 mg having functional scoring   are white to off-white round, flat-faced, beveled edge, scored tablets debossed with ‘L’ above the score and plain on below the score on one side of the tablet and ‘584’ on the other side.


Midodrine hydrochloride tablets USP, 5 mg having functional scoring   are white to off-white round, flat-faced, beveled edge, scored tablets debossed with ‘L’ above the score and plain on below the score on one side of the tablet and ‘585’ on the other side.


Midodrine hydrochloride tablets USP, 10 mg having functional scoring   are white to off-white round, flat-faced, beveled edge, scored tablets debossed with ‘L’ above the score and plain on below the score on one side of the tablet and ‘586’ on the other side. 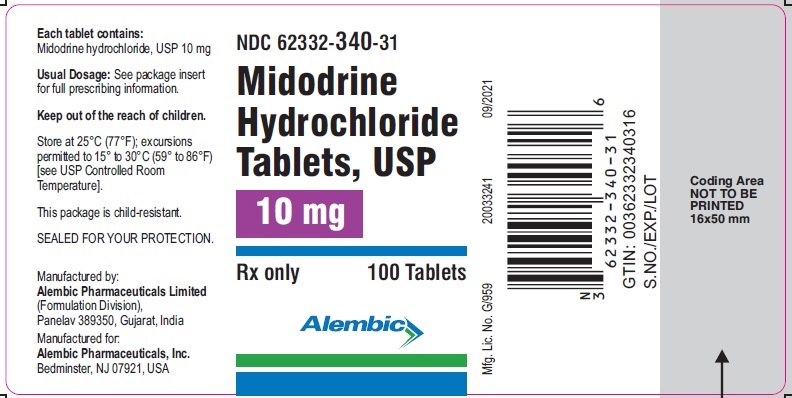