The mechanism of action of ARESTIN as an adjunct to scaling and root planing procedures for reduction of pocket depth in patients with adult periodontitis is unknown.

Minocycline, a member of the tetracycline class of antibiotics, has a broad spectrum of activity. It is bacteriostatic and exerts its antimicrobial activity by inhibiting protein synthesis. In vitro susceptibility testing has shown that the organisms Porphyromonas gingivalis, Prevotella intermedia, Fusobacterium nucleatum, Eikenella corrodens, and Actinobacillus actinomycetemcomitans, which are associated with periodontal disease, are susceptible to minocycline at concentrations of ≤8 mcg/mL; qualitative and quantitative changes in plaque microorganisms have not been demonstrated in subjects with periodontitis, using this product.

The emergence of minocycline-resistant bacteria in single-site plaque samples was studied in subjects before and after treatment with ARESTIN at 2 centers. There was a slight increase in the numbers of minocycline-resistant bacteria at the end of the 9-month study period; however, the number of subjects studied was small and the clinical significance of these findings is unknown.

The emergence of minocycline-resistant bacteria and changes in the presence of Candida albicans and Staphylococcus aureus in the gastrointestinal tract were studied in subjects treated with ARESTIN in one phase 3 study. No changes in the presence of minocycline-resistant bacteria or Candida albicans or Staphylococcus aureus were seen at the end of the 56-day study period.

In a pharmacokinetic study, 18 subjects (10 men and 8 women) with moderate to advanced chronic periodontitis were treated with a mean dose of 46.2 mg (25 to 112 unit doses) of ARESTIN. After fasting for at least 10 hours, subjects received subgingival application of ARESTIN (1 mg per treatment site) following scaling and root planing at a minimum of 30 sites on at least 8 teeth. Investigational drug was administered to all eligible sites ≥5 mm in probing depth. Mean dose normalized saliva AUC and Cmax were found to be approximately 125 and 1000 times higher than those of serum parameters, respectively.

In 2 well-controlled, multicenter, investigator-blind, vehicle-controlled, parallel-design studies (3 arms), 748 subjects (study OPI-103A=368, study OPI-103B=380) with generalized moderate to advanced adult periodontitis characterized by a mean probing depth of 5.90 and 5.81 mm, respectively, were enrolled. Subjects received 1 of 3 treatments: (1) scaling and root planing (SRP), (2) SRP + vehicle (bioresorbable polymer, PGLA), and (3) SRP + ARESTIN. To qualify for the study, subjects were required to have 4 teeth with periodontal pockets of 6 to 9 mm that bled on probing. However, treatment was administered to all sites with mean probing depths of 5 mm or greater. Subjects studied were in good general health. Subjects with poor glycemic control or active infectious diseases were excluded from the studies. Retreatment occurred at 3 and 6 months after initial treatment, and any new site with pocket depth ≥5 mm also received treatment. Subjects treated with ARESTIN were found to have statistically significantly reduced probing pocket depth compared with those treated with SRP alone or SRP + vehicle at 9 months after initial treatment, as shown in Table 1.

SRP + ARESTIN resulted in a greater percentage of pockets showing a change of PD ≥2 mm and ≥3 mm compared to SRP alone at 9 months, as shown in Table 2.

In both studies, the following patient subgroups were prospectively analyzed: smokers, subjects over and under 50 years of age, and subjects with a previous history of cardiovascular disease. The results of the combined studies are presented in Table 3.

The combined data from these 2 studies also show that for pockets 5 mm to 7 mm at baseline, greater reductions in pocket depth occurred in pockets that were deeper at baseline.

ARESTIN should not be used in any patient who has a known sensitivity to minocycline or tetracyclines.

THE USE OF DRUGS OF THE TETRACYCLINE CLASS DURING TOOTH DEVELOPMENT (LAST HALF OF PREGNANCY, INFANCY, AND CHILDHOOD TO THE AGE OF 8 YEARS) MAY CAUSE PERMANENT DISCOLORATION OF THE TEETH (YELLOW-GRAY BROWN). This adverse reaction is more common during long-term use of the drugs, but has been observed following repeated short-term courses. Enamel hypoplasia has also been reported. TETRACYCLINE DRUGS, THEREFORE, SHOULD NOT BE USED IN THIS AGE GROUP, OR IN PREGNANT OR NURSING WOMEN, UNLESS THE POTENTIAL BENEFITS ARE CONSIDERED TO OUTWEIGH THE POTENTIAL RISKS. Results of animal studies indicate that tetracyclines cross the placenta, are found in fetal tissues, and can have toxic effects on the developing fetus (often related to retardation of skeletal development). Evidence of embryotoxicity has also been noted in animals treated early in pregnancy. If any tetracyclines are used during pregnancy, or if the patient becomes pregnant while taking this drug, the patient should be apprised of the potential hazard to the fetus. Photosensitivity manifested by an exaggerated sunburn reaction has been observed in some individuals taking tetracyclines. Patients apt to be exposed to direct sunlight or ultraviolet light should be advised that this reaction can occur with tetracycline drugs, and treatment should be discontinued at the first evidence of skin erythema.

The following adverse events have been reported with minocycline products when taken orally. Hypersensitivity reactions and hypersensitivity syndrome that included, but were not limited to anaphylaxis, anaphylactoid reaction, angioneurotic edema, urticaria, rash, eosinophilia, and one or more of the following: hepatitis, pneumonitis, nephritis, myocarditis, and pericarditis may be present. Swelling of the face, pruritus, fever and lymphadenopathy have been reported with the use of ARESTIN. Some of these reactions were serious. Post-marketing cases of anaphylaxis and serious skin reactions such as Stevens-Johnson syndrome and erythema multiforme have been reported with oral minocycline.

Tetracyclines, including oral minocycline, have been associated with the development of autoimmune syndromes including a lupus-like syndrome manifested by arthralgia, myalgia, rash, and swelling. Sporadic cases of serum sickness-like reaction have presented shortly after oral minocycline use, manifested by fever, rash, arthralgia, lymphadenopathy and malaise. In symptomatic patients, liver function tests, ANA, CBC, and other appropriate tests should be performed to evaluate the patients. No further treatment with ARESTIN should be administered to the patient.

The use of ARESTIN in an acutely abscessed periodontal pocket has not been studied and is not recommended.

While no overgrowth by opportunistic microorganisms, such as yeast, was noted during clinical studies, as with other antimicrobials, the use of ARESTIN may result in overgrowth of non-susceptible microorganisms including fungi. The effects of treatment for greater than 6 months have not been studied.

If superinfection is suspected, appropriate measures should be taken.

ARESTIN has not been clinically tested in pregnant women.

ARESTIN has not been clinically tested for use in the regeneration of alveolar bone, either in preparation for or in conjunction with the placement of endosseous (dental) implants or in the treatment of failing implants.

After treatment, patients should avoid chewing hard, crunchy, or sticky foods (i.e., carrots, taffy, and gum) with the treated teeth for 1 week, as well as avoid touching treated areas. Patients should also postpone the use of interproximal cleaning devices around the treated sites for 10 days after administration of ARESTIN. Patients should be advised that although some mild to moderate sensitivity is expected during the first week after SRP and administration of ARESTIN, they should notify the dentist promptly if pain, swelling, or other problems occur. Patients should be notified to inform the dentist if itching, swelling, rash, papules, reddening, difficulty breathing, or other signs and symptoms of possible hypersensitivity occur.

Dietary administration of minocycline in long-term tumorigenicity studies in rats resulted in evidence of thyroid tumor production. Minocycline has also been found to produce thyroid hyperplasia in rats and dogs. In addition, there has been evidence of oncogenic activity in rats in studies with a related antibiotic, oxytetracycline (i.e., adrenal and pituitary tumors). Minocycline demonstrated no potential to cause genetic toxicity in a battery of assays which included a bacterial reverse mutation assay (Ames test), an in vitro mammalian cell gene mutation test (L5178Y/TK+/- mouse lymphoma assay), an in vitro mammalian chromosome aberration test, and an in vivo micronucleus assay conducted in ICR mice.

The effects of tetracyclines on labor and delivery are unknown.

Tetracyclines are excreted in human milk. Because of the potential for serious adverse reactions in nursing infants from the tetracyclines, a decision should be made whether to discontinue nursing or discontinue the drug, taking into account the importance of the drug to the mother (see WARNINGS).

Since adult periodontitis does not affect children, the safety and effectiveness of ARESTIN in pediatric patients cannot be established.

The most frequently reported non-dental, treatment-emergent adverse events in the 3 multicenter US trials were headache, infection, flu syndrome, and pain.

ARESTIN is provided as a dry powder, packaged in a unit-dose cartridge with a deformable tip (see Figure 1), which is inserted into a spring-loaded cartridge handle mechanism (see Figure 2) to administer the product.

The oral health care professional removes the disposable cartridge from its pouch and connects the cartridge to the handle mechanism (see Figures 3 - 4). ARESTIN is a variable dose product, dependent on the size, shape, and number of pockets being treated. In US clinical trials, up to 122 unit-dose cartridges were used in a single visit and up to 3 treatments, at 3-month intervals, were administered in pockets with pocket depth of 5 mm or greater.

The administration of ARESTIN does not require local anesthesia. Professional subgingival administration is accomplished by inserting the unit-dose cartridge to the base of the periodontal pocket and then pressing the thumb ring in the handle mechanism to expel the powder while gradually withdrawing the tip from the base of the pocket. The handle mechanism should be sterilized between patients. ARESTIN does not have to be removed, as it is bioresorbable, nor is an adhesive or dressing required.

NDC 65976-100-24 12 unit-dose cartridges in 1 tray with desiccant in a heat-sealed, foil-laminated, resealable pouch. There are 2 pouches in each box.

ARESTIN is a trademark of Bausch Health Companies Inc. or its affiliates. 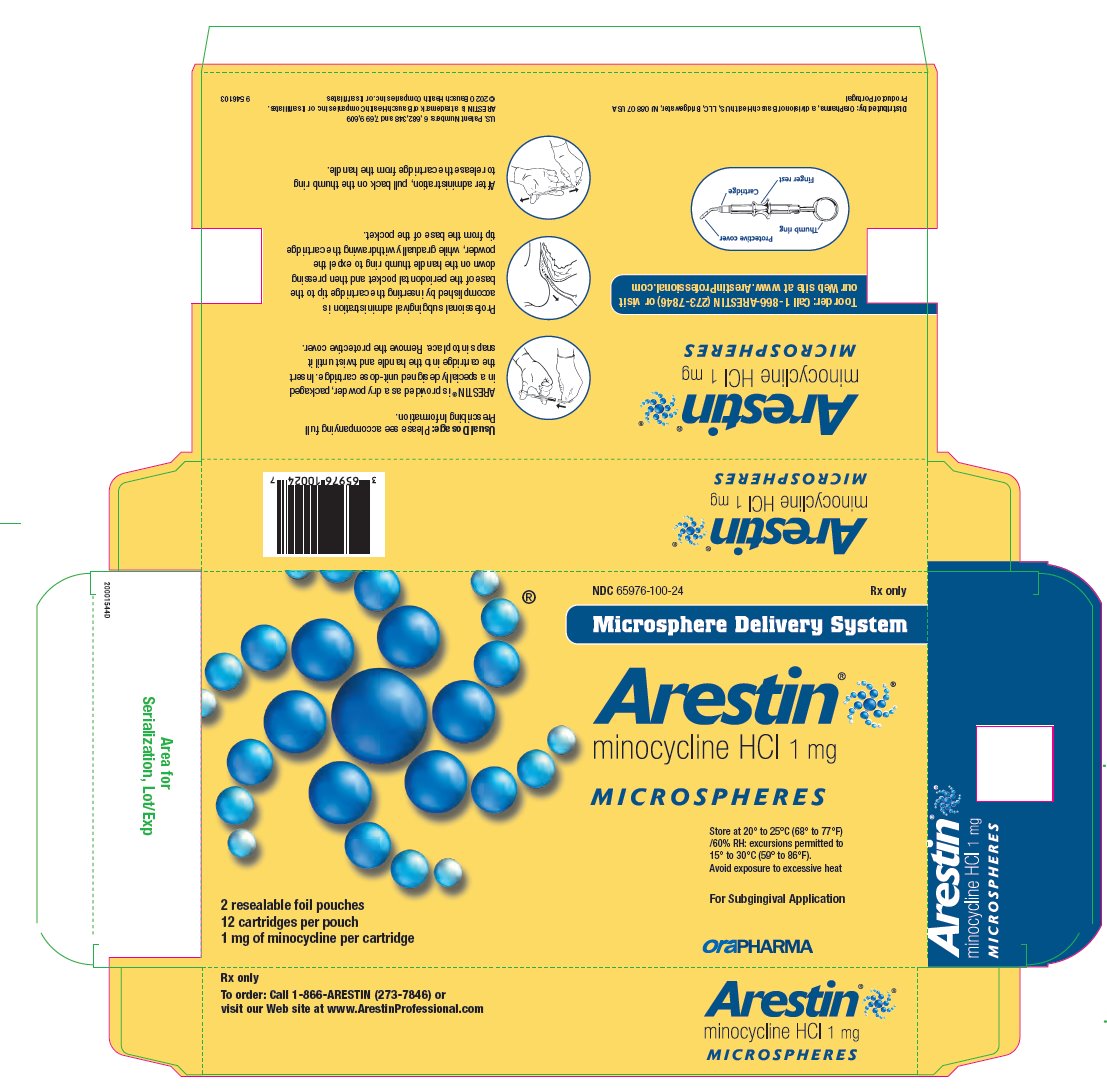 For use only with the patient listed on the prescription label. Rx Pack: Not for dental professional resale