The usual dosage in adult and pediatric patients is 6 grams per day administered orally in divided doses of 3 grams twice daily.  In pediatric patients less than 3 years of age, dosage may be started at 100 mg/kg/day divided in twice daily doses, and then increased weekly by 50 mg/kg increments.
Therapy with Cystadane should be directed by physicians knowledgeable in the management of patients with homocystinuria.  Patient response to Cystadane can be monitored by homocysteine plasma levels.  Dosage in all patients can be gradually increased until plasma total homocysteine is undetectable or present only in small amounts. Response (by homocysteine plasma levels) usually occurs within several days and steady state within a month.  Plasma methionine concentrations should be monitored in patients with CBS deficiency [See Warnings and Precautions (5.1)].

Dosages of up to 20 grams per day have been necessary to control homocysteine levels in some patients.  However, one pharmacokinetic and pharmacodynamic in vitro simulation study indicated minimal benefit from exceeding a twice-daily dosing schedule and a 150 mg/kg/day dosage for Cystadane.

The prescribed amount of Cystadane should be measured with the measuring scoop provided (one level 1.7 mL scoop is equal to 1 gram of betaine anhydrous powder) and then dissolved in 4 to 6 ounces (120 to 180 mL) of water, juice, milk, or formula, or mixed with food for immediate ingestion.

Table 1: Number of Patients with Adverse Reactions to Cystadane by Physician Survey

The following adverse reactions have been identified during post approval use of Cystadane.  Because these reactions are reported voluntarily from a population of uncertain size, it is not always possible to reliably estimate their frequency or establish a causal relationship to drug exposure.

It is not known whether Cystadane is excreted in human milk.  Use only if clearly needed.

The majority of case studies of homocystinuria patients treated with Cystadane have been pediatric patients, including patients ranging in age from 24 days to 17 years [see Clinical Studies (14)].  Children younger than 3 years of age may benefit from dose titration [see Dosage and Administration (2)].

In an acute toxicology study in rats, death occurred frequently at doses equal to or greater than 10 g/kg.

Cystadane (betaine anhydrous for oral solution) is an agent for the treatment of homocystinuria.  It contains no ingredients other than anhydrous betaine. Cystadane is a white, granular, hygroscopic powder, which is diluted in water and administered orally.  The chemical name of betaine anhydrous powder is trimethylglycine.  It has a molecular weight of 117.15.  The structural formula is:

Cystadane acts as a methyl group donor in the remethylation of homocysteine to methionine in patients with homocystinuria.  Cystadane occurs naturally in the body.  It is a metabolite of choline and is present in small amounts in foods such as beets, spinach, cereals, and seafood.

In CBS-deficient patients, large increases in methionine levels over baseline have been observed.  Cystadane has also been demonstrated to increase low plasma methionine and S-adenosylmethionine (SAM) levels in patients with MTHFR deficiency and cbl defect.

Long-term carcinogenicity and fertility studies have not been conducted with Cystadane.  No evidence of genotoxicity was demonstrated in the following tests: metaphase analysis of human lymphocytes; bacterial reverse mutation assay; and mouse micronucleus test.

Cystadane was studied in a double-blind, placebo-controlled, crossover study in 6 patients with CBS deficiency, ages 7 to 32 years at enrollment.  Cystadane was administered at a dosage of 3 grams twice daily, for 12 months. Plasma homocystine levels were significantly reduced (p<0.01) compared to placebo. Plasma methionine levels were variable and not significantly different compared to placebo. No adverse events were reported in any patient.

Cystadane has also been evaluated in observational studies without concurrent controls in patients with homocystinuria due to CBS deficiency, MTHFR deficiency, or cbl defect.A review of 16 case studies and the randomized controlled trial previously described was also conducted, and the data available for each study were summarized; however, no formal statistical analyses were performed. The studies included a total of 78 male and female patients with homocystinuria who were treated with Cystadane. This included 48 patients with CBS deficiency, 13 with MTHFR deficiency, and 11 with cbl defect, ranging in age from 24 days to 53 years. The majority of patients (n=48) received 6 gm/day, 3 patients received less than 6 gm/day, 12 patients received doses from 6 to 15 gm/day, and 5 patients received doses over 15 gm/day. Most patients were treated for more than 3 months (n=57) and 30 patients were treated for 1 year or longer (range 1 month to 11 years). Homocystine is formed nonenzymatically from two molecules of homocysteine, and both have be used to evaluate the effect of Cystadane in patients with homocystinuria. Plasma homocystine or homocysteine levels were reported numerically for 62 patients, and 61 of these patients showed decreases with Cystadane treatment. Homocystine decreased by 83-88% regardless of pre-treatment level, and homocysteine decreased by 71-83%, regardless of the pre-treatment level. Clinical improvement, such as improvement in seizures, or behavioral and cognitive functioning, was reported by the treating physicians in about three-fourths of patients. Many of these patients were also taking other therapies such as vitamin B6 (pyridoxine), vitamin B12 (cobalamin), and folate with variable biochemical responses. In most cases, adding Cystadane resulted in a further reduction of either homocystine or homocysteine.

Patients should be advised of the following information before beginning treatment with Cystadane:

- Measure with the scoop provided.

- Measure the number of scoops as prescribed by their healthcare professional. One level scoop (1.7 mL) is equivalent to 1 gram of betaine anhydrous powder.

- Mix powder with 4 to 6 ounces (120 to 180 mL) of water, juice, milk, or formula until completely dissolved, or mix with food, then ingest mixture immediately.

- Always replace the cap tightly after using, and protect powder from moisture. 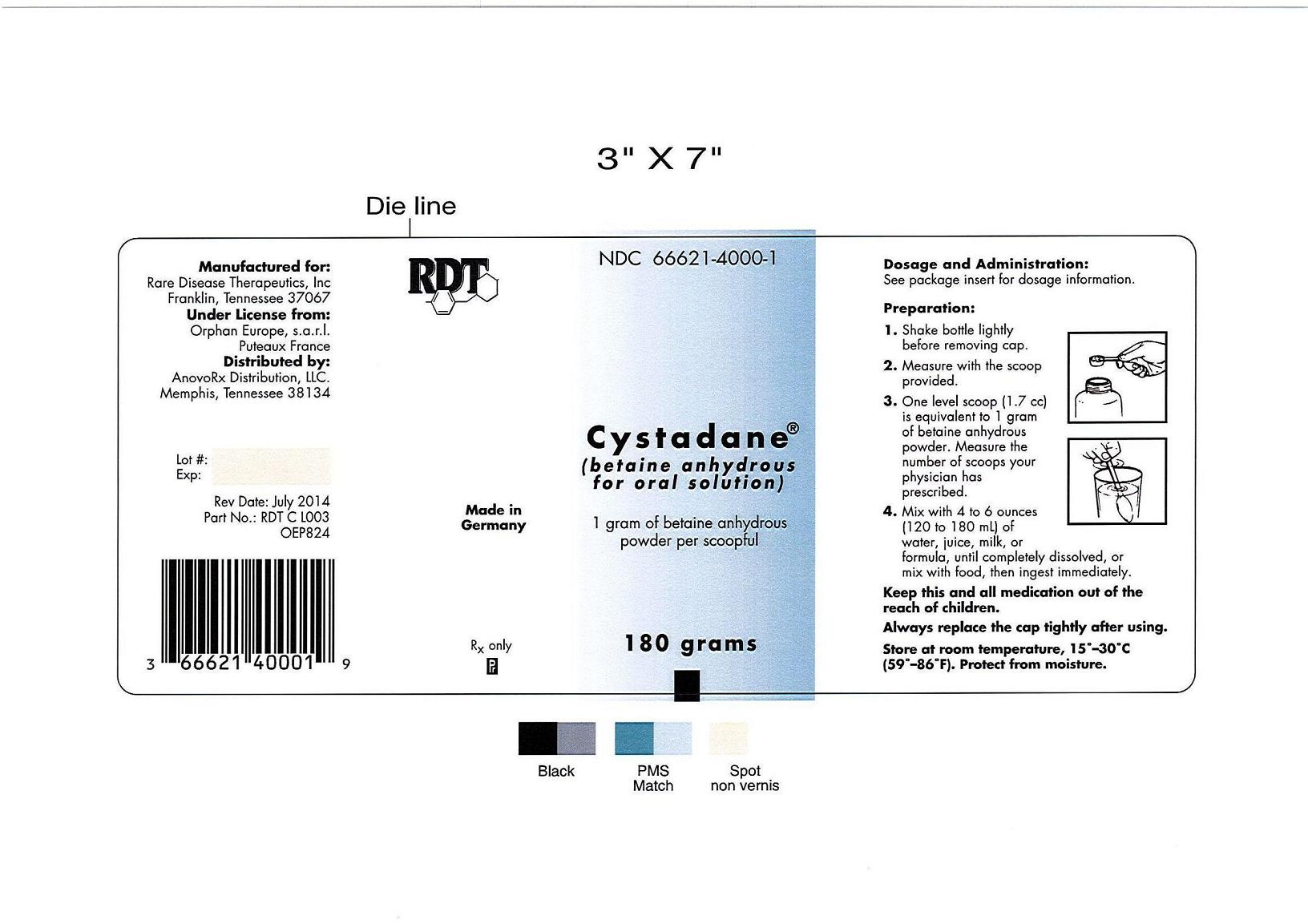