Each Asacol delayed-release tablet for oral administration contains 400 mg of mesalamine, an anti-inflammatory drug. The Asacol delayed-release tablets are coated with acrylic based resin, Eudragit S (methacrylic acid copolymer B, NF), which dissolves at pH 7 or greater, releasing mesalamine in the terminal ileum and beyond for topical anti-inflammatory action in the colon. Mesalamine has the chemical name 5-amino-2-hydroxybenzoic acid; its structural formula is: 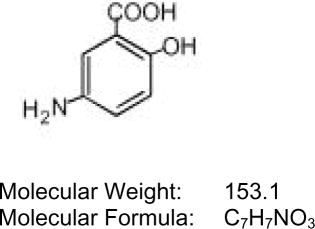 The mechanism of action of mesalamine (and sulfasalazine) is unknown, but appears to be topical rather than systemic. Mucosal production of arachidonic acid (AA) metabolites, both through the cyclooxygenase pathways, i.e., prostanoids, and through the lipoxygenase pathways, i.e., leukotrienes (LTs) and hydroxyeicosatetraenoic acids (HETEs), is increased in patients with chronic inflammatory bowel disease, and it is possible that mesalamine diminishes inflammation by blocking cyclooxygenase and inhibiting prostaglandin (PG) production in the colon.

Pharmacokinetics: Asacol tablets are coated with an acrylic-based resin that delays release of mesalamine until it reaches the terminal ileum and beyond. This has been demonstrated in human studies conducted with radiological and serum markers. Approximately 28% of the mesalamine in Asacol tablets is absorbed after oral ingestion, leaving the remainder available for topical action and excretion in the feces. Absorption of mesalamine is similar in fasted and fed subjects. The absorbed mesalamine is rapidly acetylated in the gut mucosal wall and by the liver. It is excreted mainly by the kidney as N-acetyl-5-aminosalicylic acid.

Mildly to moderately active ulcerative colitis: Two placebo-controlled studies have demonstrated the efficacy of Asacol tablets in patients with mildly to moderately active ulcerative colitis. In one randomized, double-blind, multi-center trial of 158 patients, Asacol doses of 1.6 g/day and 2.4 g/day were compared to placebo. At the dose of 2.4 g/day, Asacol tablets reduced the disease activity, with 21 of 43 (49%) Asacol patients showing improvement in sigmoidoscopic appearance of the bowel compared to 12 of 44 (27%) placebo patients (p = 0.048). In addition, significantly more patients in the Asacol 2.4 g/day group showed improvement in rectal bleeding and stool frequency. The 1.6 g/day dose did not produce consistent evidence of effectiveness.

Maintenance of remission of ulcerative colitis: A 6-month, randomized, double-blind, placebo-controlled, multi-center study involved 264 patients treated with Asacol 0.8 g/day (n = 90), 1.6 g/day (n = 87), or placebo (n = 87). The proportion of patients treated with 0.8 g/day who maintained endoscopic remission was not statistically significant compared to placebo. In the intention to treat (ITT) analysis of all 174 patients treated with Asacol 1.6 g/day or placebo, Asacol maintained endoscopic remission of ulcerative colitis in 61 of 87 (70.1%) of patients, compared to 42 of 87 (48.3%) of placebo recipients (p = 0.005).

Study to assess the effect on male fertility: The effect of Asacol (mesalamine) on sulfasalazine-induced impairment of male fertility was examined in an open-label study. Nine patients (age < 40 years) with chronic ulcerative colitis in clinical remission on sulfasalazine 2 g/day to 3 g/day were crossed over to an equivalent Asacol dose (0.8 g/day to 1.2 g/day) for 3 months. Improvement in sperm count (p < 0.02) and morphology (p < 0.02) occurred in all cases. Improvement in sperm motility (p < 0.001) occurred in 8 of the 9 patients.

Asacol tablets are contraindicated in patients with hypersensitivity to salicylates or to any of the components of the Asacol tablet.

General: Patients with pyloric stenosis may have prolonged gastric retention of Asacol tablets which could delay release of mesalamine in the colon.

Exacerbation of the symptoms of colitis has been reported in 3% of Asacol-treated patients in controlled clinical trials. This acute reaction, characterized by cramping, abdominal pain, bloody diarrhea, and occasionally by fever, headache, malaise, pruritus, rash, and conjunctivitis, has been reported after the initiation of Asacol tablets as well as other mesalamine products. Symptoms usually abate when Asacol tablets are discontinued.

Some patients who have experienced a hypersensitivity reaction to sulfasalazine may have a similar reaction to Asacol tablets or to other compounds which contain or are converted to mesalamine.

Renal: Renal impairment, including minimal change nephropathy, acute and chronic interstitial nephritis, and, rarely, renal failure has been reported in patients taking Asacol tablets as well as other compounds which contain or are converted to mesalamine. In animal studies (rats, dogs), the kidney is the principal target organ for toxicity. At doses of approximately 750 mg/kg to 1000 mg/kg [15 to 20 times the administered recommended human dose (based on a 50 kg person) on a mg/kg basis and 3 to 4 times on a mg/m2 basis], mesalamine causes renal papillary necrosis. Therefore, caution should be exercised when using Asacol (or other compounds which contain or are converted to mesalamine or its metabolites) in patients with known renal dysfunction or history of renal disease. It is recommended that all patients have an evaluation of renal function prior to initiation of Asacol tablets and periodically while on Asacol therapy.

Information for Patients: Patients should be instructed to swallow the Asacol tablets whole, taking care not to break cut, or chew the tablets, because the coating is an important part of the delayed-release formulation. In 2% to 3% of patients in clinical studies, intact or partially intact tablets have been reported in the stool. If this occurs repeatedly, patients should contact their physician.

Drug Interactions: There are no known drug interactions.

Carcinogenesis, Mutagenesis, Impairment of Fertility: Dietary mesalamine was not carcinogenic in rats at doses as high as 480 mg/kg/day, or in mice at 2000 mg/kg/day. These doses are 2.4 and 5.1 times the maximum recommended human maintenance dose of Asacol of 1.6 g/day (32 mg/kg/day if 50 kg body weight assumed or 1184 mg/m2), respectively, based on body surface area. Mesalamine was negative in the Ames assay for mutagenesis, negative for induction of sister chromatid exchanges (SCE) and chromosomal aberrations in Chinese hamster ovary cells in vitro, and negative for induction of micronuclei (MN) in mouse bone marrow polychromatic erythrocytes. Mesalamine, at oral doses up to 480 mg/kg/day (about 1.6 times the recommended human treatment dose on a body surface area basis), was found to have no effect on fertility or reproductive performance of male and female rats.

Pediatric Use: Safety and effectiveness of Asacol tablets in pediatric patients have not been established.

Geriatric Use: Clinical studies of Asacol did not include sufficient numbers of subjects aged 65 and over to determine whether they respond differently from younger subjects. Other reported clinical experience has not identified differences in responses between the elderly and younger patients. In general, the greater frequency of decreased hepatic, renal, or cardiac function, and of concomitant disease or other drug therapy in elderly patients should be considered when prescribing Asacol. Reports from uncontrolled clinical studies and post-marketing reporting systems suggest a higher incidence of blood dyscrasias, i.e., agranulocytosis, neutropenia, pancytopenia, in subjects receiving Asacol who are 65 years or older. Caution should be taken to closely monitor blood cell counts during drug therapy.

This drug is known to be substantially excreted by the kidney, and the risk of toxic reactions to this drug may be greater in patients with impaired renal function. Because elderly patients are more likely to have decreased renal function, care should be taken when prescribing this drug therapy. As stated in the PRECAUTIONS section, it is recommended that all patients have an evaluation of renal function prior to initiation of Asacol tablets and periodically while on Asacol therapy.

Asacol tablets have been evaluated in 3685 inflammatory bowel disease patients (most patients with ulcerative colitis) in controlled and open-label studies. Adverse events seen in clinical trials with Asacol tablets have generally been mild and reversible. Adverse events presented in the following sections may occur regardless of length of therapy and similar events have been reported in short- and long-term studies and in the post-marketing setting.

Adverse events occurring in Asacol-treated patients at a frequency of 2% or greater in the two short-term, double-blind, placebo-controlled trials mentioned above are listed in Table 1 below. Overall, the incidence of adverse events seen with Asacol tablets was similar to placebo.

Of these adverse events, only rash showed a consistently higher frequency with increasing Asacol dose in these studies.

In a 6-month placebo-controlled maintenance trial involving 264 patients, 177 of whom were randomized to Asacol tablets, six (3.4%) of the Asacol patients discontinued Asacol therapy because of adverse events, as compared to four (4.6%) of the placebo patients. Adverse reactions leading to withdrawal from Asacol tablets included (each in one patient): anxiety; headache; pruritus; decreased libido; rheumatoid arthritis; and stomatitis and asthenia.

In 3342 patients in uncontrolled clinical studies, the following adverse events occurred at a frequency of 5% or greater and appeared to increase in frequency with increasing dose: asthenia, fever, flu syndrome, pain, abdominal pain, back pain, flatulence, gastrointestinal bleeding, arthralgia, and rhinitis.

In addition to the adverse events listed above, the following events have been reported in clinical studies, literature reports, and postmarketing use of products which contain (or have been metabolized to) mesalamine. Because many of these events were reported voluntarily from a population of unknown size, estimates of frequency cannot be made. These events have been chosen for inclusion due to their seriousness or potential causal connection to mesalamine:

Gastrointestinal: Anorexia, pancreatitis, gastritis, increased appetite, cholecystitis, dry mouth, oral ulcers, perforated peptic ulcer (rare), bloody diarrhea. There have been rare reports of hepatotoxicity including, jaundice, cholestatic jaundice, hepatitis, and possible hepatocellular damage including liver necrosis and liver failure. Some of these cases were fatal. Asymptomatic elevations of liver enzymes which usually resolve during continued use or with discontinuation of the drug have also been reported. One case of Kawasaki-like syndrome which included changes in liver enzymes was also reported.

Dependency: Drug dependence has not been reported with chronic administration of mesalamine.

Two cases of pediatric overdosage have been reported. A 3-year-old male who ingested 2 grams of Asacol tablets was treated with ipecac and activated charcoal; no adverse events occurred. Another 3-year-old male, approximately 16 kg, ingested an unknown amount of a maximum of 24 grams of Asacol crushed in solution (i.e., uncoated mesalamine); he was treated with orange juice and activated charcoal, and experienced no adverse events. In dogs, single doses of 6 grams of delayed-release Asacol tablets resulted in renal papillary necrosis but were not fatal. This was approximately 12.5 times the recommended human dose (based on a dose of 2.4 g/day in a 50 kg person). Single oral doses of uncoated mesalamine in mice and rats of 5000 mg/kg and 4595 mg/kg, respectively, or of 3000 mg/kg in cynomolgus monkeys, caused significant lethality.

For the treatment of mildly to moderately active ulcerative colitis: The usual dosage in adults is two 400-mg tablets to be taken three times a day for a total daily dose of 2.4 grams for a duration of 6 weeks.

For the maintenance of remission of ulcerative colitis: The recommended dosage in adults is 1.6 grams daily, in divided doses. Treatment duration in the prospective, well-controlled trial was 6 months.

Two Asacol 400 mg tablets have not been shown to be bioequivalent to one Asacol HD 800 mg tablet.

Not Bioequivalent
to Asacol HD 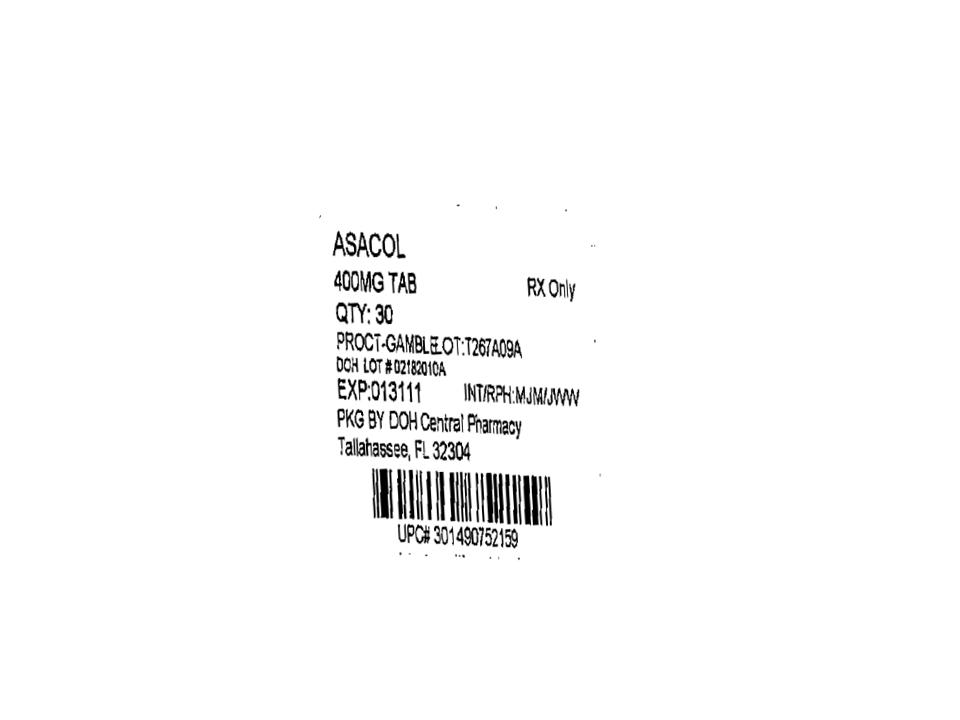