Chlordiazepoxide hydrochloride is 7-chloro-2- (methylamino)-5-phenyl-3H-1, 4-benzodiazepine 4-oxide hydrochloride. A white to practically white crystalline substance, it is soluble in water. It is unstable in solution and the powder must be protected from light. The structural formula is: 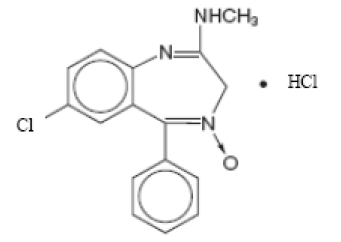 Chlordiazepoxide HCl capsules USP are indicated for the management of anxiety disorders or for the short term relief of symptoms of anxiety, withdrawal symptoms of acute alcoholism, and preoperative apprehension and anxiety. Anxiety or tension associated with the stress of everyday life usually does not require treatment with an anxiolytic.

The effectiveness of chlordiazepoxide HCl capsules USP in long term use, that is, more than 4 months, has not been assessed by systematic clinical studies. The physician should periodically reassess the usefulness of the drug for the individual patient.

Flumazenil, a specific benzodiazepine-receptor antagonist, is indicated for the complete or partial reversal of the sedative effects of benzodiazepines and may be used in situations when an overdose with a benzodiazepine is known or suspected. Prior to the administration of flumazenil, necessary measures should be instituted to secure airway, ventilation and intravenous access. Flumazenil is intended as an adjunct to, not as a substitute for, proper management of benzodiazepine overdose. Patients treated with flumazenil should be monitored for resedation, respiratory depression and other residual benzodiazepine effects for an appropriate period after treatment. The prescriber should be aware of a risk of seizure in association with flumazenil treatment, particularly in long term benzodiazepine users and in cyclic antidepressant overdose. The complete flumazenil package insert, including CONTRAINDICATIONS, WARNINGS, and PRECAUTIONS, should be consulted prior to use.