Ofloxacin Otic Solution 0.3% is a sterile aqueous anti-infective (anti-bacterial) solution for otic use. Chemically, ofloxacin has three condensed 6-membered rings made up of a fluorinated carboxy-quinolone with a benzoxazine ring. The chemical name of ofloxacin is: (±)-9-fluoro-2,3-dihydro-3-methyl-10-(4-methyl-1-piperazinyl)-7-oxo-7 H-pyrido[1,2,3- de]-1,4-benzoxazine-6-carboxylic acid. The empirical formula of ofloxacin is C 18H 20FN 3O 4 and its molecular weight is 361.38. The structural formula is: 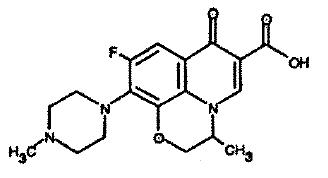 Ofloxacin has in vitro activity against a wide range of gram-negative and gram-positive microorganisms. Ofloxacin exerts its antibacterial activity by inhibiting DNA gyrase, a bacterial topoisomerase. DNA gyrase is an essential enzyme which controls DNA topology and assists in DNA replication, repair, deactivation, and transcription. Cross-resistance has been observed between ofloxacin and other fluoroquinolones. There is generally no cross-resistance between ofloxacin and other classes of antibacterial agents such as beta-lactams or aminoglycosides.

Ofloxacin has been shown to be active against most isolates of the following microorganisms, both in vitro and clinically in otic infections as described in the INDICATIONS AND USAGE section.

Ofloxacin otic solution 0.3% is indicated for the treatment of infections caused by susceptible isolates of the designated microorganisms in the specific conditions listed below:

Otitis Externa in adults and pediatric patients, 6 months and older, due to Escherichia coli, Pseudomonas aeruginosa, and Staphylococcus aureus.

Ofloxacin otic solution 0.3% is contraindicated in patients with a history of hypersensitivity to ofloxacin, to other quinolones, or to any of the components in this medication.

NOT FOR OPHTHALMIC USE.

Serious and occasionally fatal hypersensitivity (anaphylactic) reactions, some following the first dose, have been reported in patients receiving systemic quinolones, including ofloxacin. Some reactions were accompanied by cardiovascular collapse, loss of consciousness, angioedema (including laryngeal, pharyngeal or facial edema), airway obstruction, dyspnea, urticaria, and itching. If an allergic reaction to ofloxacin is suspected, stop the drug. Serious acute hypersensitivity reactions may require immediate emergency treatment. Oxygen and airway management, including intubation, should be administered as clinically indicated.

As with other anti-infective preparations, prolonged use may result in over-growth of nonsusceptible organisms, including fungi. If the infection is not improved after one week, cultures should be obtained to guide further treatment. If otorrhea persists after a full course of therapy, or if two or more episodes of otorrhea occur within six months, further evaluation is recommended to exclude an underlying condition such as cholesteatoma, foreign body, or a tumor.

The systemic administration of quinolones, including ofloxacin at doses much higher than given or absorbed by the otic route, has led to lesions or erosions of the cartilage in weight-bearing joints and other signs of arthropathy in immature animals of various species.

Young growing guinea pigs dosed in the middle ear with 0.3% ofloxacin otic solution showed no systemic effects, lesions or erosions of the cartilage in weight-bearing joints, or other signs of arthropathy. No drug-related structural or functional changes of the cochlea and no lesions in the ossicles were noted in the guinea pig following otic administration of 0.3% ofloxacin for one month.

No signs of local irritation were found when 0.3% ofloxacin was applied topically in the rabbit eye. Ofloxacin was also shown to lack dermal sensitizing potential in the guinea pig maximization study.

Avoid contaminating the applicator tip with material from the fingers or other sources. This precaution is necessary if the sterility of the drops is to be preserved. Systemic quinolones, including ofloxacin, have been associated with hypersensitivity reactions, even following a single dose. Discontinue use immediately and contact your physician at the first sign of a rash or allergic reaction.

Prior to administration of ofloxacin otic solution, the solution should be warmed by holding the bottle in the hand for one or two minutes to avoid dizziness which may result from the instillation of a cold solution. The patient should lie with the affected ear upward, and then the drops should be instilled. This position should be maintained for five minutes to facilitate penetration of the drops into the ear canal. Repeat, if necessary, for the opposite ear (see DOSAGE AND ADMINISTRATION).

Prior to administration of ofloxacin otic solution, the solution should be warmed by holding the bottle in the hand for one or two minutes to avoid dizziness which may result from the instillation of a cold solution. The patient should lie with the affected ear upward, and then the drops should be instilled. The tragus should then be pumped 4 times by pushing inward to facilitate penetration of the drops into the middle ear. This position should be maintained for five minutes. Repeat, if necessary, for the opposite ear (see DOSAGE AND ADMINISTRATION).

Specific drug interaction studies have not been conducted with ofloxacin otic solution.

Long-term studies to determine the carcinogenic potential of ofloxacin have not been conducted. Ofloxacin was not mutagenic in the Ames test, the sister chromatid exchange assay (Chinese hamster and human cell lines), the unscheduled DNA synthesis (UDS) assay using human fibroblasts, the dominant lethal assay, or the mouse micronucleus assay. Ofloxacin was positive in the rat hepatocyte UDS assay, and in the mouse lymphoma assay. In rats, ofloxacin did not affect male or female reproductive performance at oral doses up to 360 mg/kg/day. This would be over 1000 times the maximum recommended clinical dose, based upon body surface area, assuming total absorption of ofloxacin from the ear of a patient treated with ofloxacin otic solution twice per day.

Ofloxacin has been shown to have an embryocidal effect in rats at a dose of 810 mg/kg/day and in rabbits at 160 mg/kg/day.

Ofloxacin has not been shown to have any adverse effects on the developing embryo or fetus at doses relevant to the amount of ofloxacin that will be delivered ototopically at the recommended clinical doses.

Additional studies in the rat demonstrated that doses up to 360 mg/kg/day during late gestation had no adverse effects on late fetal development, labor, delivery, lactation, neonatal viability, or growth of the newborn. There are, however, no adequate and well-controlled studies in pregnant women. Ofloxacin otic solution should be used during pregnancy only if the potential benefit justifies the potential risk to the fetus.

In nursing women, a single 200 mg oral dose resulted in concentrations of ofloxacin in milk which were similar to those found in plasma. It is not known whether ofloxacin is excreted in human milk following topical otic administration. Because of the potential for serious adverse reactions from ofloxacin in nursing infants, a decision should be made whether to discontinue nursing or to discontinue the drug, taking into account the importance of the drug to the mother.

Safety and efficacy have been demonstrated in pediatric patients of the following ages for the listed indications:

Safety and efficacy in pediatric patients below these ages have not been established.

Although no data are available on patients less than age 6 months, there are no known safety concerns or differences in the disease process in this population that will preclude use of this product.

No changes in hearing function occurred in 30 pediatric subjects treated with ofloxacin otic and tested for audiometric parameters.

Although quinolones, including ofloxacin, have been shown to cause arthropathy in immature animals after systemic administration, young growing guinea pigs dosed in the middle ear with 0.3% ofloxacin otic solution for one month showed no systemic effects, quinolone-induced lesions, erosions of the cartilage in weight-bearing joints, or other signs of arthropathy.

In the phase III clinical trials performed in support of once-daily dosing, 799 subjects with otitis externa and intact tympanic membranes were treated with ofloxacin otic solution. The studies, which served as the basis for approval, were 020 (pediatric, adolescents and adults), 016 (adolescents and adults) and 017 (pediatric). The following treatment-related adverse events occurred in two or more of the subjects.

In phase III clinical trials which formed the basis for approval, the following treatment-related adverse events occurred in 1% or more of the 656 subjects with non-intact tympanic membranes in AOM TT or CSOM treated twice-daily with ofloxacin otic solution:

Cases of uncommon transient neurospsychiatric disturbances have been included in spontaneous post-marketing reports. A causal relationship with ofloxacin otic solution 0.3% is unknown.

The recommended dosage regimen for the treatment of otitis externa is:

The recommended dosage regimen for the treatment of acute otitis media in pediatric patients (from one to 12 years old) with tympanostomy tubes is:

The recommended dosage regimen for the treatment of chronic suppurative otitis media with perforated tympanic membranes in patients 12 years and older is:

IMPORTANT PATIENT INFORMATION AND INSTRUCTIONS. READ BEFORE USE.

What is Ofloxacin Otic Solution?

Ofloxacin Otic Solution is an antibiotic in a sterile solution used to treat ear infections caused by certain bacteria found in:

A middle ear infection is a bacterial infection behind the eardrum. People with a hole or a tube in the eardrum may notice a discharge (fluid draining) in the ear canal.

Who should NOT use Ofloxacin Otic Solution?

How should Ofloxacin Otic Solution be given?

BE SURE TO FOLLOW THE INSTRUCTIONS BELOW FOR THE PATIENT’S SPECIFIC EAR INFECTION.

Repeat Steps 2-5 for the other ear if both ears are infected.

How often should Ofloxacin Otic Solution be given?

In patients with an Ear Canal Infection ("Swimmer’s Ear"), Ofloxacin Otic Solution ear drops should be given once daily at about the same time each day (for example, 8 AM or 8 PM) in each infected ear unless the doctor has instructed otherwise.

In patients with a Middle Ear Infection, Ofloxacin Otic Solution ear drops should be given 2 times each day (about 12 hours apart, for example 8 AM and 8 PM) in each infected ear unless the doctor has instructed otherwise. The best times to use the ear drops are in the morning and at night.

What if a dose is missed?

In patients with an Ear Canal Infection (“Swimmer’s Ear”), it is important that you take the drops every day.  If you miss a dose which may have been scheduled for earlier in the day, (for example 8 AM), you should take that day’s dose as soon as possible and then go back to your regular daily dosing schedule.

In patients with a Middle Ear Infection, if a dose of Ofloxacin Otic Solution is missed, it should be given as soon as possible. However, if it is almost time for the next dose, skip the missed dose and go back to the regular dosing schedule.

Do not use a double dose unless the doctor has instructed you to do so. If the infection is not improved after one week, you should consult your doctor. If you have two or more episodes of drainage within six months, it is recommended that you see your doctor for further evaluation.

What activities should be avoided while using Ofloxacin Otic Solution?

What are some of the possible side effects of Ofloxacin Otic Solution?

During the testing of Ofloxacin Otic Solution in external ear infections, the most common side effect was discomfort upon application which happened in 7% of patients. If the pain is severe, the medication should be stopped and you should contact your doctor. Other side effects were: itching (1%), earache (0.8%), and dizziness (0.4%).

During testing in middle ear infections, the most common side effect was a bitter taste which happened in 7% of patients with a middle ear infection. This may occur when some of the drops pass from the middle ear to the back of the mouth. This side effect is not serious and there is no need to stop the medicine if this should happen. Other side effects which were found in 1% of the patients were: earache, itching, abnormal sensation, rash and dizziness.

Call your doctor about these or other side effects if they occur.

If a rash or an allergic reaction to Ofloxacin Otic Solution occurs, stop using the product and contact your doctor.

DO NOT TAKE OFLOXACIN OTIC SOLUTION BY MOUTH.

If Ofloxacin Otic Solution is accidentally swallowed or overdose occurs, call the doctor immediately. This medicine is available only with a doctor's prescription. Use only as directed. Do not use this medicine if outdated.

This Patient Information has been approved by the U.S. Food and Drug Administration.