Warning: Because midodrine hydrochloride  can cause marked elevation of supine blood pressure, it should be used in patients whose lives are considerably impaired despite standard clinical care. The indication for use of midodrine hydrochloride  in the treatment of symptomatic orthostatic hypotension is based primarily on a change in a surrogate marker of effectiveness, an increase in systolic blood pressure measured one minute after standing, a surrogate marker considered likely to correspond to a clinical benefit. At present, however, clinical benefits of midodrine hydrochloride, principally improved ability to carry out activities of daily living, have not been verified. 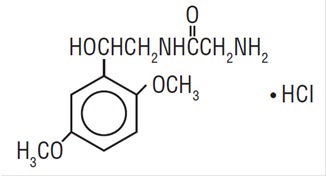 Mechanism of Action: Midodrine hydrochloride  forms an active metabolite, desglymidodrine, that is an alpha1-agonist, and exerts its actions via activation of the alpha-adrenergic receptors of the arteriolar and venous vasculature, producing an increase in vascular tone and elevation of blood pressure. Desglymidodrine does not stimulate cardiac beta-adrenergic receptors. Desglymidodrine diffuses poorly across the blood-brain barrier, and is therefore not associated with effects on the central nervous system.


Administration of midodrine hydrochloride  results in a rise in standing, sitting, and supine systolic and diastolic blood pressure in patients with orthostatic hypotension of various etiologies. Standing systolic blood pressure is elevated by approximately 15 to 30 mmHg at 1 hour after a 10 mg dose of midodrine, with some effect persisting for 2 to 3 hours. Midodrine hydrochloride  has no clinically significant effect on standing or supine pulse rates in patients with autonomic failure.


Metabolism and Excretion: Thorough metabolic studies have not been conducted, but it appears that deglycination of midodrine to desglymidodrine takes place in many tissues, and both compounds are metabolized in part by the liver. Neither midodrine nor desglymidodrine is a substrate for monoamine oxidase.


Renal elimination of midodrine is insignificant. The renal clearance of desglymidodrine is of the order of 385 mL/minute, most, about 80%, by active renal secretion. The actual mechanism of active secretion has not been studied, but it is possible that it occurs by the base-secreting pathway responsible for the secretion of several other drugs that are bases (see also Potential for Drug Interactions).


Midodrine has been studied in 3 principal controlled trials, one of 3-weeks duration and 2 of 1 to 2 days duration. All studies were randomized, double-blind and parallel-design trials in patients with orthostatic hypotension of any etiology and supine-to-standing fall of systolic blood pressure of at least 15 mmHg accompanied by at least moderate dizziness/lightheadedness. Patients with pre-existing sustained supine hypertension above 180/110 mmHg were routinely excluded. In a 3-week study in 170 patients, most previously untreated with midodrine, the midodrine-treated patients (10 mg t.i.d., with the last dose not later than 6 P.M.) had significantly higher (by about 20 mmHg) 1-minute standing systolic pressure 1 hour after dosing (blood pressures were not measured at other times) for all 3 weeks. After week 1, midodrine-treated patients had small improvements in dizziness/lightheadedness/unsteadiness scores and global evaluations, but these effects were made difficult to interpret by a high early drop-out rate (about 25% vs 5% on placebo). Supine and sitting blood pressure rose 16/8 and 20/10 mmHg, respectively, on average.


In a 2-day study, after open-label midodrine, known midodrine responders received midodrine 10 mg or placebo at 0, 3, and 6 hours. One-minute standing systolic blood pressures were increased 1 hour after each dose by about 15 mmHg and 3 hours after each dose by about 12mmHg; 3-minute standing pressures were increased also at 1, but not 3, hours after dosing. There were increases in standing time seen intermittently 1 hour after dosing, but not at 3 hours.

A study with 16 patients undergoing hemodialysis demonstrated that midodrine hydrochloride  is removed by dialysis.


After initiation of treatment, midodrine hydrochloride tablets  should be continued only for patients who report significant symptomatic improvement.


Blood pressure should be monitored carefully when midodrine hydrochloride is used concomitantly with other agents that cause vasoconstriction, such as phenylephrine, ephedrine, dihydroergotamine, phenylpropanolamine, or pseudoephedrine.


Midodrine hydrochloride  should be used cautiously in patients with urinary retention problems, as desglymidodrine acts on the alpha-adrenergic receptors of the bladder neck.


Midodrine hydrochloride  should be used with caution in orthostatic hypotensive patients who are also diabetic, as well as those with a history of visual problems who are also taking fludrocortisone acetate, which is known to cause an increase in intraocular pressure and glaucoma.


Avoid use of MAO inhibitors or linezolid with midodrine.

It appears possible, although there is no supporting experimental evidence, that the high renal clearance of desyglymidodrine (a base) is due to active tubular secretion by the base-secreting system also responsible for the secretion of such drugs as metformin, cimetidine, ranitidine, procainamide, triamterene, flecainide, and quinidine. Thus there may be a potential for drug-drug interactions with these drugs.

Midodrine hydrochloride  increased the rate of embryo resorption, reduced fetal body weight in rats and rabbits, and decreased fetal survival in rabbits when given in doses 13 (rat) and 7 (rabbit) times the maximum human dose based on body surface area (mg/m2). There are no adequate and well-controlled studies in pregnant women. Midodrine hydrochloride  should be used during pregnancy only if the potential benefit justifies the potential risk to the fetus. No teratogenic effects have been observed in studies in rats and rabbits.


The frequency of these events in a 3-week placebo-controlled trial is shown in the following table:

Symptoms of overdose could include hypertension, piloerection (goosebumps), a sensation of coldness and urinary retention. There are 2 reported cases of overdosage with midodrine hydrochloride, both in young males. One patient ingested midodrine hydrochloride  drops, 250 mg, experienced systolic blood pressure greater than 200 mmHg, was treated with an IV injection of 20 mg of phentolamine, and was discharged the same night without any complaints. The other patient ingested 205 mg of midodrine hydrochloride  (41 5 mg tablets), and was found lethargic and unable to talk, unresponsive to voice but responsive to painful stimuli, hypertensive and bradycardic. Gastric lavage was performed, and the patient recovered fully by the next day without sequelae.


The single doses that would be associated with symptoms of overdosage or would be potentially life-threatening are unknown. The oral LD50 is approximately 30 to 50 mg/kg in rats, 675 mg/kg in mice, and 125 to 160 mg/kg in dogs.


Recommended general treatment, based on the pharmacology of the drug, includes induced emesis and administration of alpha-sympatholytic drugs (e.g., phentolamine).

The recommended dose of midodrine hydrochloride tablets  is 10 mg, 3 times daily. Dosing should take place during the daytime hours when the patient needs to be upright, pursuing the activities of daily living. A suggested dosing schedule of approximately 4-hour intervals is as follows: shortly before, or upon arising in the morning, midday and late afternoon (not later than 6 P.M.). Doses may be given in 3-hour intervals, if required, to control symptoms, but not more frequently. Single doses as high as 20 mg have been given to patients, but severe and persistent systolic supine hypertension occurs at a high rate (about 45%) at this dose. In order to reduce the potential for supine hypertension during sleep, midodrine hydrochloride tablets should not be given after the evening meal or less than 4 hours before bedtime. Total daily doses greater than 30 mg have been tolerated by some patients, but their safety and usefulness have not been studied systematically or established. Because of the risk of supine hypertension, midodrine hydrochloride tablets should be continued only in patients who appear to attain symptomatic improvement during initial treatment.


The supine and standing blood pressure should be monitored regularly, and the administration of midodrine hydrochloride tablets should be stopped if supine blood pressure increases excessively.


Because desglymidodrine is excreted renally, dosing in patients with abnormal renal function should be cautious; although this has not been systematically studied, it is recommended that treatment of these patients be initiated using 2.5 mg doses. Dosing in children has not been adequately studied.


Blood levels of midodrine and desglymidodrine were similar when comparing levels in patients 65 or older vs. younger than 65 and when comparing males vs. females, suggesting dose modifications for these groups are not necessary.


Midodrine Hydrochloride Tablets, USP 2.5 mg are white to off-white rectangle shaped, flat faced, beveled edge, scored tablets, debossed with “M” above the score and “2.5” below the score on one side of the tablet and “2.5” on the other side.

Midodrine Hydrochloride Tablets, USP 5 mg are white to off-white round shaped, flat faced, beveled edge, scored tablets, debossed with “M” above the score, “5” below the score on one side and “5” on the other side.


Midodrine Hydrochloride Tablets, USP 10 mg are white to off-white capsule shaped, flat faced, beveled edge, scored tablets, debossed with “M” on the left of the score and “10” on  right of the score on one side of the tablet and “10” on the other side. 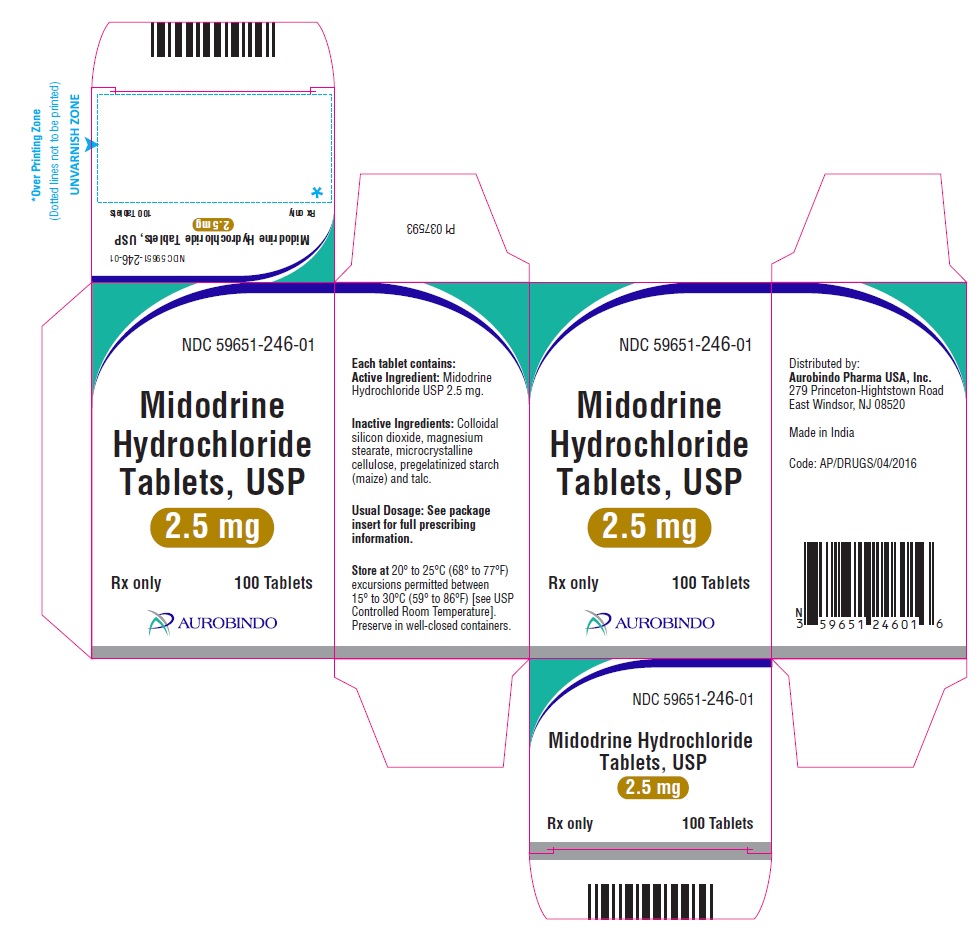 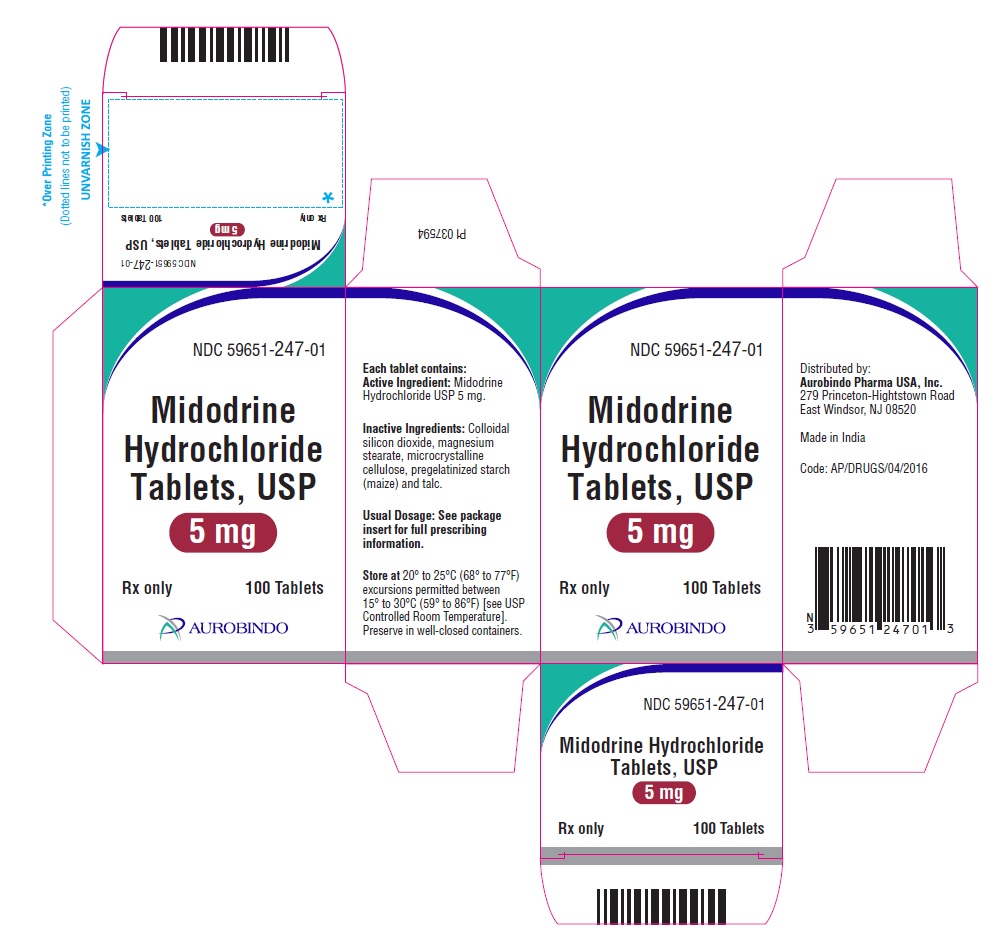 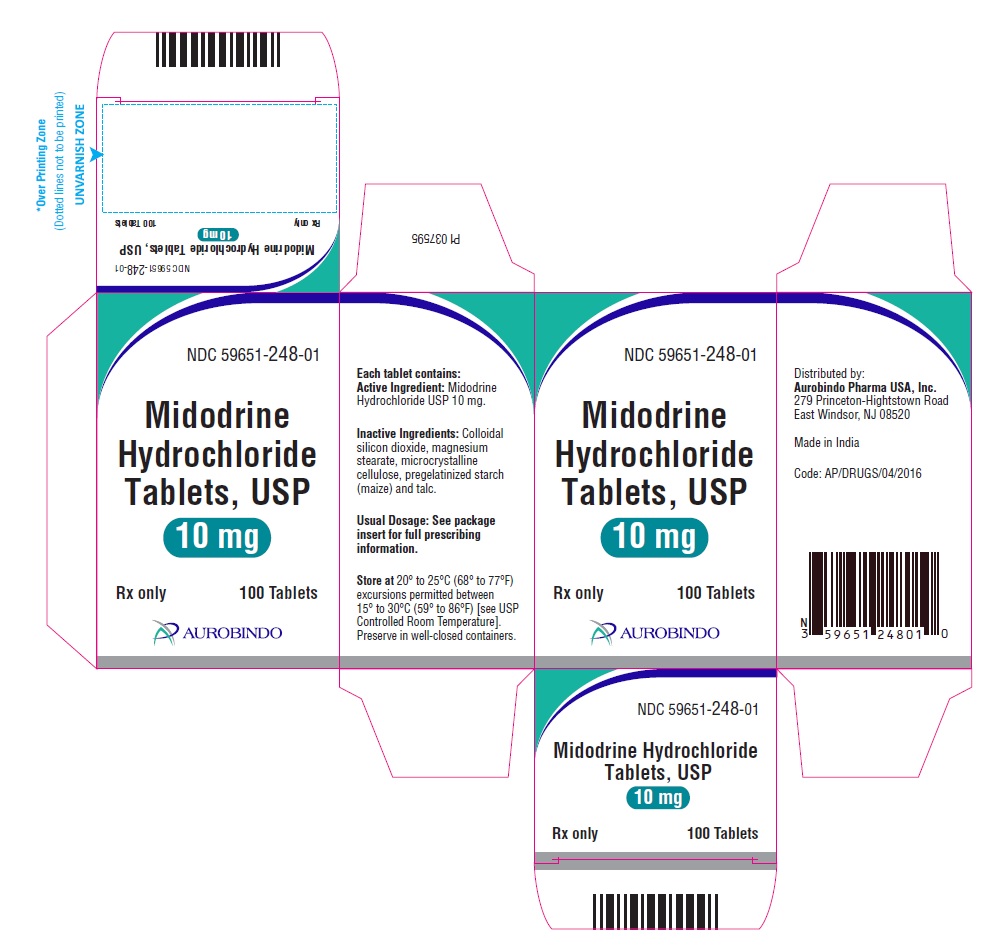