Diphenhydramine Hydrochloride is an antihistamine drug having the chemical name 2-(diphenylmethoxy)-N, N-dimethylethylamine hydrochloride. It occurs as a white, odorless crystalline powder and is freely soluble in water and alcohol. The structural formula is as follows:

Each capsule contains 50 mg of diphenhydramine hydrochloride for oral administration.

Diphenhydramine hydrochloride is an antihistamine with anticholinergic (drying) and sedative effects. Antihistamines appear to compete with histamine for cell receptor sites on effector cells.

A single oral dose of diphenhydramine hydrochloride is quickly absorbed with maximum activity occurring in approximately one hour. The duration of activity following an average dose of diphenhydramine hydrochloride is from four to six hours. Diphenhydramine is widely distributed throughout the body, including the CNS. Little, if any, is excreted unchanged in the urine; most appears as the degradation products of metabolic transformation in the liver, which are almost completely excreted within 24 hours.

Diphenhydramine hydrochloride in the oral form is effective for the following indications:

For allergic conjunctivitis due to foods; mild, uncomplicated allergic skin manifestations of urticaria and angioedema; amelioration of allergic reactions to blood or plasma; dermatographism; as therapy for anaphylactic reactions adjunctive to epinephrine and other standard measures after the acute manifestations have been controlled.

For active and prophylactic treatment of motion sickness.

Use in Newborn or Premature Infants:

Use in Nursing Mothers:

Because of the higher risk of antihistamines for infants generally, and for newborns and prematures in particular, antihistamine therapy is contraindicated in nursing mothers.

Antihistamines are also contraindicated in the following conditions: Hypersensitivity to diphenhydramine hydrochloride and other antihistamines of similar chemical structure.

In infants and children, especially, antihistamines in overdosage may cause hallucinations, convulsions, or death.

As in adults, antihistamines may diminish mental alertness in children. In the young child, particularly, they may produce excitation.

Use in Elderly (approximately 60 years or older):

Antihistamines are more likely to cause dizziness, sedation, and hypotension in elderly patients.

Diphenhydramine hydrochloride has an atropine-like action and therefore should be used with caution in patients with a history of lower respiratory disease including asthma, increased intraocular pressure, hyperthyroidism, cardiovascular disease or hypertension.

Patients taking diphenhydramine hydrochloride should be advised that this drug may cause drowsiness and has an additive effect with alcohol.

Patients should be warned about engaging in activities requiring mental alertness such as driving a car or operating appliances, machinery, etc.

Long-term studies in animals to determine mutagenic and carcinogenic potential have not been performed.

Reproduction studies have been performed in rats and rabbits at doses up to 5 times the human dose and have revealed no evidence of impaired fertility or harm to the fetus due to diphenhydramine hydrochloride. There are, however, no adequate and well-controlled studies in pregnant women. Because animal reproduction studies are not always predictive of human response, this drug should be used during pregnancy only if clearly needed.

The most frequent adverse reactions are underscored.

If vomiting has not occurred spontaneously the patient should be induced to vomit. This is best done by having him drink a glass of water or milk after which he should be made to gag. Precautions against aspiration must be taken, especially in infants and children.

If vomiting is unsuccessful gastric lavage is indicated within 3 hours after ingestion and even later if large amounts of milk or cream were given beforehand. Isotonic or (½) isotonic saline is the lavage solution of choice.

Saline cathartics, as milk of magnesia, by osmosis draw water into the bowel and therefore are valuable for their action in rapid dilution of bowel content.

DOSAGE SHOULD BE INDIVIDUALIZED ACCORDING TO THE NEEDS AND RESPONSE OF THE PATIENT.

25 to 50 mg three or four times daily. The nighttime sleep-aid dosage is 50 mg at bedtime.

Data are not available on the use of diphenhydramine hydrochloride as a nighttime sleep-aid in children under 12 years.

The basis for determining the most effective dosage regimen will be the response of the patient to medication and the condition under treatment.

In motion sickness, full dosage is recommended for prophylactic use, the first dose to be given 30 minutes before exposure to motion and similar doses before meals and upon retiring for the duration of exposure. 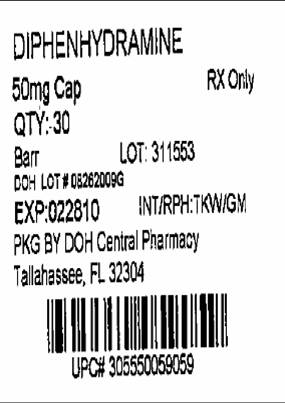