The recommended dose of ANGIOMAX RTU is an intravenous bolus dose of 0.75 mg/kg, followed immediately by a maintenance infusion of 1.75 mg/kg/h for the duration of the procedure. Five minutes after the bolus dose has been administered, assess activated clotting time (ACT) to determine if an additional bolus of 0.3 mg/kg is needed.

Consider extending duration of infusion following PCI at 1.75 mg/kg/h for up to 4 hours post- procedure in patients with ST segment elevation MI (STEMI).

In patients with creatinine clearance less than 30 mL/min (by Cockcroft Gault equation), reduce the infusion rate to 1 mg/kg/h.

Parenteral drug products should be inspected visually for particulate matter and discoloration prior to administration, whenever solution and container permit.Once removed from refrigerator, use immediately [see How Supplied Storage and Handling (16.2)].  Discard any unused portion.

Do not administer the drugs listed in Table 1 in the same intravenous line with ANGIOMAX RTU.

Table 1. Drugs Not for Administration in the Same Intravenous Line with ANGIOMAX RTU

ANGIOMAX RTU is contraindicated in patients with:

An increased risk of thrombus formation, including fatal outcomes, has been associated with the use of bivalirudin in gamma brachytherapy [see Adverse Reactions (6.2)].

In the BAT trials, 79 of the 2161 (3.7%) of subjects undergoing PCI for treatment of unstable angina and randomized to bivalirudin experienced intracranial bleeding, retroperitoneal bleeding, clinically overt bleeding with a decrease in hemoglobin greater than 3 g/dL or leading to a transfusion of greater than 2 units of blood.

As with all therapeutic proteins, there is potential for immunogenicity. The detection of antibody formation is highly dependent on the sensitivity and specificity of the assay. Additionally, the observed incidence of antibody (including neutralizing antibody) positivity in an assay may be influenced by several factors including assay methodology, sample handling, timing of sample collection, concomitant medications, and underlying disease. For these reasons, comparison of the incidence of antibodies to bivalirudin in the studies described below with the incidence of antibodies in other studies or to other products may be misleading.

In clinical trials in patients undergoing PCI, co-administration of bivalirudin with heparin, warfarin, thrombolytics, or GPIs was associated with increased risks of major bleeding events compared to patients not receiving these concomitant medications.

There are no available data on use of bivalirudin in pregnant women to inform a drug-associated risk of adverse developmental outcomes. Reproduction studies in rats and rabbits administered subcutaneously (SC) doses up to 1.6 times and 3.2 times the maximum recommended human dose (MRHD) based on body surface area (BSA), respectively, revealed no evidence of fetal harm.

At 500 mg/kg/day subcutaneously, litter sizes and live fetuses in rats were reduced. Fetal skeletal variations were also noted. Some of these changes could be attributed to maternal toxicity observed at high doses.

It is not known whether bivalirudin is present in human milk. No data are available on the effects of bivalirudin on the breastfed child or on milk production. 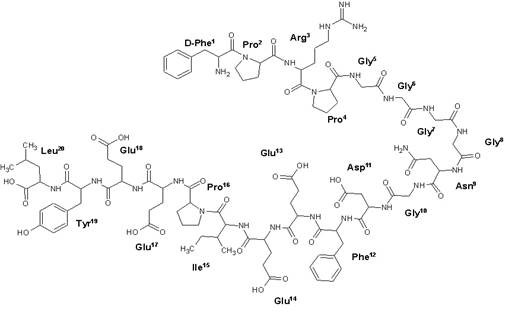 The pH of ANGIOMAX RTU may have been adjusted with sodium hydroxide and/or hydrochloric acid to 5.0 to 5.5. The solution is intended for intravenous use at room temperature.

In 291 patients with ≥70% vessel occlusion undergoing routine PTCA, a positive correlation was observed between the dose of bivalirudin and the proportion of patients achieving ACT values of 300 sec or 350 sec. At a bivalirudin dose of 1 mg/kg intravenous bolus plus 2.5 mg/kg/h intravenous infusion (1.4 times higher than the approved dose of 1.75 mg/kg/h) for 4 hours, followed by 0.2 mg/kg/h, all patients reached maximal ACT values greater than 300 sec.

Bivalirudin does not bind to plasma proteins (except thrombin) or to red blood cells.

No long-term studies in animals have been performed to evaluate the carcinogenic potential of bivalirudin. Bivalirudin displayed no genotoxic potential in the in vitro bacterial cell reverse mutation assay (Ames test), the in vitro Chinese hamster ovary cell forward gene mutation test (CHO/HGPRT), the in vitro human lymphocyte chromosomal aberration assay, the in vitro rat hepatocyte unscheduled DNA synthesis (UDS) assay, and the in vitro rat micronucleus assay. Fertility and general reproductive performance in rats were unaffected by subcutaneous doses of bivalirudin up to 150 mg/kg/day, about 1.6 times the dose on a body surface area basis (mg/m2) of a 50 kg person given the maximum recommended dose of 15 mg/kg/day.

In the BAT studies, patients with unstable angina undergoing PCI were randomized 1:1 to a 1 mg/kg bolus of bivalirudin and then 2.5 mg/kg/h for four hours and then 0.2 mg/kg/h for 14 to 20 hours or to 175 IU/kg bolus of heparin followed by an 18- to 24-hour infusion of 15 IU/kg/h infusion. Additional heparin but not bivalirudin could be administered for ACT less than 350 seconds. The studies were designed to demonstrate the superiority of bivalirudin to heparin on the occurrence of any of the following during hospitalization up to seven days of death, MI, abrupt closure of the dilated vessel, or clinical deterioration requiring revascularization or placement of an aortic balloon pump.

Twenty-three percent of patients were treated with heparin within one hour prior to randomization.

The studies did not demonstrate that bivalirudin was statistically superior to heparin for reducing the risk of death, MI, abrupt closure of the dilated vessel, or clinical deterioration requiring revascularization or placement of an aortic balloon pump, but the occurrence of these events was similar in both treatment groups. Study outcomes are shown in Table 2.

Each vial contains 250 mg of bivalirudin (equivalent to an average of 275 mg bivalirudin trifluoroacetate*).

Advise patients to watch carefully for any signs of bleeding or bruising and to report these to their healthcare provider when they occur.