Methazolamide, a sulfonamide derivative, is a white crystalline powder, weakly acidic, slightly soluble in water, alcohol and acetone. The chemical name for methazolamide is: N-[5-(aminosulfonyl)-3-methyl-1,3,4-thiadiazo1-2(3H)-ylidene]-acetamide and it has the following structural formula:

Methazolamide is a potent inhibitor of carbonic anhydrase.

Methazolamide is distributed throughout the body including the plasma, cerebrospinal fluid, aqueous humor of the eye, red blood cells, bile and extra-cellular fluid. The mean apparent volume of distribution (V area/F) ranges from 17 L to 23 L. Approximately 55% is bound to plasma proteins. The steady-state methazolamide red blood cell:plasma ratio varies with dose and was found to be 27:1, 16:1, and 10:1 following the administration of methazolamide 25 mg bid, 50 mg bid, and 100 mg bid, respectively.

Methazolamide is a sulfonamide derivative; however, it does not have any clinically significant antimicrobial properties. Although methazolamide achieves a high concentration in the cerebrospinal fluid, it is not considered an effective anticonvulsant.

Methazolamide has a weak and transient diuretic effect; therefore, use results in an increase in urinary volume, with excretion of sodium, potassium, and chloride. The drug should not be used as a diuretic. Inhibition of renal bicarbonate reabsorption produces an alkaline urine. Plasma bicarbonate decreases, and a relative, transient metabolic acidosis may occur due to a disequilibrium in carbon dioxide transport in the red blood cell. Urinary citrate excretion is decreased by approximately 40% after doses of 100 mg every 8 hours. Uric acid output has been shown to decrease 36% in the first 24 hour period.

Methazolamide therapy is contraindicated in situations in which sodium and/or potassium serum levels are depressed, in cases of marked kidney or liver disease or dysfunction, in adrenal gland failure, and in hyperchloremic acidosis. In patients with cirrhosis, use may precipitate the development of hepatic encephalopathy.

Long-term administration of methazolamide is contraindicated in patients with angle-closure glaucoma, since organic closure of the angle may occur in spite of lowered intraocular pressure.

Fatalities have occurred, although rarely, due to severe reactions to sulfonamides including Stevens-Johnson syndrome, toxic epidermal necrolysis, fulminant hepatic necrosis, agranulocytosis, aplastic anemia, and other blood dyscrasias. Hypersensitivity reactions may recur when a sulfonamide is readministered, irrespective of the route of administration.

If hypersensitivity or other serious reactions occur, the use of this drug should be discontinued.

Potassium excretion is increased initially upon administration of methazolamide and in patients with cirrhosis or hepatic insufficiency could precipitate a hepatic coma.

In patients with pulmonary obstruction or emphysema, where alveolar ventilation may be impaired, methazolamide should be used with caution because it may precipitate or aggravate acidosis.

To monitor for hematologic reactions common to all sulfonamides, it is recommended that a baseline CBC and platelet count be obtained on patients prior to initiating methazolamide therapy and at regular intervals during therapy. If significant changes occur, early discontinuance and institution of appropriate therapy are important. Periodic monitoring of serum electrolytes is also recommended.

Methazolamide should be used with caution in patients on steroid therapy because of the potential for developing hypokalemia.

Long-term studies in animals to evaluate the carcinogenic potential of methazolamide and its effect on fertility have not been conducted. Methazolamide was not mutagenic in the Ames bacterial test.

Methazolamide has been shown to be teratogenic (skeletal anomalies) in rats when given in doses approximately 40 times the human dose. There are no adequate and well controlled studies in pregnant women. Methazolamide should be used during pregnancy only if the potential benefit justifies the potential risk to the fetus.

It is not known whether this drug is excreted in human milk. Because many drugs are excreted in human milk and because of the potential for serious adverse reactions in nursing infants from methazolamide, a decision should be made whether to discontinue nursing or to discontinue the drug, taking into account the importance of the drug to the mother.

The safety and effectiveness of methazolamide in children have not been established.

Adverse reactions, occurring most often early in therapy, include paresthesias, particularly a “tingling” feeling in the extremities; hearing dysfunction or tinnitus; fatigue; malaise; loss of appetite; taste alteration; gastrointestinal disturbances such as nausea, vomiting, and diarrhea; polyuria; and occasional instances of drowsiness and confusion.

Transient myopia has been reported. This condition invariably subsides upon diminution or discontinuance of the medication.

No data are available regarding methazolamide overdosage in humans as no cases of acute poisoning with this drug have been reported. Animal data suggest that even a high dose of methazolamide is nontoxic. No specific antidote is known. Treatment should be symptomatic and supportive.

Electrolyte imbalance, development of an acidotic state, and central nervous system effects might be expected to occur. Serum electrolyte levels (particularly potassium) and blood pH levels should be monitored.

Supportive measures may be required to restore electrolyte and pH balance.

The effective therapeutic dose administered varies from 50 mg to 100 mg two or three times daily. The drug may be used concomitantly with miotic and osmotic agents. 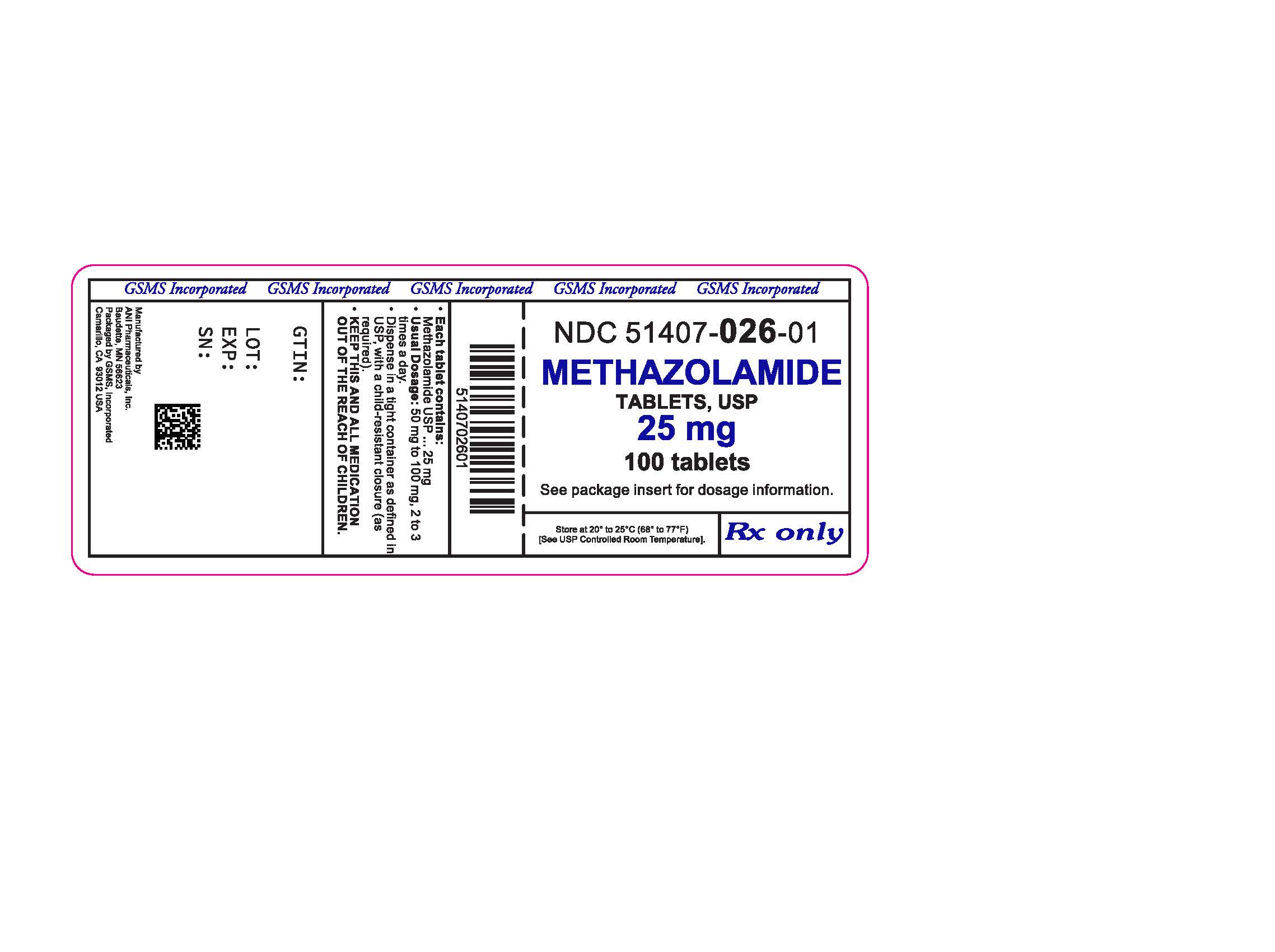 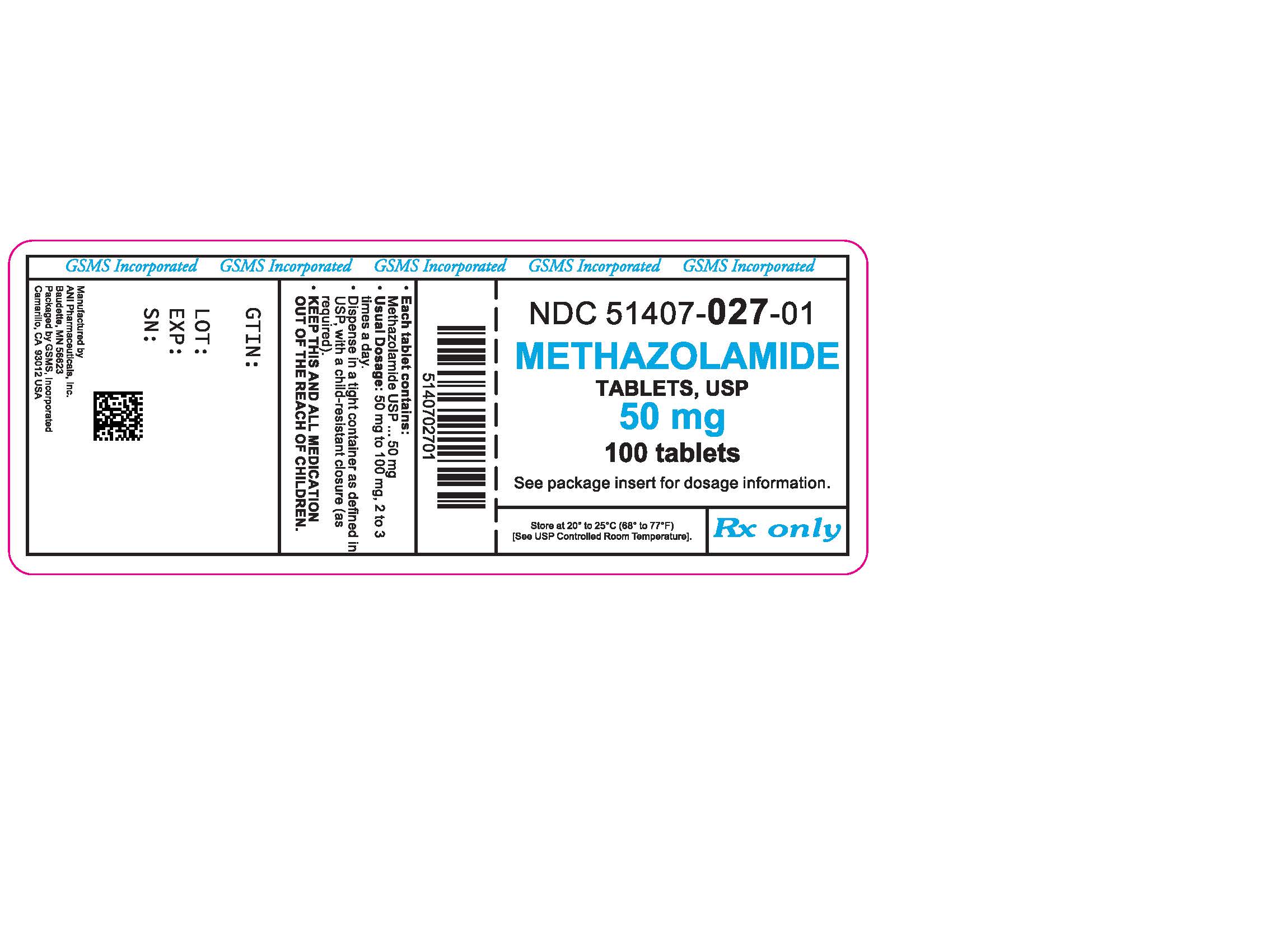