The most widely accepted mechanism of action of sulfonamides is the Woods-Fildes theory, based on sulfonamides acting as a competitive inhibitor of para-aminobenzoic acid (PABA) utilization, an essential component for bacterial growth. While absorption through intact skin in humans has not been determined, in vitro studies with human cadaver skin indicated a percutaneous absorption of about 4%. Sodium sulfacetamide is readily absorbed from the gastrointestinal tract when taken orally and excreted in the urine largely unchanged. The biological half-life has been reported to be between 7 to 13 hours.

Sodium Sulfacetamide Lotion is indicated in the topical treatment of acne vulgaris.

Sodium Sulfacetamide Lotion is contraindicated for use by patients having known hypersensitivity to sulfonamides or any other component of this preparation (see WARNINGS).

Sodium Sulfacetamide Lotion contains sodium metabisulfite, a sulfite that may cause allergic-type reactions including anaphylactic symptoms and life-threatening or less severe asthmatic episodes in certain susceptible people. The overall prevalence of sulfite sensitivity in the general population is unknown and probably low. Sulfite sensitivity is seen more frequently in asthmatic than in non-asthmatic people (see CONTRAINDICATIONS).

For external use only. Keep away from eyes. If irritation develops, use of the product should be discontinued and appropriate therapy instituted. Patients should be carefully observed for possible local irritation or sensitization during long-term therapy. Hypersensitivity reactions may occur when a sulfonamide is readministered irrespective of the route of administration, and cross-sensitivity between different sulfonamides may occur. Sodium sulfacetamide can cause reddening and scaling of the skin. Particular caution should be employed if areas of involved skin to be treated are denuded or abraded.

Long-term studies in animals have not been performed to evaluate carcinogenic potential.

Safety and effectiveness in pediatric patients under the age of 12 have not been established. 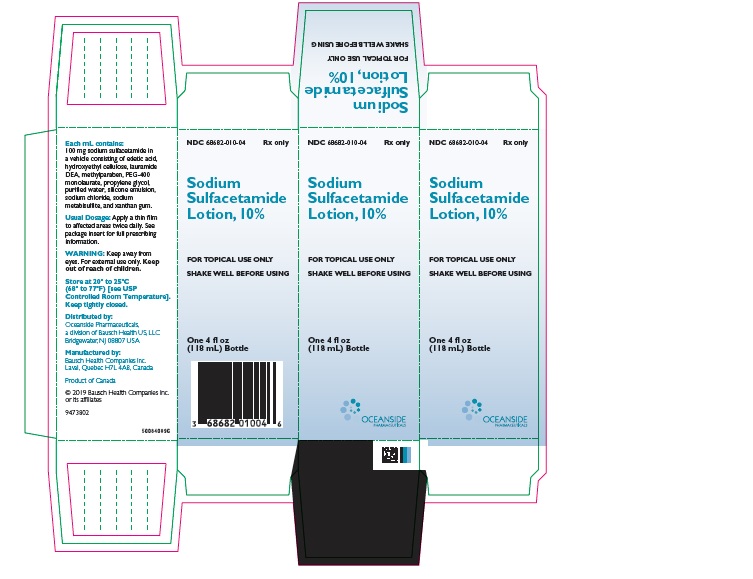